ASU alumna taps into personal history to help others

For Adisa Podrug, an alumna of Arizona State University’s College of Liberal Arts and Sciences, justice was a concept learned early on.

Her family left their native Bosnia when she was 7 years old, just as the country was coming out of a brutal civil war. Growing up in Arizona, she saw her parents relive painful memories as they watched the conflict’s International Criminal Court trials broadcast from The Hague, and heard from cousins about the devastation left behind. 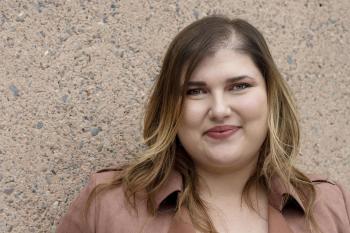 “I felt sort of phony being in the U.S. and having all the privileges that come with that, while knowing my cousins in Bosnia didn’t have the same luxury,” she said. “It made me want to be a helping hand in the problems of the world.”

Coming to ASU, she found ways to put those feelings into action and help others do the same.

Podrug graduated last December with concurrent undergraduate degrees from the T. Denny Sanford School of Social and Family Dynamics and the School of Politics and Global Studies.

But she was familiar with ASU long before becoming a student. She spent several years preparing for the moment while enrolled in Upward Bound, a federal program providing mentoring, tutoring and scholarships to low-income families and first-generation students in Arizona.

Podrug’s family belonged to both categories. So, following in the footsteps of her two older siblings, she began attending after-school sessions in high school.

At first, her shyness made it hard to feel comfortable. But things changed as she realized other students were facing similar issues.

“We were kind of all in a space where our families were just getting settled in here,” she said. “That support really helped me come out of my shell.”

Through the TRIO program, ASU collaborates with Upward Bound in high schools across Maricopa County to help students prepare for college with scholarships and summer visitation programs on campus. Podrug obtained funding through the program, which allowed her to attend ASU after high school.

Once on campus, Podrug dove into exploring the real-world applications of a longtime drive to help spur change, starting with Upward Bound itself.

She headed back to the program’s classrooms, this time as a tutor, working with a new batch of first-generation students and their parents. Being on the other side, she wanted to make sure other participants could leverage the TRIO's potential the same way she had.

“It took me a while to open up when I was in high school, so I wanted to make sure others like that succeeded,” she said. “I really tried to make sure they knew I was there for them, no matter what.”

Podrug wanted to apply the same diligence to work outside Arizona. That was the impetus behind her 2018 study abroad internship with the Hibiscus Initiative, a London-based organization supporting human trafficking victims and other at-risk groups. Coordinating workshops and literacy courses for mothers and their babies, she was inspired by the resilience of her colleagues and the families they helped. When organization leaders approached her at the program’s end with an open invitation to come back, she felt like her work had been noticed, too.

“That meant so much to me — feeling like I had made a difference,” she said. “It was hard leaving friends and family back in Arizona, so it was important to have it all mean something.”

Those efforts were commemorated last fall, when Podrug was named a College of Liberal Arts and Sciences Dean’s Medalist ahead of graduation.

“Adisa has impressed us with her keen sense of cultural awareness,” said Richard Herrera, associate director of the School of Politics and Global Studies, in the school’s nomination letter for Podrug. “She has cultivated her academic work with experiences that emphasize helping those less fortunate than herself, with a particular interest in women and children.”

Podrug said she’d eventually like to pursue a career working to advance human rights causes internationally, including back in Bosnia. But she’s also focused locally. Today, she draws on her experience with Upward Bound and her family development courses at ASU while teaching elementary students at Phoenix’s Montessori Villa School.

“(The combination) helped me to implement teaching strategies and the overall understanding that empathy and consistency is needed when dealing with children, especially during this stage in their lives,” she said.

Arizona State Director of Football Video Alex Hodge was named the 2018-19 Pac-12 Conference Video Coordinator of the Year by the Collegiate Sports Video Association, as was announced Feb. 24. ... Arizona State Director of Football Video Alex Hodge was named the 2018-19 Pac-12 Conference Video Coordinator of the Year by the Collegiate Sports Video Association, as was announced Feb. 24.