“The Geoscience Alliance has been important for many years for its unique and far-ranging mission of mentoring and supporting Native American and other indigenous students and professionals in the geosciences,” said ASU School of Earth and Space Exploration Professor and geologist Steven Semken, who served as host for the conference. 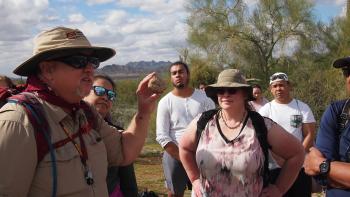 The alliance has long had an active presence at annual meetings of much larger professional organizations like the American Geophysical Union and the Geological Society of America, but its own national conference, held every few years, has the greatest impact on the stakeholder community overall. This year’s conference included 160 attendees for the three-day conference, which included workshops, breakout sessions, invited speakers and a poster session.

Ángel Garcia, who earned his PhD in geosciences from ASU earlier this year and is currently a visiting assistant professor at James Madison University in Virginia, was one of the conference’s returning attendees and is also on the conference planning committee.

Garcia first attended the Geoscience Alliance in 2015 when he was a graduate student at ASU. He learned about the conference from SemkenSemken is also a senior sustainability scientist in the Julie Ann Wrigley Global Institute of Sustainability, and a faculty affiliate of the Center for Education through Exploration and the Global Drylands Center at ASU., who suggested that it would be a good way to develop networks in the geosciences with people who were interested in multicultural topics and indigenous cultures.

“People from tribal lands have a strong connection to places,” said Garcia, who is Puerto Rican and Dominican. “We might first describe what tribe we are from, but then refer to a specific place within our tribal lands where we grew up and have family. Connections to those places go back generations for us.”

For Garcia and other participants, one of the best parts of the conference is making connections, networking with other scientists and meeting other students in the geosciences.

“These conferences give us an opportunity to learn from people with a similar culture and background,” said Garcia.

“At the Geoscience Alliance, I felt included right from the start. Now every time I see this group of people at other conferences we identify ourselves as members of the alliance, both as students and professionals.” 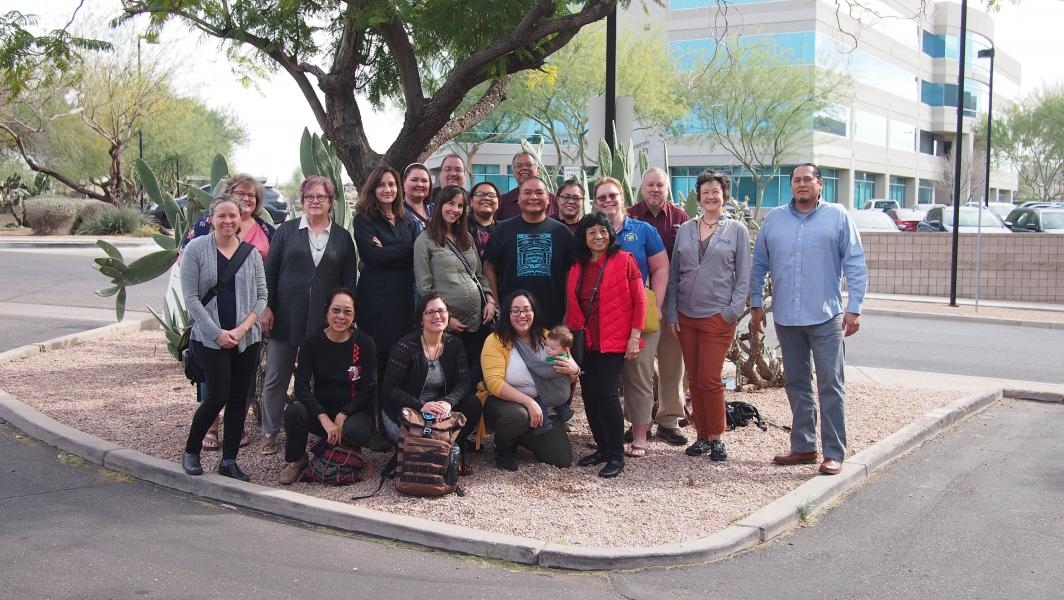 Members of the Geoscience Alliance Conference Planning Committee on the ASU Tempe Campus. At the Geoscience Alliance poster session where Margaret Rudolf shares her research on educational outreach with conference attendees. 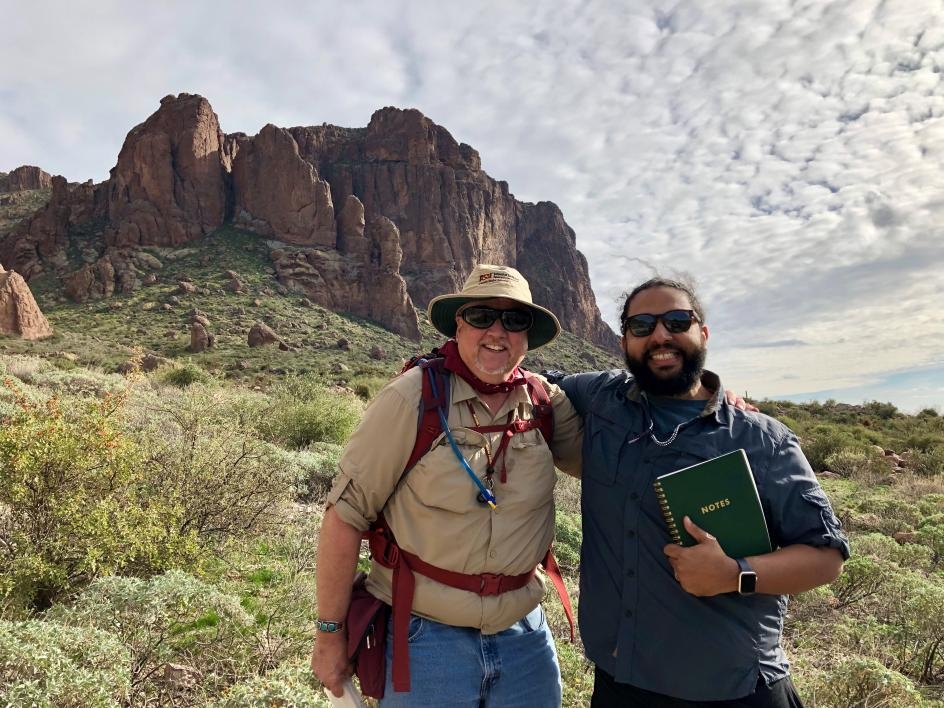 Since the first conference, the alliance has adopted the practice of “talking circles” from Native American ceremonies.

“We develop questions, break up into small groups and make sure each person gets a chance to talk,” explained Diana Dalbotten, who is on the alliance conference planning committee and is a diversity director at the University of Minnesota. “We have developed this to make our conference more participatory and to respect the idea that everyone is there to teach and everyone is there to learn.”

Conference attendees were also invited on several diverse field-trip opportunities related to different aspects of the geosciences, including a trip to the Superstition Mountains, the Heard Museum and Biosphere 2.

On the last night of the conference, attendees were asked to participate in a “science pop-up night” where everyone could spend three minutes talking about their projects and research. This event was so popular that even though it was the last day of the conference, it went well into the night.

“It’s important for ASU to host events that focus on local communities in Arizona and especially indigenous communities in the Southwest,” said Garcia. “Giving teachers, researchers, professors and students the opportunity to share knowledge and connection to the land shows that ASU embraces diversity.”

The conference organizers, including Semken and Garcia, hope that participants will seek more collaboration with each other in the future as a result of this conference. Garcia, for example, is working with two other researchers he met through the alliance on a National Science Foundation proposal to study the geology of caves in the Caribbean.

They also hope to continue to offer travel awards to the conference.

“Some of us come from places that are not financially stable, making conferences like this out of reach,” said Garcia. “But thanks to sponsors like the National Science Foundation, the alliance is able to provide the opportunity to those who otherwise would not be able to go.”

Previous conferences were held in the northern Midwest, the northern Rocky Mountains and the Pacific Northwest.

“It was an honor for ASU to host this most recent conference in Phoenix and Tempe,” said Semken. “I think that the alliance members enjoyed their visit to our campus and their time in the warm desert sun.”

Semken is grateful for the support given to this endeavor by many colleagues in the School of Earth and Space Exploration; the ASU President's Special Advisor for American Indian Initiatives Bryan Brayboy; ASU Vice President for Tribal Relations Jacob Moore and his staff; and to ASU alumna (and a former graduate student of Semken’s) Nievita Bueno Watts, who is the co-director of the Geoscience Alliance.

The Geoscience Alliance is a national alliance of individuals committed to broadening participation of Native Americans in the geosciences. Its members are tribal colleges, universities, research centers, Native elders and community members, students and educators.

The Geoscience Alliance conferences are made possible through the generous and ongoing support of the National Science Foundation and the National Aeronautics and Space Administration.

David Boies, one of the nation’s top litigators, is described by The New York Times as “the most prominent lawyer in America.” He is coming to Phoenix this week as part of the Bruce E. Meyerson lecture series hosted by the Sandra Day O’Connor College of Law at Arizona State University. The lecture, titled “Litigation in the Age of Settlement,” will begin at 7 p.m. Wednesday, Feb. 20, a...

David Boies, one of the nation’s top litigators, is described by The New York Times as “the most prominent lawyer in America.” He is coming to Phoenix this week as part of the Bruce E. Meyerson lecture series hosted by the Sandra Day O’Connor College of Law at Arizona State University. The lecture, titled “Litigation in the Age of Settlement,” will begin at 7 p.m. Wednesday, Feb. 20, at the Beus Center for Law and Society in downtown Phoenix.

Boies has played a central role in some of the nation’s most notable cases, including: 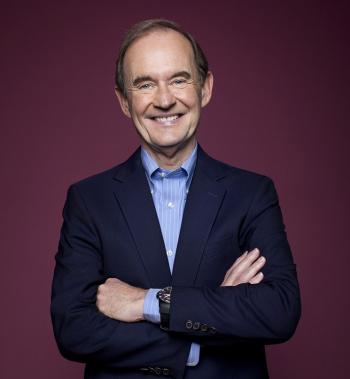 Boies began his career at Cravath, Swaine & Moore in 1966, working there for three decades before starting his own firm in 1997, Boies, Schiller & Flexner LLP. In the course of his career, the legal landscape has shifted dramatically, which his lecture will touch on.

“Many more cases are settled today than were when I started practicing law,” he said. “I think that has to do with a number of factors, but I think that anybody who has watched the practice of law develop over the last half-century will tell you that trials are much less prevalent today as a means of resolving disputes.”

Boies points to another, more positive reason for the shift toward settlements: alternative dispute resolution. With more options available, guided settlements, either through mediation or just bilateral settlements, have become much more common.

This lecture series is the result of a gift to the Sandra Day O'Connor College of Law at Arizona State University from retired Judge Bruce E. Meyerson and his wife, Mary Ellen Simonson, an ASU Law alumna. The purpose of the lecture series is to bring to ASU Law leading practitioners and scholars in the field of dispute resolution.