For Sister Donna Moses, a member of the Dominican Sisters of Mission San Jose, a certificate, an associate degree, two bachelor’s degrees, a master’s degree and a doctorate was not enough. She had already studied English, German, education and religious studies and is now enrolled in the online history Master of Arts program in the School of Historical, Philosophical and Religious Studies at Arizona State University.

“I want to study historical methodology to improve my skill as a historian,” said Moses. “I am working on several historical projects related to the history of the Catholic Church in America and the application of Catholic social teaching in American foreign policy.” 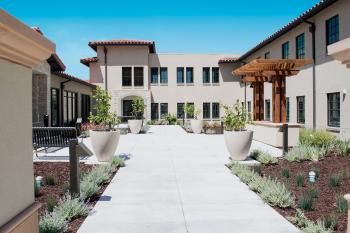 The courtyard of Mission San Jose, the mission where the Dominican Sisters congregate. Download Full Image

After receiving her bachelor’s degrees in 1977 and before entering a life of religion, Moses was commissioned in 1985 as an ensign in the U.S. Naval Reserves while pursuing her master’s degree. She served five years in Portland, Maine, starting out as a naval control of shipping officer but was promoted to lieutenant after three years.

Moses served a total of 20 years in the Navy before retiring in 2005. She received many honors and awards during her years of service including the National Defense Service Medal in 1991 for her duties in support of Operation Desert Storm, the Armed Forces Reserve Medal for her work as a logistics officer on the midwatch in Chinhae, South Korea, and the Navy Meritorious Service Medal in 2005 when she retired as lieutenant commander.

“In the Naval Reserves, I did logistical work for Naval Coordination of Shipping, promulgating safe routes and communications for merchant ships in time of war or hostile activity,” said Moses. “When I became a religious, the Navy transferred me to the chaplains unit where I did logistics for chaplains on the ground in Kuwait.”

In 2006, Moses became a perpetually professed Dominican Sister of Mission San Jose in California and was their webmaster and director of information technology while also taking on the role of webmaster and coordinator for the Mariological Society of America, a Catholic theological association. She worked in these positions until 2013, when she was commissioned by the National Association of Catholic Chaplains to work in a large county hospital in San Jose.

She attributes her leadership skills to her time in the Navy, saying it laid the foundation for her work now as a chaplain and multi-faith spiritual care coordinator at the Santa Clara Valley Medical Center. In the center she cares for 575 patients and 6,800 employees in a Level I trauma center and 60-bed locked psychiatric facility and outpatient clinics.

“Obviously, I don't do this alone,” said Moses. “Most of the time I provide inspiration, attend the dying and bring a peaceful presence to stressful situations. I also work with the Palliative Care Team, the Medical Ethics Committee and the Crisis Administration Leadership Management Team.”

While caring for patients, Moses has found time to conduct research for the Order of Preachers in the U.S. Initially, she was recording the history of the Dominican Order in the U.S. focusing on the foreign missions of religious women from the U.S.

Her research has been compiled into a book, “American Catholic Women Religious: Radicalized by Mission,” which was published last year. The book was compiled based on both oral history and archival research collected from eight congregational archives.

“The book took five years to complete and tells how the mission work of the sisters was impacted by foreign policy decisions of the Vatican and the U.S. government,” said Moses. 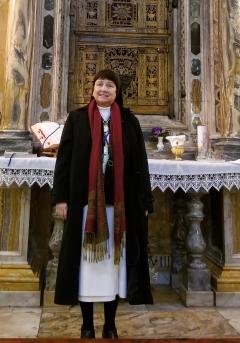 After completing her book, Moses enrolled in her first round of classes in the online history program at ASU and attended the American Historical Association’s annual meeting in early January before her first semester of classes had even started.

“I was impressed by the rich variety of excellent presentations with hundreds of choices per day,” said Moses. “I presented chapter two of my book and attended five presentations by friends and colleagues. I enjoyed all the talks I attended and the opportunity to hang with other historians. The camaraderie was great.”

Moses posted a message on the ASU online history Facebook group after she finished presenting her paper only to get a reply that she should look for Matthew Casey, clinical assistant history professor and associate director of online programs in the School of Historical, Philosophical and Religious Studies. She would not start her first class for another few days after the meeting, but wanted to meet a professor in the program anyway.

“It was a nice springboard into the program,” said Moses. “Seeing Professor Casey at AHA reinforces my belief that ASU can help me to grow as a professional historian and support my research.”

Casey does not have Moses enrolled in any of his classes this semester, but as a student on the Global History track, she will take a class with him next year.

It’s hard enough to build a community among on-campus students, so creating a place for online students to develop relationships can seem nearly impossible at times. Yet, the online MA history program takes extra steps — such as the Facebook group — to bring everyone closer so they can have a cohort of their own.

“Donna comes to us having already enjoyed an accomplished career as a historian,” said Casey. “For me, as a scholar of Catholicism, it is especially exciting to have the opportunity to work with Donna, who has a wealth of experience both as a Dominican sister and as a researcher of church history. I am excited to see how she engages with her peers, many of whom will greatly benefit from Donna's expertise and skills.”

The history MA online program has received accolades in publications like U.S. News and World Report, which was one reason Moses chose to attend ASU. Another reason was because the program is asynchronous. She is able to conduct her coursework and studies around her ministry schedule at the hospital, prayers and community life.

Despite just starting the master’s program, Moses has an idea for what she wants to do when she completes her degree.

“I will continue to research and publish articles and books that highlight the role of American Catholic women and Catholic social teaching in American and global history,” said Moses.

Michelle Memran met playwright Maria Irene Fornes two decades ago. The plan was to interview Fornes, who has been called the greatest and least-known dramatist of our time, for an article on the relationship between playwrights and critics. The result was a long-lasting friendship and an award-winning feature documentary, which Memran will screen March 14 at FilmBar in Phoenix.“Just as Irene did...

Michelle Memran met playwright Maria Irene Fornes two decades ago. The plan was to interview Fornes, who has been called the greatest and least-known dramatist of our time, for an article on the relationship between playwrights and critics. The result was a long-lasting friendship and an award-winning feature documentary, which Memran will screen March 14 at FilmBar in Phoenix. 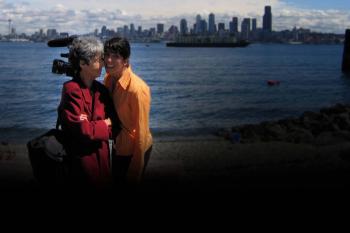 “Irene’s response to the camera and my response to filming her was a beautiful surprise for us both,” Memran said. “Initially the film was our way to keep the creative process alive in each of us, and the process­­ — at least at the time­­ — was very much the product.”

Fornes had written more than 40 plays, won nine OBIE awards and mentored thousands of playwrights across the globe. But she had stopped writing due to memory loss and was suffering from undiagnosed Alzheimer’s disease. “The Rest I Make Up” follows Fornes and her memories, weaving together the present with the past, all the while “moving mentor and student toward an ever-deepening connection in the face of forgetting.”

“Today I am able to see clearly the reason I stayed committed to the project years after I stopped filming (due to Irene’s advancing dementia),” Memran said. “The reason I kept working with the tapes, combing through hundreds of hours of footage, was because there was a story I had to tell. Eventually I met an editor­­ — Melissa Neidich­­ — who cared as deeply for the material as I did, and what we unearthed was a story about the power of friendship and creativity, and what it means to remain an artist through all the vicissitudes of one’s life.”

The film premiered one year ago at the Museum of Modern Art’s Doc Fortnight 2018 in New York, and since then it has won numerous awards, including AARP's inaugural Silver Image Award for a film that "exceptionally portrays an individual 50+ who is multidimensional and defies stereotypes." The New Yorker’s Richard Brody named it one of the best movies of 2018 and in his review wrote, “The resulting film is a profound, tragic, yet joyful vision of art. It’s more than the portrait of an artist (or even of two); it’s a revelation and exaltation of the artistic essence, of the very nature of an artist’s life as an unending act of creation in itself.”

The ASU School of Film, Dance and Theatre and the Virginia G. Piper Center for Creative Writing are hosting a screening of "The Rest I Make Up," at 6:30 p.m. March 14 at FilmBar in Phoenix. Memran will be in attendance and give a talk at the screening.

The Desert Southwest Chapter of the Alzheimer's Association also will be at the event to answer questions and give information about the local chapter.

This event is free and open to the public, but registration for a free ticket is encouraged. If space allows for walk-ups, they will be accommodated on the night of the event.