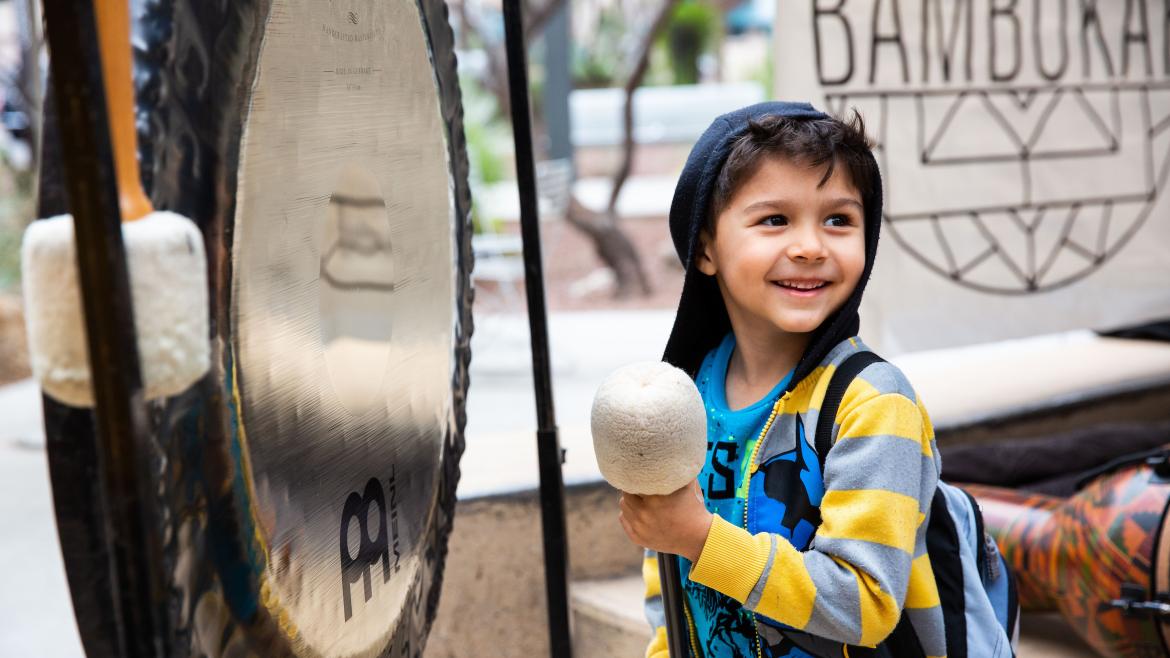 The fun kept rolling Saturday with the second of Arizona State University's Open Door events, where members of the community were invited to check out the exciting work being done by the schools and units of the Downtown Phoenix campus.

Visitors to the campus learned about drone piloting, had a chance to hold a sheep brain, crafted origami cats, got hearing screenings, saw a Van de Graaff generator in action and uncovered the wonders of DNA. Azalia Yazzie speeds down the big slide at Civic Space Park during the 2019 Downtown Phoenix campus Open Door on Feb. 9. 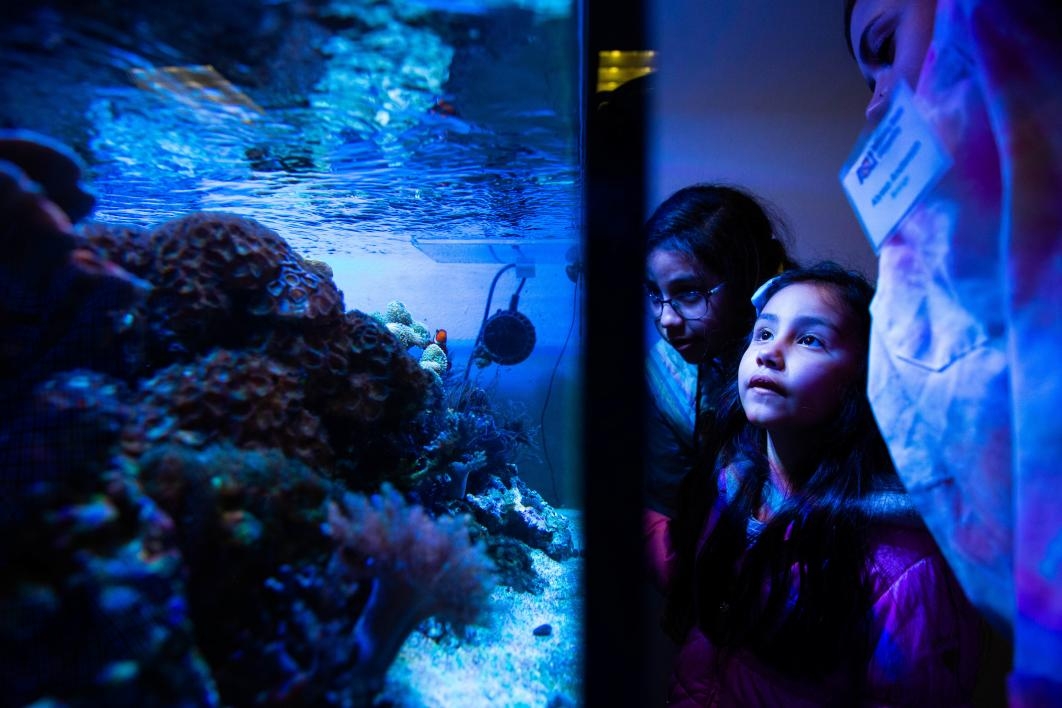 From left: Emily Reza and her sister Casey listen to Alyssa Anderson, health sciences senior in the College of Health Solutions, as she explains the different life in the salt water tank during Open Door. 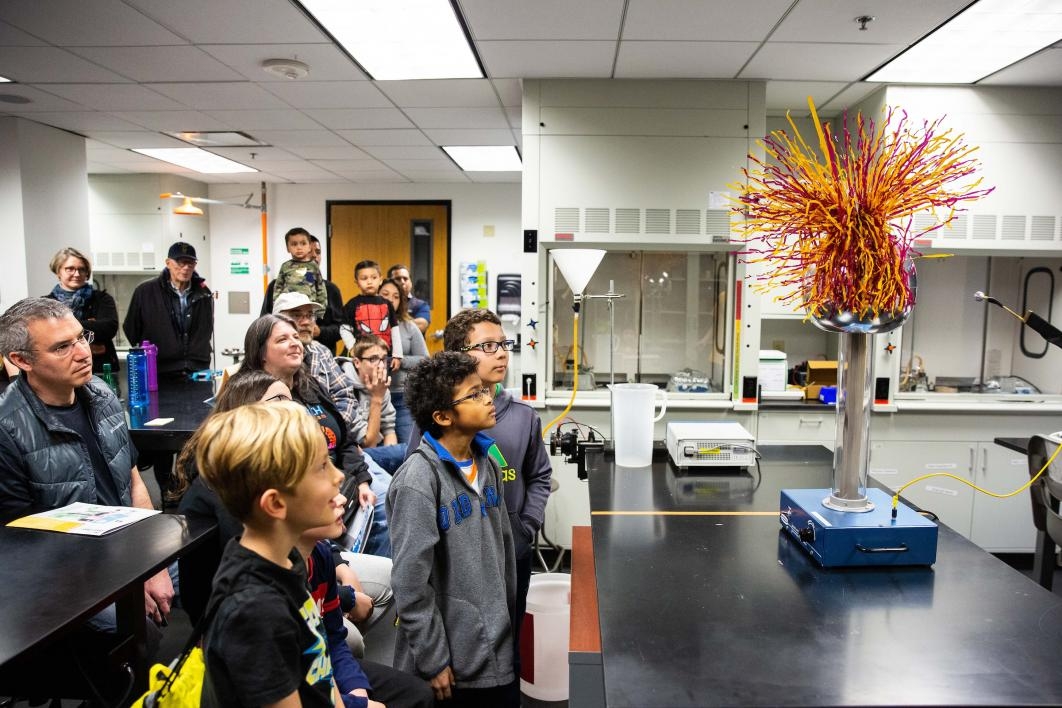 Kids and parents learn about static electricity with the Van de Graaff generator during the 2019 Downtown Phoenix campus Open Door. From left: ASU alumni Dani Carloni and her sister Allie Carloni learn about fingerprints and that they have "plain loops," the most common type. Stephanie Martin and her daughter Julie pose for a "booking" photo at the ASU Police Department booth. 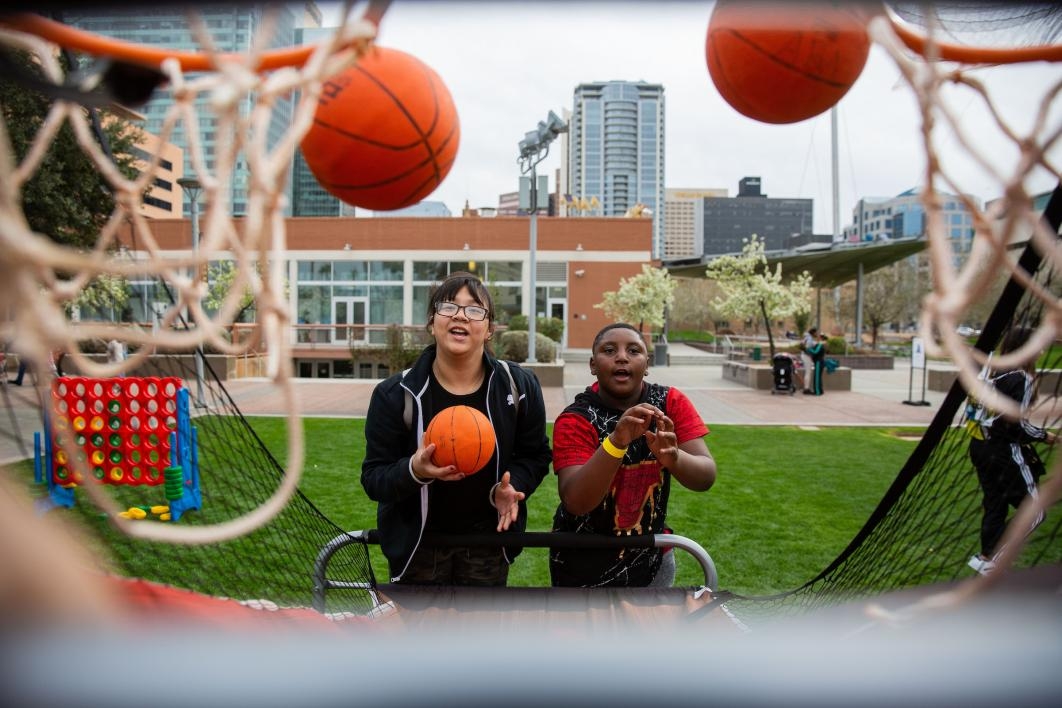 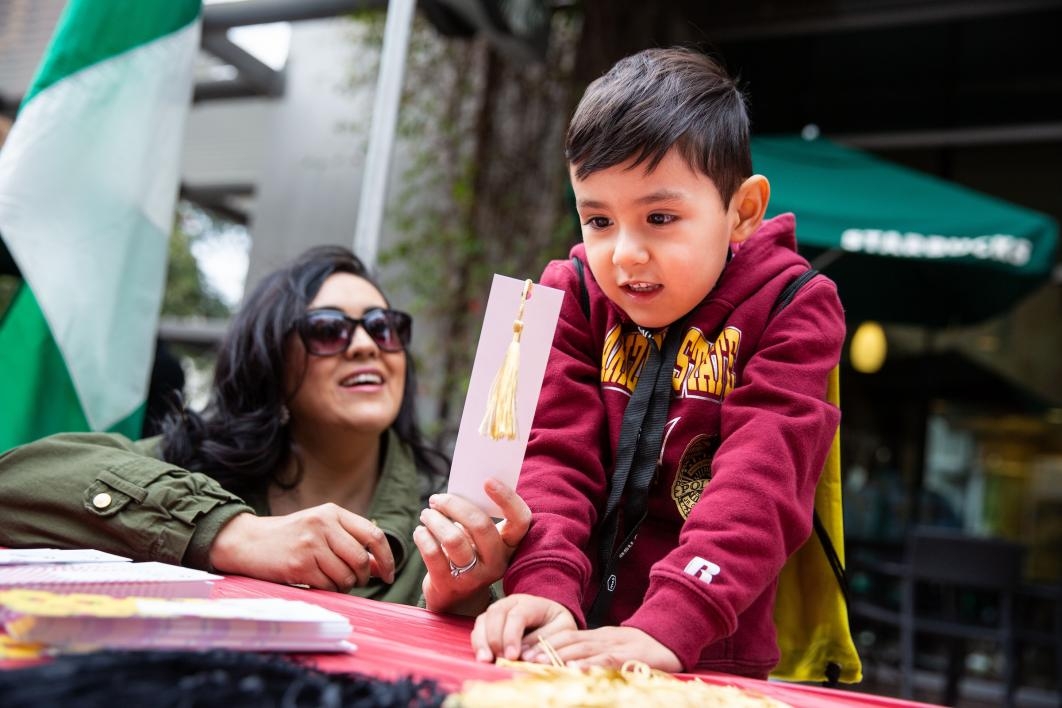 LeAnn Holguin and her son Ezra Holguin get their names written in Arabic on a bookmark at Open Door. 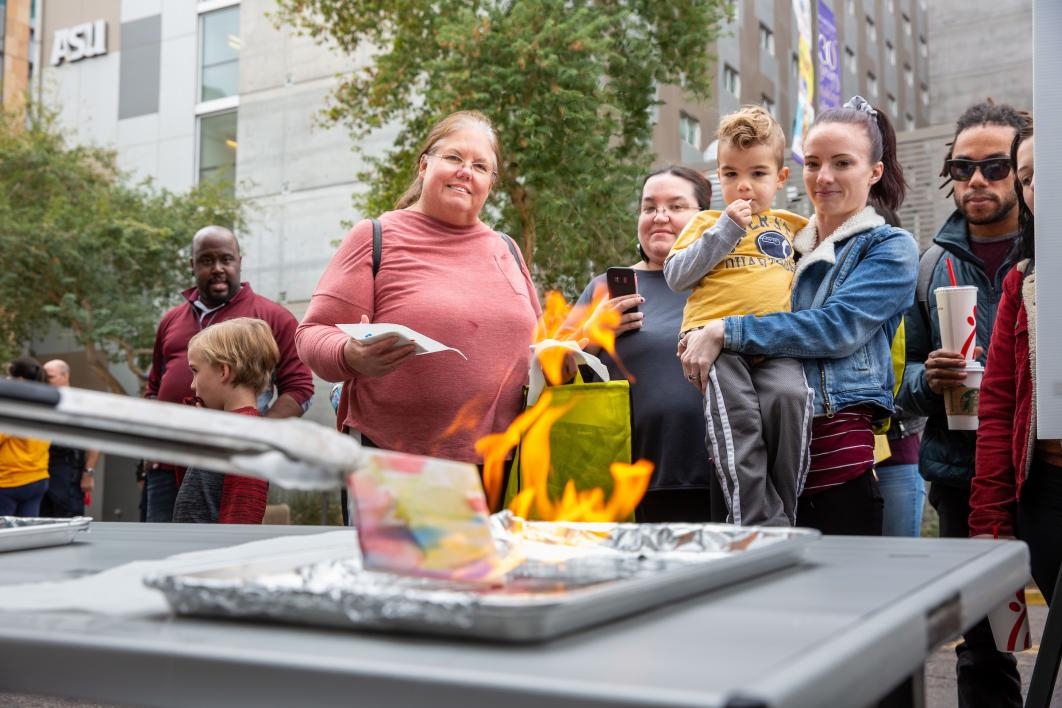 From left: Margaret Boivin, Cathy Boivin, Logan McDaniel and her son Bryce, and Anthony McDoyle watch as their tile craft is set on fire to cure. Katie Havard holds a sheep brain at the booth of the Autism and Brain Aging Laboratory during Open Door. 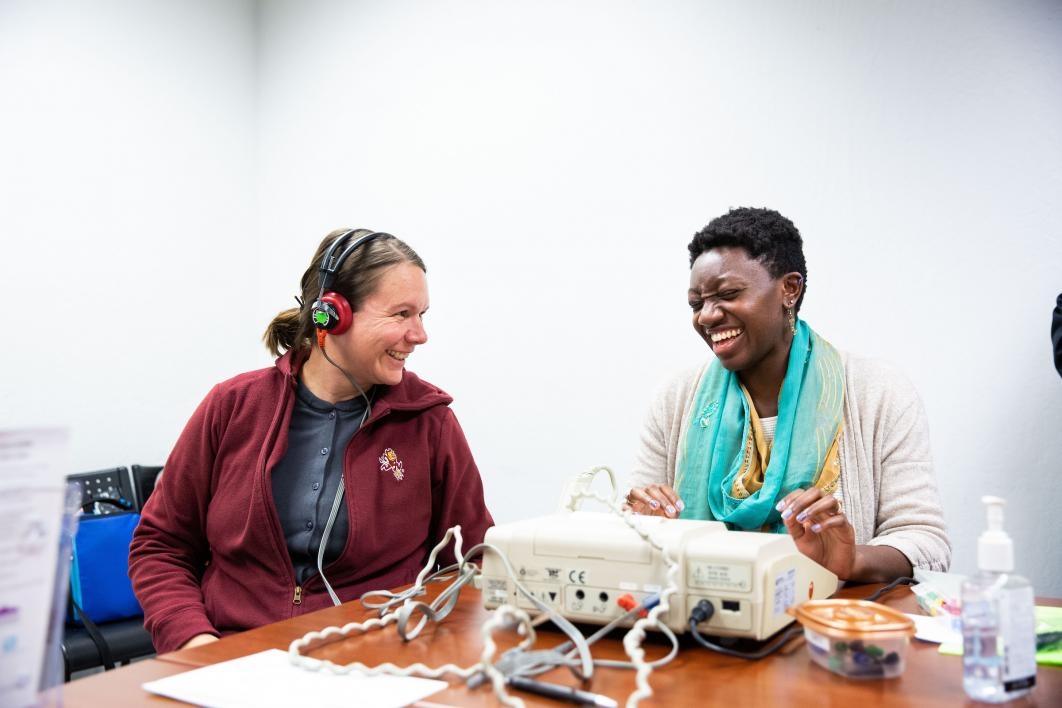 ASU alumna Jana Reisslein (left) listens through headphones as she goes through a hearing test with Master of Science in communication disorders student Nicole Flournory at the College of Health Solutions. 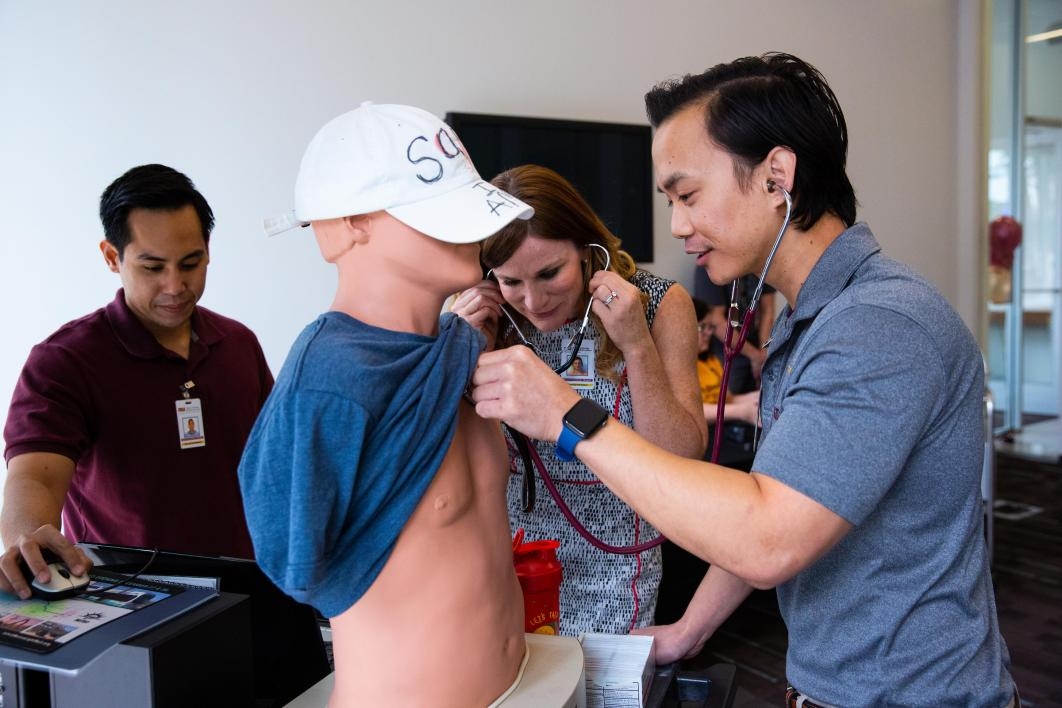 Graham Sawicki listens to the "heart beat" of a Student Auscultation Manikin along with fellow Doctor of Nursing Practice students Amanda McFarland and Rey Manalese at Health North. 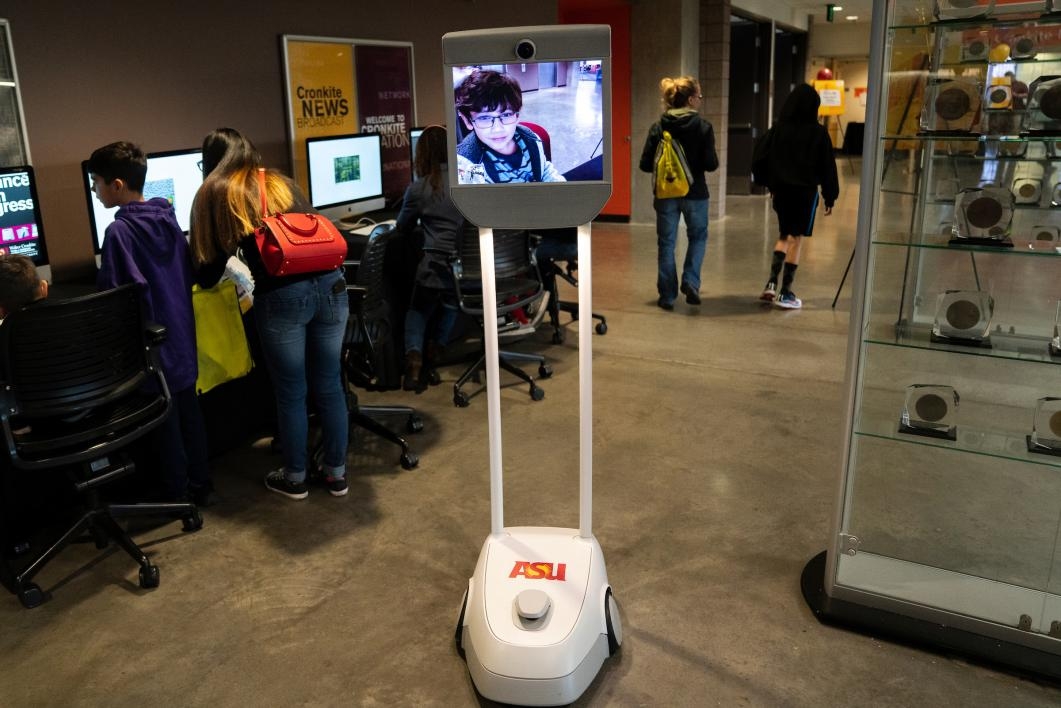 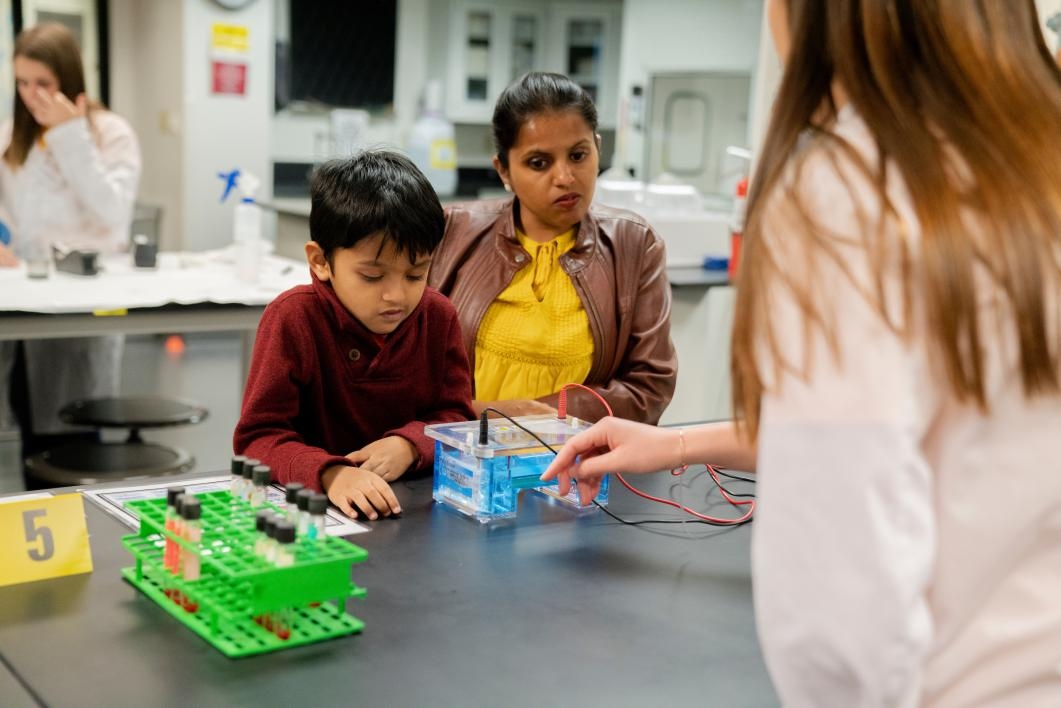 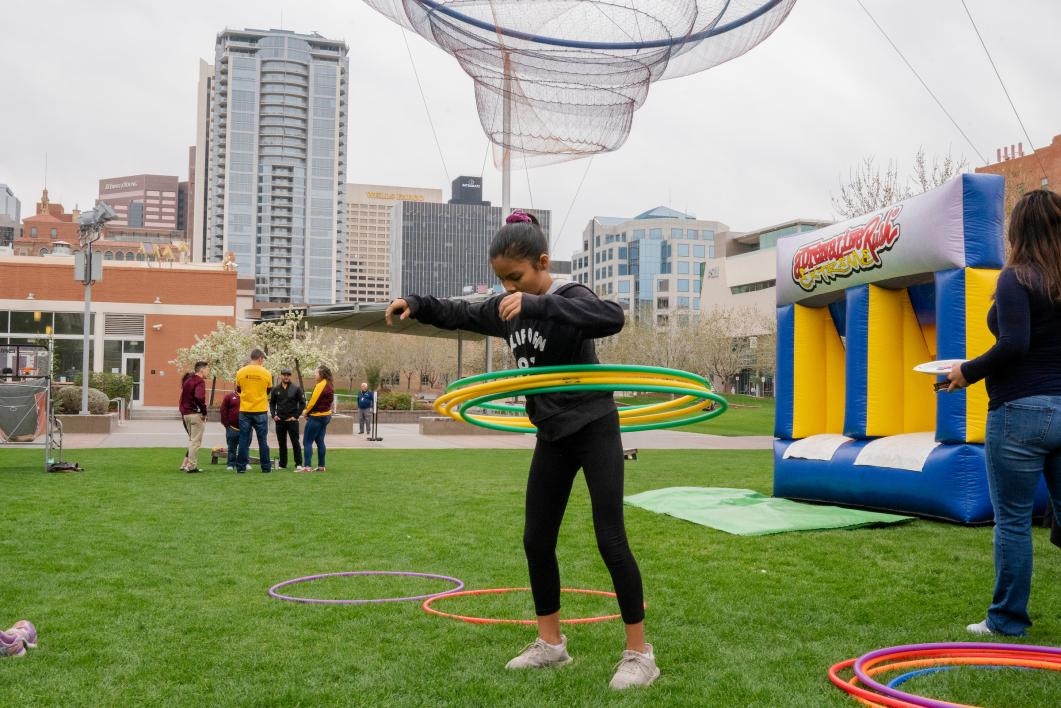 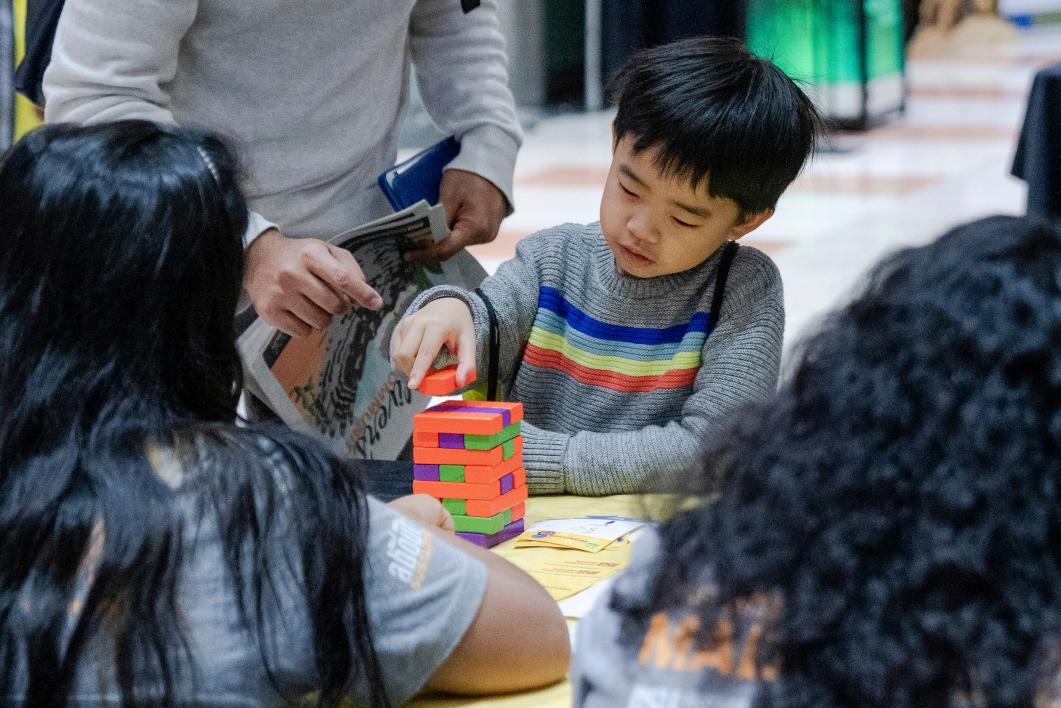 If you missed out, don't worry: There are two more free Open Door events:

Read more about what's in store at each campus here, including information on the free app that can help visitors map out the activities they want to visit. Get free tickets in advance online.

Citing the startling advances in semiconductor technology of the time, Intel co-founder Gordon Moore in 1965 proposed that the number of transistors on a chip would double each year — the accuracy of that observation has been borne out. Still, it’s unlikely Moore could have foreseen the extent of the electronics revolution currently underway.Today, a new breed of devices that bear unique prope...

Citing the startling advances in semiconductor technology of the time, Intel co-founder Gordon Moore in 1965 proposed that the number of transistors on a chip would double each year — the accuracy of that observation has been borne out. Still, it’s unlikely Moore could have foreseen the extent of the electronics revolution currently underway.

Today, a new breed of devices that bear unique properties is being developed. As ultra-miniaturization continues apace, researchers have begun to explore the intersection of physical and chemical properties occurring at the molecular scale. 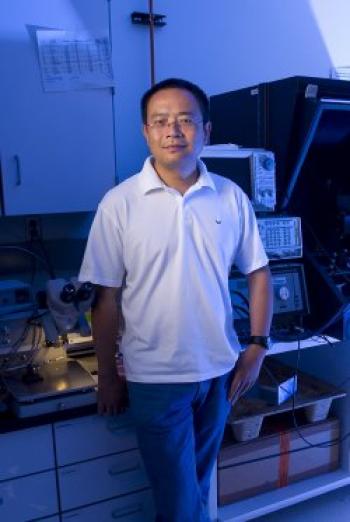 Nongjian “NJ” Tao is the director of the Center for Bioelectronics and Biosensors at the Biodesign Institute and is a professor in the Ira A. Fulton Schools of Engineering at Arizona State University. Download Full Image

Advances in this fast-paced domain could improve devices for data storage and information processing and aid in the development of molecular switches, among other innovations.

Arizona State University's Nongjian “NJ” Tao and his collaborators recently described a series of studies into electrical conductance through single molecules. Creating electronics at this infinitesimal scale presents many challenges. In the world of the ultra-tiny, the peculiar properties of the quantum world hold sway. Here, electrons flowing as current behave like waves and are subject to a phenomenon known as quantum interference. The ability to manipulate this quantum phenomenon could help open the door to new nanoelectronic devices with unusual properties.

“We are interested in not only measuring quantum phenomena in single molecules, but also controlling them. This allows us to understand the basic charge transport in molecular systems and study new device functions,” Tao said.

Tao is the director of the Biodesign Center for Bioelectronics and Biosensors. In research appearing in the journal Nature Materials, Tao and colleagues from Japan, China and the U.K. outline experiments in which a single organic molecule is suspended between a pair of electrodes as a current is passed through the tiny structure.

The researchers explore the charge transport properties through the molecules. They demonstrated that a ghostly wavelike property of electrons — known as quantum interference — can be precisely modulated in two different configurations of the molecule, known as Para and Meta.

Such single-molecule devices could potentially act as transistors, wires, rectifiers, switches or logic gates and may find their way into futuristic applications including superconducting quantum interference devices, quantum cryptography and quantum computing.

For the current study, the molecules — ring-shaped hydrocarbons that can appear in different configurations — were used, as they are among the simplest and most versatile candidates for modeling the behavior of molecular electronics and are ideal for observing quantum interference effects at the nanoscale.

In order to probe the way charge moves through a single molecule, so-called break junction measurements were made. The tests involve the use of a scanning tunneling microscope, or STM. The molecule under study is poised between a gold substrate and the gold tip of the STM device. The tip of the STM is repeatedly brought in and out of contact with the molecule, breaking and reforming the junction while the current passes through each terminal.

Thousands of conductance versus distance traces were recorded, with the particular molecular properties of the two molecules used for the experiments altering the electron flow through the junction. Molecules in the Para configuration showed higher conductance values than molecules of the Meta form, indicating constructive vs. destructive quantum interference in the molecules.

Using a technique known as electrochemical gating, the researchers were able to continuously control the conductance over two orders of magnitude. In the past, altering quantum interference properties required modifications to the charge-carrying molecule used for the device. The current study marks the first occasion of conductance regulation in a single molecule.

The researchers were able to demonstrate good agreement between theoretical calculations and experimental results, indicating that the HOMO and LUMO contributions to the conductance were additive for Para molecules, resulting in constructive interference, and subtractive for Meta, leading to destructive interference, much as waves in water can combine to form a larger wave or cancel one another out, depending on their phase.

While previous theoretical calculations of charge transport through single molecules had been carried out, experimental verification has had to wait for a number of advances in nanotechnology, scanning probe microscopy and methods to form electrically functional connections of molecules to metal surfaces. Now, with the ability to subtly alter conductance through the manipulation of quantum interference, the field of molecular electronics is open to a broad range of innovations.