"Animal House" and "Van Wilder" are fictional accounts of college, yet the role alcohol plays in these two film comedies is rooted in reality and can have consequences that are far from funny.

According to the National Institutes of Health, almost 60 percent of college students ages 18 to 22 drank alcohol in the past month. About 66 percent of students nationwide who drink also engaged in binge drinking, which is five or more drinks in a single setting for men and four or more drinks for women. The effects of alcohol in college often continue beyond the party or the bar: About 1 in 4 students also reported academic consequences from drinking, such as lower grades or missing class entirely. 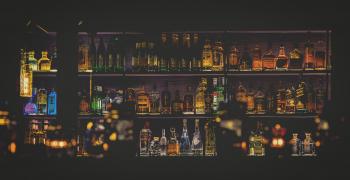 A gift to ASU's Department of Psychology will bring the Brief Alcohol Screening and Intervention for College Students to the ASU campus. Photo by Moss on Unsplash Download Full Image

Because of sobering statistics like these, clinical psychologists in the Arizona State University Department of Psychology are actively working on implementing a new and innovative way to address problem alcohol use in students.

With support from the Robert B. Cialdini Leap Forward Fund, the researchers are bringing the Brief Alcohol Screening and Intervention for College Students (BASICS) to the ASU campus. The BASICS program was created at the University of Washington and is an evidence-based, educational program that addresses problematic alcohol use in college students. Research has repeatedly demonstrated students drink less and experience fewer alcohol-related negative consequences after completing the BASICS program.

Though the program is brief — it consists of two in-person interviews that are about an hour long — it has a high long-term success rate. Four years after participating in the BASICS program, over 67 percent of high-risk college students had improved or resolved their problem drinking behaviors.

“Consequences of risky college drinking include the potential for physical injury, motor vehicle crashes, academic and legal consequences, mental illness, physical and sexual assault, increased suicide attempts and even death," said Matthew Meier, assistant clinical professor and associate director of clinical training in the ASU Department of Psychology. "By offering the BASICS program to ASU students who are at risk for developing alcohol problems, we can prevent many of these negative consequences and create a safer environment on campus and in our surrounding community.”

The two sessions that form the backbone of the BASICS program teach students how to make better decisions about alcohol use by making sure they clearly understand the risks associated with problem drinking. The program also focuses on how to individually motivate each student to change problem drinking habits, develop skills to moderate their drinking and promote healthier choices in general. Students also receive personalized feedback on ways to reduce future risks that could lead to alcohol misuse.

ASU students can voluntarily participate in the BASICS program, or students may be referred by the dean of students, ASU Police or ASU Housing.

During the winter break, the psychology department hosted a BASICS training program led by George Parks, founder and CEO of a private training and consultation firm called Compassionate Pragmatism.

For three days, ASU clinical and counseling psychology, social work and behavioral health graduate students received training on skills and techniques to implement the effective and nonjudgmental BASICS program. Everyone who completed the program with Parks earned a BASICS training certification.

“The BASICS training program allowed our graduate students to be trained how to provide an evidence-based intervention and qualifies them to train others,” Meier said. “This training, and the implementation of the BASICS program, will help make the community as a whole safer by reducing alcohol abuse.”

The Sun Devils notched a win over Western Michigan and dropped their game against Missouri. ... The Sun Devils notched a win over Western Michigan and dropped their game against Missouri.