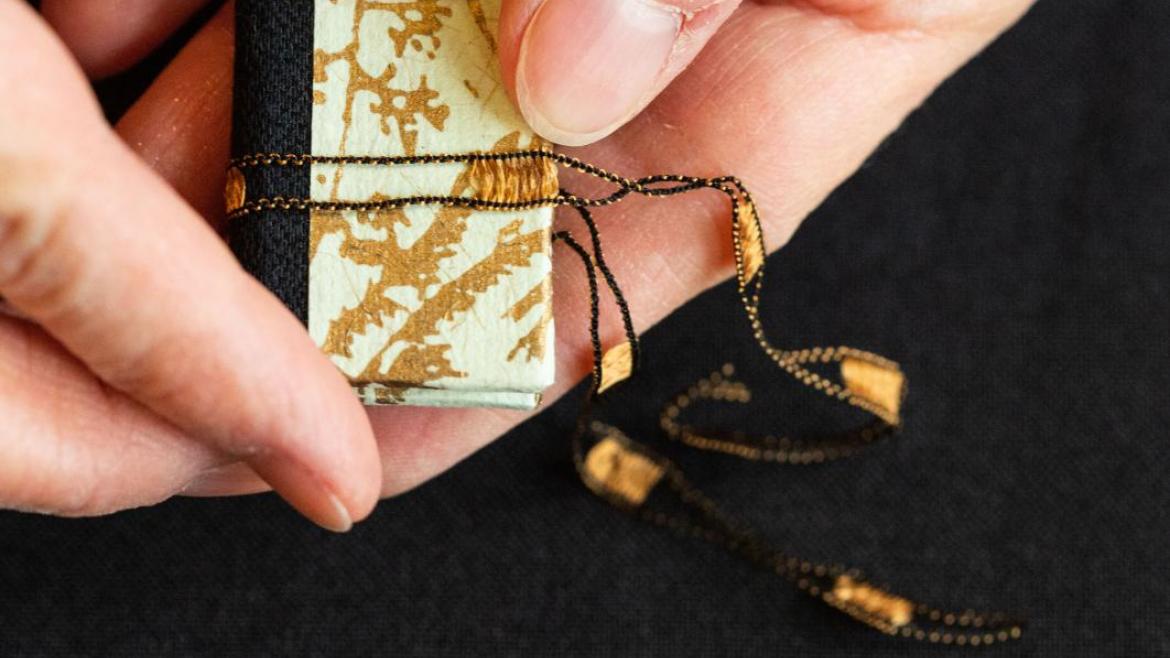 A collection of miniature artist’s books and a limited-edition English translation of poetry by a child Holocaust victim are now available for reading and viewing at ASU Library. The works by book artist, poet and illustrator Kelly M. Houle, a graduate of the Arizona State University creative writing program, were purchased recently via the Department of English’s Lamberts Memorial Rare Book Fund.

“We were delighted to use our funds to acquire Kelly Houle’s work for the ASU Library,” said Krista Ratcliffe, Department of English chair. “The collection of handmade and miniature books ranges on subjects from classic literature to entomological illustration to Holocaust studies and will be of interest to students and researchers in design and printing, book arts, creative writing, history, and literature, among other areas.

“It’s really special to support the work of living artists,” Ratcliffe added. "And being able to collect the work of an alum is a bonus.”

Houle studied poetry at ASU, where she first became interested in book arts. She operates Books of Kell’s Press, a nonprofit dedicated to furthering “artistic beauty and intellectual openness, the ideas and values of Renaissance humanism, through the creation and distribution of small, handmade limited editions, original art and educational materials.” The press also raises funds for organizations that contribute to world literacy.

Keeping with its mission, the press recently completed “A Dream,” one of the volumes acquired by ASU as part of the Houle collection. It is the first English translation of poetry by the young Polish writer and Holocaust victim Abramek Koplowicz, who lived with his family in the Łódź ghetto during World War II. 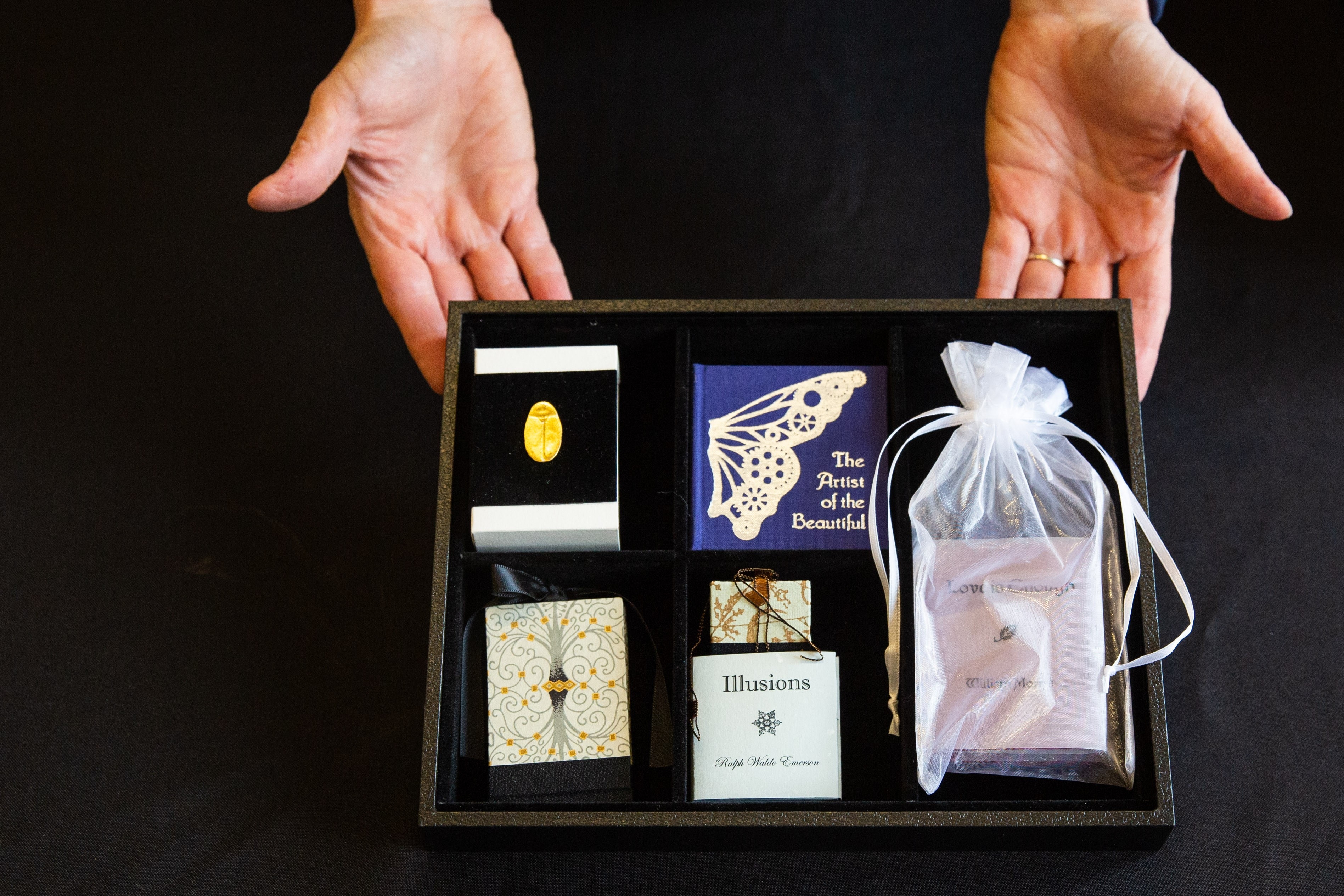 A tray of miniature books created by artist and bookmaker Kelly Houle, an ASU alumna. ASU Library acquired the books for its artist's books collection via the Department of English's Lamberts Memorial Rare Book Fund. 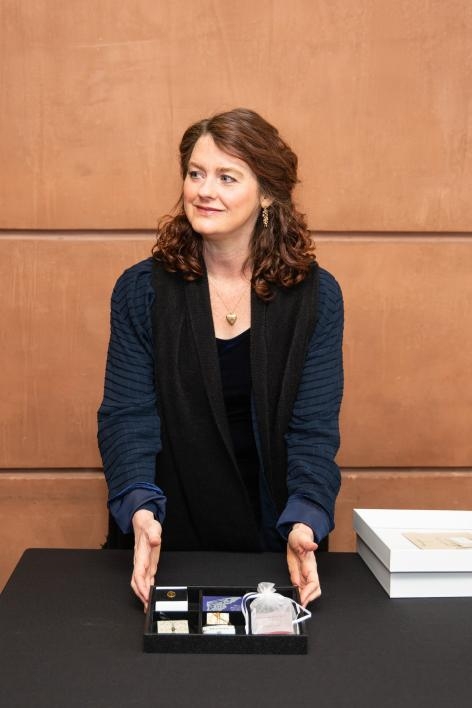 Kelly Houle shows a collection of her miniature artist's books. 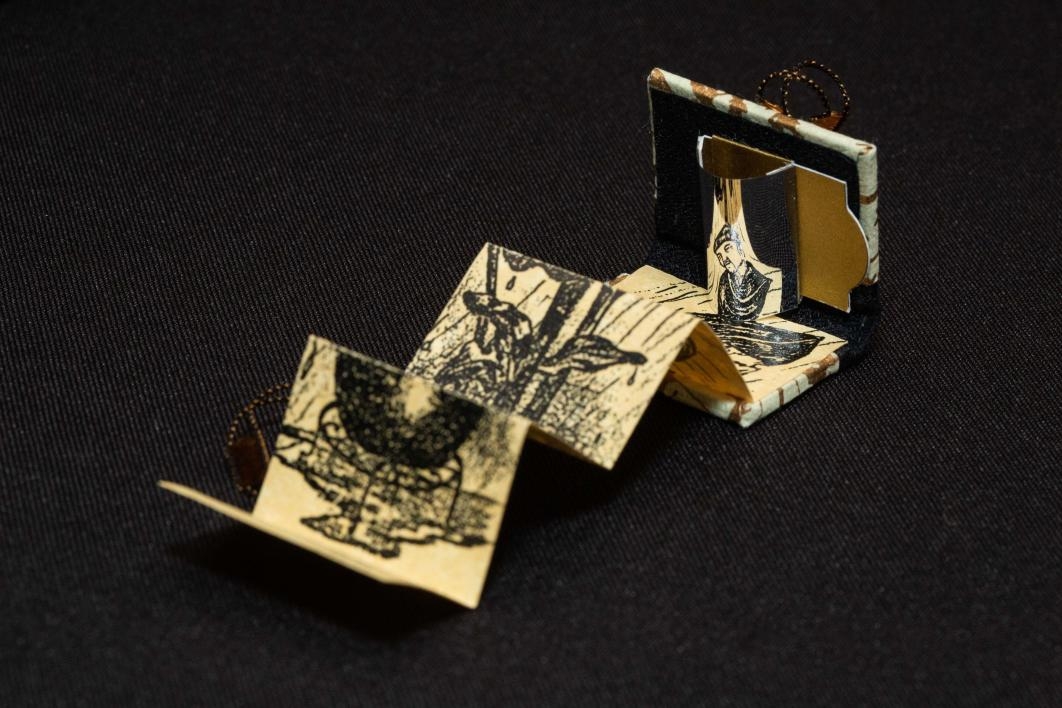 Houle's “Portrait of Basho” utilizes the anamorphic technique, in which a distorted image is "stretched" by a lens to recreate a recognizable image. 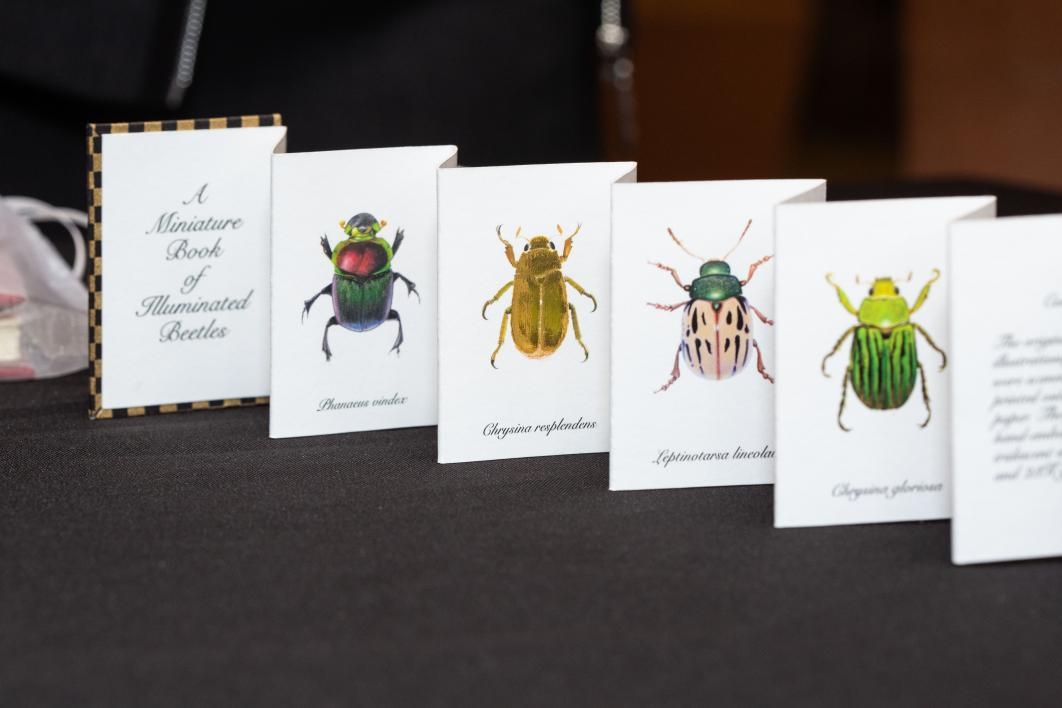 “A Miniature Book of Illuminated Beetles,” Second Printing 2012. Houle, a self-professed "math and science enthusiast," is a member of the Guild of Natural Science Illustrators. 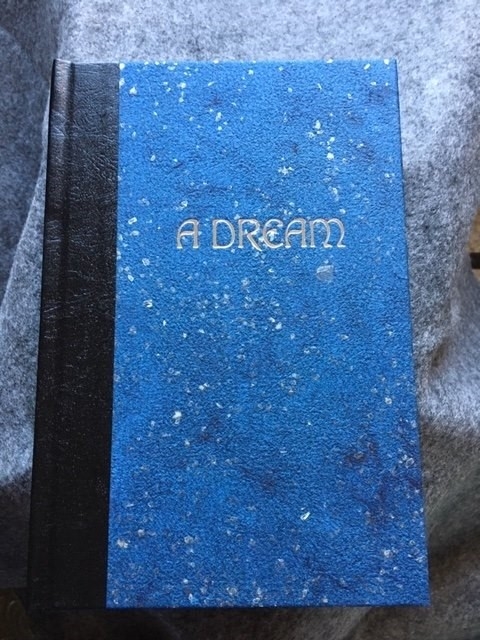 Cover of "A Dream: Selected Poems" by Abramek Koplowicz, designed and illustrated by Kelly Houle, 2019. The is enclosed within a merino wool wrap that fastens with a vintage 1930‘s black button — sewn by Houle's mother.

Forced to work in a shoe factory, Koplowicz entertained himself and those around him with storytelling.

His writings, mostly poems and plays, would outlive the young writer, who died in Auschwitz, along with his mother, when he was 14 years old. Family members saved Koplowicz’s work.

Ratcliffe articulated the need to preserve and contextualize such work. “We recognize the importance of telling the stories of Holocaust victims,” she said. “We believe that keeping these stories in the collective consciousness helps us to remain vigilant against inhumanity. Kelly Houle’s book of translated poetry by a child victim is an important addition to this literature.”

In a collaboration that was local, global and then local again, Houle — who lives in Mesa — conceived, designed and illustrated this limited English edition of “A Dream” in collaboration with translators Sarah Lawson, who lives in London, and Małgorzata Koraszewska, who lives in Poland. The book was letterpress printed at Skyline Type Foundry in Prescott.

Houle was on the ASU Tempe campus Tuesday, Jan. 29 at an event commemorating International Holocaust Remembrance Day. Katherine Kryzs, curator of rare books and manuscripts for ASU Library welcomed attendees, and Alberto Ríos, a Regents’ Professor and director of the Virginia G. Piper Center for Creative Writing, introduced Houle, whom he mentored while she was a student at ASU.

Houle discussed the life of the young poet, Abramek Koplowicz, and the historical context in which he wrote. Danko Sipka, professor and faculty head of German, Romanian and Slavic languages in the School of International Letters and Cultures, performed a reading from the work in the original Polish. Houle then read the same poem's English translation. Houle’s books, as well as selections from the library’s Gerda Weissman and Kurt Klein Papers and Yizkor Books collections, were on display.

The other artist’s books of Houle’s acquired by the library are all miniature editions: “Poem of the Gifts” by Jorge Luis Borges, 2008; “Illusions” by Ralph Waldo Emerson, 2008; “Portrait of Basho,” 2008; “A Miniature Book of Illuminated Beetles,” Second Printing 2012; “The Artist of the Beautiful” by Nathaniel Hawthorne, 2014; and “Love is Enough” by William Morris, 2015.

ASU Library has separately purchased “Gracie’s Gallery,” a children’s pop-up book written and illustrated by Houle utilizing an “anamorphosis” technique as described by Leonardo da Vinci. The book was published by Piggy Toes Press in 2008.

ASU Now asked Houle a few additional questions about the impetus for her book arts projects and what she hopes for the future of the collection. 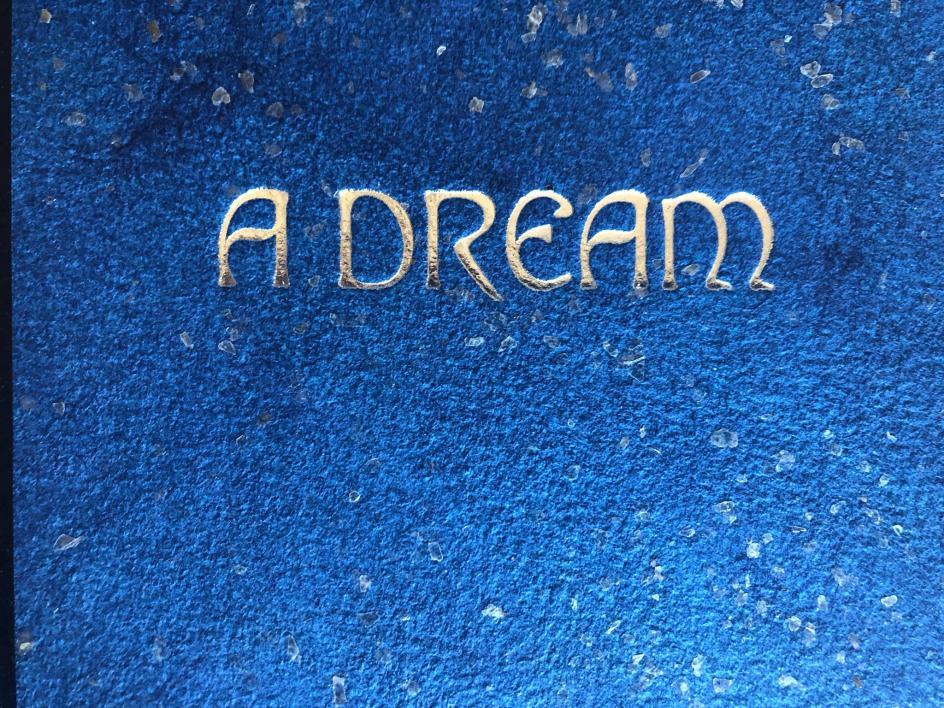 Detail of the cover of "A Dream." The book is bound in deep blue “Starry Night” Cave Paper with mica shard inclusions. Photo courtesy Kelly Houle

Question: How did you learn about the existence of the poems by Abramek Koplowicz and become interested in this project?

Answer: I first read about the poems and the story behind them through my friend, the biologist and author Jerry Coyne. Jerry posted about the poems on his website Why Evolution is True. When I expressed interest in making them into a book, Jerry put me in touch with Małgorzata, who had done the Polish translations of his books. I remember being very moved by the story as it was presented there, and that’s what I hope to share with this book.

Q: Do you have any personal connection to the people or subject matter?

A: Yes and no. My grandfather was one of the first U.S. troops to drive a tank across the Alps during World War II. As part of the 43rd Cavalry he saw the devastation of the war firsthand. He saw things he never wanted to talk about when he returned home. The experience changed him forever, and he suffered with PTSD for the rest of his life. That story has probably affected my interest in this work. I’m not Jewish. I was raised without religion, and so there were no indoctrinated feelings of "us and them" in our home. Science confirms what I instinctually feel when I see any human suffering, which is that we are all cousins. When I look at photos of children in the Holocaust, they seem familiar. I see the humanity in their faces. I see my cousins.

Q: Tell us about the process of engaging with a text of this sort, on such a devastating topic. Did it ever seem too heavy or too much to complete?

A: Yes, the emotional weight of this project did affect the process. There were days I felt I had to force myself to think about it, to read the stories, to look through the photos. It would have been easy to look away, to let it go, but there was always an even greater pull to complete the work, which came from thoughts of Lolek, Abramek’s step-brother. We have kept him in our minds throughout this whole process. It was that, the dedication to Abramek and his story, and the immense responsibility of carrying his words that kept us going.

Q: You have been a science teacher, poet and children’s book author. How did you become interested in book arts?

A: I became interested in book arts during my time in the MFA program at ASU. As a math and science enthusiast, I enjoyed the physical mechanics of books. I designed all of my earlier books with some type of movable or pop-up mechanism. "A Dream" is my first editioned book that doesn’t have anything like that. This book is pure printing and binding. Bookmaking is a way to integrate any subject matter with visual elements: the paper, the illustrations, decorative endpapers. Binding materials into a physical artifact that can be enjoyed as both a visual and tactile object. I think it’s that synthesis of idea and artifact that holds my interest in the book arts.

Q: How do you hope your books will be used now that they will be accessible through ASU Library's distinctive collections?

A: Many of these books are extremely rare, and simply not available to even purchase, so I hope that having a near-complete collection in ASU's distinctive collections will allow students and researchers to handle and experience the books as three-dimensional works of art in a way that viewing photos on the internet doesn't allow.

The Lamberts Memorial Rare Book Fund was named for former ASU professor of English J.J. Lamberts, a linguist who in pre-Internet days hosted a “grammar hotline” from his Tempe home. Lamberts passed away in 1992. Donations from individuals to the fund are used to purchase rare books for ASU Library’s special collections. For more information about how to make a gift to the fund, please visit English’s giving page.

Hollman, Croston and Brinson Pasischnuk tally three-point nights in route to a 6-1 victory ... Hollman, Croston and Brinson Pasischnuk tally three-point nights in route to a 6-1 victory