New America, a nonprofit, nonpartisan think tank, and Arizona State University are producing a new public affairs program on Arizona PBS that will explore public policy and how ideas can be used to shape a better world.

“Innovating the Future” premieres at 7:30 p.m. Friday, Feb. 8, on Arizona PBS. Hosted by New America CEO Anne-Marie Slaughter, the program explores the intersection of new technology and public policy. Each week, Slaughter will interview experts to find out more about complex issues with the aim of improving the quality of democracy in America. 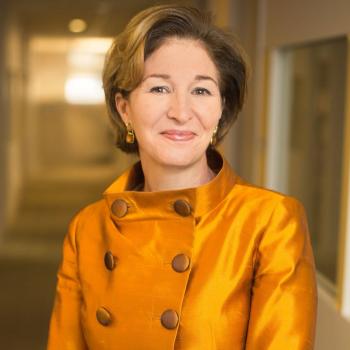 Slaughter will cover a range of topics, including America’s promise of education, how sports can improve society and innovation in local communities.

“America is in fact renewing itself — creating new spaces out of old buildings in downtowns across the country, retrofitting and reinventing factories, farms, families, transportation, schools, and in the case of Arizona State University, higher education itself,” Slaughter said.

“It may be hard to see the outlines of a renewed America through the poisonous clouds of our national politics, but we will show them to you. We won’t sugarcoat our problems. On the contrary, we’ll confront them head on. But we will also be looking for the ideas that will allow us to solve those problems and the optimism and patriotism necessary to move us forward.”

Slaughter has published numerous books as well as more than 100 scholarly articles. She is a contributing editor to the Financial Times and writes a bimonthly column for Project Syndicate. She provides frequent commentary for both mainstream and new media and curates foreign policy news for over 140,000 followers on Twitter. Foreign Policy magazine named her to their annual list of the Top 100 Global Thinkers in 2009, 2010, 2011 and 2012.

Between them, they have produced hundreds of hours of award-winning television across a wide range of platforms, including PBS, CNN, HBO and National Geographic. Hogan and Bergen serve as the show’s executive producers.

“We’re thrilled to be providing our viewers with a new kind of public affairs show that confronts the challenges and opportunities in our society head-on,” Callahan said. “We hope ‘Innovating the Future’ adds to the public discourse in finding solutions to some of our country’s most critical issues.”

A clever use of nonscience engineering data from NASA's Mars rover Curiosity has let a team of researchers, including an Arizona State University graduate student, measure the density of rock layers in 96-mile-wide Gale Crater.The findings, to be published Feb. 1, in the journal Science, show that the layers are more porous than scientists had suspected. The discovery also gives scientists a nov... 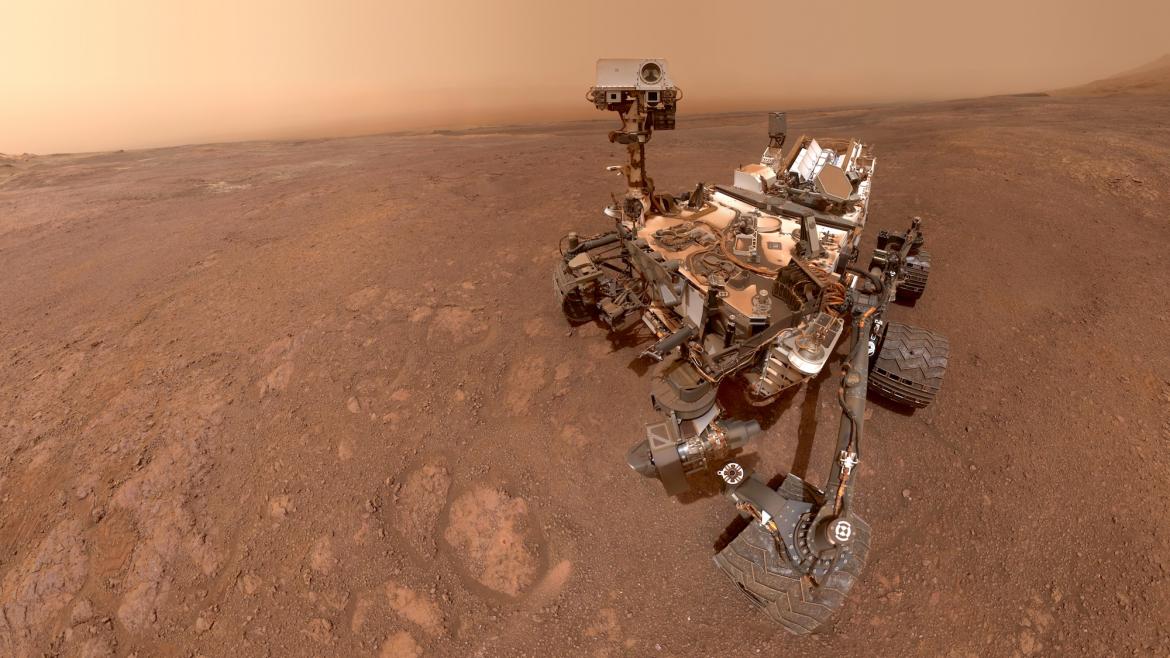 A clever use of nonscience engineering data from NASA's Mars rover Curiosity has let a team of researchers, including an Arizona State University graduate student, measure the density of rock layers in 96-mile-wide Gale Crater.

The findings, to be published Feb. 1, in the journal Science, show that the layers are more porous than scientists had suspected. The discovery also gives scientists a novel technique to use in the future as the rover continues its trek across the crater and up Mount Sharp, a three-mile-high mountain in its center.

"What we were able to do is measure the bulk density of the material in Gale Crater," said Travis Gabriel, a graduate student in ASU's School of Earth and Space Exploration. He worked on computing what the grain density should be for the rocks and ancient lakebed sediments the rover has been driving over.

The much lower figure shows that the rocks have a reduced density, most likely resulting from the rocks being more porous. This means the rocks have been compressed less than scientists have thought.

The engineering sensors used in the study were accelerometers, much like those found in every smartphone. In a phone, these determine its orientation and motion. Curiosity's sensors do the same, but with much greater precision, helping engineers and mission controllers navigate the rover across the Martian surface.

But while the rover is standing still, the accelerometers also measure the local force of gravity at that spot on Mars.

The team took the engineering data from the first five years of the mission — Curiosity landed in 2012 — and used it to measure the gravitational tug of Mars at more than 700 points along the rover's track. As Curiosity has been ascending Mount Sharp, the mountain began to tug on it, as well — but not as much as scientists expected.

"The lower levels of Mount Sharp are surprisingly porous," said lead author Kevin Lewis of Johns Hopkins University. "We know the bottom layers of the mountain were buried over time. That compacts them, making them denser. But this finding suggests they weren't buried by as much material as we thought." 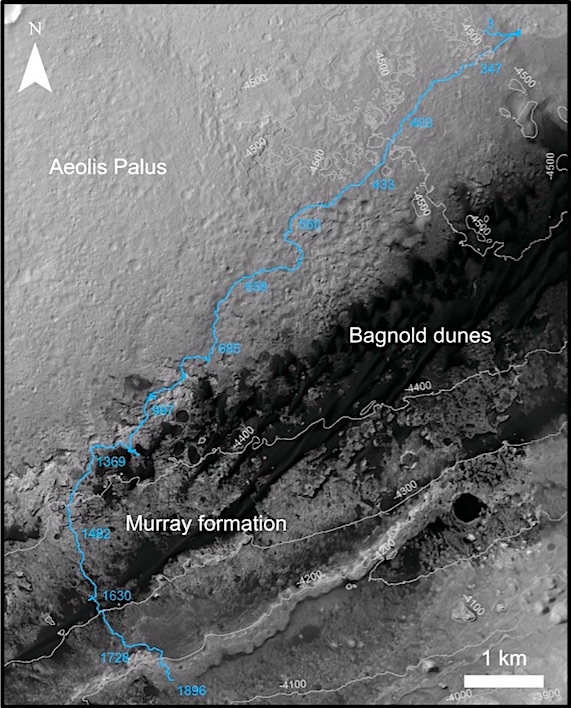 The first 1,896 sols (Martian days) of Curiosity's traverse in Gale Crater appear as a blue line that begins at top right. During that time, the rover drove 11 miles (18 kilometers). Meanwhile, as part of their navigation duties, the rover's accelerometers were recording data that let scientists determine the strength of gravity at many points along the path. 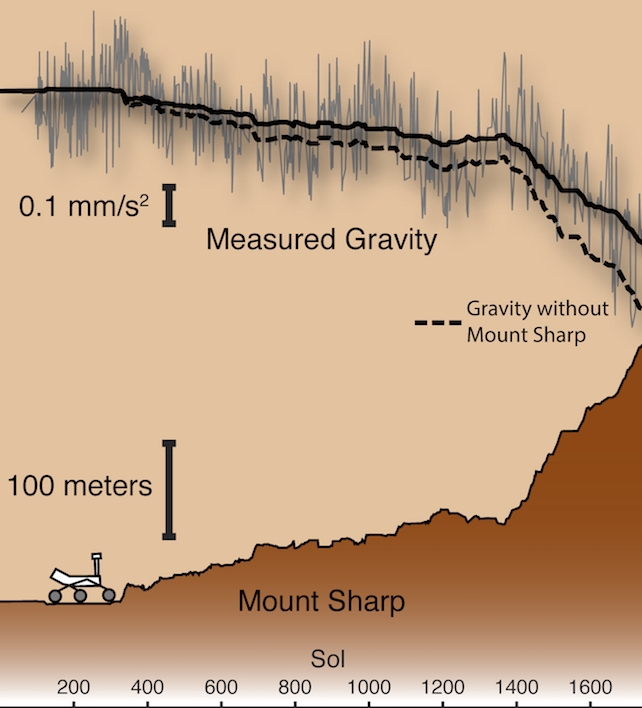 As Curiosity climbs Mount Sharp, it gets farther from the center of Mars and gravity's pull weakens very slightly. However, rover accelerometer data (gray) shows that gravity fell off less than expected. The difference between the predicted pull (dashed line) and modeled (solid line) comes from the pull of Mount Sharp itself. This let researchers estimate the rock density under the rover.

Planetary scientists have long debated the origin of Mount Sharp. Mars craters the size of Gale typically have central peaks raised by the shock of the impact that made the crater. A central peak would account for part of the mound's height. But the uppermost layers of the mound appear to be made of wind-scoured sediments more easily eroded than rock. Where did they come from?

And did these sediments once fill the entire bowl of Gale Crater? If so, they might have weighed heavily on the materials at the base, compacting them.

But the new findings suggest Mount Sharp's lower layers have been compacted by only a half-mile to a mile (1 to 2 kilometers) of material — much less than if the crater had been completely filled.

"There are still many questions about how Mount Sharp developed, but this paper adds an important piece to the puzzle," said Ashwin Vasavada, Curiosity's project scientist at NASA's Jet Propulsion Laboratory in Pasadena, California, which manages the mission. "I’m thrilled that creative scientists and engineers are still finding innovative ways to make new scientific discoveries with the rover."

Gabriel added, "This is a testament to the utility of having a diverse set of techniques with the Curiosity rover, and we’re excited to see what the upper layers of Mount Sharp have in store."

Top photo: In a selfie taken in mid-January 2019, Mars rover Curiosity prepares to enter a new, clay-mineral-rich unit on its traverse up Mount Sharp in Gale Crater. Mission scientists are anxious to see what a new gravity-measuring technique will reveal about the mountain and Gale Crater's history. Image credit: NASA/JPL-Caltech/MSSS