Working on your fitness: Yoga for pregnancy and new moms

Pregnancy is no walk in the park: Women can suffer sudden weight gain, nausea, fatigue, headaches and mood swings. And these symptoms aren’t just uncomfortable — they can prevent a soon-to-be mom from being physically active, a risk to both her and her unborn child’s health, as outlined in the latest updates to the national Physical Activity Guidelines.

Six years ago, when Huberty learned a popular educational text message service for pregnant women didn’t have any messaging regarding the importance of physical activity during pregnancy, she saw an opportunity.

She and her research team partnered with the service and developed 160 text messages about physical activity in the hopes of getting pregnant women moving. What they found was that although women reported improved knowledge and awareness of physical activity, it didn’t necessarily mean they were sticking to a regular workout routine.

“When we looked at their trajectory of physical activity over time, women were increasing physical activity at first, and then right at about 28 to 32 weeks, it went straight down and then just leveled off,” Huberty said. “That’s because there’s this barrier they have, and it’s called pregnancy.”

There’s a period during pregnancy called “the honeymoon phase,” she explained, where during the second trimester, women feel great. Then, right at the 28th to 32nd week, the physical reality of being pregnant becomes an almost insurmountable obstacle to physical activity.

In addition, Huberty said, “We often see that pregnant women who were active before pregnancy not only don’t do any activity during pregnancy, they sometimes don’t return to activity after pregnancy.”

That’s when it hit her: Maybe instead of asking moms to move more, they’d have more success asking them to sit less.

Huberty turned to ASU Associate Professor Matt Buman, whom she had previously collaborated with on an app geared toward discouraging sedentary behavior in veterans. About a year ago, the pair tailored the app for pregnant women with the goal of breaking up sedentary bouts — periods of prolonged sitting — by reminding the user to do things like get up and stretch every 10–15 minutes or take a short walk around the living room.

They conducted a small pilot study about a year ago to get feedback and have since incorporated what they learned into the app, tentatively called Just Move Mom for a future release, which is currently in a review process to earn NIH funding for further testing.

While activities like contact sports, jumping rope and sit-ups are either unsafe or impossible during pregnancy, Matthews is conducting a study to see if the less intense nature of yoga could make it a viable alternative not only to mitigate sedentary behavior but to help manage gestational weight gain.

Aside from yoga’s low-impact benefits, research has also shown that it can relieve certain symptoms associated with pregnancy, including lower back pain, fatigue, nausea and trouble sleeping.

“Because yoga is a lower-impact type of exercise, and because it may help women feel relieved of their symptoms, we’re hoping they’ll be more motivated to stick with it throughout their pregnancy,” Matthews said.

She and her team created a program of specific yoga postures for pregnant women, which they introduce to study participants over the course of a 12-week intervention. They’ll compare the results to a control group, which receives only pregnancy education information.

The program was designed for women to be able to participate throughout the duration of their pregnancy. Participants are enrolled anywhere from 12 weeks along to 24 weeks, meaning they’ll be anywhere from 24 weeks to 36 weeks upon completion. Because of this, Matthews and her team will be able to compare the effects of introducing the intervention at different points throughout pregnancy.

Though her study is focused on yoga’s effect on weight gain, Matthews points out that it has also shown to be effective at managing postnatal depression and PTSD, another research area of focus for Huberty.

Yoga for postnatal depression and PTSD

Eight years ago Huberty gave birth to a stillborn child at full term. Grief-stricken, she turned to yoga and found it helped ease some of her pain. Since then, she’s been committed to researching the healing effects of the practice for moms with postnatal depression and PTSD.

About 26,000 pregnancies a year end in stillbirths, Huberty said. “With those moms, sometimes we do see post-traumatic stress.”

It’s also common among mothers who have other complications, such as C-sections or babies who require care in the neonatal intensive care unit. Even among women with healthy pregnancies and deliveries, about 3 to 8 percent will still experience post-traumatic stress, just from the experience of giving birth.

Huberty is in the midst of a three-year study funded by the NIH that hopes to capitalize on the mindful, meditative aspects of yoga to help quiet the mind and reduce post-traumatic stress in new moms. She expects to report results in about a year.

“It’s very important that we’re thinking about managing and learning how to cope with the emotions that follow (pregnancy and child birth),” Huberty said. “A lot of times physicians are really quick to give a depression medication when these women aren’t necessarily depressed, they’re really just grieving.”

Wanting to lose weight or get the best deal are not the only influences on what people buy at the grocery store: Religious and moral beliefs also impact the food choices people make.

Researchers from Arizona State University, the University of Wyoming and Oklahoma State University have identified moral beliefs that affect food choices of religious and nonreligious people. The study is currently available online and will appear in the February edition of the Journal of Business Research. 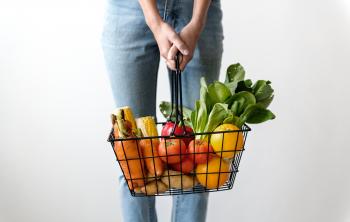 “Often, people make intuitive decisions about food that could require more careful thought,” said ASU’s Kathryn Johnson, assistant research professor of psychology. “People might make choices based on a cultural narrative or their religious and moral beliefs, without giving measured thought to whether there is a better option.”

What people value affects what foods they buy

In a series of four experiments, the research team tested the influence of religiosity, or how generally religious a person is, on the foods people choose to buy and eat. The researchers also looked at which moral beliefs were behind food choices. The study was carried out online and included responses from over 1,700 people across the United States.

“Religion is the deepest set of core values people can have, and we wanted to explore how those values impacted the market choices people make,” said Elizabeth Minton, associate professor of marketing at the University of Wyoming and lead author on the study.

The first experiment looked at how religiosity affected food choice. The participants were asked questions to gauge how religious they were and then answered a question about whether they would purchase a fruit cup. For half of the participants, the fruit cup was described as organic and for the other half as gluten-free.

People who were very religious had less favorable attitudes toward the organic fruit cup and were more likely to say they would buy a gluten-free version. This finding was expected based on two previous studies that reported a social explanation for why highly-religious consumers did not purchase sustainably-minded foods: They did not want to be associated with groups that prioritized environmental issues. The research team wanted to understand what moral beliefs might also be driving this relationship.

“People have different moral intuitions, or moral foundations,” Johnson said. “Some people might be motivated to avoid harming others, including animals, while others might be driven by loyalty to their group or avoiding pathogens.”

A moral perspective on consumer choice

“We found religiosity influenced the selection of more diet-minded foods, which suggests the motives for consuming gluten-free or fat-free foods might not be the same as natural and organic foods,” Minton said. “Many people make decisions about food unknowingly, and it is important when trying to increase healthy choices that people are aware of what influences their decisions.”

The findings from the study also have implications for how businesses market food to consumers.

“The findings from our work can directly help businesses promote food products to specific groups of people without potentially alienating customers by including religion,” said Richie Liu, assistant professor in the school of marketing and international business at Oklahoma State University and senior author on the paper.