Launching in the spring 2019 semester, the new 12-week certification program will be offered through ASU Continuing and Professional Education, taught by ASU faculty with support from Cognizant Consulting professionals. The course bundle will be delivered online with mixed lecture methods, focusing on developing consulting hard and soft skills. The curriculum will address the fundamentals of business analysis, project management, digital enterprise, information technology life cycle, agile frameworks, business modeling and other key topics, as well as providing career coaching.

“Collaborations like this are one of the reasons ASU has been ranked the most innovative university in America by U.S. News and World Report the past four years," said Amy Hillman, dean of ASU's W. P. Carey School of Business. "The curriculum for the new Digital Business Analyst certificate program was co-developed by the school’s Department of Information Systems in tandem with Cognizant Consulting professionals. ASU and the W. P. Carey School are constantly engaging corporate partners to better align our offerings with what skills and expertise the marketplace and employers are seeking. This program is a natural extension of that thinking, and as it becomes successful and scalable, I would expect others to follow the standard set by Cognizant.”

Students who complete the program will have the opportunity to interview for open positions within Cognizant Consulting.

“This new partnership with ASU is one of the many initiatives Cognizant has underway to support education and skilling of America’s workforce for digital economy careers," said Chell Smith, senior vice president at Cognizant Consulting. "Our Cognizant Consulting team is particularly excited about this new program, and the opportunity to work with talented professors and students at ASU — and ultimately to expand our team with individuals completing the program.

“We know, with the custom curriculum based on skills employers truly need for the digital economy, the graduates will be ready to hit the ground running. Business analysts play a vital role in the digital transformations that Cognizant and others are delivering for businesses every single day, and this partnership is intended to help individuals take the first step toward what we believe will become successful consulting careers.”

In 2019, ASU plans to accept at least 100 qualified program applicants into the program at no cost; full tuition and fees will be underwritten by Cognizant.

Apply for the program online.

After a busy fall, the ASU 365 Community Union is bringing more live music to the Valley with three additional concerts on the Coca-Cola Sun Deck. Music-lovers will pack the Coca-Cola Sun Deck as critically acclaimed acts Vic Mensa, Gin Blossoms and The Band Perry all make their Sun Devil Stadium debuts.  “The 365 Community Union is ASU’s growing vision for turning Sun Devil Stadi...

After a busy fall, the ASU 365 Community Union is bringing more live music to the Valley with three additional concerts on the Coca-Cola Sun Deck. Music-lovers will pack the Coca-Cola Sun Deck as critically acclaimed acts Vic Mensa, Gin Blossoms and The Band Perry all make their Sun Devil Stadium debuts.

“The 365 Community Union is ASU’s growing vision for turning Sun Devil Stadium into a vibrant cultural hub that redefines the model for stadia around the world," said Colleen Jennings-Roggensack, ASU vice president for cultural affairs. "We want to create a place where you can imagine Sun Devils of all ages coming together throughout the year.” 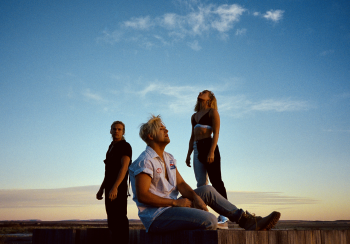 Tickets for all events are on sale now at Ticketmaster, and you can find more information on all the upcoming events at ASU 365 Community Union. A limited number of free and discounted ASU student tickets will be available for all events exclusively on the ASU mobile app.

One of the most acclaimed and celebrated names in hip-hop as a rapper, singer, songwriter and record producer, Vic Mensa brings his incredible talent to the Coca-Cola Sun Deck with special guests — and Tempe natives — Injury Reserve. On his long-awaited debut album  "The Autobiography," Vic Mensa tapped into pivotal moments in his life, reliving each one from one track to the next.

In the late '80s, the Gin Blossoms started to grow a huge following as the No. 1 local music draw in Phoenix and certainly were the hometown heroes of their favorite hangouts in Tempe.

The Gin Blossoms' indelible jangle-pop sound was evolving during a time when radio featured a diverse mix of hair bands and grunge acts. They qualified to perform at the South By Southwest Music Festival in Austin, Texas, in 1989. That same year, College Music Journal dubbed them “The Best Unsigned Band In America” and added an invitation to perform on MTV’s New Music Awards in New York City. Their breakout record, "New Miserable Experience," kept the band on the chart for almost three years, with singles “Hey Jealousy,” “Allison Road,” "Until I Fall Away,” “Mrs. Rita” and “Found Out About You.” "New Miserable Experience" played on four radio formats and, to date, has sold over 5 million copies.

Superstar sibling trio The Band Perry are an unstoppable presence in modern music. After selling two and a half million albums and 13 million singles and racking up over 1.75 billion combined streams of their songs, the story of Kimberly, Reid and Neil is evolving. Since releasing their groundbreaking crossover No. 1 single “If I Die Young” in 2010 (with its current sextuple-platinum status and 160 million video views), The Band Perry has forged a unique, genre-defying identity and built an international fan base leading to sold-out world tours, five No. 1 singles on the Billboard Country Chart, a No. 1 single on the Hot AC chart, six songs reaching gold or platinum status, and in 2015, bringing home their first Grammy Award.

They’ve performed on TV’s biggest stages and their track “Live Forever" was the official theme song for Team USA at the 2016 Summer Olympics in Rio de Janeiro. Known for their boundary-pushing live performances, the band’s combination of music, fashion and visual art has become a hallmark of their dialogue with their fans and with culture. Their creative efforts boast collaborations with artistic luminaries such as Steven Klein, Nicola Formichetti and Neil Krug. Their next era promises to see the band expanding these boundaries yet again.

Most excitingly, The Band Perry have released a highly-anticipated new collection of 5 songs titled "Coordinates", which has received overwhelming acclaim from fans. Music industry icon Rick Rubin executive produced the collection. The band wrote and produced the songs themselves via their Artrat creative house and production collective.