Arizona State University has no shortage of students who are passionate about changing the world, and many have launched startups and formed nonprofits to make a difference.

The juniors and seniors are among the most accomplished students on campus. Most are in Barrett, The Honors College and several are ASU Tillman Scholars. Delaney Bucker was on the ASU women’s triathlon team for two years, winning the national championship. Last month, Shantel Marekera, a Millennium Fellow and a MasterCard Foundation Scholar at ASU, was named a Rhodes Scholar, one of the most prestigious honors in the world.

The students all have their own projects, which show how they want to solve challenging problems. Some of the fellows have joined existing organizations. Three work with the local chapter of the anti-hunger nonprofit Feed My Starving Children, and two work with GreenLight Solutions, founded at ASU in 2013 to connect students with local organizations on sustainability projects. Other fellows launched their own initiatives. Marekera, the Rhodes Scholar, founded the Little Dreamers Foundation, a subsidized preschool in her native Zimbabwe. Nisha Rehman started the student club Hands for Henna, which supports refugee girls.

For some, their passion was fueled by personal experience. As a child, Elijah Smith experienced hunger.

“It’s something that has ultimately had a really profound impact on my upbringing, outlook and who I've become,” said Smith, a senior majoring in computer information systems in the W. P. Carey School of Business. 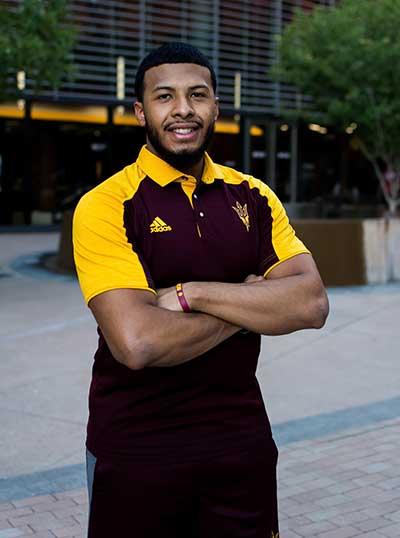 ASU student Elijah Smith, a Millennium Fellow, is working on a project that would allow students to donate unused M&G Dollars to reduce hunger.

At ASU, students who buy a meal plan get a certain amount of “M&G (Maroon & Gold) Dollars,” which are lost if they’re not used by the end of the semester. Smith saw students spending their end-of-term M&G Dollars on fancy coffee drinks and pizza for friends.

“And while these decisions aren't bad or inherently selfish, they represent an inefficiency and lack of support within the current framework,” Smith said.

He thought that, given a choice, students would rather spend some of their extra food money to help people who are hungry. So, as part of his Tillman Scholars venture project and, now, his Barrett thesis, Smith came up with the M&G Drive, which would encourage Sun Devils to use M&G Dollars to buy a non-perishable food item to donate.

“Even though the M&G Drive is tangibly focused on diverting M&G and supplying our community with the food it needs to combat hunger and food insecurity, it is focused on something greater — helping our fellow students understand just how privileged we truly are as students, and that we can create meaningful, lasting impact in the lives of those around us by simply asking, ‘How can I help?’ ” said Smith, who is working with university administration to get the program implemented.

Two other Millennium Fellows, Madison Sutton and Sonia Sabrowsky, both senior psychology majors, co-founded the Home Base Initiative after dealing with a friend who committed suicide. Their nonprofit offers mental health resources for students, parents and educators and will be creating peer-support networks for teens.

The point of the Millennium Fellowship is to harness the creativity and energy of the students to help each other advance their projects through networking and brainstorming. The group met several times over the fall semester to learn best practices. One of the exercises was “road mapping,” determining a project’s chain of effect. That was eye-opening for Smith, who saw how the M&G Drive would affect students, parents, the administration and even the contracts that ASU has with vendors.

Another program related to food insecurity is the Culinary Collective Project, a student-led research initiative aiming to provide resources for low-income ASU students. Nathan Tom, one of the co-founders, said that the project held an event called “Full Plates for the Whole Planet” during the fall semester to survey students and connect them to food resources.

“This event gave our a team a more comprehensive understanding of the scope of food insecurity at ASU and what a viable solution might look like in the future,” he said. “We had over 100 students and community members in the space that night, and we were able to successfully bring both students and stakeholders to the table.”

“We discussed the importance of corporate social responsibility and the role it will play for the Culinary Collective in the future,” Tom said. “Not only did the Millennium Fellowship give me a global community of social-impact leaders, it also gave me direct access to prominent, accomplished leaders in the industry I aspire to work in one day.”

The Millennium Fellowship program has been around for a few years, but the U.N. expanded it worldwide this year and aligned it with the U.N. Sustainable Development Goals.

Two of the ASU fellows who served as campus directors, Nina Patel and Jennifer Guzman, coordinated activities and ran the meetings.

Patel said there were logistical challenges because the program is in its first year and has a large number of students. But she discovered that the program helped to raise the profile of the Global Women’s Health Initiative, the project she co-founded with another Millennium Fellow, Asha Ramakumar. 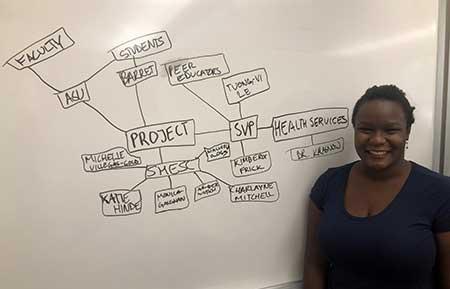 ASU student and Millennium Fellow Paula Kibuka Musoke participated in a "road mapping" exercise with the other fellows to see the effects of their individual projects. Musoke's project is a research initiative into sexual health.

“It was a brand-new project, but once we started advertising it with the U.N. Millennium name, we started getting a lot of attention, not only from students but also from other organizations who wanted to come speak at our events and communicate with us,” said Patel, a junior majoring in global health.

One of the concepts the fellows studied was partnership — avoiding paternalism by collaborating with people they’re helping. Guzman said that attitude was helpful as she worked with Central Arizonans for a Sustainable Economy to register people to vote.

“Our main objective is closing the gap with people who are not engaged with the political process, through voter outreach and getting people to the polls, and giving them a role for themselves,” said Guzman, a junior double majoring in political science, and public service and public policy.

“We’re not trying to preach to them.”

Like about one-third of the Millennium Fellows worldwide, Guzman is a first-generation college student.

“We’re privileged in the sense that we have access to education and resources, and we understand that not everyone comes from the same background,” she said.

While the fellows graduated from the program in December, their projects will continue and Patel said the group will still try to meet. And they now are part of the worldwide Millennium Fellow alumni network.

“Throughout the semester we were constantly checking how the projects were doing and whether the fellows needed resources and how we could connect them with a student halfway around the world doing similar work,” she said.

“It was interesting to see the fellows in India, China and Saudi Arabia doing amazing work and how we could find a way to collaborate with them.”

On Dec. 18, Rhode Island Gov. Gina Raimondo and the University of Rhode Island (URI) announced the first round of Rhode Island Innovation Campus projects. Arizona State University will collaborate with URI on an innovation hub focused on cybersecurity, big data analytics and the "internet of things." The project supports ASU’s efforts to be a model for a new cohort of National Service Universi...

On Dec. 18, Rhode Island Gov. Gina Raimondo and the University of Rhode Island (URI) announced the first round of Rhode Island Innovation Campus projects. Arizona State University will collaborate with URI on an innovation hub focused on cybersecurity, big data analytics and the "internet of things." The project supports ASU’s efforts to be a model for a new cohort of National Service Universities, which provide critical social and economic benefit and a dedication to societal impact through education and research.

ASU Now spoke with Sethuraman Panchanathan, executive vice president of Knowledge Enterprise Development and chief research and innovation officer at ASU, about the partnership with URI and about National Service Universities. 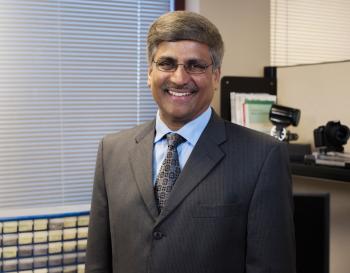 Sethuraman Panchanathan, executive vice president of Knowledge Enterprise Development and chief research and innovation officer at ASU, says the partnership between ASU and the University of Rhode Island will result in cutting-edge technological innovations at scale, will serve both universities' student bodies and faculty and will advance the public value of our institutions. Download Full Image

Question: What is an innovation center?

Answer: An innovation center is a place for finding creative solutions for various challenges and opportunities by working in partnership with academia, industry and the government.

Q: Why is ASU well suited to partner with the University of Rhode Island on a project like this?

A: ASU is the most innovative university in the country. We are committed to partnering with that spirit of innovation in our collaboration with URI. Innovation is ubiquitous. Partnerships help accelerate outcomes in research, education and entrepreneurship. We are looking forward to scaling innovation at a national level through this collaboration.

Q: What is a National Service University, and how does the Rhode Island Innovation Center fit into that concept?

A: ASU aspires to be a model for a new cohort of National Service Universities. These universities provide critical social and economic benefit to our country with dedication to societal impact through the highest-quality education and research. The University of Rhode Island is committed to this mission, and the partnership between ASU and URI will result in cutting-edge technological innovations at scale, will serve both of our student bodies and faculty in advancing their knowledge and will advance the public value of our institutions.

Q: How can other universities become National Service Universities?

A: Any university that subscribes to the vision of being an innovative, technology-intensive public research institution dedicated to providing critical social and economic benefit at scale would be a natural partner and in the cohort of National Service Universities.