Charles J. “Chuck” Robel is a 1971 graduate of the W. P. Carey School and a 2014 inductee into its Alumni Hall of Fame. Since 2008, he has been on the board of directors of GoDaddy Inc., an internet domain registrar and web hosting company based in Scottsdale, Arizona, and has served as its chairman of the board since 2015. Previously, he served as chairman of the board of McAfee, one of the world’s best-known computer-security software companies, prior to its multibillion-dollar sale to Intel. 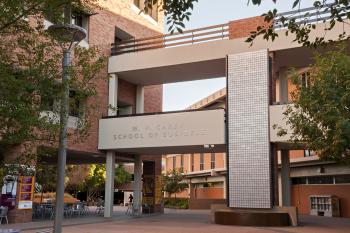 Robel spent the first 26 years of his career at PricewaterhouseCoopers, leading its M&A technology group and software industry practice in Silicon Valley. Earlier this year, he was named to the board of directors of Sumo Logic, a cloud-native, machine data analytics platform, and was appointed chairman of the board of Model N Inc., a revenue management cloud solutions provider.

Robel has served on the boards of numerous public and private companies. He has been involved in more than 80 initial public offerings (IPOs) as an adviser, investor and board member.

“Chuck has been a longtime supporter of the W. P. Carey School and of ASU in general,” said Amy Hillman, dean of the W. P. Carey School and recipient of the Charles J. Robel Dean’s Chair. “We’ve been fortunate to have his commitment for a number of years, and we are proud that this new position will extend a vital relationship for both of us. By giving back to his alma mater, this gift also speaks to the importance education plays in someone’s life.”

“I’ve always felt like I have a very strong connection with ASU, and as a graduate of the business school, seeing how far it has come over the years has been tremendously gratifying,” Robel said. “I have been honored to assist in its mission in the past, and am thrilled to be a member of its prestigious hall of fame. Now, I’m very proud to continue my association with the W. P. Carey School through this gift and help the school build on its reputation for excellence.”

The donation to the business school comes as part of Campaign ASU 2020, an ongoing initiative to generate at least $1.5 billion in private funding for ASU, named the most innovative university by U.S. News & World Report the past four years, ahead of MIT and Stanford.

An endowed chair is a coveted honor for faculty, recognizing years of thought leadership, leading-edge research and dedicated service. Through the endowment, a chair receives much-needed resources that assist its recipient in conducting research, devoting time to service projects and other extracurricular responsibilities.