NASA's OSIRIS-REx spacecraft, newly arrived at asteroid Bennu, has found strong spectral evidence that the asteroid's rocks have undergone interactions with water at some point in their history.

The evidence comes from two onboard spectrometers, one of them designed and built at Arizona State University's School of Earth and Space Exploration. 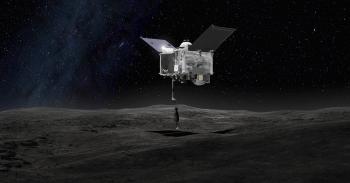 This artist's concept shows the OSIRIS-REx spacecraft contacting the asteroid Bennu with its Touch-And-Go Sample Arm Mechanism, or TAGSAM. The OSIRIS-REx Thermal Emission Spectrometer, built at ASU, will help scientists choose a location for TAGSAM to collect a sample for return to Earth. The spectrometer will also gather detailed information about Bennu's mineralogy and provide data to analyze the asteroid's future trajectory. Image by NASA Goddard Space Flight Center Download Full Image

The discovery was announced Dec. 10 at a news conference at the American Geophysical Union's Fall Meeting in Washington, D.C.

"We're delighted to share in this discovery," said Philip Christensen, Regents' Professor in the School of Earth and Space Exploration. Christensen is the instrument scientist and designer of the OSIRIS-REx Thermal Emission Spectrometer, or OTES for short.

"The two instruments found similar results, and their data complement each other," Christensen said. "This result is just the beginning."

"Spectral interpretation of asteroids like Bennu is one of the key science objectives of OSIRIS-REx," said the University of Arizona's Dante Lauretta, principal investigator for the OSIRIS-REx mission.

"We are the first planetary mission to fly both a visible-near-infrared spectrometer and a thermal emission spectrometer. With this discovery, our investment in top-notch scientific instruments has paid off. We are confident in achieving mission success by returning pristine samples of carbonaceous asteroidal material to Earth."

Launched in September 2016, OSIRIS-REx stands for Origins, Spectral Interpretation, Resource Identification, Security-Regolith Explorer. Led by the University of Arizona in Tucson, the mission's goal is to bring to Earth a sample of Bennu's surface materials for scientists to study. OSIRIS-REx finally arrived at Bennu on Dec. 3, 2018.

But before choosing a location to sample, the spacecraft has begun a global study of Bennu, which is about 500 meters (1,600 feet) in diameter and has a day lasting 4 hours 17 minutes. The global study, to which OTES will contribute a mineralogical survey and temperature measurements, will see the spacecraft map Bennu's entire surface at medium resolution and selected areas at high resolution.

Bennu's gravity is extremely weak: only 1/100,000th that of Earth. This means the spacecraft must move slowly, adjusting its path with small thruster burns. The global survey is expected to take until summer 2019 to complete.

When the time comes to collect a sample, OSIRIS-REx won't even land. Instead it will use a touch-and-go mechanism that jets nitrogen gas to stir up dust, sand and rock particles, plus a collector similar to a car air filter to catch the samples. The mission aims to collect at least 60 grams. The samples will then be packed away in a heat-shield-protected sample return capsule.

OSIRIS-REX will continue to study Bennu until the spacecraft leaves the asteroid in March 2021. The sample capsule will be delivered to Earth in September 2023. 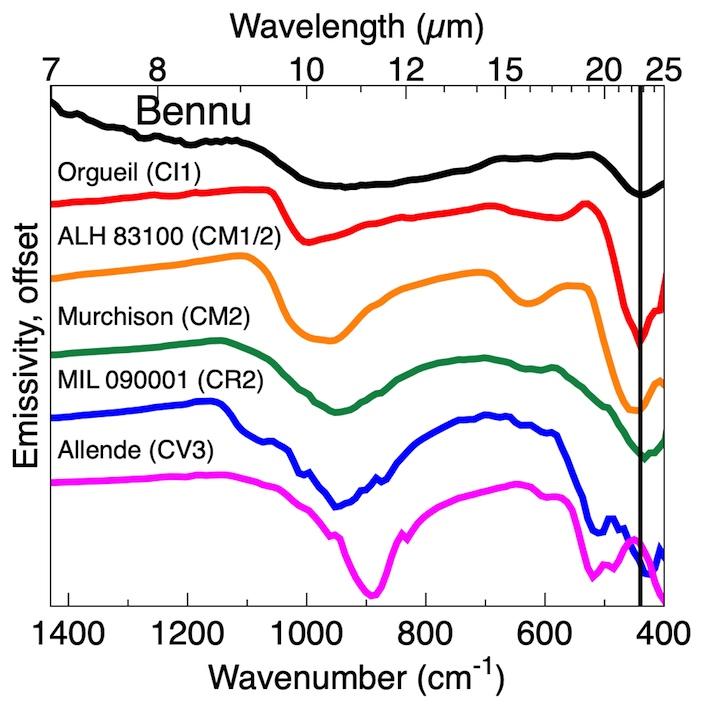 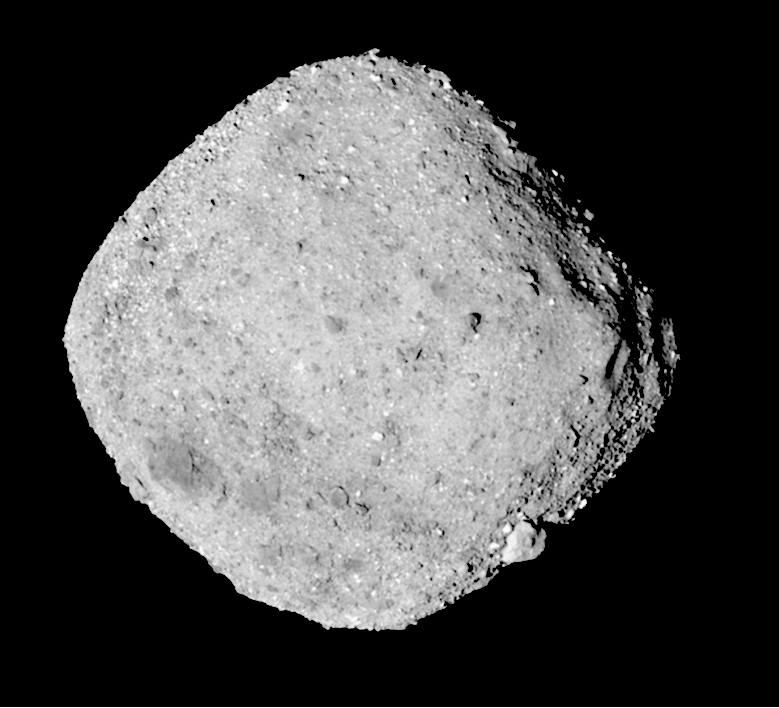 Asteroid Bennu, imaged Dec. 3, 2018, by the OSIRIS-REx spacecraft using its PolyCam imager. The spacecraft was about 50 miles away from Bennu at the time and approaching slowly. Note its rough surface and many rocks and boulders, including a large one at lower right. Initial science results show its surface has spectral similarities to water-altered carbonaceous meteorites. The OSIRIS-REx Thermal Emission Spectrometer (OTES) was designed at ASU and built in ASU's clean rooms. The instrument, pictured on June 22, 2015, in Tempe before being sent off on its mission, is now surveying the asteroid Bennu on NASA's OSIRIS-REx spacecraft.

The OTES spectrometer operates at far infrared wavelengths, where rocks and surface materials reveal their mineralogical nature more clearly than at the visible wavelengths to which human eyes are sensitive.

"Currently, we're seeing lots of surface in the field of view," she explained. "But when we get down closer, we'll see details and variations that are all merged together at our present distance."

The other spectrometer on the mission, the OSIRIS-REx Visible and InfraRed Spectrometer (OVIRS), made a parallel discovery using the visible and shorter infrared wavelengths where it is most sensitive.

"The presence of hydrated minerals across the asteroid confirms that Bennu, a remnant from early in the formation of the solar system, is an excellent specimen for the OSIRIS-REx mission to study the composition of primitive volatiles and organics," said OVIRS deputy instrument scientist Amy Simon, of NASA's Goddard Space Flight Center.

Working in the thermal infrared, OTES also acts as a thermometer, taking the temperature of Bennu's surface.

"Bennu is a black object at about Earth's distance from the sun," Christensen explained. "This means it gets quite hot — at noon the surface has a temperature of about 150 degrees Fahrenheit."

But because Bennu lacks an atmosphere, he says, the surface cools off quickly at night, dropping to about -45 degrees Fahrenheit just before sunrise.

Later on, when OSIRIS-REx approaches Bennu more closely, OTES will see smaller details on the asteroid. At that point, said Christensen, "The day-night temperature differences from place to place will tell us something about the physical properties of the surface materials — how loose or compacted they are."

Looking ahead, the OTES team is hoping to study boulders and other features on Bennu, which the instrument can't yet resolve.

"We have a long ways to go, but the data are very encouraging," Christensen said. "From the very first observations, we're able to talk about comparing Bennu to meteorites that people have been studying for decades.

Building prosthetics that can feel

On May 27, 2011, Jason Little, a 41-year-old real estate investor from Orlando, Florida, was in an accident. His SUV rolled over on the interstate, shattering the driver’s side window. Little’s left arm was trapped outside, mangled beyond saving from the elbow down.Flash-forward to this past summer, when he was matched with a prosthesis that connected to his nervous system. He hadn’t felt hi...

Behind-the-scenes peek: How to build a deep-space instrument for NASA mission

ASU scientists use 'shake and bake' to get ready 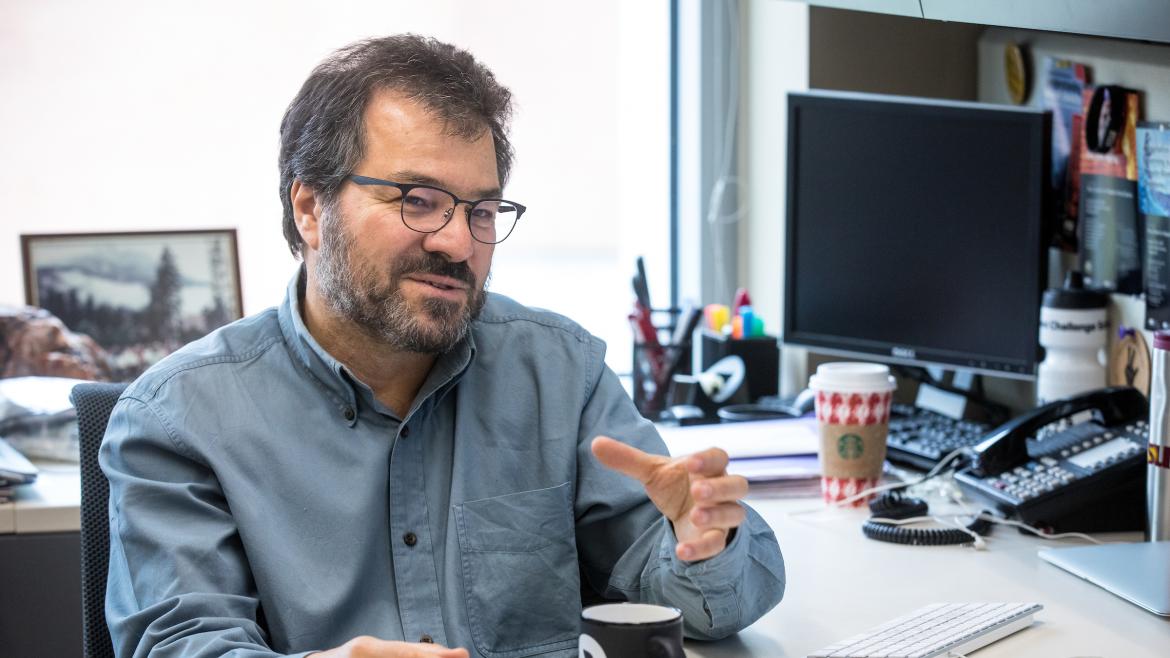 Building prosthetics that can feel

On May 27, 2011, Jason Little, a 41-year-old real estate investor from Orlando, Florida, was in an accident. His SUV rolled over on the interstate, shattering the driver’s side window. Little’s left arm was trapped outside, mangled beyond saving from the elbow down.

Flash-forward to this past summer, when he was matched with a prosthesis that connected to his nervous system. He hadn’t felt his wife’s touch with his left hand in more than seven years.

“I closed my eyes, she put her hand in the prosthetic, and I closed it, and I was able to tell her I was touching her hand,” Little said. “She broke down. It was a pretty powerful moment.”

The prosthetic hand, the first of its kind, is the culmination of 12 years of work by James Abbas (pictured above), an associate professor in the School of Biological and Health Systems Engineering at Arizona State University, and Professor Ranu Jung, chair of the Department of Biomedical Engineering at Florida International University. The research was announced last month.

“For someone to function in a more seamless way, if you’re at a dinner party or wherever, you want to pick up things without staring at them or paying a lot of attention,” said Abbas, director of the Center for Adaptive Neural Systems. “We feel there is value to this, maybe also in terms of returning to work.”

For Little, the value is incalculable. He can do things like open a water bottle without squeezing it too hard and bursting the bottle.

“It sounds like such a simple task, but when you don’t have that feedback, it’s very difficult to know how hard you’re squeezing something,” he said. “They’ve been able to get pretty close as far as where on my hand where I should feel things. It’s amazing."

With his old prosthesis, Little had to rely on visual or auditory cues that he was crushing something or letting it slip from his grasp.

“That’s the only feedback I was getting previously,” he said. “Now I can tell you whether an object is hard or soft. That’s incredible to me.”

Neural stimulation is not new. Researchers long have been interested in stimulating different areas of the brain to achieve various results, but there’s also interest in going into peripheral nerves, such as in the arms or legs.

Electrodes have been developed to go inside peripheral nerves. Fine wires, thinner than a human hair, are sewn into the nerve and activate neurons within small bundles of nerves called fascicles.

Ken Horch, professor emeritus of bioengineering at the University of Utah, has tested wires on amputees. People who hadn’t had a hand in 20 years could feel sensation, because, while the hand was gone, the appropriate nerves were still attached to the spinal column. The brain still thinks it’s feeling the hand. Abbas and Jung contacted Horch with the idea that the wire tech could be turned into a system someone could use on a daily basis.

They partnered with a medical device company called Cochlear Corporation. The company makes an electrode ear implant that is implanted in the inner ear structure. When the nerve fibers are stimulated, users can hear sound. About 300,000 people use cochlear implants.

“We worked with them to modify it for our needs,” Abbas said. “We were able to benefit from what Cochlear has already developed.”

What they created is called the Neural-Enabled Prosthetic Hand system. The wires are implanted in the upper arm. They connect to a neurostimulator implanted in Little’s shoulder that has a radio frequency coil and a magnet. When Little dons the arm, he positions an external coil over the implant and it is held in place with a magnet.

“It basically is sensing two things,” Abbas said. “One is the force on the thumb, and the other is how much it’s open.”

The hand opens and closes, and the thumb and forefinger “feel,” but not the other three fingers.

“If it gets too complex it’s going to be problematic,” Abbas said. “It just gives him more things to pay attention to. If you think about it, there are diminishing returns. … Right now there are just two pieces of information we’re trying to convey: How much is the hand open, and how much force is he applying?”

Part of the idea was to work with existing technology to get the arm out in the world sooner rather than later.

“If all goes well, we hope he’ll be using it for the rest of his life,” Abbas said.

To Little, the stimulation feels like being electrocuted, but at a one on a scale of 10.

“It’s a really weak electrocuting experience, is the best way to explain it,” he said. “It doesn’t hurt at all.”

He sends a signal from his brain to his muscle, and his muscle controls the hand. The prosthesis sends a sensation signal back.

“It’s two-way communication that’s brand-new,” he said. “With those two bits of information, I’ve been able to determine, with about 80 percent accuracy, whether I’m holding a block of wood or a block of foam, and whether or not that block is three-quarters of an inch wide, or an inch and a half wide, based on the hand position sensor.”

The project was funded by the Defense Advanced Research Projects Agency of the U.S. Department of Defense and the National Institutes of Health.

Top photo: Associate Professor James Abbas, director of the ASU Center for Adaptive Neural Systems, helped develop a neural-enabled prosthetic hand that allows its user to feel pressure and sense whether a held object is hard like a coffee mug or soft like a banana. The project has taken a dozen years to develop, and its electrodes were surgically implanted in the first subject, Jason Little of Orlando, in March 2018. Photo by Charlie Leight/ASU Now