On Feb. 16, 2019, in Phoenix, F.W. de Klerk, the South African president who ended apartheid, will receive the O’Connor Justice Prize, administered by the Sandra Day O’Connor College of Law at Arizona State University.

Inspired by the legacy of retired U.S. Supreme Court Justice Sandra Day O’Connor the prize recognizes world leaders whose achievements have advanced justice, human rights and the rule of law. 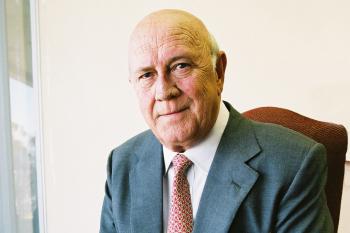 Shortly after assuming the office of president in 1989, FW de Klerk astounded his countrymen and the world by announcing his intention to establish equal rights for all South African citizens and release Nelson Mandela from his long imprisonment.

Against all odds, President de Klerk succeeded in dismantling South Africa’s long-standing apartheid system. Moreover, he applied his legal skills to transform his nation into a multiracial democracy with a fully democratic constitution.

The Nobel Peace Prize committee recognized the bold change of political course for South Africa by citing de Klerk’s and Mandela’s “work for the peaceful termination of the apartheid regime and for laying the foundations for a new democratic South Africa.”

As architect of what has been identified as “one of the most daring successful political revolutions of the 20th century,” de Klerk then applied his experience to innovative global diplomacy.

After his presidency, de Klerk marshaled his worldwide convening power to found the Global Leadership Foundation, a cadre of former presidents, prime ministers and other top national officials.

With teams of these former leaders, de Klerk provides free confidential advice when requested by current presidents who seek to promote peace, democracy and development.

From hostage negotiations to trade negotiations and from education to elections, de Klerk and his team design solutions to intractable national problems through the Global Leadership Foundation. Each round of advice is tailored to local realities. After 15 years, de Klerk continues to guide the organization as chairman.

When informed of his selection, de Klerk said the O’Connor Justice Prize holds special meaning to him.

“Justice O’Connor is one of the great people in the history of American justice," de Klerk said. "I have the highest admiration for what she achieved during her impressive career. It has been my privilege to meet Justice O’Connor during a previous visit to Phoenix. I cherish the memory of that meeting.”

“I look forward to visiting Phoenix again to accept this prize,” he said.

President de Klerk will be the fifth recipient of the prize. Previous recipients are:

• Navanethem Pillay, former U.N. high commissioner for human rights. She was honored for her fight against apartheid, as well as her work championing international human rights.

• Ana Palacio, former foreign minister of Spain and high official in the European Union and World Bank. In the European Union, Minister Palacio was instrumental in ensuring an independent judiciary and universal voting rights. She was also recognized for her continuing battle for international rule of law.

• Jimmy Carter, the 39th president of the United States, for his humanitarian work since leaving office. He was awarded the Nobel Peace Prize in 2002 for his efforts to find peaceful solutions to conflicts, advance democracy and to promote economic and social development.

• Anson Chan, former chief secretary of Hong Kong — the top role held by a Hong Konger in the government under first British, then Chinese rule. Known as “Hong Kong’s conscience” for her decades of tenacious defense and advocacy of democracy, human rights and the rule of law. Chan fought for transparent and accountable government, gender equity in employment law, civic awareness and safeguards for the rights and freedoms sanctified in the Beijing agreement.

Once a year, ASU Open Door invites the local community to experience ASU and explore the spaces accessible only to ASU students — laboratories, living collections, museums and classrooms. Visitors have the opportunity to participate in hundreds of interactive, hands-on activities and talk to students, faculty and staff.The deadline for ASU departments to submit their activities to participate ...

Once a year, ASU Open Door invites the local community to experience ASU and explore the spaces accessible only to ASU students — laboratories, living collections, museums and classrooms. Visitors have the opportunity to participate in hundreds of interactive, hands-on activities and talk to students, faculty and staff.

The deadline for ASU departments to submit their activities to participate in ASU Open Door 2019 is Monday, Dec. 3. 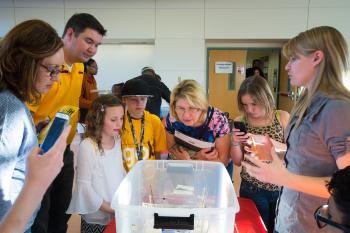 Don’t miss the opportunity to engage thousands of visitors and showcase the incredible things your department does every day to make ASU No.1 in innovation.

Visit opendoor.asu.edu to submit your activity.

ASU Open Door occurs on four ASU campuses. The 2019 dates and times are: