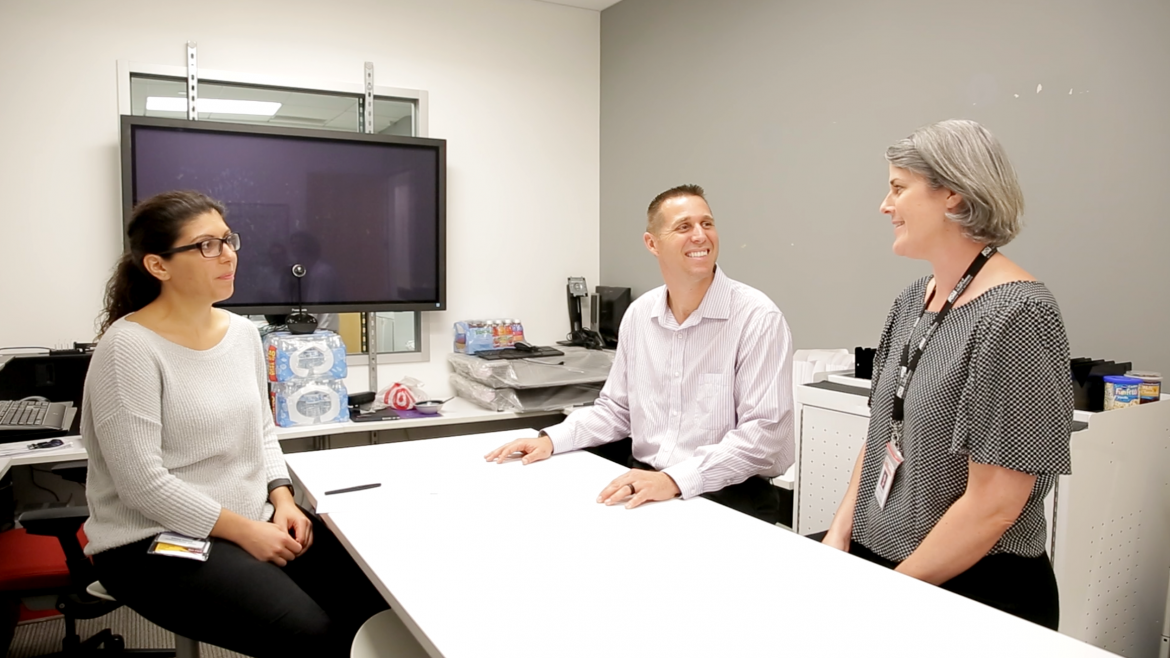 Downtown Phoenix campus
Too much sitting can lead to heart disease, diabetes, stroke and more.
Standing & moving at work can help offset negative effects of too much sitting.
November 21, 2018

Not so long ago — in the grand scheme of history — humans were constantly on the move. Escaping predators. Hunting for their next meal. Migrating to a more hospitable region. Being physically active wasn’t something we had to put much effort into.

Today, urban environments keep us from becoming mountain lion chow, most of our living essentials are available within a five-mile radius and we have the luxury of driving to get them. Many of us also have jobs that require us to sit for extended periods of time.

“Sitting is just something that’s quite ubiquitous,” said Matt Buman, associate professor at Arizona State University’s College of Health Solutions. “We do it all the time, and the workplace is one of those places where it’s most likely to occur, particularly for people who have office jobs.”

Earlier this year, Buman served as one of nine special consultants for a report that informed an updated version of the national Physical Activity Guidelines, which was officially released at the recent American Heart Association meeting in Chicago.

First published in 2008, the national Physical Activity Guidelines impact public health policies and how we organize to work toward better health outcomes.

This most recent iteration of the guidelines reflect the latest, most accurate scientific evidence regarding physical activity. One of the key updates is a greater recognition of sedentary behavior, defined as sitting.

Buman, an expert on sedentary behavior, is in the midst of a study that hopes to identify interventions and resources that can be implemented in the workplace to reduce the amount of time employees sit during the workday.

“We’re finding that without support and resources at the work-site level, it’s difficult to integrate standing and moving into your daily life,” he said.

Too much sitting can lead to health issues such as heart disease, diabetes, stroke and high blood pressure — all of which can be life-threatening. So the need to get people moving is crucial.

For the study, titled “Stand and Move at Work,” Buman and colleagues selected 24 work sites in two states — half in Arizona and half in Minnesota — where sitting during the day was common and randomized them to receive one of two interventions.

One intervention focused just on moving more at work, promoting the idea with messaging and signage, as well as strategies and new policies that allowed for more movement.

Preliminary results found that employees who received sit-to-stand workstations stood an extra hour of an eight-hour workday relative to those who did not receive the workstations. This produced reductions in musculoskeletal symptoms (such as back pain), overall improved quality of life, and among those who were at risk for diabetes, a reduction in diabetes risk and weight loss.

Buman feels the study highlights the importance of having an office infrastructure that allows for movement and standing.

“Our results are showing that, at least among office workers who sit most of the day, to be able to get them up and moving, or even just standing, it does require a sit-to-stand workstation,” he said.

Researchers also found that study participants maintained use of the sit-to-stand workstations after a year.

“The reason this study is important is because with this emerging awareness that sedentary behavior is a health risk, it’s really important to determine how you actually get people to sit less,” Buman said.

Currently, he is working with colleagues to establish a workplace research consortium between American, Australian and British researchers that will seek to address international solutions to reduce sitting and increase activity in the workplace.

An extremely rare, first-edition copy of a 17th-century literary work by one of the world’s most fascinating female writers has found a home at Arizona State University.The writer is Sor Juana Inés de la Cruz (circa 1651-1695), the premiere poet of the Americas, a celebrity in her day and now considered an early feminist, who joined a convent in order to devote her life to the study of scienc... 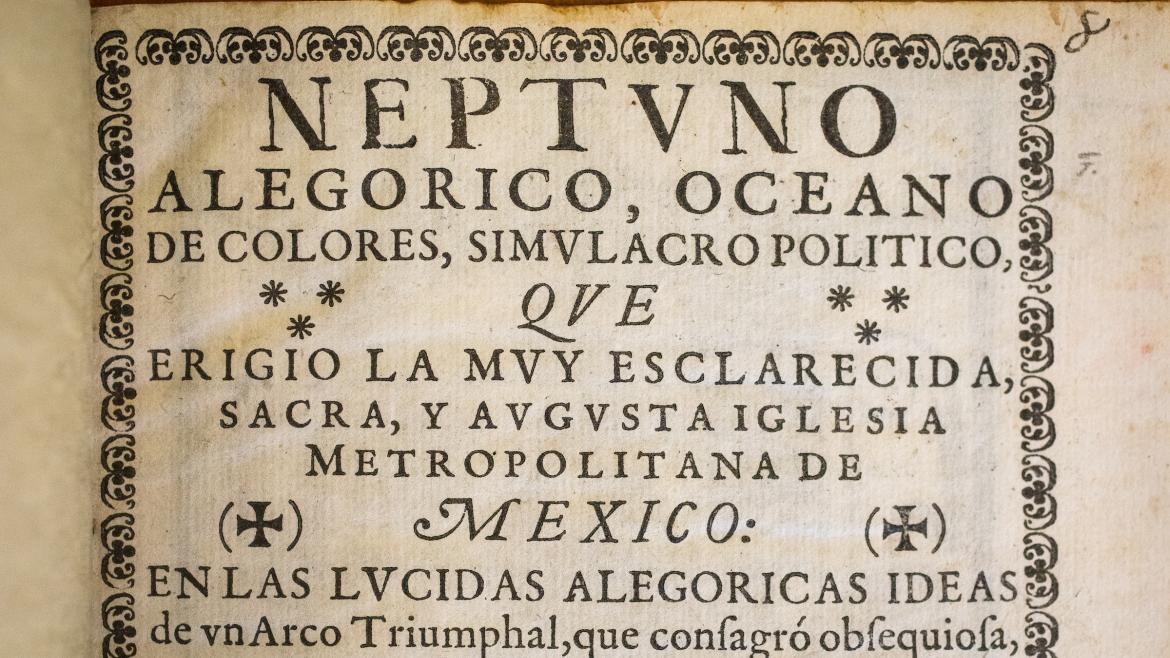 An extremely rare, first-edition copy of a 17th-century literary work by one of the world’s most fascinating female writers has found a home at Arizona State University.

The writer is Sor Juana Inés de la Cruz (circa 1651-1695), the premiere poet of the Americas, a celebrity in her day and now considered an early feminist, who joined a convent in order to devote her life to the study of science, philosophy, writing and art.

The book, or booklet, is "Neptuno alegórico," an essay commissioned by the archbishop of New Spain, or Mexico, in 1680, documenting the arrival of the new Spanish viceroy.

In the essay, Sor Juana describes an arch that was used for the viceroy's procession into Mexico City and the classical artwork that decorated it. The booklet was printed unbound and in limited number to be given as gifts.

“This is a rare ephemeral document that is now the anchor of our colonial Latin American collection at ASU Library,” said Seonaid Valiant, curator for Latin American studies at the ASU Library. “The piece is well-known, often included in collections of Sor Juana’s writing, and lets us study a unique style of printing.”

Sor Juana’s essay depicts the new viceroy as Neptune, emerging from the sea, a display of the breadth of her classical knowledge, says Valiant.

“She was self-educated and knew all the great classical scholars. Because we have the first edition, we get to see the essay before her corrections were incorporated in the third edition,” said Valiant. “It’s a fascinating document.”

Nothing about Sor Juana’s life is ordinary.

She built one of the largest personal libraries in the Americas, learned how to read by the age of 3, and declined many a marriage proposal, ultimately becoming a nun in an effort to continue her self-directed scholarship.

Born in New Spain, she joined the Order of Saint Jerome, or Hieronymites, in order to further cultivate her intellectual life, which at the time was not reserved for women.

“She entered a convent in order to be a scholar, slowly showing that her writing could be a benefit to God,” said Valiant. “She cared deeply about the quality and purpose of her life, and vocalizing this made her an American individual. Sor Juana uses the word ‘I’: She tells us, ‘I have ambition. I have needs.’ She is one of the first Americans to say this.”

By the time Sor Juana wrote "Neptuno alegórico," her literary accomplishments were becoming better known throughout Spain and New Spain. 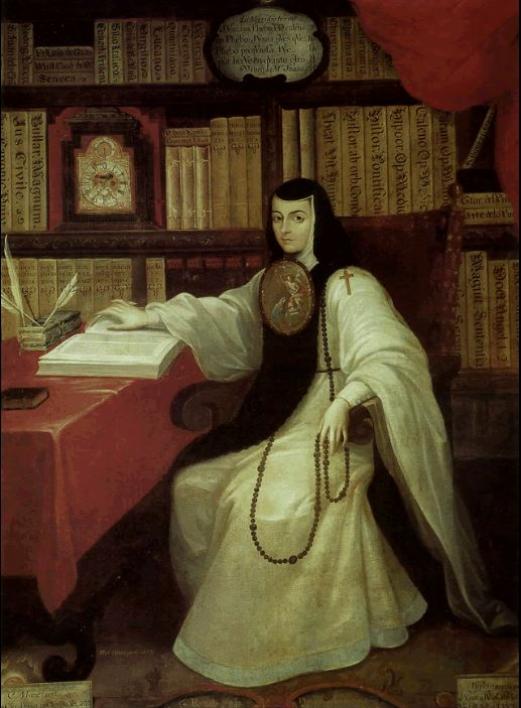 A portrait of Sor Juana Inés de la Cruz by Miguel Cabrera, recognized as the greatest painter of his generation in New Spain (today's Mexico). 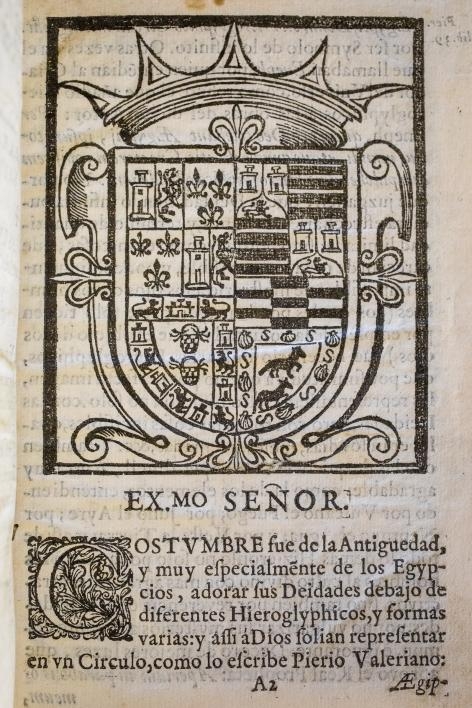 The book, or booklet, acquired by ASU Library is "Neptuno alegórico," an essay commissioned by the archbishop of New Spain, or Mexico, in 1680, documenting the arrival of the new Spanish viceroy. Emil Volek, a professor in the School of International Letters and Cultures at ASU, says the acquisition of the booklet is significant, in part, because it had helped cement her career as a writer.

“It was this booklet that launched her secular career,” said Volek, the author of several critical writings about Sor Juana’s work. “It will stimulate research already done on her at ASU and will further strengthen the national standing of ASU as a powerhouse and a well of knowledge.”

Valiant, who facilitated the acquisition, is working to grow the Latin American collection at ASU Library, which was established in the 1970s to support faculty and graduate students doing work in this period.

“These earlier books are harder to find, but it is important to have them at hand in order to study the content as well as the history of the book,” she said.

University Librarian Jim O’Donnell, a classics professor in ASU's School of Historical, Philosophical and Religious Studies, said Sor Juana’s "Neptuno" is “so rare, so special, so fascinating … it’s the kind of library acquisition that gives its readers gooseflesh.”

Readers of Sor Juana can experience the booklet — gooseflesh and all — by requesting an appointment with Kathy Krzys, the library's curator for rare books and manuscripts.

Top photo: A rare first edition of "Neptuno alegórico" by Sor Juana Inés de la Cruz, the premiere poet of the Americas (1651-1695). The original booklet, which was commissioned by the archbishop of New Spain, or Mexico, in 1680, now has a home at Arizona State University. Photo by Charlie Leight/ASU Now