Joshua LaBaer, executive director of the Biodesign Institute, co-hosted a lively and innovative symposium Nov. 9, greeting the international guests in their native Chinese. After enthusiastic applause, the presentations began.

The symposium, which hosted representatives from Sichuan University and West China Hospital, in addition to researchers from the Biodesign Institute, focused on exploring strategies for the detection and treatment of infectious diseases and cancer. 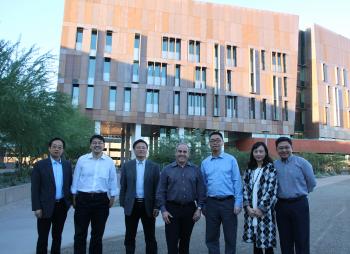 Biodesign investigators and representatives of Sichuan University and West China Hospital presented at the symposium on Nov. 9. Download Full Image

The gathering represented the most recent of many of international university collaborations spearheaded by ASU’s Biodesign Institute. Symposia like these extend existing relationships, foster new partnerships and provide a valuable exchange of ideas.

“I think Biodesign’s major objective is to translate the bench side of research to clinical applications, and we are not only looking for clinical partners in the U.S. but also for partners outside,” said Tony Hu, associate professor at the Biodesign Virginia G. Piper Center for Personalized Diagnostics and co-host of the symposium.

“The West China Hospital definitely has great facilities, and it’s a well-known hospital. Its medical research is often No. 1 in China, so it could be perfect for collaboration with Biodesign,” Hu said.

Liu Jie works in the Department of Infectious Diseases and Vaccines at West China Hospital studying the flu, RSV, MCV and cancer.

In his presentation at the Biodesign Institute, he focused on the challenges posed for vaccinating against the RSV infection. Respiratory syncytial virus, or RSV, is common, very contagious and typically infects the respiratory tracts of children before the age of 2. The (FI)-RSV vaccine, which was previously used to immunize children, is no longer in use due to the fact it enhances the disease and its associated symptoms.

Currently, the only treatments available are nucleoside inhibitors and monoclonal antibodies, and there is no licensed vaccine for the infection. Some challenges to creating a new vaccine include the fact that most patients are infected at a young age, making clinical trials less viable; the failure of the human immune system to protect the body against re-infection; and the lack of sufficient animal models to test out a new vaccine.

Ding Bisen, an assistant professor at the Weill Cornell Medical College, studies liver and lung regeneration. In his lecture, he addressed how the vascular niche can regulate fibrosis and regeneration in human lungs.

With fibrosis being the cause of death in about 40 percent of all diseases, it is important to understand how and why it takes place in the human body and what mechanisms can be targeted to prevent it. Ding presented findings that could mediate fibrosis while promoting lung regeneration.

He first proposed that vascular regulation could be used to bypass lung fibrosis. He followed this up with some background regarding lung generation, noting that endothelial cells guide organ regeneration while blood vessels instruct hepatic regrowth after injury.

Ding focused much of his research studies on the endothelial Mmp14 gene, which encodes for lung regrowth. He concluded that Mmp14 in lung endothelial cells could promote regeneration while suppressing fibrosis, in what he called a “proregenerative and antifibrotic vascular niche.”

Zhang Wengeng, a representative and member of the editorial board for the Precision Medicine Center at West China Hospital, presented on the different laboratories within the center and elaborated on their research goals.

Launched in 2014 by Weimin Li with building beginning in July 2015, the Precision Medicine Center’s mission is to “accelerate the implementation of precision medicine into clinical care.”

The center has a high throughput sequencing laboratory with a wide variety of platforms for microbial sequencing and clinical genetic testing. The lab has technology that can sequence anything from a whole genome to single-cell RNA, and is currently covering various projects, ranging from topics of genetic cancer susceptibility to the driver genes in lung cancer.

The center houses other labs including the Lung Cancer Molecular Phenotype Lab and the Molecular Imaging and Targeted Tracer Laboratory. The Industrial Technology Institute, which belongs to the center, aims to bridge the gap between hospitals and commercial companies.

Meihua Wan, a member of the Department of Integrative Medicine at West China Hospital, studies nanoplasmonic sensing and detection and its use in clinical applications.

In her presentation, she discussed exosomes as novel biomarkers for proteins, lipids and nucleic acids. She also addressed the limitations imposed on exosomes in diagnostics, citing that they are unable to directly detect tumors, the experiments are sample intensive, and the protocol is time-consuming.

She delved into the pros and cons of far-field and near-field microscopy, noting that far-field imaging takes less time, is easily operable and that the technology is conducive to high throughput techniques.

She applied these methods to the example of nonalcoholic fatty liver disease and explained the importance of early diagnosis, something nanoplasmonic detection could accomplish.

McFadden, the center director and a professor in the Biodesign Center for Immunotherapy, Vaccines and Virotherapy and the School of Life Sciences, studies novel proteins that inhibit inflammatory pathways and develops poxviruses to treat cancer.

His presentation at Biodesign covered the recent push for next-generation therapies, such as cell therapy, virotherapy and immunotherapy. He specifically touched on his research focus: oncolytic virotherapy, or the use of viruses to treat cancer.

McFadden, in his research, found that the myxoma virus, a virus specific to rabbits and non-rabbit cancer cells, could be used to treat cancer, whether it be through in situ virotherapy or through ex vivo virotherapy, to treat residual cancer. According to his results, all mice that were treated with ex vivo MYXV virotherapy were alive and disease-free.

Lindsay, the director of the Center for Single Molecule Biophysics, studies nanoscale biophysics.

Tao is the center director and a professor in the Biodesign Center for Bioelectronics and Biosensors and the School of Molecular Sciences. His research focuses on molecular electronics and nanoelectronics, chemical and biological sensors and wireless devices for mobile health and environmental applications.

In his presentation, he discussed the development of the first mobile metabolism tracker, wearable personal exposure devices, and devices that can optically image physiological parameters without having to be worn.

Lastly, in relation to new drug-discovery tools, Tao unpacked the possibility of targeting membrane proteins and small molecules with drugs, spoke to his project aimed at developing a point-of-care antimicrobial susceptibility test and discussed the potential for label-free imaging of action potentials in neurons, which could be used for diagnostic purposes and would forgo the slow and invasive patch-clamp technique.

Krajmalnik-Brown, faculty member at the Biodesign Swette Center for Environmental Biotechnology and associate faculty at the Biodesign Center for Fundamental and Applied Microbiomics, as well as a professor in the School of Sustainable Engineering and the Built Environment, studies molecular microbial ecology to enhance bioremediation and human health.

In her presentation, she covered how the gut microbiota in humans governs the immune system and signaling to the brain. Krajmalnik-Brown presented her findings, indicating that there was lower microbial diversity among autistic children. She also measured the four most differentially abundant gut bacteria, similarly finding that the relative abundance in the three of the four microbes was lower for autistic children.

To evaluate whether microbiota transfer therapy is a viable option to mediate the symptoms of autism in children, Krajmalnik-Brown treated a group of neurotypical children and a group of autistic children. The outcome was a marked reduction in the gastrointestinal symptoms associated with autism and the recruitment of beneficial microbes in the gut environment.

Sustainability is a way of life for Barrett, The Honors College alumnus Chris Jaap. And he hopes to encourage that way of life in others, establishing a $25,000 endowment to provide scholarships for Arizona State University honors students with a passion for sustainability. Jaap divides his time between San Francisco and the Sea Ranch, a planned community that emphasizes an environmentally sensi...

Sustainability is a way of life for Barrett, The Honors College alumnus Chris Jaap. And he hopes to encourage that way of life in others, establishing a $25,000 endowment to provide scholarships for Arizona State University honors students with a passion for sustainability.

Jaap divides his time between San Francisco and the Sea Ranch, a planned community that emphasizes an environmentally sensitive approach to development and “living lightly on the land.” The Sea Ranch stretches for about 10 miles along Highway 1 at the northern end of the Sonoma County coast north of San Francisco. The community spans 5,000 acres, approximately two-thirds of which is reserved open space with expansive meadows and hillsides covered by trees. 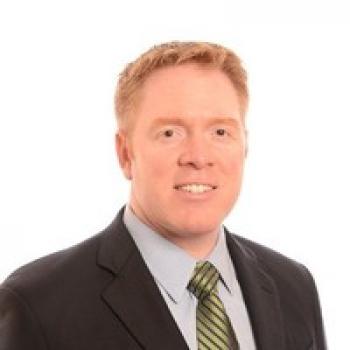 Chris Jaap, a 1995 ASU honors graduate, has supported Barrett, The Honors College as a member of its Alumni Council and by contributing to support programs associated with the Sustainability House at Barrett. Now, he has established an endowment for honors students committed to sustainability. Download Full Image

It is a place for anyone who loves the environment and who is committed to protecting it while living at the center of one of the most beautiful areas of California, said Jaap, who graduated from ASU with honors in 1995.

After serving on the community’s finance committee, he was elected to a three-year term on the board of directors in May 2018.

Jaap has a professional interest in the renewable- and smart-energy industry, having spent the majority of his 20-year career as a corporate attorney advising clients who design and manufacture renewable-energy products; develop, construct and operate power plants; and provide financing to the industry.

For years, Jaap has contributed to Barrett to support programs associated with the Sustainability House at Barrett (SHAB), a residence hall for students interested in living in an environmentally responsible way. SHAB is LEED-certified and has low-flow water fixtures, energy-efficient appliances, low-energy-use lights and thermostats and a rooftop organic garden. Jaap also has been a member of the honors college’s Alumni Council, assisting with outreach to fellow alums and contributing to the growth and success of the college.

And now his endowment — part of Campaign ASU 2020, a university-wide fundraising effort — will further encourage a passion for sustainability among students.

Jaap said gifts from the endowment will be targeted toward “mission-driven Barrett students who intend to address specific sustainability challenges on a local, regional, national or global scale” with an emphasis on the so-called triple bottom line: people, planet, profit.

Students may use the funding for tuition, research and expenses related to their honors thesis, internships, study abroad, student and community engagement and other activities.

“I was motivated by the idea that the endowment will grow over time and provide ongoing support for Barrett students indefinitely,” Jaap said.

“The principle of investing in what we have today while protecting it for the future really speaks to me. My goal is to raise additional funds every year to grow the endowment over time, maximizing the investment in Barrett’s future,” he added.

Jaap, who was a Flinn Scholar, said he chose to attend ASU largely because of the honors college, so giving back is only natural.

“Barrett offers that small liberal arts college feel with large university resources. It really is the best of both worlds. While in Barrett, I had great professors and classmates. It piqued my intellectual curiosity, and I had a terrific time,” he said, citing his experience as a reason why he wanted to establish the endowment.

“I want the college to have freedom to do what’s needed to support students and help them achieve their dreams,” he said.

“Chris is dedicated to environmental sustainability as well as to the success of his alma mater ASU and Barrett. He has been a great friend to Barrett as part of our alumni network, helping to grow its strength and value.”

Those who wish to donate to the Christopher Jaap Endowed Scholarship can do so on the Campaign ASU 2020 website.