Let’s get this bread: ASU student forms friendships through baking

Margot Plunkett is a bubbly freshman studying English in the College of Liberal Arts and Sciences.

A participant of the Early Start program, Plunkett seized the opportunity to form friendships before classes began and campus filled with thousands of students. And her friendships and connections keep growing, thanks to her new hobby: baking loaves of bread for her peers. 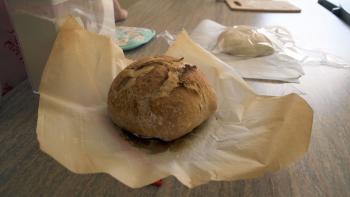 What better way to get to know a dorm neighbor than by breaking homemade bread? Download Full Image

It all started at the end of the summer when her best friend’s mom taught the two to bake bread.

“At our last sleepover before she went away to school, we learned how to make bread and I was like, ‘Wait, this is so easy!’ So I’ve been doing it ever since,” she said.

Utilizing the community kitchen space at Palo Verde West, Plunkett began baking loaves of bread every day, delivering them to people in her residence hall, classmates and even professors.

Encouraged by her friends, Plunkett started documenting her breadmaking and sharing on Instagram under the handle @365loavesofbread. She intended to make a new loaf every day but has since found she often makes more than one at a time. She estimates she’s made and gifted at least 50 since the start of the academic year.

The bread is a conversation starter and her peers have shared memories of baking bread with their own families.

“I just feel like it’s really nice to give everyone a taste of home,” she said.

Plunkett doesn’t sell the bread, instead enjoying the gift of sharing.

“(Breadmaking) has taught me more to share things with people. They get so excited; it’s just the little things that make people happy and I think that’s really sweet, that’s my favorite part."

Black Friday: Good for business but a headache for supply chain

While you have been busy planning to consume turkey, watch football games and visit with family this Thursday, American businesses large and small have been busy plotting how to get you inside their stores the next morning and on their websites in the days that follow.Black Friday takes place the Friday after Thanksgiving and traditionally signals the beginning of the holiday shopping season.You... Black Friday: Good for business but a headache for supply chain

While you have been busy planning to consume turkey, watch football games and visit with family this Thursday, American businesses large and small have been busy plotting how to get you inside their stores the next morning and on their websites in the days that follow.

Black Friday takes place the Friday after Thanksgiving and traditionally signals the beginning of the holiday shopping season.

You might be an expert at navigating the sales, promotions and big-ticket-item specials that will be offered, but do you know about Black Friday’s origins and the importance it plays in the U.S. economy? Or the recently invented retail event that has surpassed it?

To gain a better understanding of the infamous shopping day, ASU Now turned to Dale Rogers, a professor of logistics and supply chain management at the W. P. Carey School of Business. 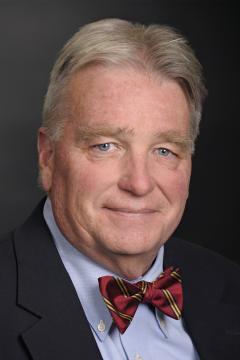 Question: Please tell us the origins of Black Friday, how it got its name, and how it became the biggest shopping day of the year.

Answer: For many retailers, the day after Thanksgiving was the day that they became profitable for the year. Over the last 20 years, retailers developed more and more schemes to bring shoppers in early on Black Friday. While this was happening to some extent during the 1990s, it accelerated during the mid-2000s and became an event for family members that perhaps had celebrated Thanksgiving the day before. It became an event to get up at 3 a.m., 4 a.m., 5 a.m. and head to the mall for the deals that would typically expire before noon.

We are seeing event-driven sales make a big impact for retailers and manufacturers who have had difficulty cutting through all the social media and advertising noise to get the word out about their product. The same things work for retailers around the world. The largest shopping day in the world occurred last week on Nov. 11 in China. Nov. 11 in China is “Singles Day,” (the date) 11/11 is all the numeral one or singles. Singles day is only 6 years old and was invented by Alibaba. More product moved that day than any other day in retail history.

If you think about an iPhone release, Apple uses a product event to build excitement about the product.

Q: What are the incentives for retailers to give such deep discounts on Black Friday?

A: The incentive is similar to any promotion. It gets people in the store or online to shop, and it moves inventory. The 21st-century consumer responds to events. While it is better for supply chain managers to level demand throughout the year, sales are dramatically increased by holding an event. Plus, if the competition is having Black Friday sales, other retailers really have no choice but to follow suit.

Q: In recent years, Black Friday has become more than just the biggest shopping day of the year; economists have been using it as an indicator of the upcoming year. Is there much of a track record to predict this accurately?

A: It is a good indicator of whether or not the fourth quarter of the year will be a good one. For most retailers, the fourth quarter is the highest revenue period and so important to analysts and investors as an indicator of the track a retailer is on. While it is not perfectly predictive of the future, it does give observers a picture of what is likely to happen in the near-term for that retailer. It is another reason that retailers have to participate in Black Friday sales.

Q: In the last decade, Black Friday has spawned new retail holidays such as Small Business Saturday/Sunday and Cyber Monday. Are these spinoffs having the same kind of impact as Black Friday?

A: As I mentioned, Singles Day is actually larger than Black Friday and Cyber Monday combined. Cyber Monday became an event because in the late 1990s through the 2000s. Shoppers usually had much better internet connectivity at their office when they went back to work on the Monday after the Thanksgiving holiday.

Q: Do you see any downside to these retail holidays?

But, they have been a hugely successful strategy for retailers and brand owners.