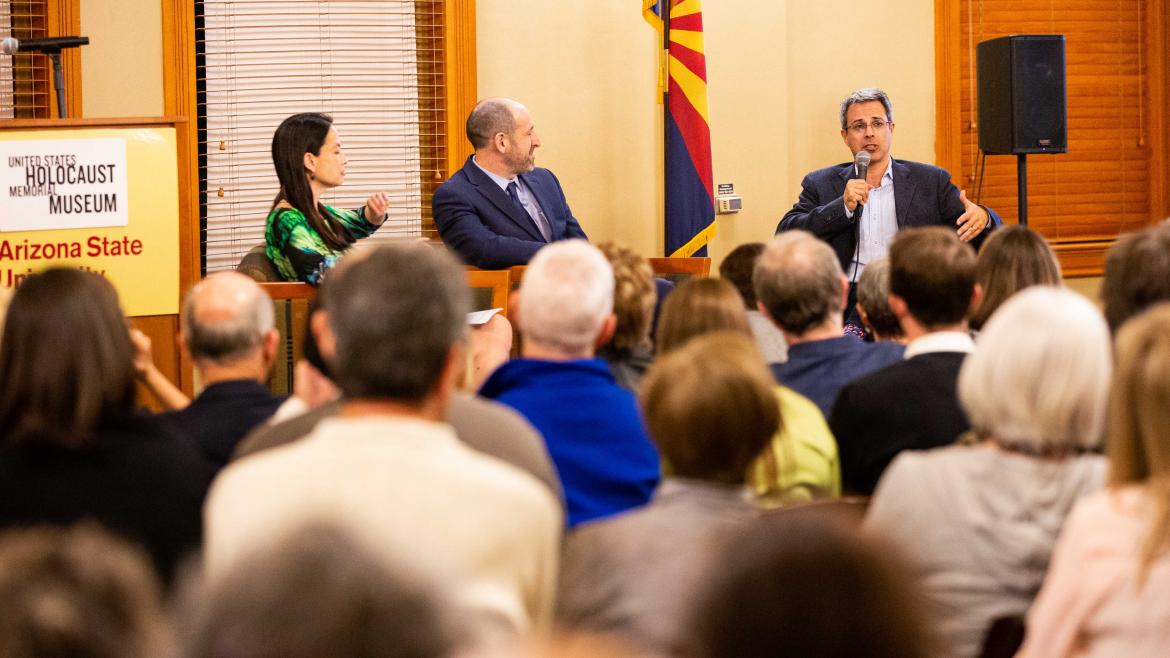 ASU and U.S. Holocaust Memorial Museum co-host event examining how Hollywood and government combatted the enemy with their own propaganda

During World War II, cartoons, posters and screwball comedies were just as deadly as panzers and Thunderbolts.

And they unified the troops to beat the Nazis, according to an Arizona State University professor.

“It was really the first time the government and Hollywood came together trying to create the themes, the iconography, the characters and the stories that helped sell the war at home and to the troops,” said Kevin Sandler, an associate professor in ASU’s Film and Media Studies program, in front of a crowd of about 250 people at Old Main in Tempe on Wednesday. “Bugs Bunny was never bigger than any time during the war. He seemed to capture that go-getter attitude, standing in the face of any enemy — and winning.”

Sandler’s appearance was part of the presentation “What Were We Watching? Americans’ Responses to Nazism Through Cinema, Radio and Media,” co-hosted by ASU’s College of Liberal Arts and Sciences and the United States Holocaust Memorial Museum.

He was joined by Daniel Greene, a curator at the United States Holocaust Memorial Museum, and Mi-Ai Parrish, a Sue Clark-Johnson Professor for Media Innovation and Leadership in ASU’s Walter Cronkite School of Journalism and Mass Communication, who served as the evening’s moderator.

The 90-minute event couldn’t have been more timely and relevant, said Hava Tirosh-Samuelson, ASU Regents’ Professor of history in the School of Historical, Philosophical and Religious Studies, and director of the Center for Jewish Studies. 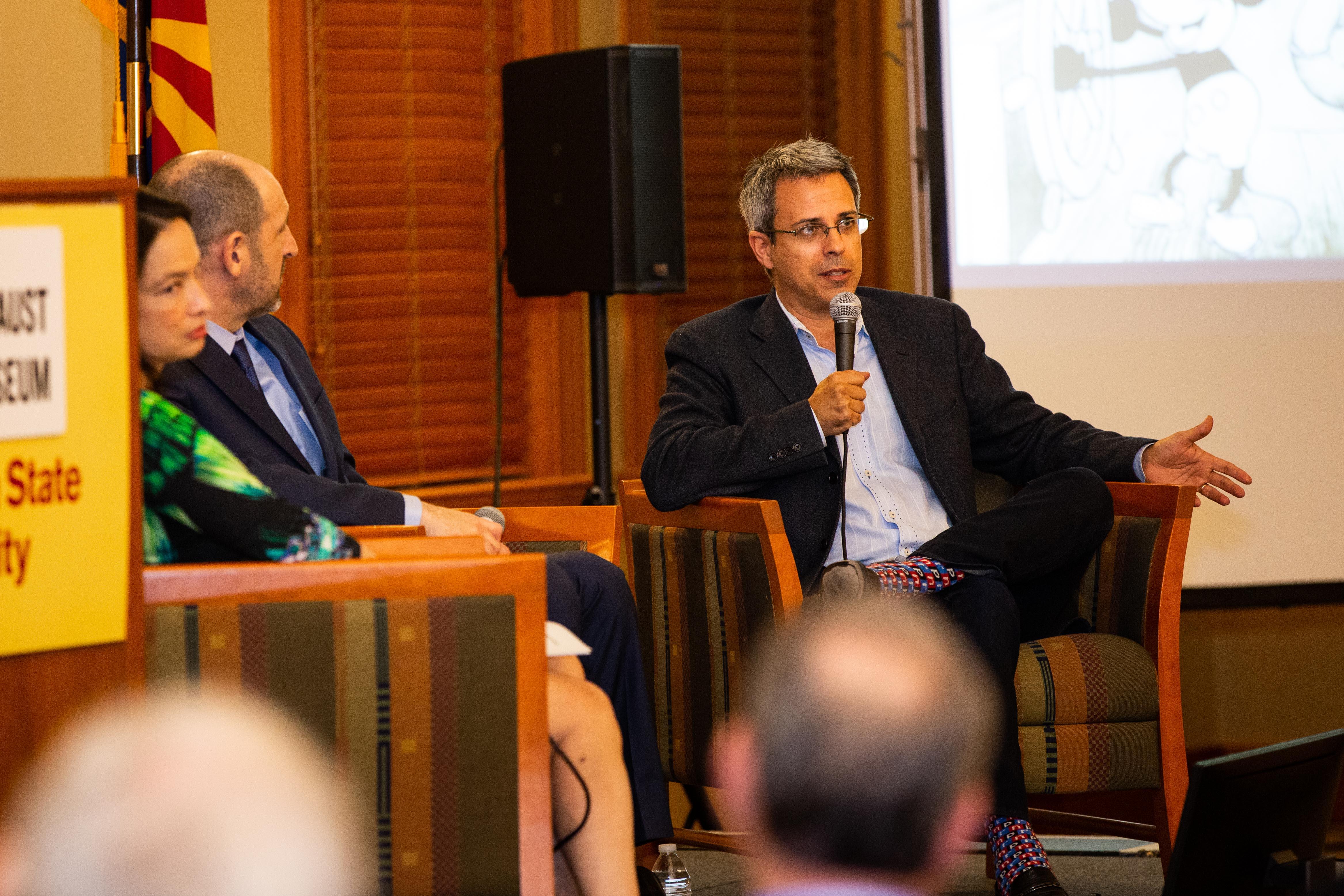 Associate Professor Kevin Sandler addresses the audience, describing how Hollywood approached films and cartoons prior to World War II during the "What Were We Watching?" lecture. Photo by Deanna Dent/ASU Now

“Anti-Semitism indeed has a long and complex history that resulted in the Holocaust — the planned annihilation of the Jewish people. If we had imagined the victory of the allies in World War II would mark the end of anti-Semitism we were mistaken,” Tirosh-Samuelson said. “Anti-Semitism did not disappear and in the past decade has reared its ugly head all over the world. A few weeks ago, 11 Jews were massacred during Shabbat services in the Tree of Life Synagogue in Pittsburgh, reminding us that America is very vulnerable to anti-Semitic, hateful propaganda and destructive actions.”

The majority of Wednesday’s discourse was offered to demonstrate how stories about World War II and the persecution of Europe’s Jews were a constant presence in American cinema and living rooms throughout the 1930s and 1940s. Award-winning films such as “Mrs. Miniver,” “The Great Dictator” and “Casablanca” helped shape Americans’ understanding of the Nazi threat while newsreels and radio programs offered a brief glimpse into world events and the range of opinions on the war effort.

Though that effort took some time to gear up — years in fact. Greene said a majority of Americans and U.S. President Franklin Delano Roosevelt were resistant to entering another world war when the Nazis came into power.

“In the 1930s, World War I is only 15 years in the rearview mirror for Americans and most Americans believed that entrance into World War I was a mistake,” Greene said. “You also had the Great Depression, and the recovery in the United States in the 1930s is not linear. There was another terrible recession in 1937 and 1938 … and oh, we also have our own xenophobia. There’s racism in America with Jim Crow and anti-Semitism, which is on the rise in the 1930s.”

Sandler said major film studios comprised about 80 percent of the spectator amusement pie at that time in America and derived almost a third of their income from Europe. A big portion came from Germany, and the industry was reluctant to badmouth the country when the Nazis invaded Poland in September 1939, which signaled the start of World War II. 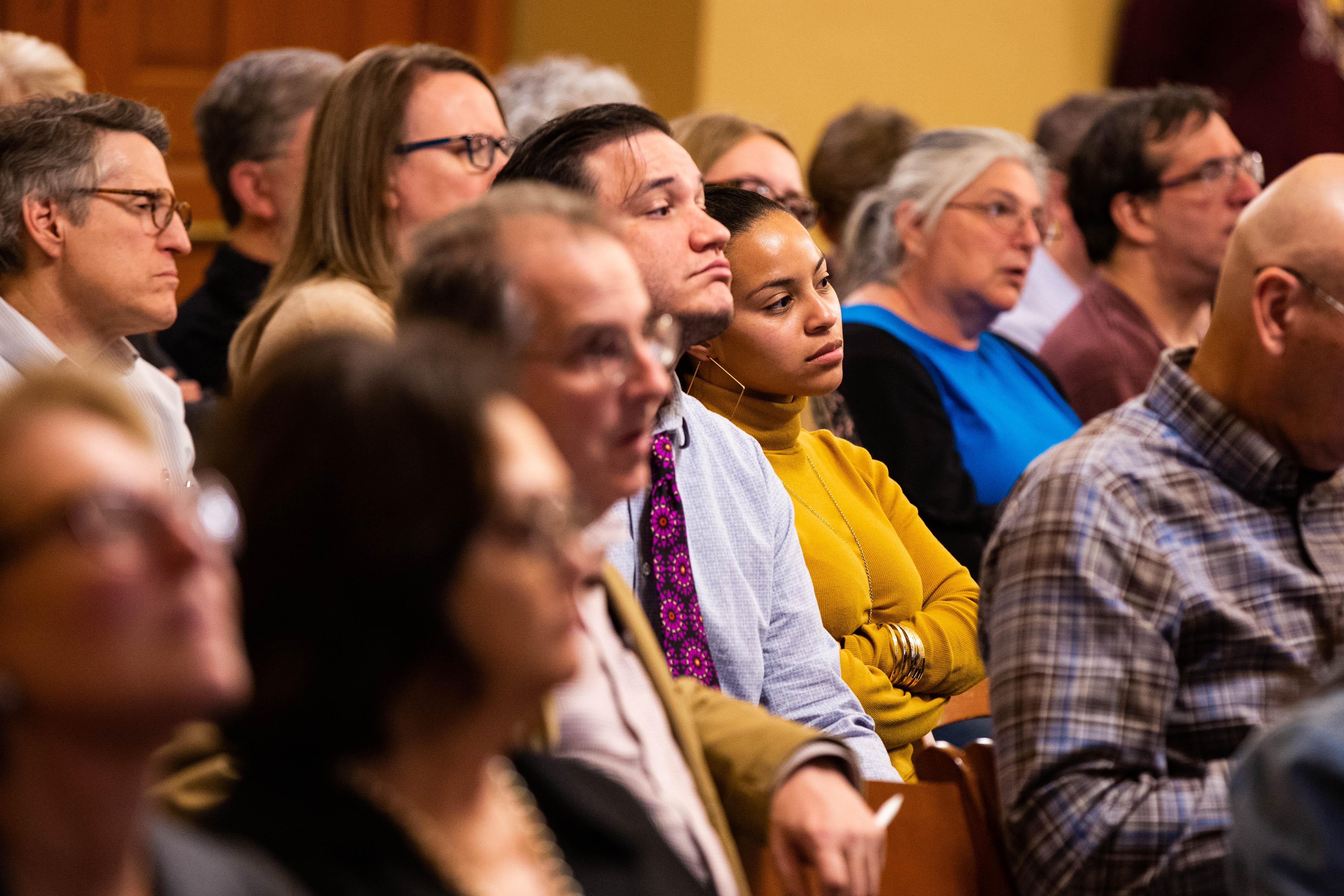 Audience members listen during the "What Were We Watching?" lecture on Wednesday evening. Photo by Deanna Dent/ASU Now

Greene said the public was aware of Nazism through newspapers and newsreel footage, usually shown at the beginning of every film. He said one newsreel, “Inside Nazi Germany,” was very powerful.

“You see the separation of Nazi Germany at the time before mass murder has begun,” Greene said. “Americans certainly had access to information about the persecution of Jews through these newsreels.”

They chose, however, to take their lead from President Roosevelt, who emphatically stated that the country would remain a neutral nation two days after the invasion of Poland. Even pilot Charles Lindbergh, the most famous American at the time, touted the idea of avoiding all foreign entanglements. Nine in 10 Americans agreed, according to Greene.

“They wanted to defend America's borders, but stay out of war,” he said.

Sandler said the tide began to change when a Warner Brothers studio rep was beaten up in Germany in 1933, and they ceased doing business with the country. Five years later they made “Confessions of a Nazi Spy," starring Edward G. Robinson, who later became one of the leading anti-Nazi activists in the movie industry.

“It was a decision made by two individuals (Jack and Harry Warner) which was selfless and led to this cycle of films like ‘Foreign Correspondence’, ‘Gunga Din’ and ‘Sergeant York,’” Sandler said. “These were films that didn’t deal directly with the events but indirectly about totalitarianism and Nazism.”

Sandler added that Charlie Chaplin’s 1940 film, “The Great Dictator” was Hollywood’s first parody of Hitler and Nazism. It also proved to be a big hit with audiences, further spreading the anti-Nazi sentiment in America. 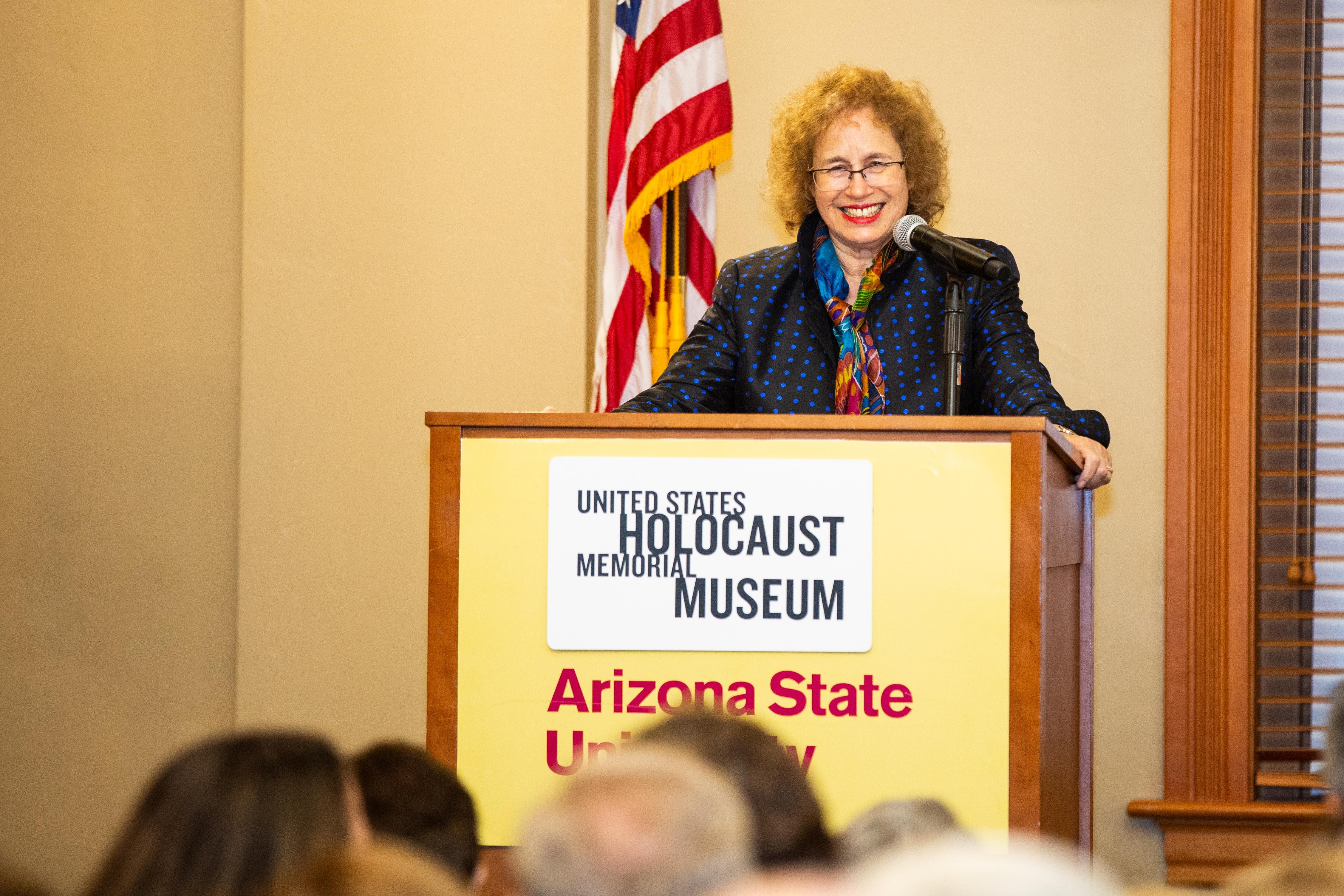 Hava Tirosh-Samuelson, director of the Center for Jewish Studies, warmly greets the audience as she introduces the speakers of the "What Were We Watching?" lecture. Photo by Deanna Dent/ASU Now

Full-on collaboration between Hollywood and the United States government didn’t take place until after Dec. 7, 1941 when Pearl Harbor was attacked, Sandler said.

"After Pearl Harbor happened pretty much all the studios get behind the war effort,” Sandler said. “What’s at stake is obviously very clear.”

Hollywood and leaders of entertainment and the government entered into an alliance and battled for the hearts and minds of Americans. They employed any means necessary, including using cartoons to sell war bonds and motivate the troops. They enlisted Daffy Duck to fight Nazis and Mickey Mouse to do battle with the Japanese. They also hired heralded filmmaker Frank Capra to produce seven short films for American troops, and Theodore Geisel to produce propaganda cartoons for newspapers.

“The government knew what it wanted but didn’t explain it very well to the people who knew how to make films,” Sandler said. “These films helped the troops become better soldiers.”

Top photo: United States Holocaust Memorial Museum curator Daniel Greene (center) addresses the audience during the "What Were We Watching?" lecture at Old Main on the ASU Tempe campus on Nov. 14, 2018. The lecture presented American responses to Nazism through media and examined the American perspective toward Nazi Germany and Jewish persecution. Photo by Deanna Dent/ASU Now

TEMPE – With the indoor track and field season just over a month away, director of track and field Greg Kraft and the Sun Devil program has announced ASU's 2019 track and field schedule that features three home meets, some familiar away meets and a handful of new events. ... TEMPE – With the indoor track and field season just over a month away, director of track and field Greg Kraft and the Sun Devil program has announced ASU's 2019 track and field schedule that features three home meets, some familiar away meets and a handful of new events.