Arizona State University celebrates innovation every day. Once a year, the state of Arizona shines a light on those who do it best. This year, ASU researcher and Professor Ferran Garcia-Pichel and his lab were recognized as finalists for the Governor’s Innovator of the Year – Academia award.

The finalists were acknowledged at the Governor’s Celebration of Innovation event on Thursday, Nov. 8, at the Phoenix Convention Center. The award ceremony was held in partnership with the Arizona Technology Council and the Arizona Commerce Authority to encourage innovation and recognize Arizona’s leaders in technology and innovation. 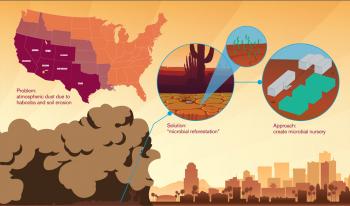 Ferran Garcia-Pichel’s lab is developing new technologies to restore the desert’s crust, exemplified by its microbial nurseries. Much like reforestation, these nurseries are growing microbiomes that can be planted in the soils. Download Full Image

“Our state is no longer content to rely upon traditional models focused on incremental growth,” Gov. Doug Ducey said. “In Arizona, we’ve pioneered transformation. We’ve become a state of disruptors, intent upon pursuing new ideas, and we’ve created the best environment in which to develop, test and scale cutting-edge technologies.” Ducey shared that 274,000 new jobs have been created in Arizona since 2015.

Garcia-Pichel is one of many in the state-wide effort to contribute to the scientific community. Recognizing their efforts is an important part of inspiring cutting-edge research across the state.

As a finalist for the Innovator of the Year Award in academia, Garcia-Pichel, a microbiology professor with ASU’s School of Life Sciences and director of the Biodesign Center for Fundamental and Applied Microbiomics, and his lab were recognized for their work in restoring the desert soil’s natural protective crusts through the use of what they call “microbial nurseries.”

Yasin Silva and Deborah Hall from ASU's West campus were also recognized as finalists for their BullyBlocker app, which employs predictive models and identification tools through social media to detect cyber bullying.

The winner in the academia category is Laurence Hurley, associate director of the BIO5 Collaborative Research Institute and co-director of the Molecular Therapeutics Program at the University of Arizona Cancer Center. Hurley’s research focuses on targeting DNA on a molecular scale in order to inhibit its transcription, and he founded TetraGene, a biotech company that aims to control the expression of undruggable targets.

“Shining a light on Arizona’s leading innovators inspires us all to do better,” said Sethuraman Panchanathan, executive vice president of ASU’s Knowledge Enterprise and chief research and innovation officer. “At Arizona State University, we are in constant pursuit of new ideas — especially ideas that make our world a better place. Professor Garcia-Pichel’s work in taming the desert dust through the development of microbial nurseries is an outstanding example of use-inspired research and our commitment to our fellow citizens of Arizona.”

This form of recognition serves as a testament to the importance of Garcia-Pichel’s research to Arizona’s environment.

“We are fortunate to count Dr. Garcia-Pichel among our team of dedicated researchers,” said Joshua LaBaer, executive director of the Biodesign Institute. “We commend Governor Ducey for recognizing the important work he and his team are doing to preserve our health and environment.”

Garcia-Pichel’s lab was nominated for the award by Bert Jacobs, an ASU virology professor and the director of the School of Life Sciences. Jacobs believes that Garcia-Pichel’s work could lead to important applications, and it represents a good model for sustainable solutions.

Garcia-Pichel’s lab is developing new technologies to restore the desert’s crust, exemplified by its microbial nurseries. Much like reforestation, these nurseries are growing microbiomes that can be planted in the soils.

The first large-scale trial of this technology will take place in New Mexico in spring 2019.

Garcia-Pichel believes this recognition is vital, especially in shedding light on his innovative strategies and in changing the public’s perception of what can be done.

“Having local recognition for innovation is important to us. It makes us feel that our work is relevant,” he said. “Humans are creatures of habit, so when you are innovative, you may have to knock at the door recurrently because people tend to know just what they know. This recognition can be very important in reaching our long-term goals by giving us exposure.”

Arizona State University’s global footprint keeps expanding, including on the basketball court. The Pac-12 announced a 2019 men's basketball matchup between ASU and the University of Colorado Boulder, the fifth edition of the Pac-12 China Game presented by Alibaba Group.The November 2019 game will be co-hosted by longtime Pac-12 partner Federation of University Sports of China, which operates un...

Arizona State University’s global footprint keeps expanding, including on the basketball court. The Pac-12 announced a 2019 men's basketball matchup between ASU and the University of Colorado Boulder, the fifth edition of the Pac-12 China Game presented by Alibaba Group.

The November 2019 game will be co-hosted by longtime Pac-12 partner Federation of University Sports of China, which operates under China’s Ministry of Education. 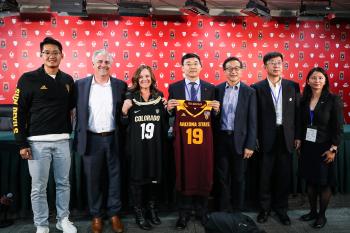 “We are thrilled for the tremendous opportunity to showcase all the energy, investments and innovative ideas our campus has been working on and for a great educational experience for our student-athletes in China,” said Ray Anderson, ASU vice president for university athletics.

“We already partner with many of the top Chinese universities, as well as the Chinese Academy of Sciences and Ministry of Science and Technology, so being part of this event is a natural step and one ASU embraces,” Anderson said.

Next year’s matchup will not only allow the ASU basketball athletes to engage beyond the United States, but the university will continue to engage students, alumni and partners to connect with the university outside of the big game.

ASU is a leader of innovation in American higher education, expanding use-inspired research beyond Arizona and engaging with people and issues locally, nationally and internationally. Through relationships with China and the Chinese people, the university works to promote language, innovation, business and leadership on a global scale.

Over the last decade, ASU has pursued a deepening relationship with China and Chinese students and universities through multiple collaborations.

The W. P. Carey School, ranked one of the top 25 business schools nationally, is directly involved in the development of top leadership in China. In partnership with Shanghai Advanced Institute of Finance, W. P. Carey launched a Doctor of Business Administration in Global Financial Management program at Shanghai Jiao Tong University where senior executive leaders can tap into the expertise of distinguished international thought leaders.

ASU's work with China and with Chinese institutions prepares students for a future in a high-speed, technologically advanced, globally competitive economy. To date, ASU has more than 2,400 alumni in China, with the largest number of graduates from the W. P. Carey School of Business with more than 1,500 graduates.

The Pac-12 China Game is the flagship event of Pac-12 Global, designed to grow the global popularity of Pac-12 athletic programs and universities, fostering cultural exchange through sport and creating educational experiences for Pac-12 student athletes. The matchup between the Sun Devils and Buffaloes, tentatively scheduled for Saturday, Nov. 9, and for national broadcast in both the U.S. and China, will not count as a conference contest.