It’s official: Arizona is now a battleground state. This, according to Margie Omero, one half of the “The Pollsters” podcast duo rounded out by Kristen Soltis Anderson.

Omero, principal at GBA Strategies with more than 20 years of experience managing all facets of qualitative and quantitative research, and Soltis Anderson, a pollster and co-founder of the research and analytics firm Echelon Insights, visited Arizona State University’s Tempe campus Tuesday evening as guest speakers for the School of Civic and Economic Thought and Leadership’s final 2018 “Polarization and Civil Disagreement” public talk.

Over the course of a couple of hours, a room of about 200 students, faculty, staff and community members listened as Omero, a Democrat, and Soltis Anderson, a Republican, analyzed the results of the 2018 midterm election and reviewed stats, trends and key points.

“It’s really a source of joy to have this bipartisan moment,” Omero remarked at the beginning of the event. “I get a lot of questions about my friendship with Kristen. … We really do get along.”

School of Civic and Economic Thought and Leadership Director and Professor Paul Carrese moderated the discussion, which began with each speaker going over what she determined to be the biggest takeaways.

For Soltis Anderson, there were three:

Following the 2016 election, Soltis Anderson said she gave the polling industry a grade of C-plus because of some key marquee races that they got wrong. However, this time around, she said, “The pollsters got it pretty close to right,” upgrading her C-plus to a B-plus.

2. The idea of red states and blue states is increasingly outdated.

Though several headlines reported red states getting redder and blue states getting bluer, Soltis Anderson believes the density of the area in which you live might tell someone a lot more about how you vote than whether you’re in a “red state” or a “blue state.”

“The last couple elections, suburbs leaned slightly Republican,” she said, but this election showed that the GOP is losing them. “Even if it’s by a small margin, that will have huge electoral consequences, as we saw by the number of House seats Democrats were able to pick up. So looking at a map can be misleading,” because cities that are blue might appear smaller but are more population-dense.

3. Many hugely influential voting blocs moved away from the GOP.

“Typically in a lame election, one party is energized and the other is depressed,” Soltis Anderson said, providing the 2010 and 2014 elections in which Republicans were energized and turned out to the polls, whereas Democrats stayed home, as examples.

This year, though, the shoe was on the other metaphorical foot.

“Given the results,” she said, “President Trump should be nervous about his re-election chances.”

“Republicans have got to catch up with the demographic of cultural changes (and convey) a message that speaks to a broader group of people,” Soltis Anderson said.

1. The expectation that we would see an increase in female candidates and voters was correct.

There are now roughly 100 new members of Congress who are women, and two women ran against each other for a Senate seat in Arizona. Omero said this is something that doesn’t happen very often for a variety of reasons, but two that are notable are a majority of Americans who feel Trump doesn’t respect women and the fact that so many women voted in this election.

“Women really did set the pace, as voters and as candidates this time around, more than even before,” she said.

“It’s important to look at individual candidates and how their campaign was run,” Omero said.

Candidates who eschewed demonizing one party over the other and instead focused on issues like health care tended to do better.

3. Candidates struggled with how to talk about Trump.

Whether they were “Trump huggers” or “Never Trumpers,” candidates who expressed an opinion about the president one way or another tended to alienate voters. 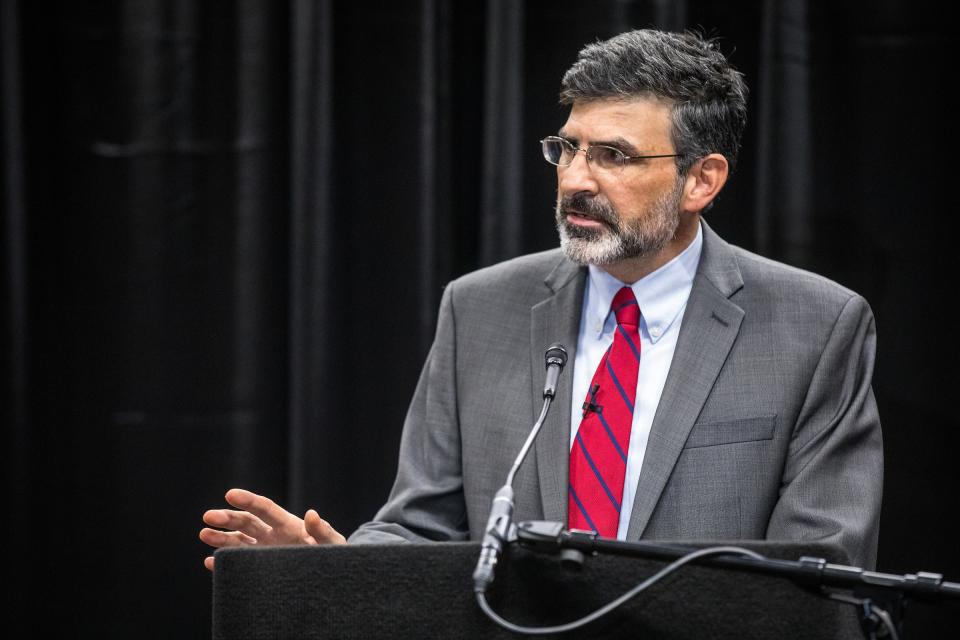 Following their debriefings of the midterm results, Carrese posed a handful of questions to the pollsters, ranging from how Republicans might interpret the outcome, to the absence of a dominant party, to how women in office might approach issues differently than their male counterparts.

“I think in politics, people think very short term,” she said. “I don’t think one party has figured out the magic formula and are going to be winning forever. … (At the moment), the polls are still trending … against Republicans.”

Though many are celebrating the unprecedented female presence in political offices following the election, Omero cautioned that it doesn’t necessarily mean there will be a sea change in governing.

The evening closed with questions from the audience. Several came from students affiliated with the Young Democrats, the College Republicans, Bridge ASU and Undergraduate Student Government.

Hanna Salem, a member of the Undergraduate Student Government on the Tempe campus, asked about the role of student organizations to promote civic engagement.

While conventional wisdom says that young voters don’t participate, Soltis Anderson felt this election was an exception and that particularly on college campuses, peers have the power to influence one another.

“This is a really big school in what is now considered a battleground state,” Omero added. “You guys hold all the cards.”

The “Polarization and Civil Disagreement” series will continue in 2019, picking up Jan. 24 with a talk titled “Bringing America Together” with Arthur Brooks.

Top photo: Kristen Soltis Anderson (left) and Margie Omero, hosts of the podcast "The Pollsters," offer their bipartisan views on the 2018 midterm elections at the Memorial Union on Tuesday evening. More than 200 people listened to the discussion, part of the School of Civic and Economic Thought and Leadership's annual lecture series on "Polarization and Civil Disagreement." Photo by Charlie Leight/ASU Now

Arizona State University has more than 3,000 Native American students, and a group of them has created a powerful proposal to redesign the campus to reflect their culture. The ideas include adding pottery symbols to Sun Devil Stadium, building a “welcome wall” to include the languages of the 22 tribes in Arizona, and building a storytelling pavilion and gathering place.The concepts came from s... 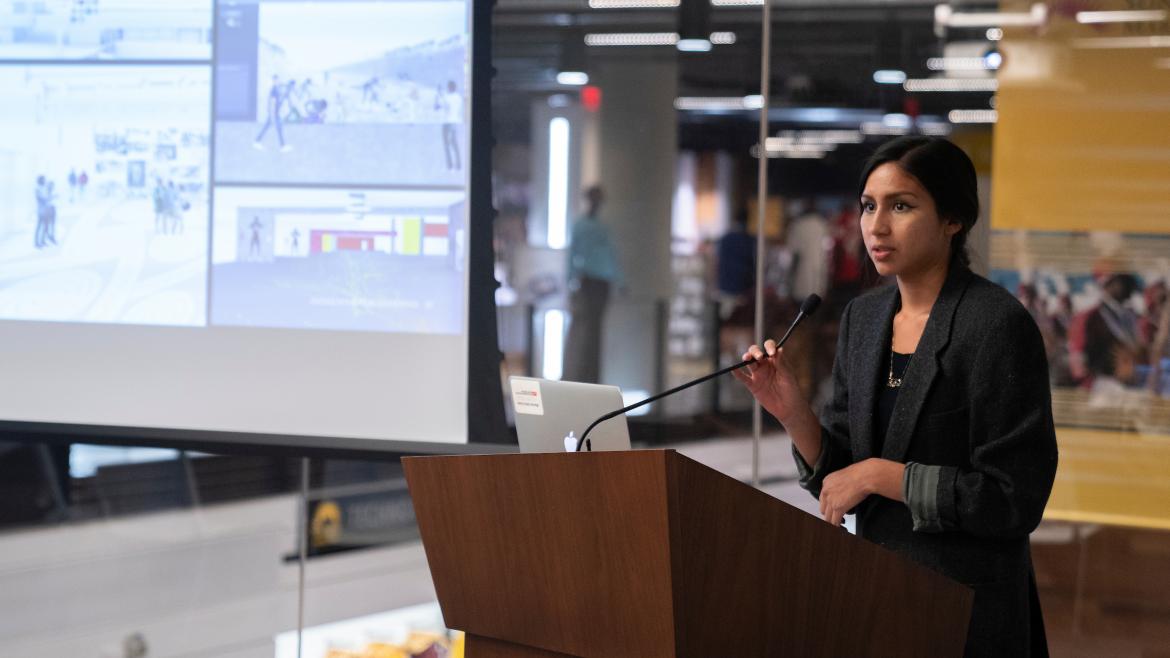 Arizona State University has more than 3,000 Native American students, and a group of them has created a powerful proposal to redesign the campus to reflect their culture. The ideas include adding pottery symbols to Sun Devil Stadium, building a “welcome wall” to include the languages of the 22 tribes in Arizona, and building a storytelling pavilion and gathering place.

The concepts came from six Native American students who took a studio course last year with Wanda Dalla Costa, Institute Professor in the Herberger Institute for Design and the Arts. Dalla Costa said that when she came to ASU three years ago to teach construction management, she didn’t see any Native American representation.

“To be honest, I looked around and said, ‘Where are the historical markers of the people who lived in this place?’ I could only see them when I drive on the highways,” she said.

So the students worked on ways to use design to bring representation to the campus and came up with 16 proposals. Their work, and Dalla Costa’s ethic of “design sovereignty,” has been gathered into a new book, titled “Indigenous Placekeeping: Campus Design + Planning.”

Dalla Costa, a member of the Saddle Lake First Nation in Alberta, Canada, and the first First Nations woman to become an architect in Canada, believes that local communities should control the design practice.

Dalla Costa and the students held a design workshop on Tuesday evening to unveil the new book and to engage the community in their ideas. The event was part of Native American Heritage Month, co-sponsored by ASU Alliance of Indigenous Peoples and the Center for the Study of Race and Democracy. The original studio course was sponsored by the Office of the President and the Office of American Indian Initiatives. 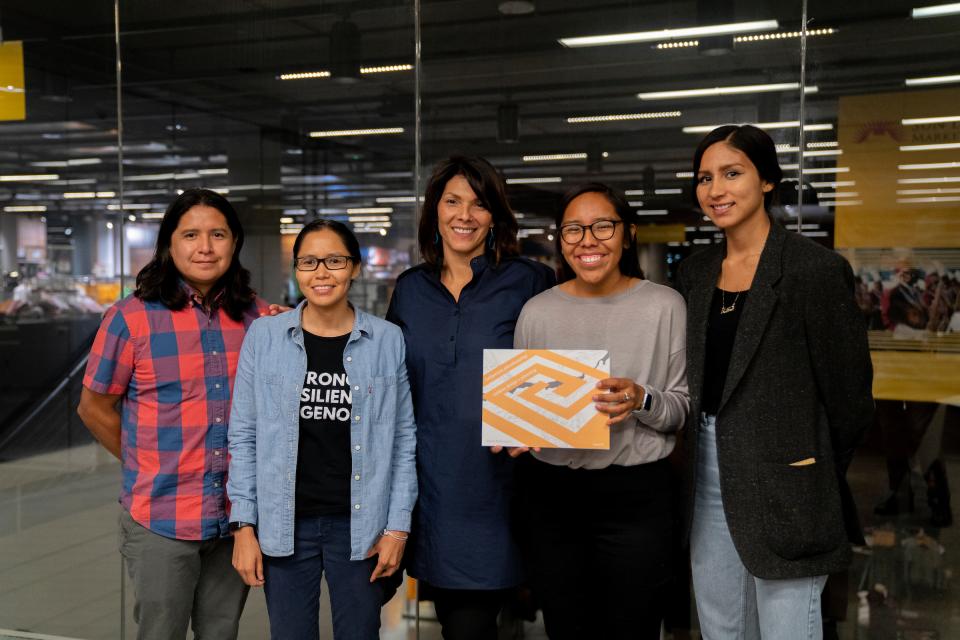 Several of the students’ designs incorporated imagery of the map of canals created by the Hohokam Indians, which led to the creation of Phoenix. The map is on the cover of the book as well.

“This is the most important aspect of the city. The canals still exist,” Dalla Costa said.

“The Hohokam people used sticks to dig canals to bring water. They are the original placemakers.”

Among the 16 projects is an idea by architecture student Selina Martinez, a Pascua Yaqui tribe member, to embed the canal map in the glass façade of the Arizona Room in Hayden Library, which is currently being renovated.

Lauren Slim, a landscape architecture graduate student, proposed a “welcome wall,” which would include a phrase of welcome from each of the 22 tribes in Arizona.

Brian Skeet, a Navajo student who is majoring in industrial design, proposed a multi-level structure based on the traditional maze design. Each level would be dedicated to a different activity, including congregation, rejuvenation and celebration.

“This is basically where people can come and feel like they’re at home,” he said.

“It’s inspired by the maze because it’s about your journey through life. With each level, you’re going through different phases of life.”

“It’s inspired by Navajo rug weaving, which is one of the ways tribes tell stories,” said Harvey, who is Navajo.

“I wanted to do an outside space to emphasize the relationship with nature and keep it grounded.” 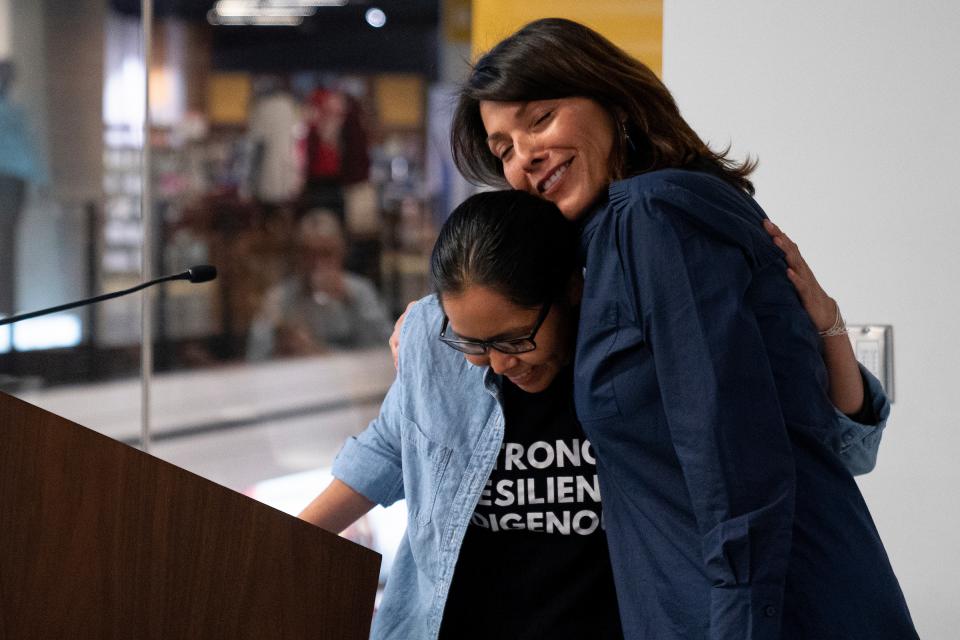 Not all of the proposals were visual. Ravenna Curley, an industrial design student and Navajo, reworked ASU’s design aspirations into “Indigenizing ASU’s Design Aspirations,” to be used to rework degree programs and coursework to incorporate indigenous cultures.

“I had a hard time finding my place at ASU. It was a whole culture shock coming from the rez,” she said.

For example, the design aspiration “leveraging our place” becomes “Acknowledging local people of this land and recognizing that this campus is on indigenous lands included on all course syllabi.”

“This is Native land,” Curley said, “and we don’t acknowledge it anywhere on campus, and that’s kind of sad.”