ASU-based technologies continue to flood the market, with a boost from Skysong Innovations

“By every metric, Skysong Innovations has built a tech transfer organization that stands as a leader among the top research institutions,” said Sethuraman “Panch” Panchanathan, executive vice president and chief research and innovation officer of Knowledge Enterprise Development at ASU. “There is simply no better university anywhere for researchers with ideas that can change the world.” 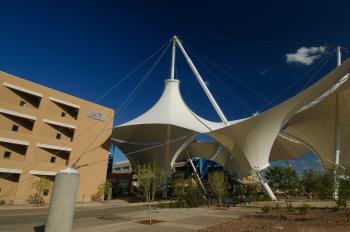 SkySong, the ASU Scottsdale Innovation Center, is one of the premier economic engines in the Valley. Download Full Image

All this activity is generating substantial local economic impact. Recently, the Seidman Research Institute examined ASU’s tech transfer impact between 2016 and 2018. As a result of the operations of Skysong Innovations and 40 ASU-linked companies, Arizona’s economy gained a cumulative:

In total, the cumulative economic impacts of these entities is projected to exceed $1 billion by 2022.

The 123 issued U.S. patents almost doubled the number achieved at ASU as recently as 2016. A new report by the U.S. National Academy of Inventors and the Intellectual Property Owners Association now places ASU in the top 20 of all universities worldwide for U.S. patents awarded. ASU jumped 13 spots in the new rankings, ahead of Columbia University, University of Washington and Duke University. Other universities ranked alongside ASU in the top 20 include MIT, Stanford University, Johns Hopkins University, Harvard and Caltech.

“The rate at which ASU is producing high-quality innovations is a testament to both the caliber of the university’s knowledge enterprise and the success of our technology transfer model, which fast-tracks research from lab benches to commercial application,” said Augie Cheng, CEO of Skysong Innovations, which manages ASU’s technology portfolio.

ASU’s track record of producing and promoting successful startups now extends more than a decade. In FY18, ASU-linked companies received over $50.5 million in total venture funding, bringing the total amount of funding raised by ASU-linked startups to almost three-quarters of a billion dollars.

To help other startups address their capital needs, Skysong Innovations launched a new acceleration program for ASU spinouts in FY18. All startups in the program go through a 14-week professional mentorship program supported by the office of Entrepreneurship and Innovation (part of Knowledge Enterprise Development) and the ASU Venture Devils. Up to six startups may also be selected for a $20,000 seed investment, with the potential for one startup to be awarded an additional $30,000 at the end of the acceleration period.

The ASU California Center continues to be the Southern California hub for Skysong Innovation’s entrepreneurial activities, providing exposure for ASU and facilitating meetings and contacts with the investment community. In FY18, Skysong Innovations and the Los Angeles Venture Association collaborated to host 19 events, including three SoCal Startup Mill pitch meetings. The SoCal Startup Mill has now grown to a network of 17 accomplished entrepreneurs and business executives.

In 2018, Skysong Innovations became the only nonlocal university member of the Alliance for SoCal Innovation. This group links innovators to capital and experienced operators throughout California.

The alliance’s launch event drew over 160 attendees, including more than 50 venture investors. A diverse blend of entrepreneurs, executives and innovators also came to connect with representatives of SoCal’s innovation centers and to learn how to access these emerging opportunities.

Of more than 90 university startup applicants, only four were selected to present, including the ASU startup Charlot Biosciences. Charlot, which develops novel cell-sorting equipment, is currently in negotiations with several Silicon Valley venture funds.

A February paper published in the Nature journal of biotechnology detailed how the efforts of two researchers at the ASU Biodesign Institute are pioneering developments in “DNA origami”: lab-engineered, self-folding DNA nanostructures that can be programmed to fight cancer and other infectious diseases, radically transforming how medical therapies are delivered.

ASU has optioned its rights to the technology to a new startup company called Nanobot Biosciences, which is working to develop nano-sized robots that can navigate the human body through the bloodstream to deliver treatments.

Professors Yung Chang and Hao Yan’s research teams are now setting their sights on the groundbreaking potential their work might carry within and beyond the medical community. Their discoveries could generate unprecedented solutions for some of the most complex problems in nutrition, agriculture, biosustainability, energy and even defense.

Two additional ASU-linked startups received FDA clearance for clinical applications. Endovantage simulates the effect endovascular implantations and subsequent blood flow changes will have in a patient’s body, aiding surgeons and medical-device manufacturers. NeoLight’s portable phototherapy beds are being used in the U.S. and developing countries to treat jaundice, which can be fatal in infants.

In addition to a full slate of candidates, Arizona voters will also consider five propositions on the ballot in the November 2018 general election.The Morrison Institute for Public Policy at Arizona State University has examined each measure to offer voters an independent and nonpartisan assessment. David Berman, senior research fellow at the institute, examined documents and views expressed by su... Ballot measures address critical issues, but the wording can be confusing to voters

In addition to a full slate of candidates, Arizona voters will also consider five propositions on the ballot in the November 2018 general election.

The Morrison Institute for Public Policy at Arizona State University has examined each measure to offer voters an independent and nonpartisan assessment. David Berman, senior research fellow at the institute, examined documents and views expressed by subject-matter specialists and those who support and oppose particular measures.

The result is "Understanding Arizona's Propositions," which provides information on each ballot proposal, how each came about, what it would do if passed and its likely impact.

• Proposition 125 addresses funding of the pension plans for corrections officers and elected officials.

• Proposition 126 seeks to avoid additional or increased taxes on some services.

• Proposition 127 would amend the state consititution to require Arizona utilities to provide at least 50 percent of their electricity from renewable sources by 2030.

• Proposition 306 would curtail the authority and independence of the Arizona Citizens Clean Elections Commission, a nonpartisan entity created by voters to provide education, campaign funding and enforcement of campaign finance rules.

Berman answered some questions from ASU Now about propositions:

Question: What is a proposition, and why are they important?

Answer: We are talking about measures that are put on the ballot by lawmakers or citizen action through a petition drive. In Arizona, they have often involved major matters of public policy, such as women's suffrage, clean elections and term limits. Overall, propositions provide a democratic safety valve through which the voters can bypass legislative inaction, challenge governmental policies and require their consent before lawmakers can take various actions.

Under the Arizona Constitution, people can use the initiative to adopt laws and to amend the constitution. In Arizona, a compulsory referendum is used when, by law, certain propositions, such as a constitutional amendment or a bond issue, must be submitted to a popular vote. One also finds a veto, also known as a citizens' or protest referendum, through which a specific number of voters, through a petition, may force a measure passed by the Legislature to be submitted to a popular vote.

The initiative and referendum are also found on the local level, in regard to the basic documents called charters and local laws known as ordinances. Here one also finds bond elections and elections in which voters are asked to increase local budgets. In an override election, for example, voters are asked by a school district to allow an increase to their district’s budget to pay for such items as teachers' salaries and equipment.

Q: Sometimes it seems like propositions are very confusing. Why is that?

A: Voting on propositions can be challenging. They are often written in confusing legal terms, and voters often hear conflicting accounts of what they will do.

The complexity of the measures and the distortions caused by the media campaigns for and against certain propositions complicate the task of the voters seeking information. Voters are often faced with many technical questions about which they have been given little information. Unless well-known personalities or major issues are involved, elections of this nature do not draw much public attention or participation. Not surprisingly, 25 percent or more of the voters who make a choice among gubernatorial candidates fail to express their views on one or more of the propositions on the same ballot.

Q: What can we do about the information problem?

A: What we have tried to do at the Morrison is distill down a large amount of information to enable the voters to understand the background of the issues involved, the essential elements in the propositions, and arguments made both for and against their adoption. The idea is to help them make a more informed choice.