Arizona State University celebrates innovation every day. Once a year, the state of Arizona shines a light on those who do it best. This year, ASU researcher and Professor Ferran Garcia-Pichel and his lab have been named a finalist for Innovator of the Year, Academia for the Governor's Celebration of Innovation.

The other finalists are Laurence Hurley at the University of Arizona, and Yasin Silva and Deborah Hall of ASU's New College at the West campus. Silva and Hall are being recognized for their BullyBlocker app, which employs predictive models and identification tools through social media to detect cyberbullying. 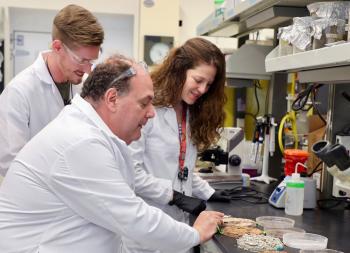 Ferran Garcia-Pichel, director of the Biodesign Center for Fundamental and Applied Microbiomics, and his lab are being recognized for their work in restoring the desert soil’s natural protective crusts. Download Full Image

The winner will be named at a gala awards event on Nov. 8 at the convention center in downtown Phoenix. The Governor’s Celebration of Innovation is held in partnership with the Arizona Technology Council and the Arizona Commerce Authority to encourage innovation and recognize Arizona’s leaders in technology and innovation.

Garcia-Pichel, a microbiology professor with ASU’s School of Life Sciences and director of the Biodesign Center for Fundamental and Applied Microbiomics, and his lab are being recognized for their work in restoring the desert soil’s natural protective crusts through the use of what they call “microbial nurseries.”

Because particulate matter coming from exposed soil is a large contributor to air pollution in Arizona, particularly in Phoenix and Tucson, this technology could hold a great deal of importance to the Southwest’s deserts and the humans who inhabit them.

“This award is important because we put a significant amount of effort in the last five to six years — not just myself, but the group of students working with me. We are really excited about being able to do something of immediate potential; there has been a lot of potential stakeholder interest,” Garcia-Pichel said.

Garcia-Pichel’s lab was nominated for the award by Bert Jacobs, an ASU virology professor and the director of the School of Life Sciences. Jacobs believes that Garcia-Pichel’s work could lead to important applications, and it represents a good model for sustainable solutions.

“Ferran and his lab have been very active in translating their basic research on the microbiology of desert soils into innovative approaches for solving some of the local and global problems associated with human-mediated degradation,” said Jacobs, also a researcher in the Biodesign Center for Immunotherapy, Vaccines and Virotherapy.

Arid land soils, a common characteristic of Arizona’s desert, are prone to erosion and degradation, particularly when exposed to harmful human activities and variable weather conditions. The topsoil typically has a naturally occurring microbiome that protects the soil from erosion. When this portion of the crust is disrupted, it is left vulnerable to the elements, yielding fugitive dust.

“There are natural and human disruptions (to the crusts),” Garcia-Pichel said. “Physical forces can cause significant damage, so of course, large-scale operations like cattle-ranching, agriculture, sprawl and human activities like driving and walking — those all tend to have a negative impact now. That isn’t to say those microbial communities don’t have natural enemies like fire, increased drought, climate warming — those are going to impact the communities as well.” 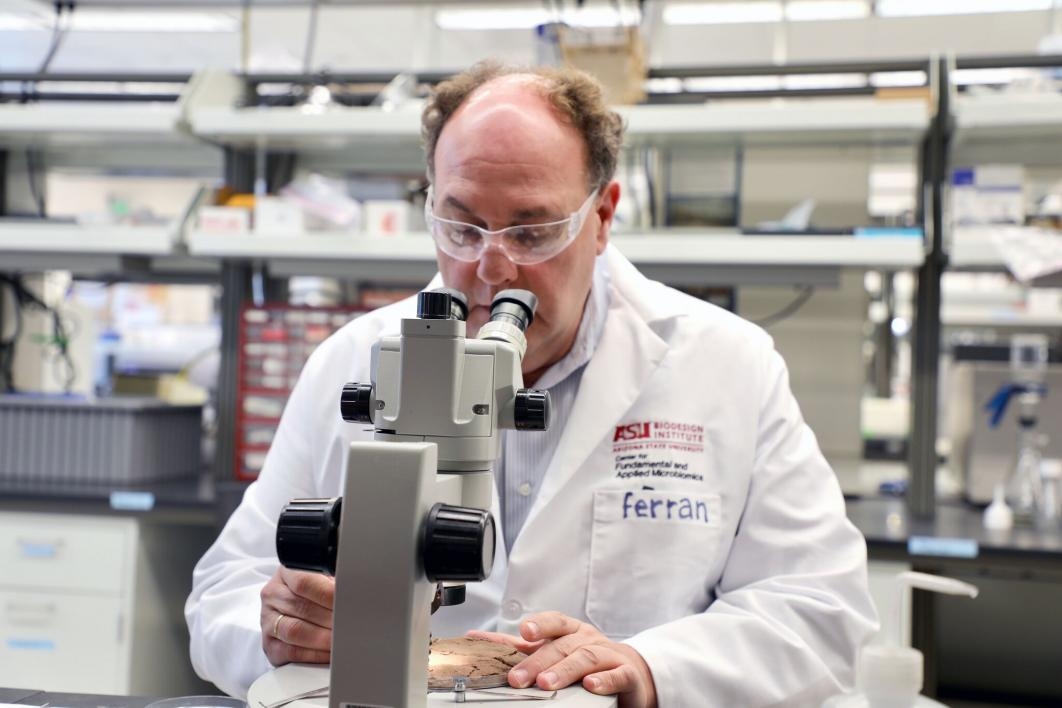 Ferran Garcia-Pichel, director of the Biodesign Center for Fundamental and Applied Microbiomics, and his lab are being recognized for their work in restoring the desert soil’s natural protective crusts. 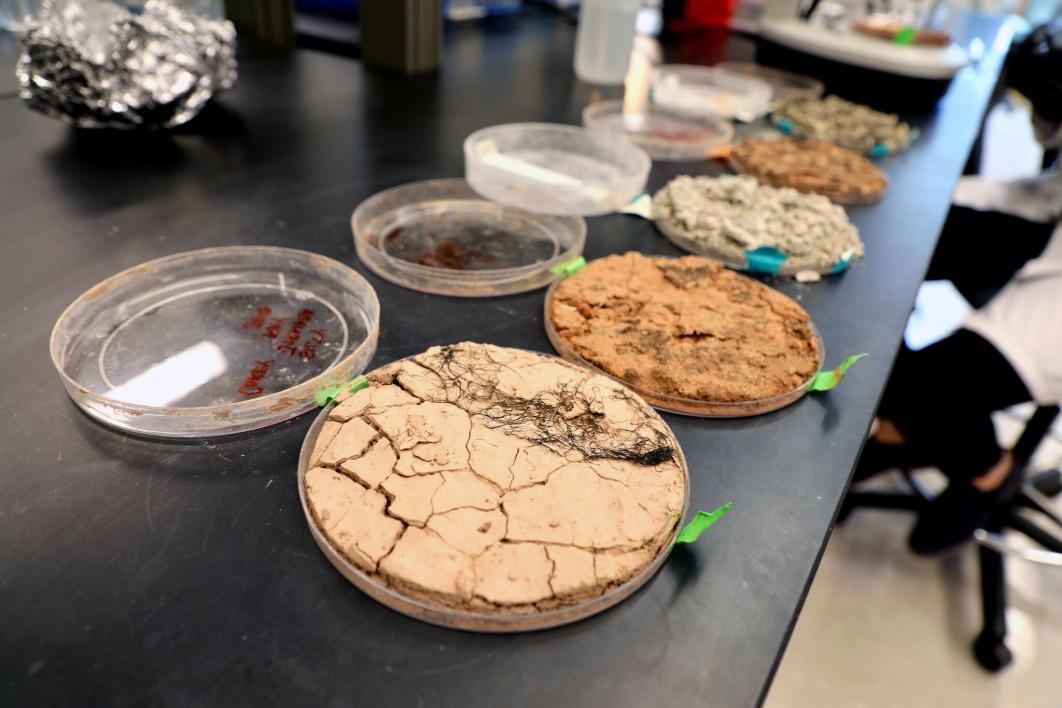 Arid land soils, a common characteristic of Arizona’s desert, are prone to erosion and degradation, particularly when exposed to harmful human activities and variable weather conditions.

Garcia-Pichel’s lab is developing new technologies to restore this crust, exemplified by its microbial nurseries. Much like reforestation, these nurseries are growing microbiomes that can be planted in the soils.

“If they can scale up this approach in the next phase, it could mean a simple, natural and self-sustaining solution to the loss of soil and air quality in Arizona and many other impacted arid lands,” Jacobs said.

Developed in the last five years, these microbial nurseries were originally part of a project funded by the U.S. Department of Defense in an effort to implement sustainable practices for military facilities inhabiting Western arid-lands. Now, the engineering branch of the National Science Foundation is supporting the lab’s efforts to construct mobile microbial nurseries for the effective transport and application of the grown microbial communities through the Center for Bio-mediated and Bio-inspired Geotechnics at ASU. These mobile nursery facilities are being built in California and will be delivered to ASU shortly.

The novel technology involves taking remaining beneficial microbes from the soil and growing them in the nurseries. Upon ensuring that only local and naturally occurring microbes remain as to avoid disrupting the crust’s biodiversity, the microbial communities are returned to the soil.

“The idea is this: If we destroy the natural crust, they will come back naturally, but that takes a very long time. There are two problems here. One is continued destruction, and then in order for the microbes to recolonize, you have to bring microbes in from somewhere else. That is where we can intervene,” Garcia-Pichel added.

These communities, once returned to the soil, enhance plant growth by promoting soil fertility and bind to soil particles, anchoring them to the crust to reduce the release of airborne particles. To optimize the crust’s fitness and resilience, the microbes are also made “tougher” so that they can cope with the harsh environment that awaits them in the field.

The first large scale trial of this technology will take place in New Mexico in spring 2019.

Garcia-Pichel believes this recognition is vital, especially in shedding light on his innovative strategies and in changing the public’s perception of what can be done.

“Having local recognition for innovation is important to us. It makes us feel that our work is relevant,” he said. “Humans are creatures of habit, so when you are innovative, you may have to knock at the door recurrently because people tend to know just what they know. This recognition can be very important in reaching our long-term goals by giving us exposure.”

The energy at the second annual Herberger Institute Day was electric — so electric that after four solid hours of almost 100 creative workshops at Herberger Institute’s five schools and art museum, and after 650 faculty, students and staff from the institute joined each other for dinner and guided conversation on Forest Mall, a circle of people was still dancing.And at the center of that circl...

The energy at the second annual Herberger Institute Day was electric — so electric that after four solid hours of almost 100 creative workshops at Herberger Institute’s five schools and art museum, and after 650 faculty, students and staff from the institute joined each other for dinner and guided conversation on Forest Mall, a circle of people was still dancing.

And at the center of that circle, for one brief impromptu moment, was Herberger Institute Dean Steven J. Tepper, popping in his signature bow tie. 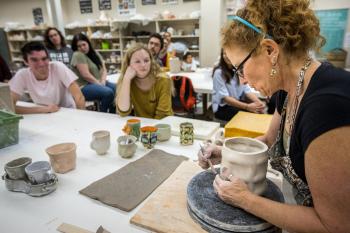 The break-dancing dean was not the only difference at this year’s Herberger Institute Day: The number of people signed up for workshops almost doubled from 2017, with 2,333 registrations. And this year there were two film screenings after the communal dinner, including “The Shape of Water,” presented by ASU Film Spark at the Marston Exploration Theatre, which also featured a live talk-back with the movie’s "amphibian" star, Doug Jones.

“We are a creative city at the institute — 6,000 artists, designers, scholars — working, teaching and learning together,” Tepper said when the day was done. “You could feel the energy of that bustling city on Herberger Institute Day.”

Sofia Alvarez, a theatre design and production student who helped lead a life-casting workshop, appreciated the opportunity to experience other parts of the college.

“A lot of times people just stay in their buildings and people work within their little ecosystem that’s going on there,” she said. “It’s nice to get out of that bubble and collaborate and speak with others and kind of bridge that gap.”

Melita Belgrave, associate professor of music therapy, signed up for three workshops: Escape the Museum, Crafting Your Stress Away and SplashMob, a (movement-based) painting — using the artists' feet — outside Dixie Gammage.

“It was just a lot of fun,” Belgrave said. “Every activity that I did, I did not interact with anybody from the School of Music. So I was interacting with students and staff and faculty from all other units in Herberger Institute.” 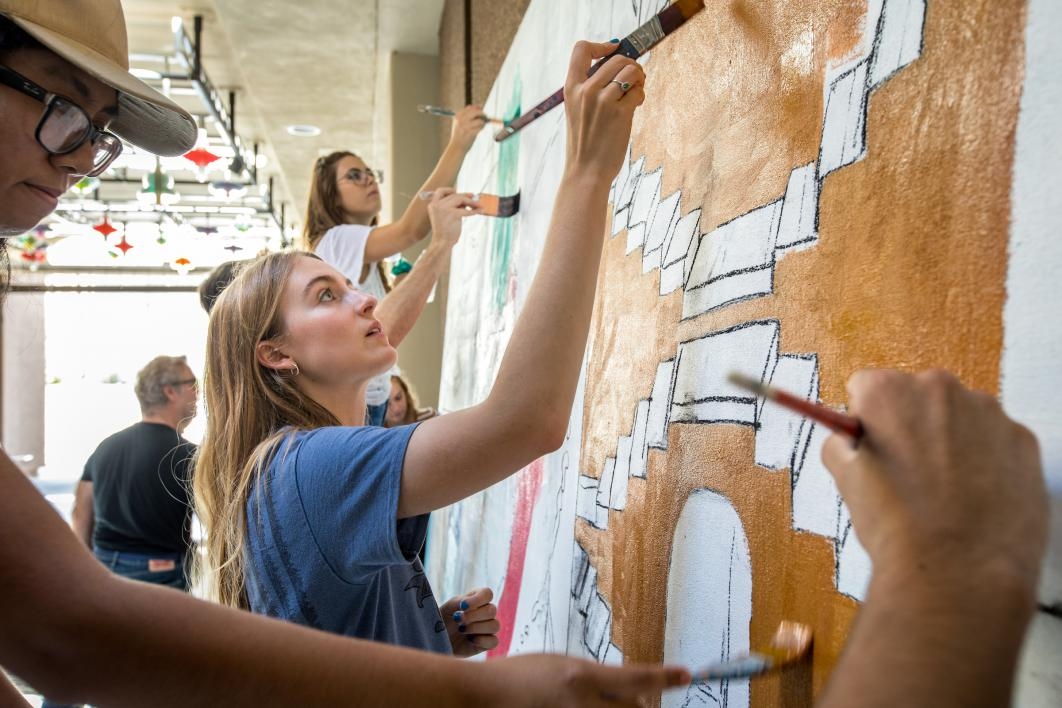 Digital culture freshman Kelsey Phillips joins others in painting the Speed Mural in the Stauffer Breezeway, part of the second annual Herberger Institute Day on the Tempe campus on Oct. 11. Theater junior Maria Harris and others learn to "Sing Like an Opera Singer" as part of the second annual Herberger Institute Day. The event featured classes and activities open to students, staff and faculty from all five Herberger Institute for Design and the Arts schools and the ASU Art Museum. Printmaking sophomore T'Keyah Nelson and others take their first lesson playing a violin as part of the second annual Herberger Institute Day. 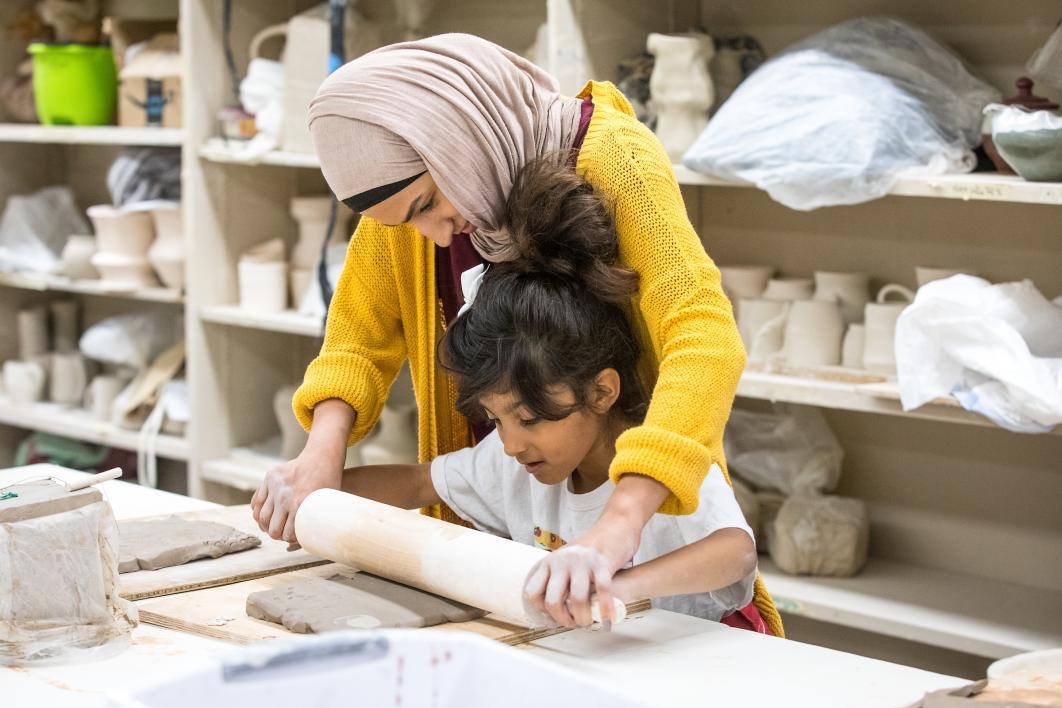 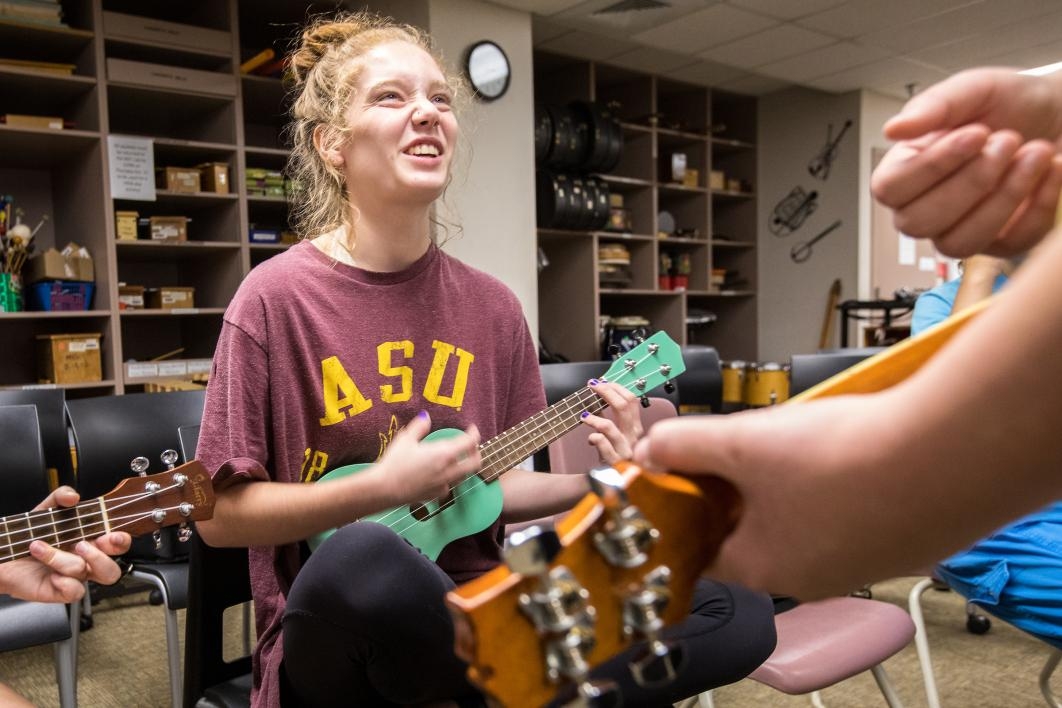 Filmmaking freshman McKenna Gattis jams with a couple of other ukulele musicians following their workshop. 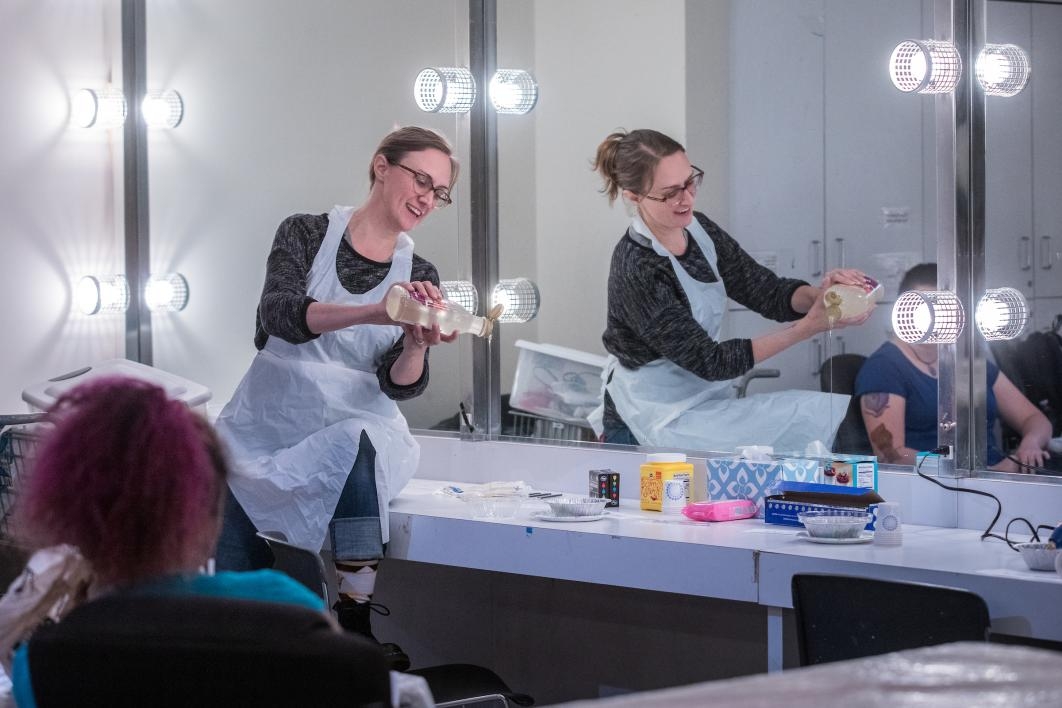 Tepper, who sampled more than eight workshops, including ukulele, painting with sand and storytelling through film, noted that at each stop, “students around the table came from every single college. We are doing on Herberger Institute Day what we aspire to do on every day — provide opportunities and pathways for our students and faculty to move seamlessly across the institute — to access talent and ideas in every discipline, finding inspiration in creative adjacencies.”

Reaston McManus, a photography undergraduate, found inspiration in a literal creative adjacency: “I’ve never been to Design North before, so I completely found a whole new building.”

McManus said his favorite part of the day was the dinner, dubbed #CreaTable, which he pronounced “delicious.” This year’s meal was the work of a group of undergraduate and graduate Herberger Institute students enrolled in an eight-week interdisciplinary class . Led by graduate student instructors Mallory Alekna and Young Nae Choi, with input from Institute Professors Liz Lerman and Michael Rohd and Herberger Institute Special Events Manager Nyomi Gruber, the students planned, organized and presented the food, activities and entertainment, which included a brass band, the Herberger String Quartet and a student DJ from the School of Music.

“The meal was incredible,” Tepper said. “Great music, great conversation. Six hundred and fifty of us, together. One student said to me, ‘If I were in another college, this wouldn’t be nearly as fun. But at Herberger Institute, every other creative discipline is fascinating to me, so I love this.’ I could not agree more. Herberger Institute Day is a beautiful and powerful expression of who we are.”