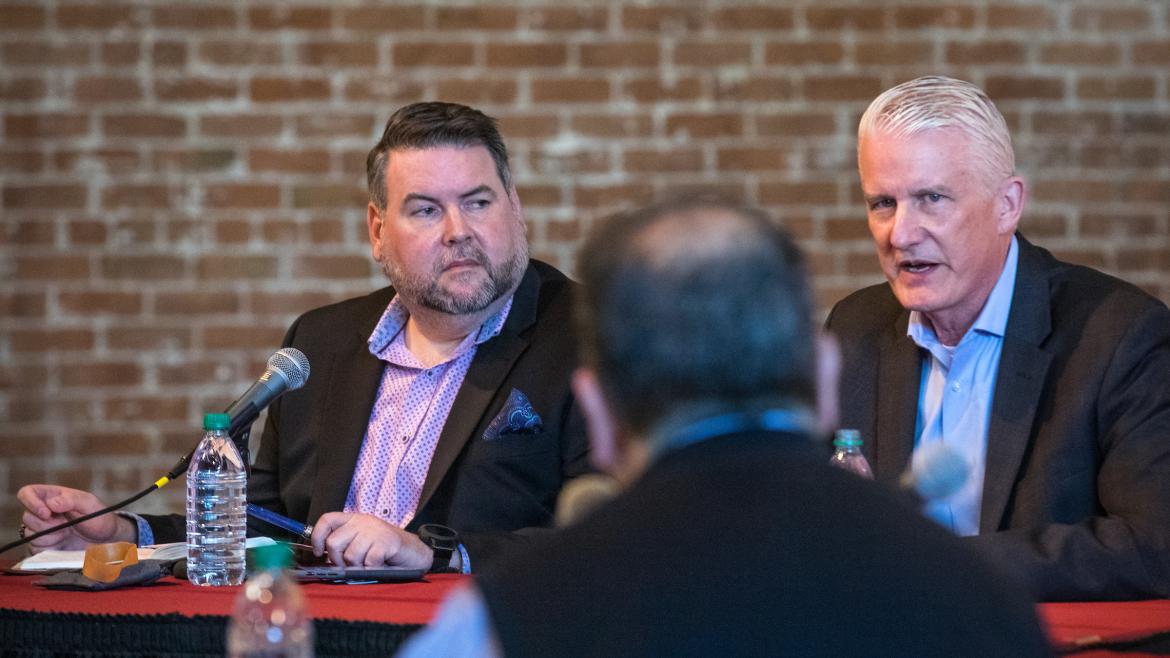 Marijuana on the long road to medicine

Last year almost 87,000 pounds of marijuana were sold to the nearly 153,000 Arizonans who carry medical cards legally allowing them to buy it (that equates to slightly more than half a pound each per year).

Clearly, it’s a viable solution for their ills. Unlike a pill, however, it’s tough to gauge the strength of a dose with any kind of precision. And serious doctors want to see the science before including marijuana in a treatment plan. For anxiety, no problem. For childhood epilepsy, it’s a minefield.

Both agreed that marijuana is effective in treating problems like anxiety and post-traumatic stress disorder. However, because pot can’t be readily studied (“almost impossible,” one panelist said), for now it’s a blunt hammer more than a scalpel.

Dr. Angus Wilfong, the division chief of pediatric neurology and associate director of Barrow Neurological Institute at Phoenix Children’s Hospital, said he has concerns with prescribing it because it hasn’t been studied.

“It takes science to know when something is safe and effective,” Wilfong said. “Before we can widely embrace a new therapy, no matter what it is … we need some science, and not just anecdotes.”

Wilfong said he’d never argue with a family of a child whose epileptic seizures are prevented by marijuana. It has been used for health care for 5,000 years, but in those 5,000 years, there has been almost no clinical science.

“That science is what it takes to find out something works,” Wilfong said.

Trials in devastating epilepsy cases led to the FDA approving CBDCannabidiol (CBD) is a naturally occurring cannabinoid constituent of cannabis. for children with the condition.

The problem with marijuana research is the drug is classified as a Schedule 1 drug by the DEA. That means, in the eyes of the government, marijuana is on a par with heroin; it has absolutely no redeeming qualities. Scientists literally rarely get their hands on it to study it, said co-panelist Jason Robert, the director of the Lincoln Center for Applied Ethics at ASU and a faculty member in the School of Life Sciences.

“What that amounts to is not quite a clampdown but certainly a restriction in the availability of marijuana for research purposes,” Robert said. “We’ve got a situation in this country where it’s effectively a Catch-22.”

Robert said we might be better off legalizing pot recreationally, as Canada did Wednesday, in conjunction with medical legalisation. “Hopefully we’ll see some changes in the regulatory structure that will allow us to do some research,” he said.

The ethical qualms come from the way medical marijuana is currently prescribed — with a wink and a nod. That’s not doing medicine or science any good, he said.

Wilfong said that although marijuana may help a child with chronic epilepsy, that child may also be on four other drugs in conjunction with brain surgery and an electronic pacemaker. Because marijuana has not been studied, it’s not understood at all how it will interact with those other treatments. And the active chemical in marijuana may not be measured precisely from dispensary to dispensary.

“Any little change in dosing for childhood epilepsy could be deadly,” Wilfong said.

“Anecdotes will not address that,” Robert agreed.

The debate was part of the ASU College of Health Solutions’ yearlong panel discussion series, “We Need to Talk: Tough Conversations About Health,” which examines hot-button health issues. The series is the brainchild of Dr. Joseph Sirven, a physician at Mayo Clinic and an adjunct professor of the college.

Top photo: Lincoln Center for Applied Ethics Director Jason Robert (left) and Dr. Angus Wilfong, the division chief of pediatric neurology and associate director of Barrow Neurological Institute at Phoenix Children’s Hospital, discuss the anecdotal research on the use of medical marijuana at the "We Need to Talk" series at the A.E. England Building in downtown Phoenix on Wednesday. Photo by Charlie Leight/ASU Now

Battle of the Sun Belt vs. Huntsville for Hockey

Battle of the Sun Belt vs. Huntsville for Hockey