These are literally (really, literally) just a few of the topics covered in the spring 2019 Department of English course offerings. Taught by award-winning faculty from myriad specialties, the courses cross disciplinary boundaries and are designed to reach students where they are. 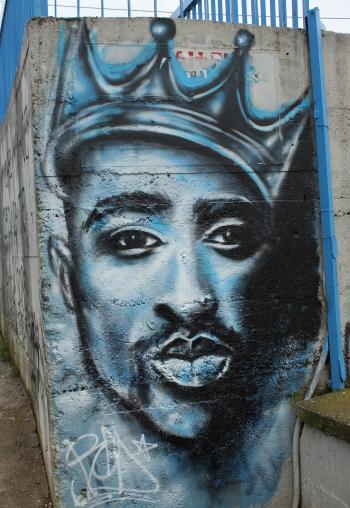 Tupac Shakur's legacy is truly worldwide; graffiti with his likeness appears in Serbia. ASU's Stacey Moran is teaching a film and media studies course on "The Legacy of Tupac Shakur in Film and Music" this spring. Photo courtesy Чигот on Wikimedia Commons under CC 4.0 Download Full Image

We’ll list a few of the standout choices here, but there are even more options in the ASU class schedule (search by ENG, FMS, APL, or LIN prefixes); the course list includes online offerings as well.

A famous poet said, “Every day, I’m standing outside trying to sing my way in”? But it wasn't Maya Angelou or Rilke or Rumi.

The sage was none other than musician Tupac Shakur, known by his stage name 2Pac, who, according to ASU’s Stacey Moran, “has been hailed not only as a rapper, but also as an actor, an activist, a thug, a poet, a rebel and a visionary.”

Moran wants to make sure that you know just how much of an impact 2Pac made on popular culture. Her spring 2019 film and media studies course The Legacy of Tupac Shakur in Film and Music will engage students in dialogue about the “deeply rooted values found in 2Pac's work as they connect to the broader historical, social and political issues in contemporary American life.”

“Media, especially music and film, can be powerful tools for social justice,” said Moran, a lecturer in the Herberger Institute for Design and the Arts’ School of Arts, Media and Engineering. “Because 2Pac's work speaks to a very broad audience and provides a rich framework for addressing a number of issues that Americans face, a course on 2Pac (seems) to be able to accomplish it all.” 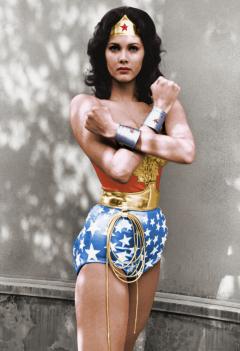 She’s definitely not a damsel in distress; she’s doing the rescuing. The role of the female hero has evolved over the years in literature and culture at large. Melissa Free’s spring 2019 Female Action Hero course will question: What were her roots? To what is she a response? What forms does she take? How has she evolved? And why, at last, has she begun to flourish? As a student, you’ll journey through a diverse catalog of characters, genres and narratives to understand the social, historical and cultural contexts of the female action hero.

Throughout the course you’ll study warriors, detectives and superheroes who have made the female action hero an icon in literature and on screen. Free brings her own interests and history to the course and its characters, drawing from formative literary encounters with leading females: “I realized that my early exposure to characters like Nancy Drew and the Bionic Woman, followed later by the likes of Ripley and Buffy, had been the shadow texts of my more formal feminist education.”

Free expresses her excitement about learning from her students as well. “I look forward to seeing what this new group will bring to the classroom, just as I look forward to introducing them to female action heroes they may not have previously encountered, from a variety of ethnic and national backgrounds, with a wide range of characteristics and motivations.” 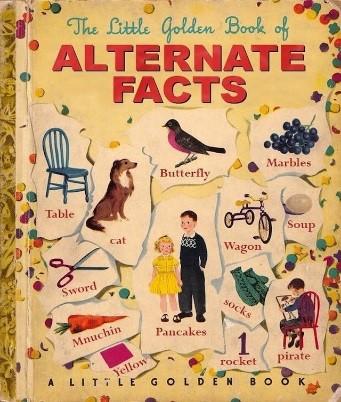 With satire, hoaxes, misinformation, counterfeit news stories and propaganda-disguised-as-real-news all over our social media timelines and feeds, how do we know what information we can trust?

Maureen Daly Goggin, a professor of English in writing, rhetorics and literacies, says it’s not always easy to discern fact from fiction, but one way to start is by viewing all "news" with a healthy dose of skepticism. “We can think of (information as) moving along a continuum from truth to an ambivalence to truth to mainly falsehoods to outright lies.”

Goggin’s spring 2019 course, Rhetorical Analysis: Fake News and Alternative Facts aims to combat the information challenges that we face today. You’ll study the use, meaning and etymology of the terms: post-truth, fake news, and bulls--t, while gaining skills on how to determine fact from fiction to save your credibility as a reader and writer.

Counterfeit news has existed since ancient times, but the rise in social media and internet use during today’s technological age has given momentum to false information. With no signs of fake news disappearing soon, it’s important to be able to analyze the messages and validity of sources and news in our studies and careers.

If you register: Rhetorical Analysis: Fake News and Alternative Facts (class #24931) will meet Mondays and Wednesdays from 3:05 to 4:20 p.m. on ASU’s Tempe campus. 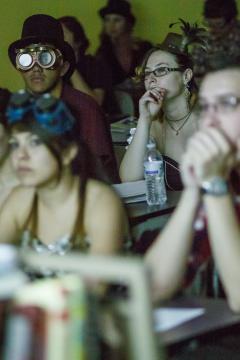 If you’re looking for an entry into the young adult literature publishing world, look no further than the spring 2019 Literature for Young Adults course.

The class is for students who want to participate in the YA literature world, whether as teachers, authors or publishing industry professionals. Students read books of their choosing, create websites about their favorite books and visit face-to-face with famous authors and publishing industry marketing heads. This can serve as a lead-in to an internship helping a local young adult author with book launches, website updates, publicity and beta reading.

Professor of English James Blasingame, an award-winning teacher and researcher in YA lit, is the instructor for the course. “As executive director of the Assembly on Literature for Adolescents of the National Council of Teachers of English, I spend most of my time working with authors, publishers, and marketers, but also with teachers and aspiring authors,” said Blasingame. “This course is the starting line! Famous, successful authors have come through this class, as well as one New York Times best-seller senior editor.

If you register: Literature for Young Adults (class #24925) will meet on Tuesdays and Thursdays, from noon to 1:15 p.m. (Note that this class is also offered online as an iCourse during Session A (class #21150). 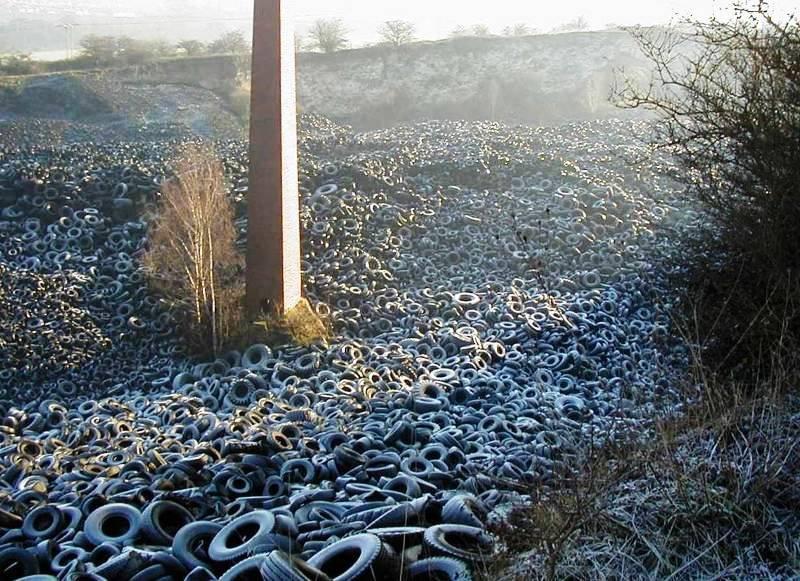 It’s not often that a knight visits ASU. But that’s the plan for the spring 2019 English course, Environmental Issues in Literature and Film where Sir Jonathan Bate, professor of English and provost of Worcester College, University of Oxford, U.K., will be a guest lecturer. (Bate was knighted in 2015 for “services to literary scholarship and higher education.”)

ASU Professor of English Mark Lussier, the main instructor for the course, points to work by ASU Global Institute of Sustainability director Gary Dirks as a catalyst for Bate’s visit and for the course focus. “(Dirks) quite often says that only the humanities can save the planet at this late-stage of the Anthropocene, the current geological era when human activity has been the dominant influence on climate and the environment.

“Sir Jonathan Bate, one of the leading environmental humanities scholars in the U.K., shares this view and is deeply engaged in conceiving and implementing humanities projects designed to pursue, even achieve, this elusive and lofty goal.”

The team-taught course combines a revaluation of landmark works that helped define ecological thought (for example, Henry David Thoreau’s “Walden” and Rachel Carson’s “Silent Spring”) with exploration of emerging forms and theoretical models. To Lussier, the topic is personal and comes none-too-soon: “Hopefully, this call to action will inspire members of the university community to grapple with the ‘wicked problems’ embedded within our current crises, moving from activism to action in the process.” 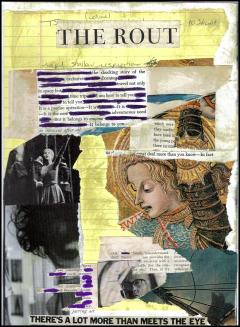 In this course, stealing will be encouraged. Students in poet Sally Ball's spring 2019 Genre Fusions will “explore the evolving territory often identified as hybrid: writing that is neither what we expect of nonfiction or of poetry — or even of ‘prose poems’ (a term that now seems almost quaint!) — a form that’s breaking new ground.”

Contemporary writers are layering text over images, incorporating news headlines and historical documents, playing with grammar and structure and “borrowing” from other well-known poems and stories. One thing you won’t find: anything in the “roses are red” formula. “Poetry looks so little like it looked when our presumptions about it hardened into the American consciousness,” said Ball, an associate professor of English. “It mostly hasn’t rhymed for over a century!”

As textbooks, the course will include work like Harmony Holiday’s “Hollywood Forever,” which employs photographs, jazz lyrics and advertisements; Maggie Nelson’s “Jane: A Murder,” a collage of poetry, prose, dream-accounts and documentary sources about an unsolved homicide; and Tyehimba Jess’s “Olio,” a blend of sonnet, song and narrative that documents the lives of African-American performers.

The effect of these mash-ups, said Ball, “is the opposite of the numbing accumulations of social media … instead, we are suddenly in a world boldly intensified, our capacity to feel alongside someone else awakened and renewed.” 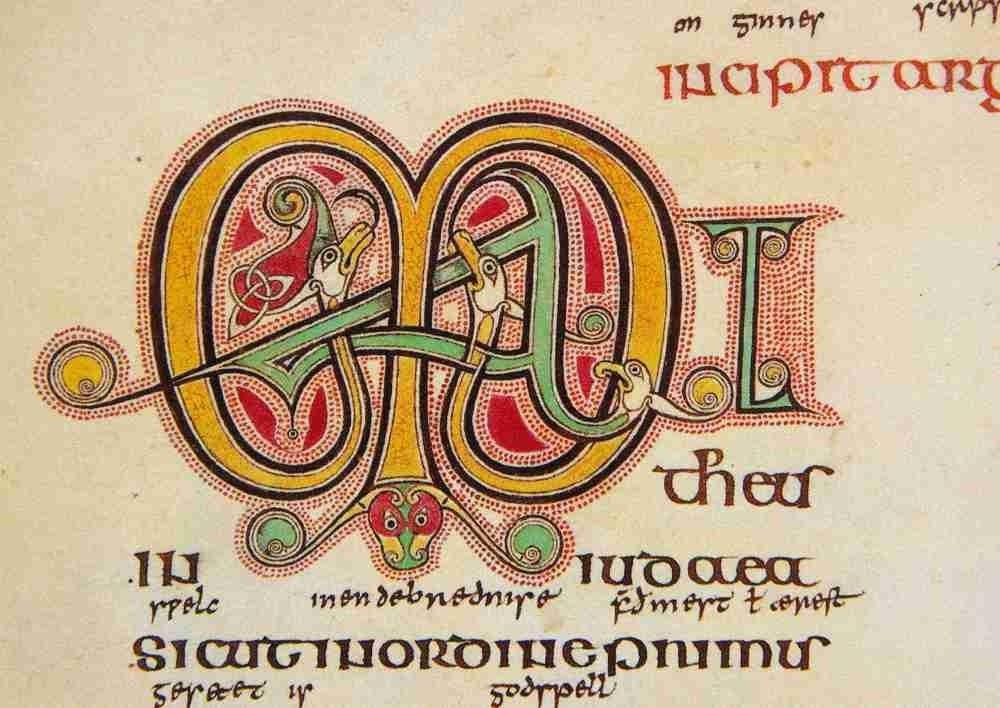 Did you know that several English words beginning with the letters “a-l” come originally from Arabic (sometimes by way of Spanish)? OK, sure, maybe you knew that about "algorithm" and "algebra" — but what about "alfalfa?"

While the Oxford English Dictionary doesn’t seem like titillating reading, with it you can make these kinds of mind-blowing discoveries. Students in Elly van Gelderen's spring History of the English Language course will use the OED in this manner frequently. But you won’t just consult dictionaries; van Gelderen believes that revisiting original manuscripts can help provide insight about language change and meaning. “We’ll cover texts from Alfred and Aelfric, from the Exeter Book, the Lindisfarne Glosses, the Peterborough Chronicle, Seinte Katerine and many others, using online manuscript images,” said van Gelderen, a Regents’ Professor of English in linguistics who literally wrote the book on this topic. “Looking at manuscripts provides a completely different window on the older English sentence.”

Don’t be intimidated by this graduate-level linguistics course. The material, as van Gelderen presents it, is quite accessible — especially for future educators and those enrolled in 4+1 programs. “The course explains the scripts, each word and its history and the syntax of every sentence,” van Gelderen said. “It is especially designed for graduate students who may want to teach the history of English at a college level.”

Offense Struggles in @SunDevilVB Loss at No. 20 UCLA

Making a difference in the world

Offense Struggles in @SunDevilVB Loss at No. 20 UCLA