Christine Kajikawa Wilkinson recently has received two honors recognizing her career that has been dedicated to education and leadership with an extensive history of community service.

The Tempe Community Council has named Wilkinson the recipient of its Don Carlos Humanitarian Award, presented at an awards ceremony Wednesday evening. The Don Carlos Humanitarian Award, which honors those who have dedicated their lives to giving back and caring for others, is named after Tempe’s founder, Charles Trumbull Hayden, who was known as Don Carlos. Her parents, Margaret and William Kajikawa, received the same award in 1986 for their commitment to Tempe. 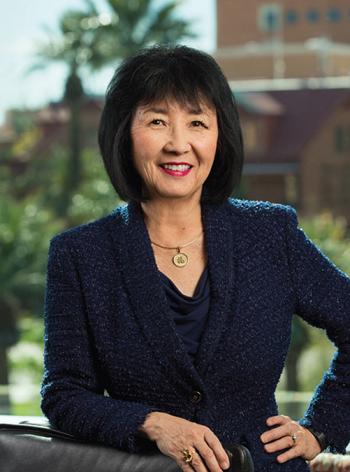 Christine Kajikawa Wilkinson’s current roles at ASU are senior vice president and secretary of the university; president and CEO of the ASU Alumni Association; managing director of the Trustees of ASU; and a tenured faculty member in the Mary Lou Fulton Teacher College. Download Full Image

AZ Business Magazine named Wilkinson to the 2018 list of the Most Influential Women in Arizona, which recognizes women who demonstrate professional excellence, innovation and community impact. AZ Business Magazine featured the list in its July/August edition of the publication and held an awards reception in Phoenix on Aug. 23.

Her community involvement includes serving on the following boards: Arizona Business Leadership Association, Valley of the Sun United Way, and Southwest Autism Research and Resource Center. She also serves on the Big Brothers Big Sisters of America National Leadership Council. Wilkinson is a member of the ASU Foundation’s Women and Philanthropy Program and the Arizona Women’s Forum.

For her leadership, contributions and commitment to service, Wilkinson has received the following honors and awards: Most Admired Leader Lifetime Achievement Award by the Phoenix Business Journal in 2017, induction into the Arizona Women’s Hall of Fame in 2017, the Golden Saguaro Award in 2016 by the Japanese American Citizens League, the Tempe Business Woman of the Year in 2014, One of Arizona’s 48 Most Intriguing Women in 2012 as part of the Arizona Centennial Legacy Project and the Woman of the Year in 2009 by Valley Leadership.

It is Here!!!! Pac-12 Announces All Times And Dates for @SunDevilHoops

The Pac-12 Conference has announced its 2018-19 men's basketball schedule, as the Sun Devils will open on Tuesday, Nov. 6, hosting 2018 Big West Tournament champion Cal State Fullerton on Pac-12 Network in a 6 p.m. contest. ...

Tempe campus , School of Civic and Economic Thought and Leadership , Sandra Day O'Connor College of Law , The College of Liberal Arts and Sciences

It is Here!!!! Pac-12 Announces All Times And Dates for @SunDevilHoops The Pac-12 Conference has announced its 2018-19 men's basketball schedule, as the Sun Devils will open on Tuesday, Nov. 6, hosting 2018 Big West Tournament champion Cal State Fullerton on Pac-12 Network in a 6 p.m. contest.