YoungJu Shin, assistant professor at the Hugh Downs School of Human Communication and affiliated faculty at the Center for Asian Research, was recently named as a 2018-19 U.S.-Korea NextGen Scholar.

The U.S.-Korea NextGen Scholars Program is a unique two-year program that provides opportunities for mid-career Korea specialists to discuss issues of importance to U.S.-Korea relations with policymakers, government officials and opinion leaders in Korea and the United States; learn how to effectively engage with the media; participate in the policymaking process; gain experience as public intellectuals helping to bridge the scholarly and policy communities; and address issues of importance to the U.S.-Korea relationship. 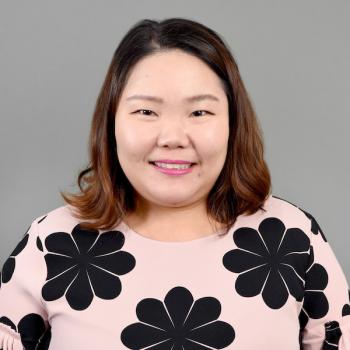 “As a communication scholar focusing on intercultural communication, I hope to help facilitate discussions on ways to engage in meaningful intercultural dialogue,” Shin said. “The NextGen Scholar program will provide me with the opportunity to collaborate with other scholars and key policymakers in Washington and Seoul in an effort to address important social issues in innovative ways.”

NextGen Scholars are selected by the Center for Strategic and International Studies Korea Chair and the University of Southern California’s Korean Studies Institute. Shin was one of only 11 scholars chosen.

Since 2016, Shin’s teaching has included several courses at ASU on intercultural communication. She has served as a panelist on several on-campus events, exploring topics that include procedures used in communication research. She is also a faculty member of the ASU Intercultural Communication Interest Group (ICGlobal).

Shin hopes to expand her current research on immigrant communities to include those in Korea.

“There are two particular groups I am interested in researching,” said Shin. “Refugees from the North, who are now referred to as ‘new settlers,’ and laborers from Southeast Asia who come to Korea and form interracial families. Korea currently lacks civil dialogue on these immigrant populations, and as a result, they often face discrimination.”

Following her participation in the NextGen program, Shin hopes to apply her learnings and experiences to the classroom.

“I am very excited to be a part of this program, especially now, not only because of what is transpiring between the U.S. and South Korea but also between the North and South. The study of intercultural communication reveals that dialogue is one of the keys to bridging differences and divisions to work collectively toward a shared future.”

Playing video games is seen by many as a sedentary, solitary activity, but an Arizona State University student-led organization is seeking to help change that sentiment by promoting esports — competitive video gaming — as an athletic activity that democratizes competition and access among its participants while offering its players a sense of camaraderie.“It is an even playing field, that’... Playing video games is seen by many as a sedentary, solitary activity, but an Arizona State University student-led organization is seeking to help change that sentiment by promoting esports — competitive video gaming — as an athletic activity that democratizes competition and access among its participants while offering its players a sense of camaraderie.

“It is an even playing field, that’s one thing that is very different than regular sports,” said Lucas Selman, president of the ASU Esports Association.

At the association's meetings every Friday, you’ll find a diverse group socializing and competing with and against each other at the highest level of competitive play in myriad games.

But it's not just the players; there are a lot of roles and careers available in esports.

"There's tournament organizers where you plan events, a bunch of social media you need to do, media production crews, coaches," said Luc McConnell, vice president of the ASU Esports Association. "You need a whole host of skills to be sucessful in esports as a business, you don't necessarily just need to be a player."

Members within the association have also found success in collegiate-level tournaments. They won the Tespa Heroes of the Dorm tournament in 2016, beating out UT Arlington in the grand finals and garnering a first-place prize pool of $375,000 in tuition.

The ASU Esports Association is now looking to recapture that former glory with its current members.

“We’re now focused on other games, like Blizzard Entertainment's 'Overwatch.' It’s really big here in Arizona and we have a lot of high ranked players who compete in 'Overwatch' at a really high level,” Selman said.

But even if you're not an elite-level player, the association is ready to welcome you, Selman added.

"It doesn't matter if you're into competitive gaming — you can still make friends here, have fun, and socialize while playing video games."

The ASU Esports Association currently meets every Friday at the Tempe campus from 5 p.m to midnight in EDC 117.