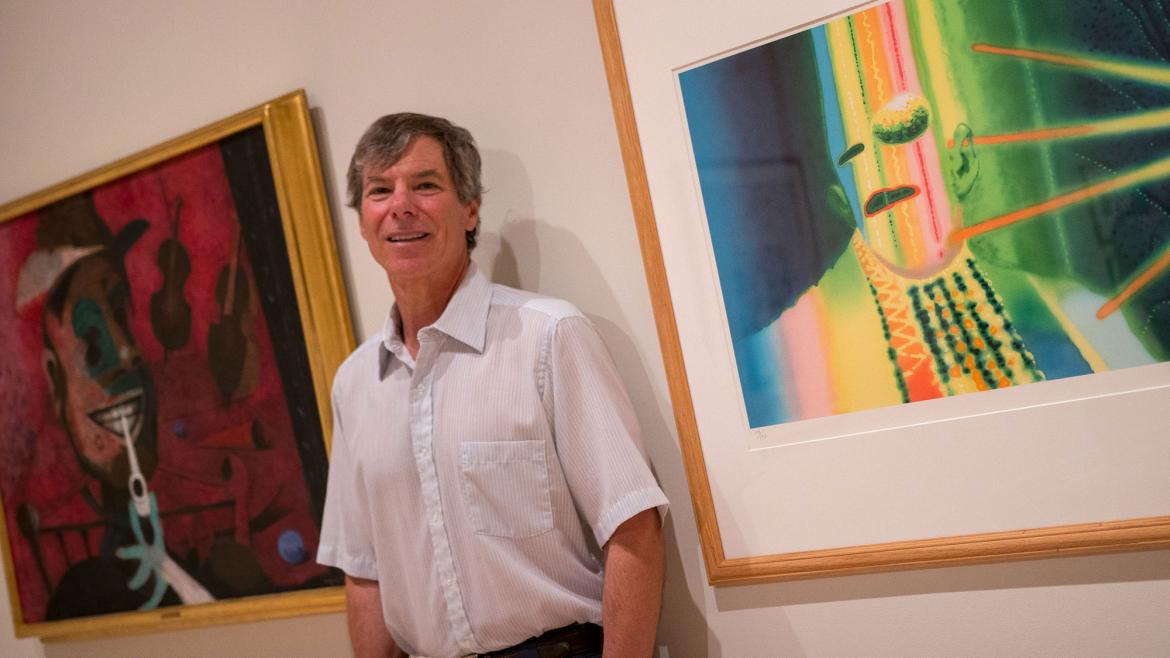 Artists and scientists are not such strangers as one might think. An overarching curiosity drives both.

Arizona State University engineer Nathan Newman sees in his fellow scientists — and in many of his students — “an unbridled passion that dominates their life, just like the desire to create imagery that I find among artists.”

Newman himself has traversed both realms, contributing his expertise in physics and materials science to the art world over the years. His latest foray is as guest curator of an ASU Art Museum exhibit designed to explore how a scientific eye can illuminate aspects behind the creation of various works in the museum’s collection and the visual effects that enhance their aesthetic appeal.

“I like being around artists because they have the same appetite to create art as I do to understand science and the world around us,” said Newman, the Lamonte H. Lawrence Professor in Solid State Science in the Ira A. Fulton Schools of Engineering.

Titled “Material Beauty,” the exhibit focuses on artworks that examine:

• The connections between chemistry and the ways the human brain discerns color. This involves wavelengths of light and energy absorption, along with the interplay of oscillating electrons and positive ions, among other things happening at the atomic level.

• Explanations of how neurological factors and certain brain functions play a role in our facial recognition ability — or the lack of it — and how these things shape the work of artist Chuck Close, whose work is in the museum’s collection.

• The “mathematics of geometric perspective” and how it allows two-dimensional paintings and drawings to depict three-dimensional images, enabling them to replicate the way the human eye visualizes the natural world within its sight horizon. 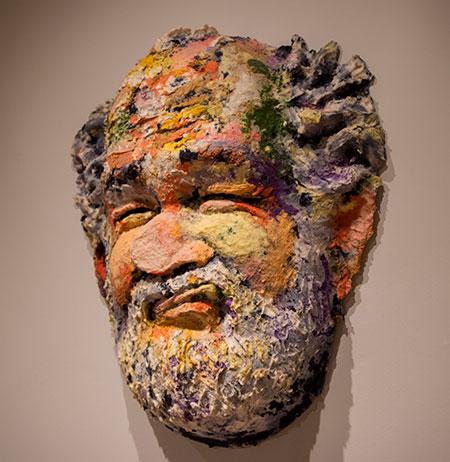 Works in the exhibit provide examples of the ways in which artists’ images reflect how human neurological factors and geometric perspective can shape our visual experience of objects. Photo by Marco-Alexis Chaira/ASU

“The show is part of our ‘Encounter’ series, for which we invite outsiders to put their own spin on our collection,” said Brittany Corrales, curatorial coordinator at ASU Art Museum and co-organizer of the exhibition.

“We invited Nate to be a curator because he has a curiosity about artists and art materials and offers the unique perspective of an expert on physics and materials science.

“The collaboration is a great way to welcome new audiences from science-based disciplines into the museum space to engage with art.”

It’s not Newman’s first time offering a scientific expertise to the art world.

A few years ago, he performed scientific analysis to aid an investigation that determined a painting owned by the ASU Art Museum titled “The Pioneer and Indian,” purported to be an original by American artist Frederic Remington, was in fact a forgery.

The detective work for the Danish artist collective SUPERFLEX included producing infrared images to reveal graphite underdrawings on the “The Pioneer and Indian” painting’s canvas and teaming with Dana Tepper, the museum’s chief conservator, to analyze the materials used in the painting at the atomic and microscopic levels.

Employing petrographic electron microscopy and microphotography, they produced ultrahigh-magnification images to observe the atoms in the iron that made up the meteorites, capturing images of their brilliant silicate inclusions — which are solids, gases or liquids enclosed within the mass of a mineral. 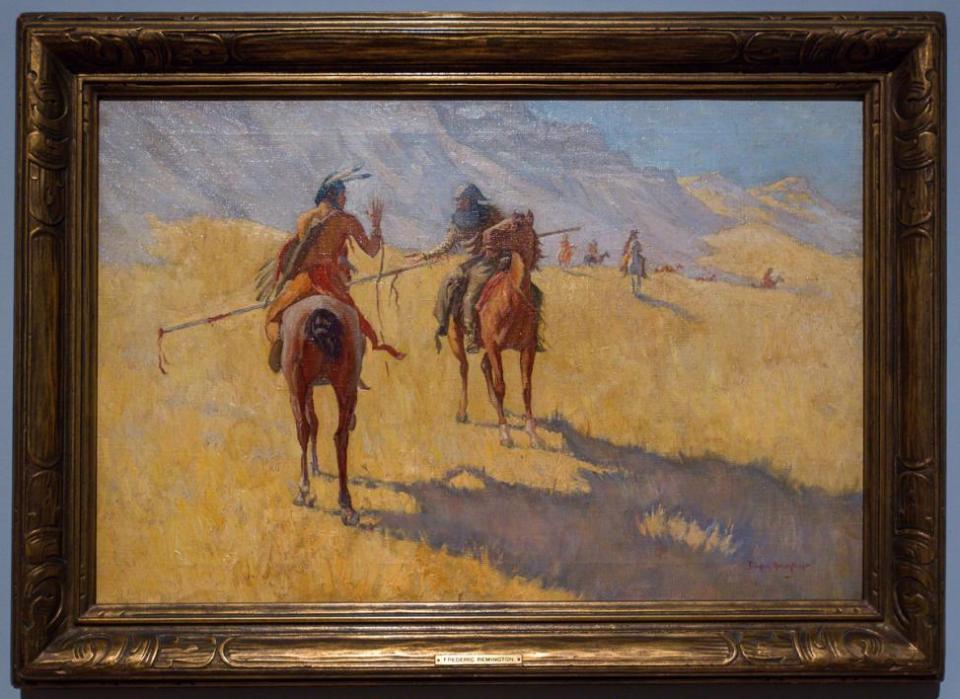 Newman's scientific analysis helped reveal that "Pioneer and the Indian" was in fact not an original by American artist Frederic Remington. Photo by Charlie Leight/ASU Now

The images that came out of this research have since become part of exhibits in a number of shows at reputable museums and galleries.

“I’m pleased that I played a small contributing role in that,” Newman said.

All in the family

Newman’s entry in the arts community comes by way of his wife, Penny, who is a figurative oil painter. She is the reason, he said, “I spend almost all of my vacations in art museums.”

He met the director and staff members of the ASU Art Museum through his wife’s fundraising efforts there. That led to the investigation of the forged painting and the research on the meteorites, and eventually to the invitation to be a guest curator.

Newman decided to take on the curator role because he thought it would be fun.

“I also thought that my wife would either get involved or at least be impressed,” Newman said. “She did not get involved, nor can I tell whether she is impressed.”

He adds: “I do know that she is befuddled that I have been involved in the creation of some very well received exhibits without any formal training in art. I must be a natural at this or a very good fake.”

What: Artworks chosen by ASU engineer Nathan Newman that engage with the chemistry of color, the neurology of facial recognition and the mathematics of perspective.

Hurricane Harvey, still stalled in the Gulf Coast region, has poured more than 20 inches of rain over the Houston area since Aug. 25.ASU Now spoke with Morteza Abbaszadegan, an Arizona State University professor of environmental microbiology and engineering, about the composition and safety of floodwaters and what to do after the floodwater recedes. Abbaszadegan is the founding director of the Na... 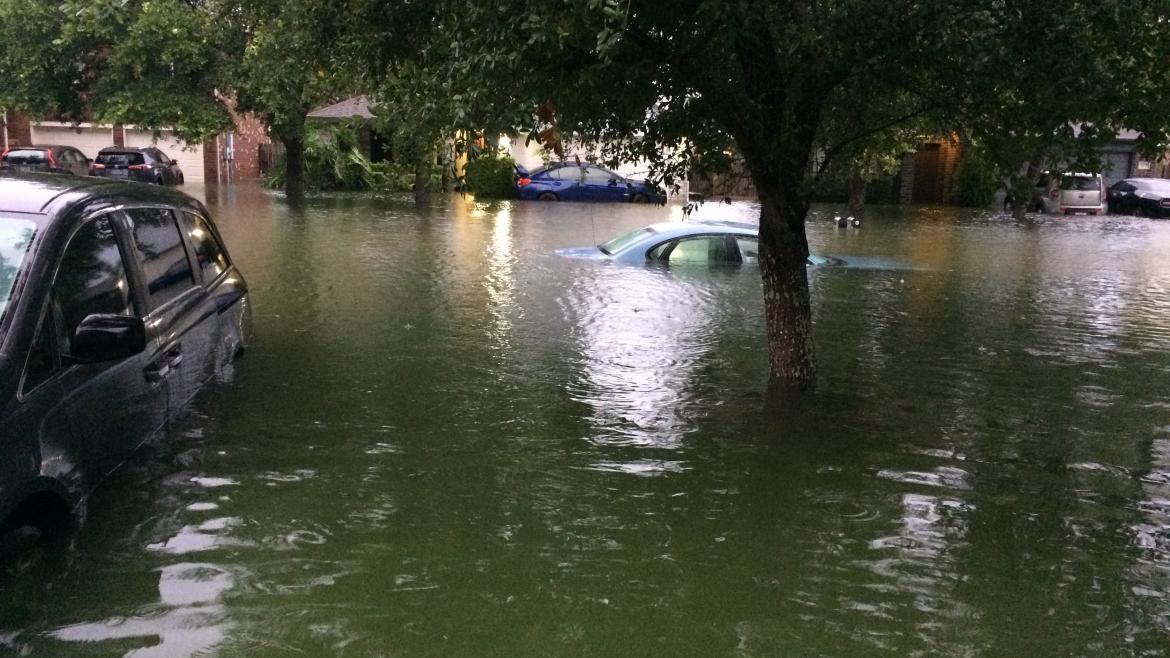 Hurricane Harvey, still stalled in the Gulf Coast region, has poured more than 20 inches of rain over the Houston area since Aug. 25.

ASU Now spoke with Morteza Abbaszadegan, an Arizona State University professor of environmental microbiology and engineering, about the composition and safety of floodwaters and what to do after the floodwater recedes. Abbaszadegan is the founding director of the National Science Foundation Water and Environmental Technology Center at ASU. His research expertise is in health-related water microbiology, pathogen removal, water quality in distribution systems, and techniques to detect viruses, bacteria and parasites in water environments.

Question: What should Houston-area residents be aware of before entering floodwater?

Answer: One of the biggest issues after a flood of this magnitude is microbial pathogens. Some residents will have no choice but to wade into floodwater. And, if that’s the case, they should focus on safety and hygiene. Don’t drink the water, don’t touch your mouth after your hands have been in the water, don’t cook with the water. Boiling water before you drink it will help. Drying supplies that have been soaked also will help.

Also, if you need to get in the water, use visual cues to determine how contaminated the water near you may be. You might see dead mice or rats, or you may see fecal matter floating in the water. Try not to touch any of those materials.

Q: What microorganisms are in floodwater, and how do they get there?

A: We know wastewater has a very high number of disease-causing microorganisms, such as salmonella, rotavirus and cryptosporidium. There also is pathogenic E. coli. You also will find various chemicals and contaminants. Some people don’t realize the extent of what is mixed into floodwaters, and many may think they are just seeing rainwater. That is not the case.

When a flood overwhelms wastewater treatment plants, there will be overflow to different parts of the city and community. In normal situations, we don’t get exposure to wastewater because it is delivered to sewage lines and then to treatment plants. It is treated and then discharged. In floods of this magnitude, you will find raw sewage overflowing and exposing people to a number of pathogens.

Q: What happens when the water recedes?

A: The biggest issue will be mold and fungi, which grow about four to seven days after the water recedes. Many types of cellulose materials, including plywood, provide enough nutrients for fungi and mold to grow at fast rates. And, Houston, with its high level of humidity and warmth, provides an environment that helps microorganisms such as penicillin and other toxin-producing molds grow at a faster rate.

Q: Are certain populations more vulnerable than others?

A: Yes, anyone very young, very old or sick. Many people saw the photo of residents in a nursing home sitting in waist-deep waters. Nursing-home residents often have weakened immune systems due to age or illness. If the residents in the photo were to pick up these microbes, they are more susceptible to illness.

Q: How can floods of this magnitude affect a region’s water sources?

A: There are source waters, such as rivers, where cities may take water, treat it and then distribute it. Due to the floods, the source water quality can change significantly. If that’s the case, the source water may get a higher load of microorganisms because of an influx of untreated wastewater and runoffs from the soil that will be washed into rivers. Then, residents would have an issue with drinking water and some people may get sick.

Public officials will monitor this. But if residents are concerned, they can boil their water before they drink it and use bottled water if it is available. Residents also can pay more attention to personal hygiene, and make sure to wash their hands often.