Arizona State University is helping to educate the next generation of hospice, palliative and dementia care professionals through a unique internship experience at Hospice of the Valley. As Arizona's largest hospice — and the second largest in the United States — Hospice of the Valley serves more than 10,000 patients each year. This partnership with Hospice of the Valley creates opportunities for students to serve their community through volunteer work. Students also have the option to take courses on dementia and Alzheimer's disease.

Gillian Hamilton is the administrative medical director for Hospice of the Valley (HOV) in Phoenix and serves as a new faculty member within the College of Health Solutions. 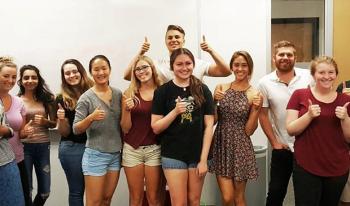 ASU students at Hospice of the Valley Download Full Image

"Through this internship, students will gain a thorough understanding of hospice care, and of the role and challenges for physicians and other professionals in this field. If they choose to enter the health care professions, this experience will be invaluable for their understanding of life as it nears its end. The mission statement of HOV is to bring comfort and dignity as life nears its end, and we hope students will have many opportunities to see this happen," Hamilton said.

Israel Zaldivar, a medical microbiology major, spent time with patients at the Gardiner Home and Friendship Village. Both are inpatient units within Hospice of the Valley.

"At Gardiner Home, I was involved with caretaking and helping the team provide for patients," Zaldivar said. "My time at Friendship Village gave me the chance to learn from a professional by observing their practice and their interactions with patients. I also evaluated pre- and post-characteristics of Alzheimer's patients. There is a growing presence of Alzheimer’s, so the course was important for providing an introduction to issues that may arise later in medical practice."

The more rigorous academic activities of the internship educate students about the clinical issues facing palliative care and fosters thinking for solutions to address these issues in their future careers.

“Finances are one issue. We are very fortunate in the U.S. to have the Medicare hospice benefit, however, the internship also addresses those without insurance — HOV cares for patients regardless of ability to pay,” Hamilton said.

Students will also learn how Hospice of the Valley handles patients who choose to stop life-sustaining and expensive measures (e.g. chemotherapy), the challenges in having no approved medications for behavioral issues, and the many ethical concerns that arise in palliative care such as honoring patient autonomy in decisions for end of life care. Students review charts and partake in research projects for ethics and issues facing international palliative care.

Kegan DeBacker, a recent ASU graduate, completed his internship this past spring.

"This internship allowed me to see the health care system in action — particularly how the hospice is compensated for their services and how funding is supplied to the unit," Debacker said.

Students also provide an additional support system for patients and families and develop close relationships with their patients. They visit, walk with patients and participate in special projects such as writing poetry or creating life story books.

"While the internship is an incredible experience, people who are not accustomed to seeing any end of life care may need some time to get used to it. The surprising things I have seen would be patients who are admitted to hospice care relatively young or who have struggled with drug addiction or debilitating lifelong illness," Debacker said.

Debacker pursued the internship to learn about the care process for dementia patients and how to support their families. His wish is to enter medical school to specialize in neurology.

"I will reflect on this internship when I apply to medical school," he said. "Spending time with someone with dementia gives you an opportunity to learn an incredible amount of information. In a majority of cases, someone with a major illness will teach you things that not even a specialist can teach you. The experience is a somber reminder how fleeting life can be, and how important it is to spend it how you want, while you can."

The internship course is open to upperclassmen in any major across ASU. Students will need to submit an application for interest. To learn more about the application process, visit the Pre-Health Internship Program site or email phip@asu.edu for more information.

Death as a punishment is an ancient concept. It is also controversial. Worldwide, over 140 countries have outlawed the death penalty, yet in over 50 it remains the law of the land.Most research on death penalty attitudes searches for explanations in cultural influences or individual political or religious beliefs. An interdisciplinary research team of social psychologists, evolutionary psychologis...

The College of Liberal Arts and Sciences , University

Death as a punishment is an ancient concept. It is also controversial. Worldwide, over 140 countries have outlawed the death penalty, yet in over 50 it remains the law of the land.

Most research on death penalty attitudes searches for explanations in cultural influences or individual political or religious beliefs. An interdisciplinary research team of social psychologists, evolutionary psychologists and legal scholars from the Arizona State University Department of Psychology have identified a different influence on how people think about punishment: the availability of resources. In a study currently in press at Evolution and Human Behavior, the team tested how resource scarcity or abundance was related to endorsement of the death penalty across the globe and among individuals. The paper was made available online last week. 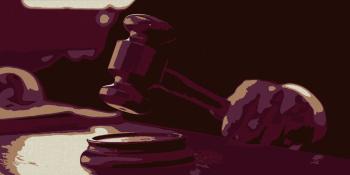 The availability of resources can have an affect on attitudes about the death penalty, a news study reveals. Illustration by Robert Ewing Download Full Image

The relationship between capital and punishment

Instead of focusing on how political views or religion affect the perception of the death penalty, the ASU researchers tested whether available resources influenced punishment for serious offenses. This idea — that resource scarcity could determine punishment — comes from approaches to understanding how humans evolved to deal effectively with different environments.

“To understand why people feel the way they do about the death penalty, we looked beyond individual differences to features of the environment that might affect people’s punishment attitudes, sometimes in ways outside of their conscious awareness,” said Keelah Williams, who earned her doctorate in psychology and law degree from ASU in 2017 and is now an assistant professor of psychology at Hamilton College in New York. Williams is the lead author on the study.

In four studies, using both archival and experimental methods, the researchers examined how the availability of resources might shape death penalty beliefs.

The first study assessed the relationship between resource scarcity and the presence of capital punishment in nations around the world. The researchers discovered that countries with greater resource scarcity were more likely to have a death penalty.

“Some might attribute the differences in countries' death penalty laws to numerous factors including cultural differences,” said Ashley Votruba, who also earned her doctorate in psychology and law degree from ASU in 2017 and is now an assistant professor of psychology at the University of Nebraska-Lincoln. To limit cultural differences at the country level as a possible explanatory factor, the researchers next focused on the United States, where the status of the death penalty is determined independently by each state and is currently legal in 31 states. Replicating the findings from the global study, U.S. states with lower per capita income were more likely to have the death penalty as a punishment option.

A causal link between environmental influences and the death penalty

Based on the results from the first two studies — that countries and individual states with fewer resources are more likely to have the death penalty — the researchers decided to test for a causal link between resource scarcity and endorsement of the death penalty.

In two additional experiments, the researchers had participants view pictures and read a short story about the economy. The story and pictures either detailed economic hardships like high unemployment and frequent home foreclosures or economic prosperity like high job growth and wages, rising stock prices and many new home purchases. After viewing the photographs and reading the story, the participants answered questions about their attitudes toward the death penalty, along with their political views and socioeconomic status.

Because the finding was statistically small, in the next experiment the researchers applied a “death qualification” criterion, also known as the Witherspoon rule, to the participants. The participants were questioned in the same way jurors serving on capital cases are screened. If jurors are staunchly opposed to, or staunchly in favor of, the death penalty, they are disqualified from serving on a capital case because jurors have to be willing to make the decision about the death penalty based on the evidence presented. The researchers reasoned that participants already committed to their death penalty beliefs would be less likely to be influenced by fleeting changes in their perceptions of resource availability.

Overall, the study findings suggest that the way a group deals with members who threaten the safety of others is influenced by whether people feel they are facing a world that is economically secure or not, said Michael Saks, Regents’ Professor of law and psychology at ASU. Saks, who is senior author on the study, added that the findings also suggest how society assigns punishment is fundamentally driven by the need for material well-being, and philosophical principles are developed afterwards.

“One would think that fluctuating perceptions of resource availability wouldn’t shape beliefs about something as morally profound and consequential as the death penalty,” offered Steven Neuberg, Foundation Professor and chair of the Department of Psychology. “These findings, along with others, help support the view that aspects of contemporary psychology rest on a deep, evolved rationality. They also have more immediate, practical implications: The ability of scientific psychology to better understand the peripheral factors that shape beliefs about the death penalty may be, for some, the difference between life and death.”

The study was completed at ASU while Williams and Votruba earned their doctorates in psychology and degrees in law.