Most neurons in the human brain live out their lives, enduring the processes of aging before eventually dying. Some, however, choose a more violent route: suicide.

In a new project, researchers hope to better understand a form of programmed cell death known as necroptosis, believed to play a crucial role in the massive destruction of neurons typical of Alzheimer’s disease.

Necroptosis, a form of programmed cell death, relies on 3 critical proteins. RIPK1 and RIPK3 bind to form a structure known as the necrosome. Then, the protein MLKL is activated, resulting in perforation of the cell membrane and cell death. The process is believed to play a major role in the neuronal loss characteristic of Alzheimer's disease. Graphic by Shireen Dooling Download Full Image

The new $3.2 million, five-year grant from the National Institutes of Health, titled "Necroptosis as a novel mechanism underlying neurodegeneration in Alzheimer’s disease," will investigate an important contributor to neuronal loss. The investigations could pave the way for effective therapeutics capable of blocking the necroptosis pathway and slowing or arresting some of the cell death characteristic of the disease.

According to Salvatore Oddo, principle investigator of the new project: “We anticipate that our findings will spur a new area of research in the ADAlzheimer’s disease field focused on developing new therapeutic strategies aimed at blocking its activation.”

Oddo is a researcher in the ASU-Banner Neurodegenerative Disease Research Center and an associate professor at ASU’s School of Life Sciences.

Alzheimer’s disease is one of the most darkly inscrutable human disorders and remains the only leading killer that cannot be prevented, treated or cured. Yet one thing has been clear from the first diagnosis of the memory-stealing ailment, over 100 years ago: Alzheimer’s disease is a prolific destroyer of brain cells. A postmortem brain that has been ravaged by the disease will appear markedly reduced in volume, due to the brain’s relentless insurgence against its own neurons.

Until now, however, researchers have remained puzzled as to just how the disease attacks and destroys cells in the brain — a foundational issue in Alzheimer’s research.  The new project will explore this mystery, investigating a unique pathway of destruction, necroptosis.

Historically, cell death has often been described in two primary forms, apoptosis, (a programmed cell suicide common in early development and other normal physiological processes), and necrosis, an uncontrolled cell death usually resulting from illness or injury. New research has underlined the importance of necroptosis, a programmed form of necrosis.

The human brain is known to undergo dramatic transformations over the course of a life, more than any other organ in the body. Programmed cell death, while devastating in the case of neurodegenerative diseases like Alzheimer’s disease, plays an essential role in many biological processes, particularly during normal embryonic brain development.

In the first few years of a newborn child’s life, the brain creates roughly 1 million new connections per second. This extravagant overproduction of neurons is followed by a phase of radical pruning to complete the early brain’s formation. Programmed cell death of this kind, known as apoptosis, is critical for many other aspects of embryonic and early fetal development. 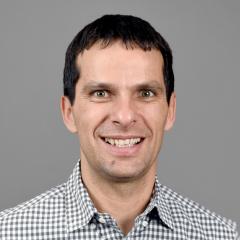 Salvatore Oddo is a researcher in the ASU-Banner Neurodegenerative Disease Research Center (NDRC) and a professor in ASU's School of Life Sciences.

The process of programmed cell death, however, can take a tragic and malevolent turn should it occur in the adult brain, leading to the telltale signs of neurodegeneration: severe memory loss, disorientation, declining motor abilities and speech functions and, eventually, death.

As Alzheimer’s disease continues its sinister trajectory, the urgency for effective treatments and strategies of prevention intensifies. Without a significant breakthrough, the disease is on track to afflict 20 million people in the U.S. alone by 2050. In addition to shattering so many lives, the epidemic could deal an economic knockout blow to the health care system, with estimated costs topping $1 trillion.

While the processes of aging are inevitable, their rate is not uniform among individuals. Further, researchers are unsure why some brain regions are more susceptible to degeneration or why some cells within a given region appear resistant to degradation and cell death.

Necroptosis activation is known to play an important role in multiple sclerosis and amyotrophic lateral sclerosis or ALS. Oddo and his colleagues have identified the first evidence of the activation of necroptosis in the case of Alzheimer’s disease and linked the advance of necroptosis to the increasing severity of cognitive decline and neuronal loss, which are hallmarks of the disease.

The effects of necroptosis are clear from the examination of affected neurons. The process appears to attack neuronal membranes, which become perforated, causing cells to lose function, eventually bursting from inside. In earlier research, Oddo has explored the molecular mechanisms giving rise to necroptosis.

The process begins when a key protein, RIPK1 binds with a second protein, RIPK3, forming a complex known as the necrosome and completing the first ominous phase of necroptosis.

Next, the necrosome activates a third protein, MLKL. It is this final protein that will complete the necroptosis pathway, delivering the coup de grace to affected neurons. MLKL appears to deliver the lethal blow in part through an attack on the cell’s energy storehouse, the mitochondrion.

Oddo’s group measured levels of RIPK1 and 3 and MLKL in postmortem brains stricken with Alzheimer’s disease. Within the temporal gyrus, a known hot spot for cell loss in Alzheimer’s, they found that during necroptosis, these diagnostic markers were increased. Necroptosis activation was also shown to correlate with the abundance of Tau, one of two key proteins (along with amyloid beta) forming the characteristic plaques and tangles long associated with the disease.

Further, necroptotic protein levels in autopsied brains were shown to negatively correlate with the earlier scores achieved by Alzheimer’s patients on the Mini-Mental State Examination (MMSE), a widely used evaluation of cognitive health.

Having established compelling links between necroptosis, cell loss and cognitive decline in Alzheimer’s disease, the researchers designed a therapeutic proof of concept treatment, which was successfully demonstrated in a mouse model of the disease. A pharmacological blocking of the key necroptosis binding event of RIPK1 with RIPK3 prevented the formation of the necrosome, leading to reductions in cell loss and improved performance by the mice on spatial memory-related tasks.

The NIH project will further the exploration of the necroptosis pathway and investigate other potential proteins implicated in programmed cell death, which could provide additional targets for therapeutic intervention and new hope for preserving neurons.

The research is supported by NIH grant R01AG057596

How much injected wastewater does it take to make an earthquake? ASU scientist is receiving a grant to find out.

One of the fastest-growing techniques for producing oil and gas today involves widening cracks in hydrocarbon-bearing rock formations underground. The cracks are opened by forcing a mixture of water, sand and chemicals into them in a process commonly called fracking.

The resulting fluid is processed to remove the oil and gas it has freed from the rock, and a wastewater residue called brine is left. The brine, which is toxic, is then disposed of by injecting it into deep layers of the Earth capped with rocks that keep it from reaching the surface. 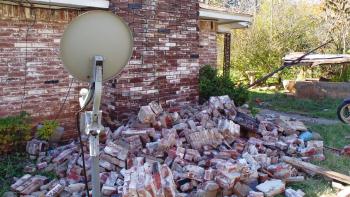 A house in central Oklahoma was damaged by the magnitude 5.6 earthquake on Nov. 6, 2011, which research suggests was caused by wastewater injected into deep disposal wells. ASU scientist Manoochehr Shirzaei has received a Department of Energy grant to develop a method for predicting the size and time of earthquakes from wastewater injection. Photo by Brian Sherrod/US Geological Survey Download Full Image

But the injection process, which is carried out far away from the fracking sites, can induce earthquakes. These may be large enough to damage buildings and other structures at the surface where the brine injection is done.

To gain an understanding of how brine injection causes earthquakes, Arizona State University scientist Manoochehr Shirzaei has received a $1 million grant (over three years) from the U.S. Department of Energy to model the injection process and its subsequent effects.

"Our goal is to find a physics-driven mathematical relationship between the amount of brine injected, its depth, and any effects at the surface," said Shirzaei, an assistant professor in ASU's School of Earth and Space Exploration.

"These effects can include earthquakes and also deformation — uplift — of the ground surface," he said.

Initially the study will focus on Oklahoma, a state that has been a center for brine injection activities and which has logged a detailed record of seismic events. These include a magnitude 5.8 earthquake in September 2016.

"We will also consider expanding the research to include brine injection sites in Texas, California, Ohio, Kansas, and Colorado," Shirzaei said.

Seismic records are readily accessible for the study from the U.S. Geological Survey, and quantities of injected brines are, by law, made publically available by the companies involved. 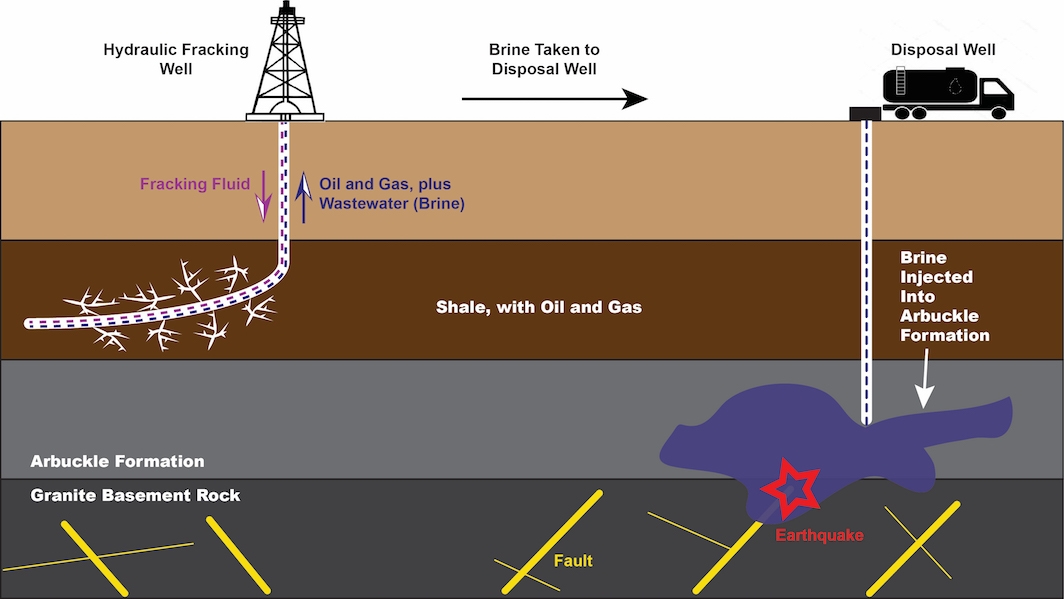 Contrary to widespread public ideas, the fracking process to extract oil and gas causes little or no seismic activity. Instead, earthquakes and seismic damage to structures come from injecting large amounts of wastewater ("brine") into deep rock formations where geological faults can be activated by the injected brine. 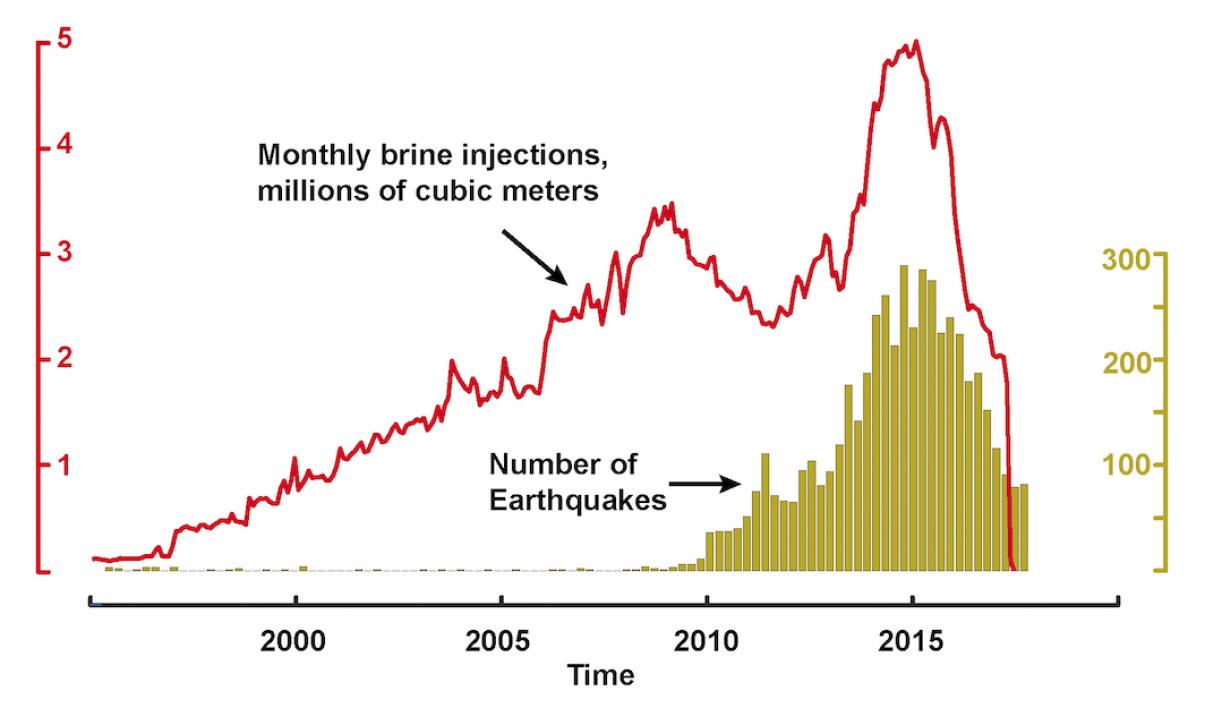 Seismic activity (right scale) occurs a decade or more after wastewater has been injected (left scale) because it takes a long time for the injected wastewater to activate deeply buried faults in the bedrock. The number of quakes corresponds roughly to the volume of injected wastewater, but the relationship is not exact. ASU research is seeking to make it more predictable.

A third element in the modeling is to include any deformation of the ground level. This is usually hard to measure because the effects are small and spread over a wide area. However, the use of interferometric synthetic-aperture radar (InSAR) data from orbit allows precise measurement of millimeter-scale uplifts over areas that are miles across.

Shirzaei explains, "We are looking to correlate injected wastewater quantities, measured deformation, and previous seismic activity to develop a model that can predict the likely effects of brine injection activity in a given area."

Because extraction of oil and gas is so important to a modern economy, Shirzaei expects the study will benefit a variety of stakeholders.

"The general public is the most important because they may be exposed to potential injury and damage," he said. The list also includes oil and gas producers, brine injection companies and geothermal energy providers.