Students stave off debt, build skills with part-time jobs through Education at Work

Since its launch in May 2016, the Education at Work partnership with Arizona State University has contributed to the success of more than 1,000 ASU students by helping them graduate with little to no debt while equipping them with the skills they need to secure great jobs after completing their degrees.

Education at Work focuses on students’ successes and operates by partnering with universities to employ students in part-time, resume-worthy jobs, supporting forward-thinking companies in customer care centers built on or near campuses. 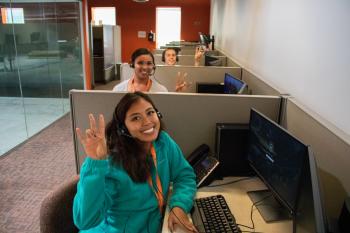 Through this partnership, Education at Work has disbursed more than $3.5 million in wages and $1.2 million in tuition assistance to ASU students. On Aug. 10, Education at Work opened a new 17,000-square-foot facility in collaboration with ASU. Discover Financial Services, located at Fifth Street and Ash Avenue in Tempe has created an additional 275 student positions.

“Students never have to sacrifice their academics for work, contributing to higher GPAs among EAW students,” Hidalgo added.

At scale, approximately 625 students will be employed in the new facility creating an annual impact of more than $6 million in wages and tuition assistance to Sun Devils.

David Phan, a senior studying business, data analytics and marketing, said he joined because of the tuition assistance offered.

“The tuition assistance has made a massive difference,” Phan said. “I’ll be graduating with significantly less debt than what I was initially expecting. In addition, I can put my efforts toward my school work and spending time with the people I care about.”

Phan has also learned valuable skills through the program.

“Working with EAW has exposed me to the world of business and has taught me skills that I will forever use in all areas of my life. I think one of the most important is communication. This will help immensely over the course of my professional and educational career.”

Omnia Imam, an elementary education major, said she applied to EAW because she wanted to start her first job in a position that would shine on her resume and help her gain experience for her future career.

“I’m learning not to stress out so much, because I’m surrounded by amazing staff members that make student lives very easy,” Imam said. “To me, they are my second family.”

Students interested in the program can apply now to earn $10.50 an hour and up to $5,250 a year in tuition assistance.

After enjoying the nation’s capital this summer, a delegation of Arizona State University students who attended UnidosUS 2018 in Washington, D.C., are starting a new academic year with the skills and inspiration to act.When ASU’s Educational Outreach and Student Services office offered to sponsor students and accompany them to attend the gathering, which UnidosUS described as a “public comm...

After enjoying the nation’s capital this summer, a delegation of Arizona State University students who attended UnidosUS 2018 in Washington, D.C., are starting a new academic year with the skills and inspiration to act.

When ASU’s Educational Outreach and Student Services office offered to sponsor students and accompany them to attend the gathering, which UnidosUS described as a “public commitment to the path forward for the Latino community,” 12 students involved with Access ASU; El Concilio, a coalition of Latino student organizations at ASU; and transborder issues jumped at the opportunity. 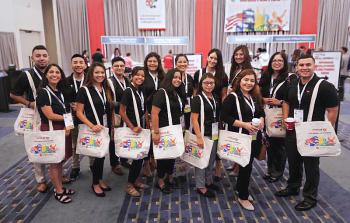 For most of the students, it was their first time in Washington.

“They took the chance and ran with it — they took in the sights but also walked into the halls of Congress, visited Rep. Ruben Gallego’s congressional office and returned to ASU ready to advocate for change and put what they learned into practice,” said Edmundo Hidalgo, vice president of outreach partnerships with Educational Outreach and Student Services at ASU. The attendees were even able to connect with ASU students in Washington and learn about inside-the-Beltway internships.

The conference, which is in its 50th year, provided workshops about the landscape and forecast on Latino priorities, student loan repayment, how to build credit and wealth, bilingual resources, educational equity for Latinos and how to shine during your career search. ASU students got to experience the first year of the Future Changemaker track, which focused on issues relevant to them.

“The new track let students focus on the skill-building that’s so essential to college students — getting out of debt, learning about personal branding and concrete job skills and more. But they also really connected with the speakers, who talked candidly about their intersectional struggles and inspired the students to be more bold and fearless in their pursuits,” said Hidalgo. “I think we all came back fired up and inspired to change things at home.” 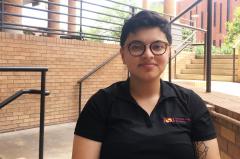 Andrea Garza, a senior at ASU studying psychology, said that one thing she gained from the conference was that she further understands why it is important to vote.

“(I plan to use) the knowledge that I learned from the conference to help others understand how important our impact is in the Latino community,” she said.

One of her favorite workshops discussed lack of representation of Latino culture in media. “When it is portrayed, (the workshop addressed) the lack of cohesive culture,” she said. She said one positive example was "Coco;" those involved in making the movie reached out to people in the Latino community in order to get their input on the film and make sure it was culturally conscious.

Garza said that during her time at the conference, she wanted to get a better idea of the goals of the UnidosUS organization, which was formerly known as the National Council of La Raza. What she left with was the knowledge that the community and everyone in it can make a big difference: “It was just really eye-opening. Some of these people started off with literally nothing. You really can come from nothing and still make an impact. We all come from a different story, but we all come from a very universal community.” 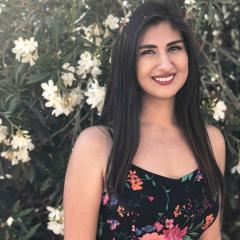 Erika Galindo, a senior at ASU majoring in justice studies and transborder studies, said she wants to go to law school to study immigration law; for her, attending the conference was a way to network and harness the power of everyday people.

Galindo’s favorite workshops included one that focused on celebrating Hispanic journalists telling the stories of their communities. Another workshop that stood out to her was the Future Changemakers breakfast.

“They had the speaker (Michelle Poler) come out and talk about facing your fears. It really inspired me to not give in to my fears and actually go out there and do what I should be doing without giving into whatever I have in my mind,” she said.

Galindo said that the UnidosUS conference was important for students to attend because it offers the workshops to motivate them, to inspire them and to give them the information they need to implement what they learned at the conference in the real world. She said it also gives students the opportunity to speak to people they normally wouldn’t have the opportunity to meet.

The problems and the solutions 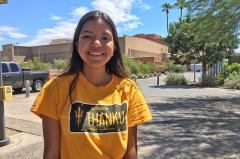 Consuelo Arroyo, a sophomore at ASU studying global health, said she wanted to attend the conference because she wanted to be more involved in the LatinxA fluid community of people of Latin American origin or descent. community. This summer she joined the Hispanic Heritage Month planning committee. She is also the chair of Aventura Cultural, a cultural and educational group.

“I never really get exposure to the diversity that exists within the Latinx community, the issues they are facing and what I can do to help that. During the conference, it was actually talking a lot about civic engagement, which is something that I am very interested in,” Arroyo said.

But Arroyo was also struck by how the community issues she heard about tie directly to her field of study, health care.

“I learned a lot about what my community struggles with in terms of health care, and I’m just really excited to be able to build a career off of that.”

Junior Joaquin Ramos echoed the idea that the conference changed how he will approach his studies in criminal justice at ASU. He called the experience “life changing.”

“This was a one-of-a-kind experience,” Ramos said, because he not only learned about problems but solutions. “Unidos provided me with the chance to learn about different policies that affect not only Latinos but all citizens in the United States.”