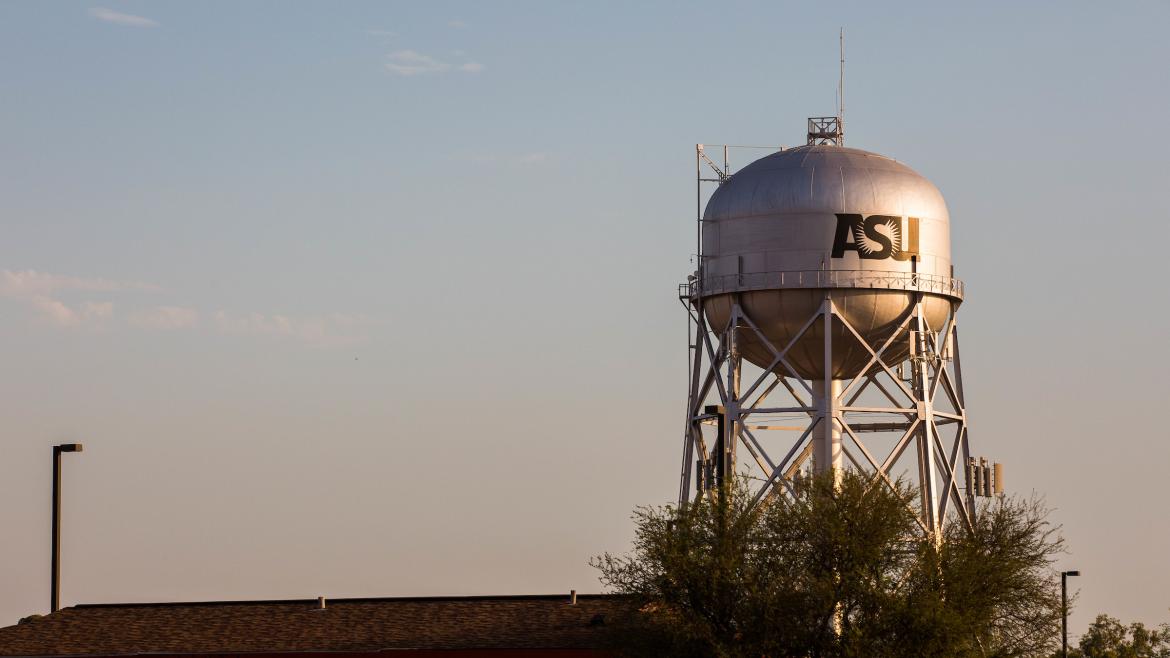 A big university offers many opportunities, but it also can be a bit overwhelming. Students who choose one of Arizona State University’s smaller metro Phoenix campuses can still take advantage of the support and nurturing of Barrett, The Honors College wherever they are.

That’s what Dana Miller found when she decided to go to the ASU Polytechnic campus in Mesa.

“I was super shy coming into college, so the idea of being on a massive campus terrified me,” said Miller, a junior majoring in applied biological sciences.

“What I like about Poly is that it’s ASU on a smaller scale, and the nice thing about Barrett here is that it’s even smaller than that. It’s a nice little community.”

ASU’s honors college is marking 30 years. In 1988, the Arizona Board of Regents authorized the creation of the University Honors College at ASU, the first four-year, undergraduate, residential honors college in the United States. This week, Barrett, The Honors College will see more than 2,000 high-achieving students coming to ASU’s four campuses in the Valley.

Mark Jacobs, who has been the dean of the honors college for 15 years, said the staff and faculty work hard to create a nurturing community.

“We talk a lot about the Barrett family,” he said. “There are 125 people across all four campuses, staff and faculty, working for Barrett, which is not so many that we can’t have that family feel.” The dining hall for Barrett, The Honors College on the Tempe campus. Photo by Jarod Opperman/ASU

Jacobs said that 81 percent of Barrett's 7,200 students are on the Tempe campus. But the program has unique aspects at every location — Tempe, downtown Phoenix, Polytechnic and West.

“As ASU opened other campuses and built them up, Barrett was built with them, and as the four campuses have their own flavor, so does Barrett,” he said.

The honors students can live together in residential communities — which means a high-rise dorm in downtown Phoenix but a neighborhood of small houses at Polytechnic that used to be military housing when the campus was a base.

All of the Barrett students share the same support system and academic experience. Each takes 36 honors credits, including the two-semester Human Event course during freshman year, and completes a three- or six-credit thesis or creative project. 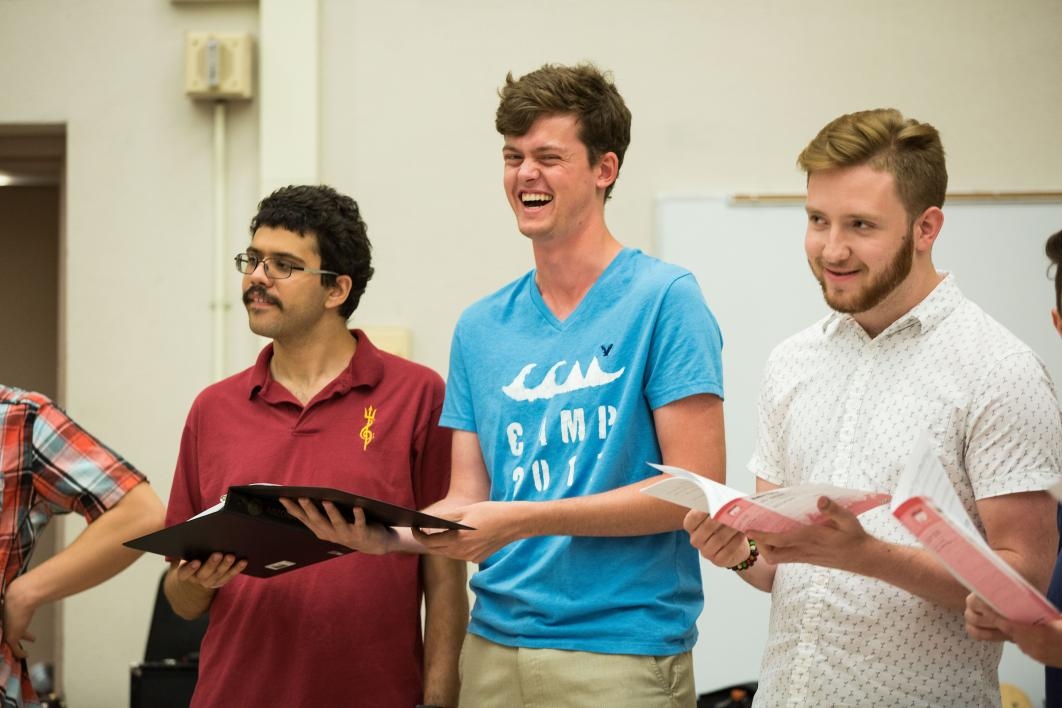 Students laugh during rehearsal for the Barrett Choir last spring. The choir is open to honors students from every campus and all majors. The Barrett Choir, which has about 80 to 100 members, sings a wide repertoire of choral works. 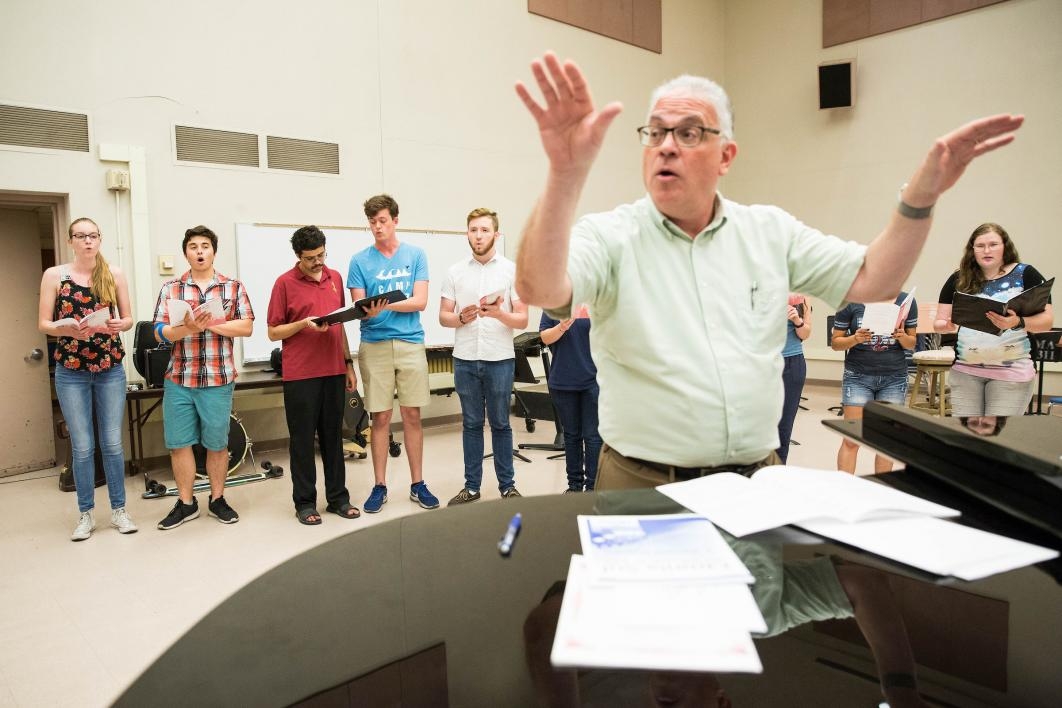 David Schildkret, a professor of music who founded the Barrett Choir in 2011, said the class takes energy and focus but also serves as a stress reliever for the academically driven honors students. 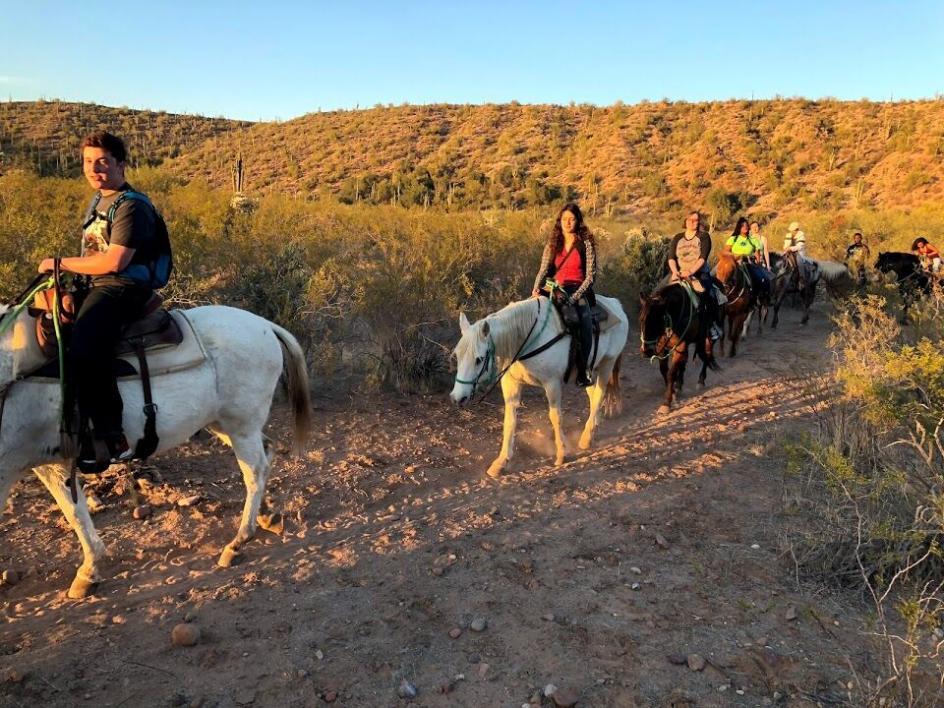 The Barrett programs offer activities unique to each campus. Students in Barrett at the Polytechnic campus went on a trail ride in the Superstition Mountains last year.

Photo courtesy of Barrett, The Honors College at Poly 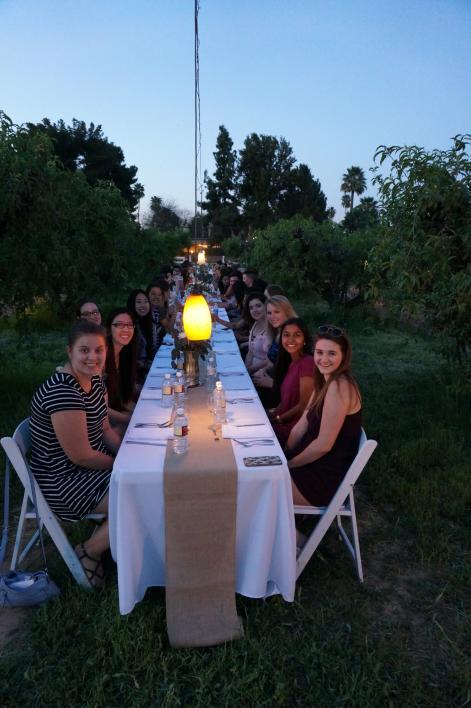 Every Barrett program schedules a signature event that takes advantage of its campus location and is open to all Barrett students across ASU. Barrett at the Polytechnic campus has a dinner outdoors in a local orchard to celebrate the agricultural heritage of the area.

Photo courtesy of Barrett, The Honors College at Poly

This month, the Barrett programs at each campus welcomed incoming students in their own way. The Polytechnic, Downtown Phoenix, West, and Tempe programs take their freshmen to camp in Payson or Prescott. There, over glow sticks and s’mores, they connect with advisers, faculty, peer mentors and one another.

Manuel Merino, a junior criminology major, said that Camp B-Town, the camp for Barrett Downtown Phoenix first-year students, is a special memory of his freshman year.

“It’s good to get out of Phoenix, and we did a lot of bonding and activities with our group,” said Merino, who is based at the downtown campus.

Kira Gatewood, senior program coordinator for Barrett in downtown Phoenix, said that the staff at each campus collaborates to make sure Barrett students can make the best of each location.

“We really try to make sure all of our students are going to have an experience that has the same components at every campus,” she said. “And we figure out ways to make that happen in a way that highlights the uniqueness of each campus.”

Gatewood said that the downtown campus capitalizes on its proximity to the heart of city and state government and services.

“We’re an urban campus, and that’s something we’re proud of,” she said.

The location is a boon to the majors there, including journalism, nursing and public service.

Ashley McDonald, a senior, is doing her thesis research on child victims in the criminal justice system and hopes to have a career in the juvenile justice system after she graduates in December.

“Being downtown I’m able to work with Phoenix Police Department, I’ve worked with the Maricopa County attorney’s office, I go to court, I’ve interned with Maricopa County as a victims' advocate,” she said.

“It’s all come together here.”

All the campuses maintain suites where Barrett students can relax. At the West campus, many of the Barrett students commute, and the suite in the University Center is an inviting space for them to feel at home during the day and access the built-in support system. Advisers, staff and faculty are housed in the suite.

Susan Estby, student recruitment coordinator, knows exactly what advice the students need. Estby was a Barrett student at the West campus before she graduated in 2013.

“Barrett allowed me to make connections without even realizing it,” she said.

“If you tell students, ‘There’s this support offered for you,’ sometimes they feel less-than, or that they’re not honors if they take it. So by having this entire setup, it allows that to happen.”

The West program offers activities over the breaks and, because many students have children or care for siblings, many events are open to families, Estby said.

“We take away the myth that the typical college student is one with a nuclear family who is going to college right from high school because that’s not the norm now,” she said.

“We try to let our students know that anything can happen and we’re here if you need us.”

Each campus has its own signature event that’s open to all Barrett students. West has the Womyn’s Leadership Conference, downtown has a red-carpet event at the Phoenix Art Museum, Tempe has the Gold Standards Awards to recognize outstanding students and Polytechnic has a farm-to-table meal called Dinner Down the Orchard.

“We have a lot of agriculture in this area, and we wanted to show students from all four campuses our connection to the local agriculture,” said Jennifer Brady, program manager for Barrett at the Polytechnic campus. The last two years, the dinner was held at Schnepf Farms, where the students got a tour before sharing a meal together.

“It’s great to see the students from all the campuses meeting each other and making those connections,” she said.

‘We want to serve them’

The annual events are not the only chance for Barrett students to interact. Student groups and activities on the Tempe campus are also open to all honors scholars.

One activity that draws from all campuses is the Barrett Choir, an ensemble open to any honors student regardless of singing experience.

David Schildkret, a professor of music, formed the ensemble in 2011 because the School of Music wanted to offer more opportunities to nonmajors.

“It was my suspicion that in the honors college would be many students who participated in music in high school but weren’t doing that at ASU,” he said.

The choir, which usually has about 80 to 100 participants, draws from all four campuses and every major.

“I’m always trying to balance the familiar with broadening the scope a little bit,” he said of the repertoire. The choir has performed everything from Broadway songs to the Mass in C Major by Beethoven to choral pieces by Eric Whitacre.

The activity is rigorous but also acts a stress reliever, Schildkret said.

“We’re still trying to do something of quality, and that takes effort and energy and focus. One value is that the kind of energy and focus required for music is different from what they normally focus on. The old adage is that a change is as good as a rest,” he said.

“There are days when I walk in and I can tell everyone has a project due in the next two days, but we leave it at the door.”

Jacobs said that Barrett not only has grown in the time he has been here — this is the fourth straight year the incoming class topped 2,000 students — but has also increased the quality of the cohort. Even with expansion, the average SAT score has inched up to about 1380, and about 47 percent of the group are students of color. The college has also increased engagement, with more than 150 activities offered to honors students at the campuses.

One of the first changes he made when he came was to abolish the rule that Barrett students had to maintain a 3.4 GPA. Many students were kicked out of the honors college for getting a B.

“I was horrified,” said Jacobs, who found out about the rule when a student stopped by to say goodbye to him.

Now, Barrett students don’t have to maintain a minimum GPA but they must have a 3.25 upon graduation or they don’t receive the honors certificate.

Jacobs also boosted the retention rate in Barrett, which was a dismal 25 percent when he arrived — similar to honors programs at other universities. The reason, he said, is that students wanted the benefits of being in the honors college, such as early course registration and a vibrant living community, but didn’t want to do a thesis project.

“We have worked hard over the last 15 years to get that figure to very near 89 percent,” he said. Students can receive $750 toward the cost of their project as well as other funding for academic interests. The college brought alumni back to talk about the value of the thesis experience and began celebrating the projects at a thesis symposium.

Jacobs said that not many universities have a comprehensive honors program that’s available to students in every major at multiple campuses.

“We could cut our size by a quarter and be super elite but that’s not what we’re trying to do,” he said. “We’re trying to get that student in the state who’s done well in high school and who wants to be challenged intellectually, and we want to serve them.”