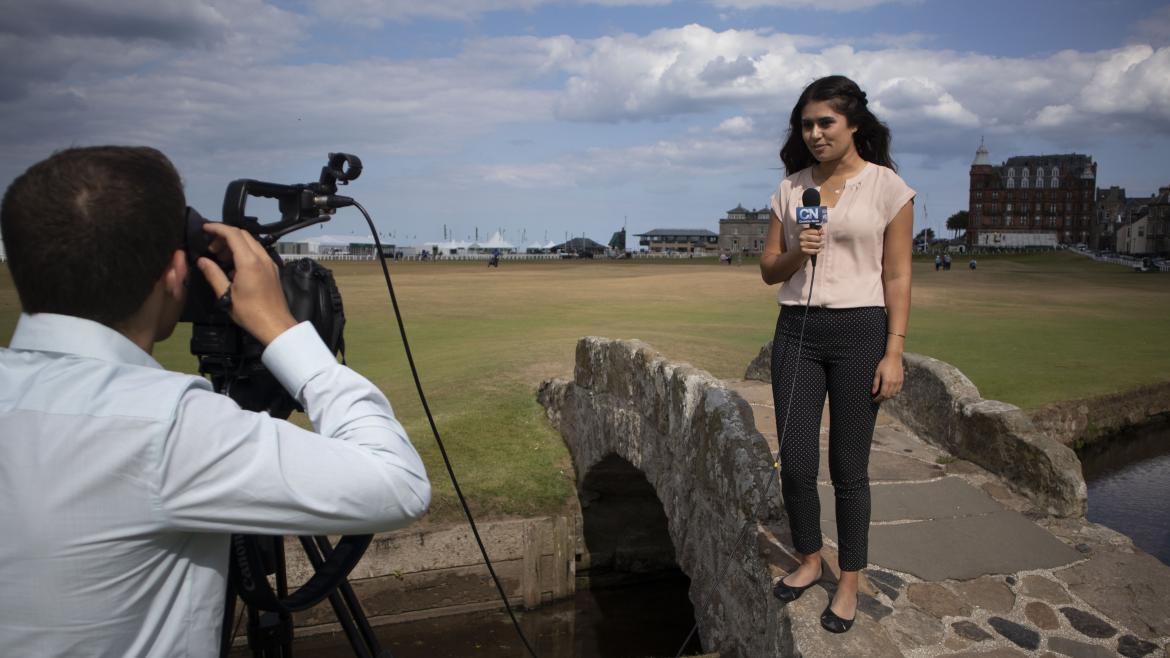 Fourteen days. Twelve students. Seven cities. One memorable trip, and lots of cool stories. And there was haggis, too … fore everyone.

A dozen students from the Walter Cronkite School of Journalism and Mass Communication at Arizona State University recently ventured to Scotland for an immersive study-abroad program that had them studying golf’s roots while honing their journalism skills and learning about a new culture.

“We wanted to create a news operation in a foreign country but also provide a one-of-a-kind opportunity that helps students gain valuable experience while putting something on their resumes that helps set them apart,” said Brett Kurland, director of sports programs at the Cronkite School.

The school is home to immersive professional programs in which students regularly cover professional and intercollegiate sports from bureaus in Phoenix and Los Angeles. Since the Cronkite School announced new sports journalism degrees in 2014, students have covered major sporting events, including the Super Bowl, the Summer Olympics and the NCAA Final Four.

Kurland said it’s the first sports journalism study-abroad program at Cronkite not tied to the Summer Olympics. He said his motivation for creating the trip was to increase the study-abroad opportunities available to sports journalism students beyond the Summer Games, which take place every four years. Cronkite brought students to the Summer Olympics in 2012 and 2016, and Kurland is currently working on a 2020 trip to Tokyo.

“This trip was designed to open the door to international reporting experience for more sports journalism students,” Kurland said, who led the trip along with Cronkite PhD student and faculty associate Gail Rhodes.

The group traveled to Edinburgh, Glasgow, Perth, St. Andrews, Carnoustie, Aberdeen and Gullane to discover golf’s roots and report on the nuances of the game in the country where it was born.

They tried to incorporate as much golf and Scottish culture as possible, including visiting Edinburgh Castle and eating haggis their first night on the town.

“You know, it wasn’t that bad,” said Drake Dunaway, a 24-year-old graduate student. “It gets a bad rap. Pretty much like the American hot dog.”

Other stops included the British Golf Museum in St. Andrews, Glasgow Golf Club, the Royal Burgess Golfing Society, the St. Andrews Golf Company, the Scottish Open, the British Open, and the Old Course at St. Andrews, arguably the most iconic golf course in the world. They also met with the Golf Environment Organization, which pursues sustainability in and through golf, as well as members of the NBC and Golf Channel crew in the 18th tower at the British Open on the Monday of tournament week.

For this trip, students were required to write or produce one enterprise story or video, and report daily short photo stories that were shared via Instagram. Kurland said the idea was to identify compelling people and sources for each post, which included a quote and a photo to help tell their story. He said the ultimate goal was to capture the entire picture and essence of each location.

“The idea was to find real-life characters and tell their stories,” Kurland said.

Sports journalism major Scotty Gange, 19, said he produced a story in Edinburgh on Bruntsfield Links, located just outside the front door of the Golf Tavern, the oldest golf clubhouse in the world, tracing its roots back to 1456. He said he learned about the two places through an Edinburgh city guide.

“It’s a 36-hole chip and putt course located in the middle of the city near the University of Edinburgh,” Gange said. “You pay five pounds and get a chipping wedge and putter. Students, in groups of usually 20, go there, have beers and play golf. It’s a way for them to relax.”

Gange said he didn’t know much about golf before the trip, but now he has much more respect for the sport and the complexity of filming a major golf tournament.

“With football and basketball, there’s one ball, one field or court,” Gange said. “With a golf open, there’s 144 players, 144 balls all playing in the span of about five hours. Seeing that unfold from a broadcaster’s perspective was eye-opening.”

Dunaway covered a story that has been plaguing golf around the world: How to invigorate the sport with newcomers.

“Memberships are down and the younger generation either doesn’t have the time or money, or would rather spend their money on other things that aren’t as time consuming or cost as much,” Dunaway said. “They are trying to reverse this trend.”

Dunaway visited courses and golf societies that are coming up with initiatives such as shorter courses, playing tee forward, team formation and prizes, no golf fees for players under 18 and speeding up the game.

Student Nicholas Welter took an old-school approach to his story and reported on the manufacturing of wooden clubs at the St. Andrews Golf Company. According to Welter, the manufacturer dates back to 1881 and is the only Scottish company still producing these special clubs, which retail anywhere from 90 to 300 British pounds per club.

“It’s a niche thing and the wooden clubs are made of hickory,” Welter said. “They’re mostly manufactured as collector’s pieces, and players still compete in hickory tournaments throughout the world,” said Welter, a 20-year-old senior.

Top photo: Cronkite journalism student Madison Kerley tapes a segment for Cronkite News on the Swilken Bridge at the St. Andrews Links golf course in St. Andrews, Scotland. Kerley was one of a dozen students who went to Scotland on a study-abroad program that looked at the birthplace of golf. Photo courtesy of Brett Kurland

Editor's note: This is part of a series of profiles of fall 2018 incoming ASU students.So many of Natalie Glatt’s family members have graduated from Arizona State University — her mother, all four of her aunts, her brother — that she wasn’t sure if she wanted to continue the tradition or try something completely different.“In the end,” she said, “I realized ASU is a great school a... 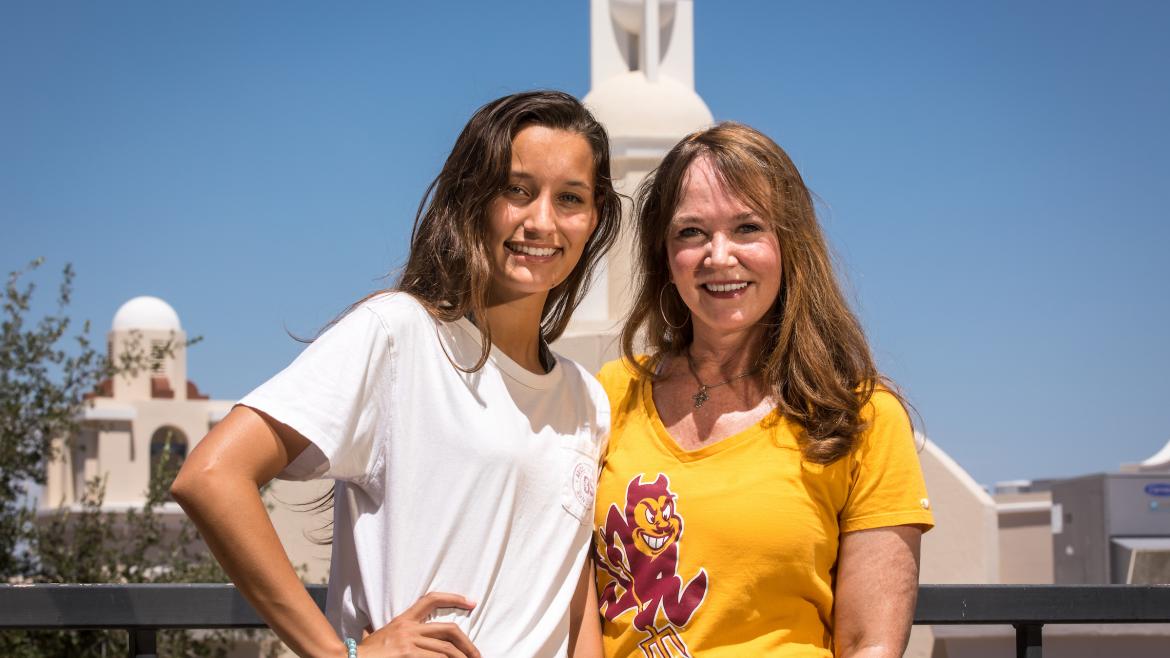 Natalie Glatt was inspired by her mother, a 1991 ASU alumna, to pursue her nursing degree as a Sun Devil

So many of Natalie Glatt’s family members have graduated from Arizona State University — her mother, all four of her aunts, her brother — that she wasn’t sure if she wanted to continue the tradition or try something completely different.

“In the end,” she said, “I realized ASU is a great school and decided to go for it.”

But picking up the Sun Devil mantle isn’t the only legacy she’s upholding — when Glatt begins her freshman year at the College of Nursing and Health Innovation on the Downtown Phoenix campus this fall, she’ll be following in the footsteps of all the women in her family who were nurses before her.

“It surprised me when she chose that field because she had always talked about going into theater,” Mary McDonough said of her daughter, who recently graduated from Arizona School for the Arts. “I was overjoyed.”

McDonough came to Phoenix in the 1980s to further her education after earning her LPN and practicing as a nurse for five years in Oregon. She joined her sisters, who were already at ASU, and the five of them shared a house near Dobson Road, biking along now-paved backroads onto campus every day.

“The camaraderie at the college of nursing was really great and the learning opportunities were just phenomenal,” she said. “What I learned then propelled me into what I’m doing now.”

What McDonough is doing now is running her own in-home care agency for seniors, Nightingale Homecare, which she founded in 1994, only a few years after graduating from ASU with her BSN.

Answer: It came down to ASU and (University of Arizona). I chose ASU because there’s so much going on in Phoenix and it’s such a beautiful city. Every night there’s something different. Plus, the nursing program is really great and this is where all the hospitals are. And at ASU, even though it has five campuses, so it’s big in that way, each campus is really intimate as well.

Q: What drew you to nursing?

A: My aunts are all nurses and my mom is a nurse, so it felt kind of natural. I got interested in obstetrics because that’s what my aunt does, and she was telling me about it and how there’s something about getting to know your patients during such an important time in their life that is so powerful. To be able to help bring someone into the world, that’s just really cool to me.

Q: What are you most excited to experience at ASU?

A: High school was great but I’m really excited to get to meet new people. My school was really small, so we all got to know each other pretty intimately but sometimes you just need to branch out. So I’m excited to start new classes and meet new people and make a lot of friends.

A: There’s so much going on just within the campus itself. I used to hang out with my brother, who also went to ASU, and he showed me all these cool cafés and stuff. My favorite coffee shop, The Grand, is right across the street.

A: I think I have a lot to bring to the nursing program because of my experience growing up around my mom and her home care business. I kind of already have a base of knowledge instead of just starting brand new, so I think that’s gong help me a lot.

A: My boyfriend and I are watching a show called "Sugar Rush" on Netflix. It’s a new show. We love watching our cooking shows.

Q: What do you hope to accomplish during your time at ASU?

A: In addition to getting good grades, college is a time to make yourself. You get to experience what it’s like to live on your own for the first time, and there’s always so much going on at ASU, with clubs and organizations. So it’s really a time to kind of pick and choose what you want to experience to help shape yourself into who you’re going to be in the future.

A: I like to bake when I have the time. Senior year really kicked my butt so I didn’t have a lot of time for it. My signature dish is my grammy’s recipe, apple cake. I used to have it memorized but I haven’t made it in a while.

A: It would probably be something to do with the environment. I think people are really kind of messing the planet up. There are people in the government who have so much power to change how much waste we make and how we deal with that waste. And then there’s the problem of energy, too.

Top photo: Incoming nursing freshman Natalie Glatt, left, and her mother, Mary McDonough, a 1991 ASU nursing alumna, pose on the balcony of the Mercado in downtown Phoenix, on July 19, 2018. Glatt was inspired by her mother and aunts to pursue a career in nursing. Photo by Charlie Leight/ASU Now