For the fourth year in a row, the ASU Foundation has announced the completion of a record year in fundraising for academic programs, research and initiatives at the university.

At the close of the 2018 fiscal year, numbers show donors throughout Arizona and the world contributed over $253 million for ASU to advance access and excellence. The previous record of $222 million was set in fiscal year 2017. 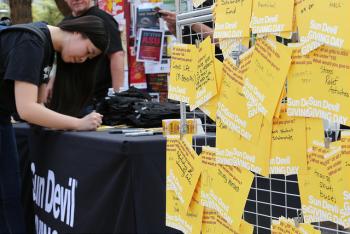 On Giving Day, members of the ASU community who make a donation select the area of the university they want their funds to support. Download Full Image

“There is an outstanding future for our university, with rising numbers of graduates, levels of research, and economic impact,” ASU President Michael M. Crow said. “Our philanthropic supporters and partners play an integral role in our success, helping us advance our pursuits to make a lasting impact on the students and communities we serve.”

More than 105,000 individual, corporate and foundation supporters gave to ASU this year.

RELATED: On Giving Day, ASU staff, faculty donate to the areas of the university they care most about

“Without our donors, the ASU Foundation's success would not be possible,” said ASU Foundation CEO Gretchen Buhlig. "Each and every gift helps change the lives of students in extraordinary ways.  Our supporters give students the opportunity to succeed, and we are grateful to witness that every day."

Campaign ASU 2020, a comprehensive effort to permanently raise the long-term fundraising capacity of the university, has raised nearly half a billion dollars for student access, excellence and success, ensuring that every qualified student can come to ASU — and thrive.

Frank Smith, who graduated in May, never thought college was an option. Throughout his youth, he lived in 27 different foster homes. Despite instability at home, Smith was determined to get a college degree and entered ASU as an Armstrong Scholar, an Obama Scholar, a Spirit of Service Scholar and a Nina Mason Pulliam Scholar. He was elected the youngest student body president ever at the ASU Downtown Phoenix campus.

“I always knew the numbers were against me, but I also knew it could be different. I definitely don’t think I would be here without the teachers and mentors who believed in me, and I’m grateful,” he said. “I want to be a role model for foster children and show them they can hope for something better and achieve it.”

Smith is one of nearly 10,000 students each year who receive scholarships through private support.

Private support also funded a wide range of impactful gifts this year, including a new research fund for the Department of Psychology; support for blockchain curriculum in engineering, business, and law; and funding for students to design, build and fly space vehicles.

One gift made headlines in the sustainability world: Kelly and Brian Swette, founders of Sweet Earth Natural Foods, made a major gift to establish the Kelly and Brian Swette Center for Sustainable Food Systems at Arizona State University, and to create the Swette Family Scholarship Program, to provide financial support to students from agricultural farm-working and food-working families.

“Private support is critical to the success of ASU, and we are grateful to the community of supporters whose contributions are advancing the New American University,” said R.F. “Rick” Shangraw Jr., chief executive officer of ASU Enterprise Partners, the parent organization to the ASU Foundation. “Their support of students, faculty, research, and bold ideas help ensure a very bright future.”

The ASU Foundation is a private, nonprofit organization dedicated to advancing the mission of ASU as the New American University. For the seventh year in a row, it has received the highest ranking for efficiency and transparency from Charity Navigator, the largest independent nonprofit evaluator.

The Critical Languages Institute at Arizona State University has added Ukrainian to its roster of languages taught to bolster national security, and it’s one of the few immersive programs for that language in the United States.Five students are taking beginning Ukrainian at the Tempe campus this summer in a seven-week course designed to accelerate competence in beginners. Besides the spoken lang... 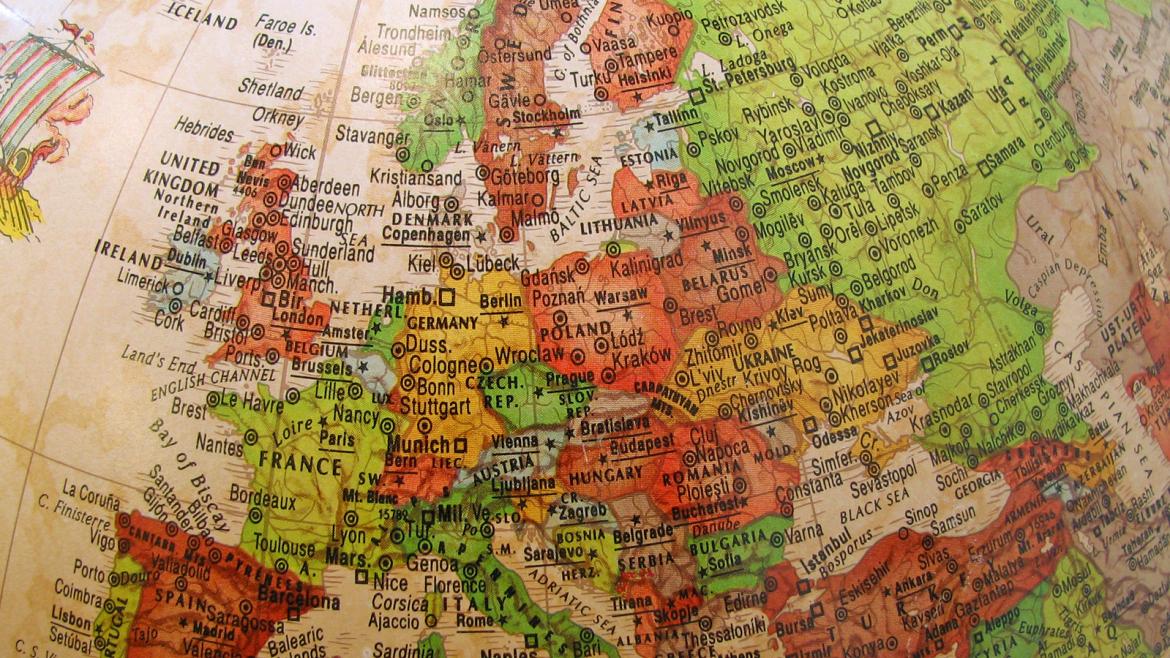 The Critical Languages Institute at Arizona State University has added Ukrainian to its roster of languages taught to bolster national security, and it’s one of the few immersive programs for that language in the United States.

Five students are taking beginning Ukrainian at the Tempe campus this summer in a seven-week course designed to accelerate competence in beginners. Besides the spoken language, they're also learning to read and write in the 33-letter Ukrainian version of the Cyrillic alphabet.

The U.S. government has designated Ukrainian as a critical language with proficient speakers in high demand, and the institute, part of the Melikian Center in the College of Liberal Arts and Sciences, teaches 11 of those languages. This summer, in addition to Ukrainian, the institute offers Albanian, Armenian, Bosnian/Croatian/Serbian, Hebrew, Indonesian, Persian, Polish, Russian, Turkish and Uzbek.

Geopolitics plays a role in why languages are deemed to be important. After the dissolution of the Soviet Union in 1991, Ukraine achieved independence, and after that, “A whole new generation is growing up speaking Ukrainian,” said Mark von Hagen, a professor of history and global studies who was interim director of the Melikian Center last year. He launched the program after securing donations to fund it.

The institute’s courses are tuition-free, funded by federal agencies, partnerships and donors, though students pay an administrative fee and the cost of study abroad. The classes are open to anyone, including high school juniors and seniors. The federal Title 8 program pays for language instruction for graduate students, such as Brandon Urness, a student at the Thunderbird School of Global Management at ASU.

He became interested in Ukraine after hearing Sen. John McCain discuss the Russian invasion of Ukraine’s Crimean Peninsula in 2014. Clashes between rebels and Russian forces in the region continue.

“Ukrainian is the most critical language in the world today with what’s happening in eastern Ukraine with the Russian annexation,” said Urness, who has a bachelor’s degree in political science. “That was the first time in my life I’ve seen something like that and it was shocking to me.” 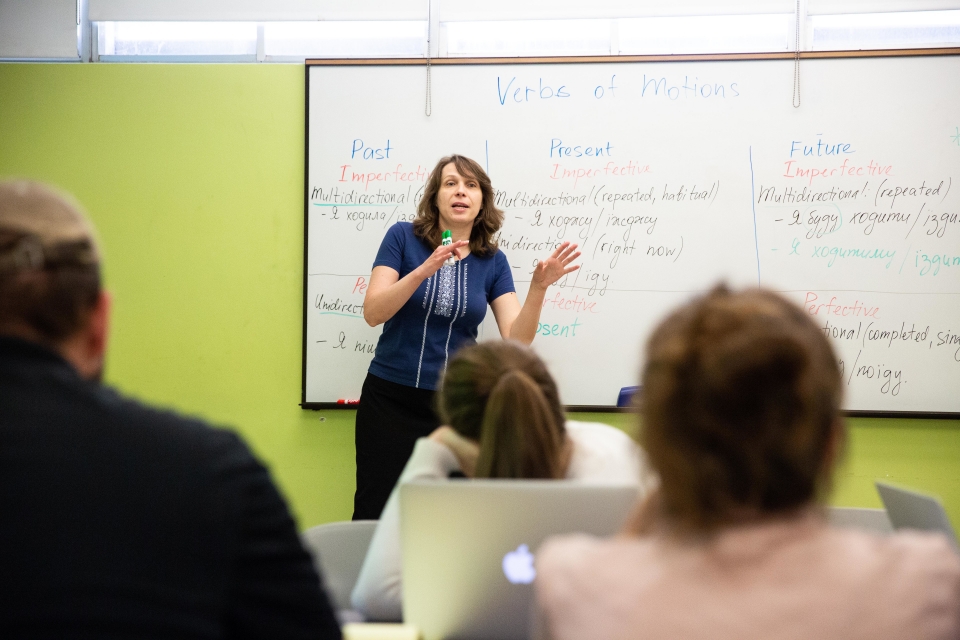 Professor Olena Sivachenko goes over motion verbs with her students during the Ukranian language course. The unique course is an intensive language course teaching the Cyrillic language and Ukranian to non-native speakers in a matter of weeks. Photo by Deanna Dent/ASU Now

Urness, who would like someday be an election observer in Ukraine, said the class is so intense that he’s been dreaming in Ukrainian every night.

“One of the biggest challenges is the amount of time it takes to master a language,” said Urness, who became fluent in Mongolian while serving on a mission there.

Jordan Tomlinson, a senior majoring in medical studies, is learning Ukrainian because he plans to attend medical school in Ukraine, where tuition is much cheaper.

After the half day of class, the students spend many additional hours studying Ukrainian on their own.

“For me, it’s listening to music, watching videos and talking to my friends in Ukraine,” Tomlinson said.

“You just have to try to speak the language as much as you can.” 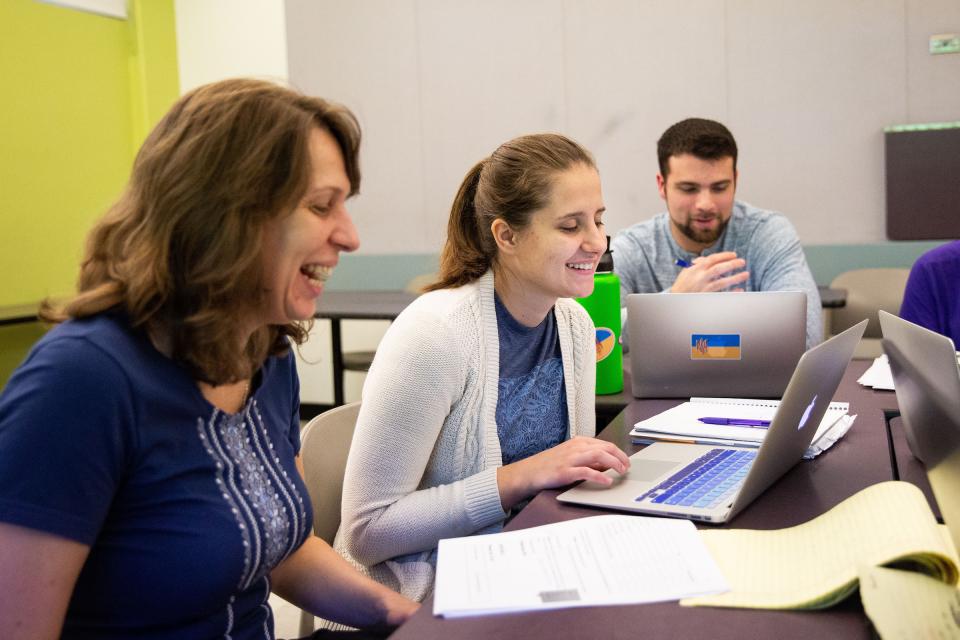 The immersive courses are not just for prospective diplomats, but also for people who study anthropology, history, literature, human rights and military policy, von Hagen said.

“A lot of people who are doing research in Russia are finding it more difficult because of restrictions on archives and interviews with officials, but many of us are aware that it’s easier to do the same work in Ukraine. They’ve declassified pretty much everything,” said von Hagen, who is teaching at the Ukrainian Free University in Germany this summer.

He said that the country is safe, except for the occupied area, which will likely have to adjust to being a “militarized democracy.”

“I teach Ukrainian history as an example of empires,” he said. “Russia was an empire and they’re still parting painfully with the past. All empires go down ugly.”