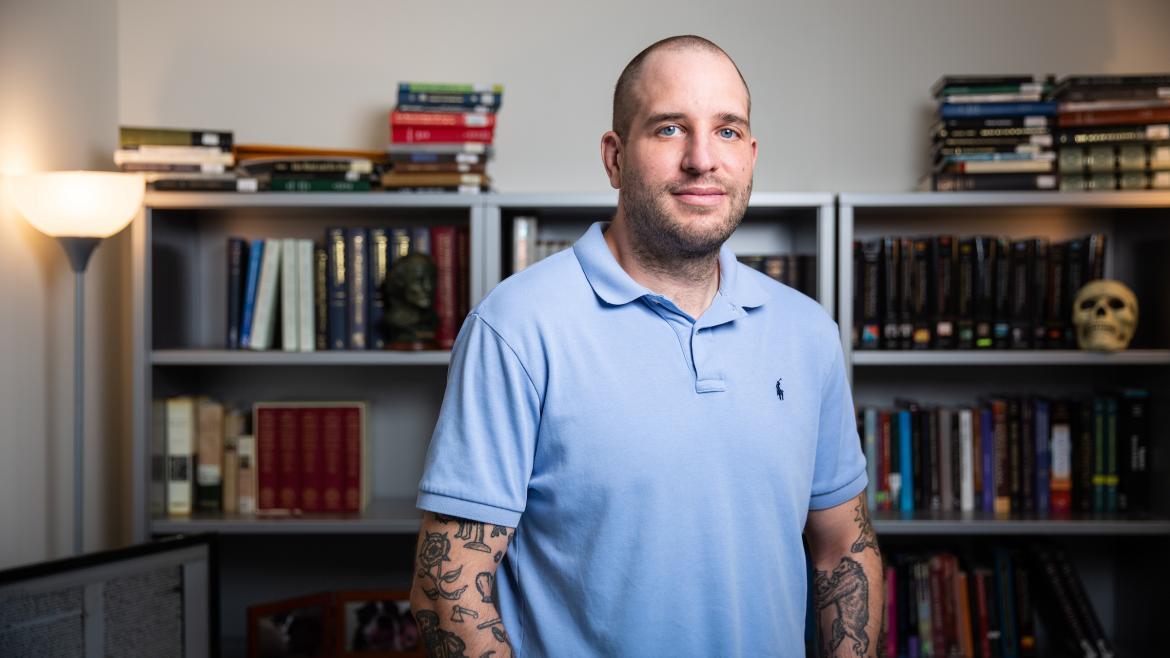 Want to know more about the romantic lives of 18th century English women? Read a Jane Austen novel. Ever wondered about the exploits of the flappers of the Roaring '20s or post-World War II counterculture artists? Look no further than the stories of the Lost Generation novelists and the poetry of the Beats.

In his debut book, “Emotion in the Tudor Court: Literature, History, and Early Modern Feeling,” ASU Assistant Professor of English Bradley Irish argues that literature and all its inherent emotion has much to reveal about the time, place and people it reflects — and that we need more than one mode of analysis to uncover that.

“My sense is that we can’t understand any phenomenon by just staying in one disciplinary lane,” Irish said.

His introduction to Shakespeare in high school sparked a love affair with Renaissance literature that has endured to this day. Yet Irish always harbored a keen enthusiasm for the social sciences. As a scholar at ASU, his dual interests and the university’s emphasis on interdisciplinarity served to inform his first foray into academic authorship.

“If I’m thinking about emotion in literature, it would be a shame if I only considered what literary scholars think about emotion,” he said. “Because on the other side of campus, you have absolutely brilliant people thinking about emotion from an entirely different perspective. So I want to know what they say about it and how I can bring it to bear on my particular field of interest.”

“Emotion in the Tudor Court” marries theories about emotion from the humanities and the sciences in a fresh approach to literary and cultural analysis. Underscoring its innovation was Irish’s decision to make the book available to download for free via Knowledge Unlatched, an online platform that makes scholarly content accessible to everyone.

Read on for a taste of the book’s offerings and Irish’s thoughts on open access.

(Editor's note: Responses have been edited for length and clarity.)

Question: How might a literary scholar differ from a psychologist or a neuroscientist in the way they look at emotion?

Answer: That’s one of the things the book is really interested in thinking about. In the humanities, the history of emotion has been a booming field over the last 10 years, but humanists tend to focus on historical difference. They think of emotion as culturally and temporally contingent; they’re looking at how emotion was different 500 years ago. And I do that, but one of the things that I’m also thinking about is how emotion might be the same. That’s where the psychologists and the neuroscientists can help us. Because they’re not thinking about how an emotion manifests at a particular moment in time, they are investigating how emotion works as more of a transcultural, universal phenomenon. There’s an increasing consensus that emotions are both the product of culture and the product of nature. So you can’t understand the phenomenon fully by only looking at one side of the coin.

Q: Why the sudden interest in emotion among humanities scholars?

A: Emotions have long been taken for granted, particularly in literary studies, because literature is self-evidently about emotion; literature makes us feel emotion, characters are expressing emotion. … But what people never really did is consider how the emotions themselves work. For example, "Othello," everyone knows, is a play about jealousy. But at the same time, it wasn’t until recently that people started to ask, how does jealousy work? What are the dynamics of jealousy? So that’s one of the things that people are starting to do, is interrogate these modes of emotion. And even in the sciences, emotion has not always been subject to intense scrutiny. I’m not an expert on this, but it’s probably only been since the '70s that people started to become interested in emotion in the sciences, and that’s kind of filtering over into the humanities. I think it’s also just a realization, based on work in the sciences, that emotions are absolutely central to just about all aspects of human life. We used to think that they were these inconvenient messy things that distracted us from thinking clearly and distracted us from reason. But it’s clear based on the available evidence that that‘s not the case, that emotions are absolutely central to how we experience the world. So they really are things that need to be interrogated as phenomenon in their own right.

Q: What does knowing how a particular emotion operates tell us about a piece of literature that utilizes that emotion?

A: One of the things that modern research tells us about disgust is that there are certain disgust elicitors, things that make us feel disgust: things having to do with spoiled food, blood and disease, the body, death, etc. In the first chapter of my book, I talk about a figure called Cardinal Thomas Wolsey, who was one of the most influential politicians in the first half of Henry VIII’s reign. He was wildly unpopular for a variety of reasons, and lots of people wrote satiric poems about him. What I discovered is that those poems are animated by these so-called disgust elicitors. They’re talking about the food he eats, they’re talking about him as a disease, they’re talking about him as sexually compromised. And one of the things that disgust is interested in doing is policing both the literal body and the symbolic body, protecting them from harm. So we don’t want our bodies exposed to disease or rotten food, but we also don’t want them exposed to things that are morally problematic. And this man Wolsey was ultimately determined to be morally compromised. So the way that disgust unites both a compromised body and a compromised moral system is something I was only able to understand once I knew how disgust worked.

Q: Is that something writers were doing intentionally?

A: No, I don’t think it was intentional. That’s one of the things that I think is fascinating about it. It just turned out that way because there’s a transhistorical continuity there that tells us something about the way disgust works for humans in general. It helps to explain why literature still affects us and moves us hundreds of years later. I’m not saying that emotions were exactly the same back then, but there’s a part of them that seems to be.

Q: Why was it important to you to make your book open access?

A: My book is open access because of an organization called Knowledge Unlatched. Academic books are very expensive and they’re not something that everyone can get their hands on. I want to share my enthusiasm for early modern literature and culture with as many people as possible, so I wanted this book that I spent a lot of time on and that I’m very proud of to be something that people are able to access anywhere in the world without having to pay for it. So when my publisher asked me if I wanted to be involved in the Knowledge Unlatched program, I jumped at the opportunity. And I’m already seeing the results of that decision. The book is available for download on many different sites and it already has hundreds of downloads. It’s clear that far more people are accessing the book than otherwise would be able to. It’s also available for teaching at no cost.

Sophomore pitcher, G Juarez claimed her second gold medal in as many summers as Puerto Rico defeated Mexico in the Grand Final of the 2018 Central American and Caribbean Games, Thursday evening. ... Sophomore pitcher, G Juarez claimed her second gold medal in as many summers as Puerto Rico defeated Mexico in the Grand Final of the 2018 Central American and Caribbean Games, Thursday evening.