A series of fortunate events

This is a story about timing.

Specifically, how the Sonoran Desert’s most mysterious creatures delay leaving the nest until there’s a good food supply waiting for them. An Arizona State University study about Gila monsters was boosted by the lucky discovery of one particular nest of those shy, black-and-orange desert-dwellers famous for being venomous.

They were unearthed at the right time, by the right person, and science scored.

Contractor Mike Pfander frames high-end homes in Tucson. He and his crew were excavating footings for an addition in the Catalina Foothills last October when they came across a clutch of hatching Gila monster eggs about 3 feet beneath the surface. A lifelong outdoorsman and amateur naturalist, he immediately recognized them.

He called every herpetologist he could find. None of them believed him. Finally he contacted Roger Repp, a tool and die maker for the National Optical Astronomy Observatory and a rabid field herpetologist.

“For him, this was like Christmas, New Year’s and the birth of his first child all in one,” Pfander said. “It was a lot easier to find someone who knew how to take care of them. ... It was fun. We got a big charge out of it.”

Repp headed to the job site, collected the hatchlings, and brought them to ASU.

Excavation of the nest coincided with artificial incubation results, adding further credence to the study, which found for the first time proof of "overwintering" — hatching but remaining in the nest until conditions are ideal to emerge — by an animal other than an aquatic turtle. Pfander also got an acknowledgement in the Proceedings of the Royal Society BProceedings of the Royal Society is the parent title of two prestigious scientific journals published by the Royal Society. Originally a single journal, it was split into two separate journals in 1905. Series B publishes research related to biology., where the study was published in May.

Gila monsters lay their eggs right around the start of the monsoon in midsummer; the rains give the eggs some moisture so they’re more likely not to dessicate. Eggs hatch in about 120 days, in October, “a bad time to pop out if your food doesn’t come out until May or later,” said associate professor Dale DeNardo, co-author of the study with Karla Moeller, both of the School of Life Sciences.

So it's the best time of year for the eggs to hatch, but not the best time for the babies to come out. There’s a mismatch. How do they deal with it? The hatchlings just lay low and procrastinate.

“For us, it’s ‘Oh, I’ll do that tomorrow,’” DeNardo said. “Their tomorrow is six months. Lizards don’t care. They can wait: They hatch with good fat and energy reserves.”

If the hatchlings emerged from the nest in spring, quail and rabbits are breeding, but their eggs and kits are too big for a little Gila to eat. Their food appears in summer, when other lizards begin laying eggs. Hatchlings start to emerge in late spring through summer.

“That’s the beginning of the food they can eat,” DeNardo said. “There’s no reason to come out until there’s food.”

Gila monsters are the biggest lizard in North America because they can only feed for short periods of time, so they have to store a lot of energy. They can also store a lot of water — about a quarter of their weight. It’s the only vertebrate that specializes in eating nest contents in the desert.

The discovery of this particular nest, at this particular time, added real-world evidence to the researchers' laboratory findings about how Gila monster young behave and revealed a compelling trait about how the lizards survive.

“This isn’t about Gila monster’s eggs hatching,” DeNardo said. “This is about a phenomenon we think is unique to aquatic turtles."

It’s thought that turtles are the only animals which hatch and then spend the winter in the nest because it’s too harsh for them outside. But Gila monsters have the same pattern of overwintering.

"Here we have something that’s not a turtle, not aquatic, doesn’t live in cold environments, and it lives in a desert where winters are not that cold," DeNardo said. "Everything is different about this animal.

“It’s this weird combination of things because you’ve got to get out of the egg, but you can’t do what the adults do. But here you have a species that lives in an environment where it doesn’t get that cold in the winter, the adults don’t winter underwater. The embryos would do fine during the winter. It’s the first time documenting that another species other than these turtles with unique characteristics do this.”

In late May, Professor Nina Berman of the School of International Letters and Cultures, Professor Beth Blue Swadener of the School of Social Transformation and Lecturer Paul Quinn, director of the American Sign Language program in the College of Health Solutions, met with representatives of Kenyan universities to explore various areas of collaboration. Flora Farago, a PhD alumni from the T. Denny ...

In late May, Professor Nina Berman of the School of International Letters and Cultures, Professor Beth Blue Swadener of the School of Social Transformation and Lecturer Paul Quinn, director of the American Sign Language program in the College of Health Solutions, met with representatives of Kenyan universities to explore various areas of collaboration. Flora Farago, a PhD alumni from the T. Denny Sanford School of Social and Family Dynamics and assistant professor at Stephen F. Austin State University in Texas, also joined the group.

At Kenyatta University, the ASU team met with colleagues from early childhood education, special-needs education, engineering, international programs and collaborations, and the Office of Disability Services. Kenyatta University (KU) is a public research university just outside of Nairobi and is one of the top universities in Kenya, ranked second among all public and private universities in the country. 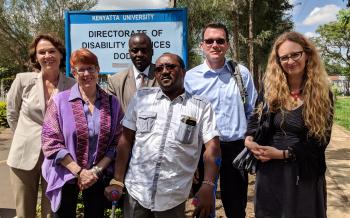 A team from ASU meeting with representatives from Kenyatta University. Download Full Image

The conversations on campus were followed by a visit to Joytown School for the Physically Disabled.

Swadener and Farago also had meetings at Moi University in Eldoret.

Quinn visited several primary schools for the deaf in the region, both residential and mainstreamed format. He also went to see vocational training sites for young adults who are deaf. During those visits, he identified a significant need for speech pathology services. This area promises great potential for collaborative efforts between the speech and hearing science academic program and Kenyatta University’s communication disorders department.

The goal of the visits was to establish collaboration agreements with ASU that create the framework for easier facilitation of faculty exchanges, student exchanges, joint research collaborations, and study abroad programs, among other activities.