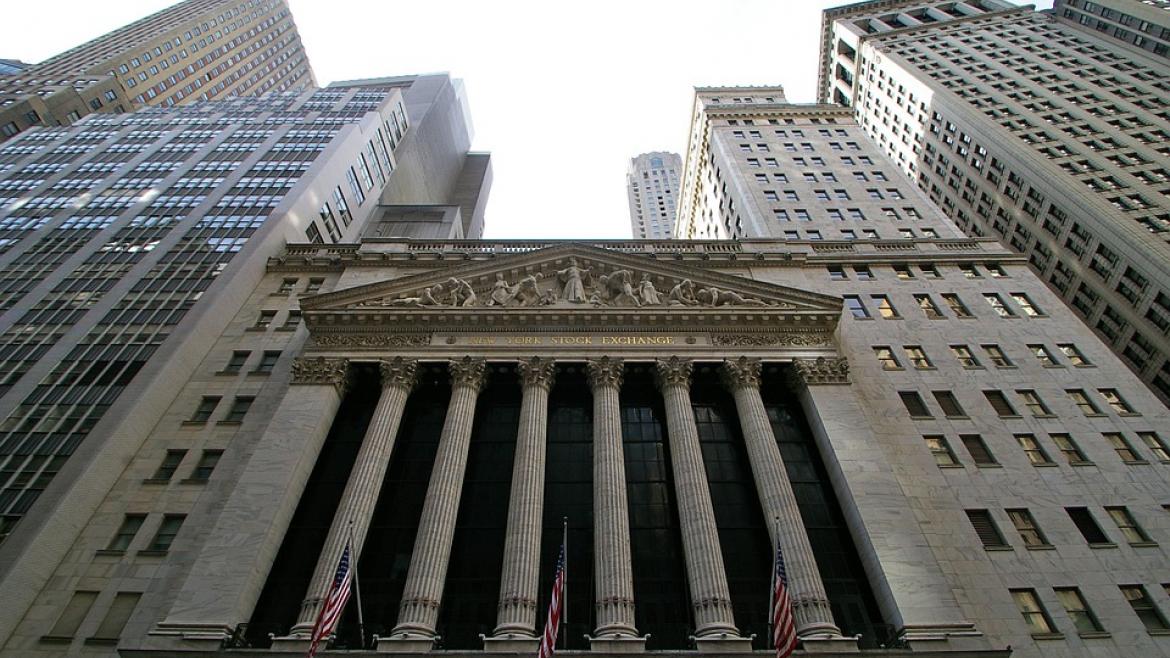 The Intercontinental Exchange, which owns the New York Stock Exchange, has been developing an online trading platform that will allow large investors to buy and hold bitcoin. The plan, along with commodity exchanges now offering bitcoin futures, signals a shift from the financial industry’s pervasive mistrust of cryptocurrencies to a cautious entry into mainstream adoption. 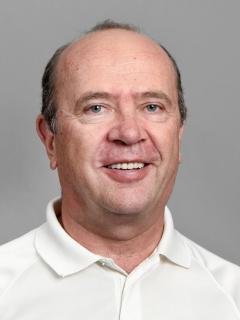 Question: After years of skepticism about cryptocurrencies, what is motivating the New York Stock Exchange to develop its own trading platform?

Answer: Cryptocurrencies, while relatively new, are about a decade old now — within the normal cycle for any new technology to gain some traction. What we have seen over the past few years is that original cryptocurrencies like bitcoin did produce some additional platforms and networks that do not necessarily have the same objective as currencies tied to a country or consortium of countries.

The industry now sees an opportunity to offer a new asset for trade, broadening choices for investors.

Q: What will bitcoin look like on the NYSE?

Why now? I think it’s because people are now more familiar with bitcoin.

Q: What does this mean for the consumer?

A: Consumers now will have another choice. In addition to investing in assets like gold or land, now they can invest in an intangible asset that has an accompanying proof of ownership. The vulnerability of a digital currency is based on demand, and it is not open to influence by additional supply. A government can bootstrap an economy by introducing a new supply of traditional currency to influence borrowing. That can’t happen with cryptocurrency.

Q: How would these transactions work?

A: In the same way you buy any commodity on the stock exchange, you will be able to buy digital currencies like bitcoin, Ethereum or Dash.

Q: Does bitcoin’s acceptance open the door to other cryptocurrencies?

A: Certainly. The trading or acceptance of bitcoin will open the door to other currencies. It’s a very positive development in the sense that it injects confidence into the marketplace. Institutional investors are recognizing this new asset as a valued investment opportunity; this will encourage individual investors. It will also encourage consumers and small shops to start trading in cryptocurrency.

Q: Why have institutions been so resistant to cryptocurrencies in the past?

A: I wouldn’t call it resistance but rather inertia and maybe time to understand how it works and what does it mean to any business or operation. I think self-preservation is natural behavior for both humans and institutional organizations and bodies.

It takes courage and curiosity to understand how this new thing would impact their business. It’s essentially doing business in a new way. When institutions saw the long-term value in doing business this way, they became much more embracing and started to adopt technology for optimizing their internal processes and making them more efficient to audit.

The acceptance of cryptocurrencies and the blockchain platforms on which they exist is evolutionary more than revolutionary.

Q: Does the NYSE give this some legitimacy for consumer confidence?

A: It’s an encouraging development. Consumers do develop confidence when they see a large institution such as the stock exchange backing and selling cryptocurrencies.

Q: Will cryptocurrency ever be commonplace?

A: I believe cryptocurrency will be one asset that will feed and provide fuel for a new economy. We will still continue to trade in gold, silver and platinum. It’s simply another trading asset.

In 2017, nearly 72,000 wildfires burned more than 10 million acres nationwide, according to the National Interagency Fire Center.It cost $2.4 billion to fight them.In Arizona last year, more than 2,300 wildfires scorched nearly 430,000 acres, and the prediction for fires this season is above average, the agency reported.An Arizona State University team has come up with a way to use artificial inte... 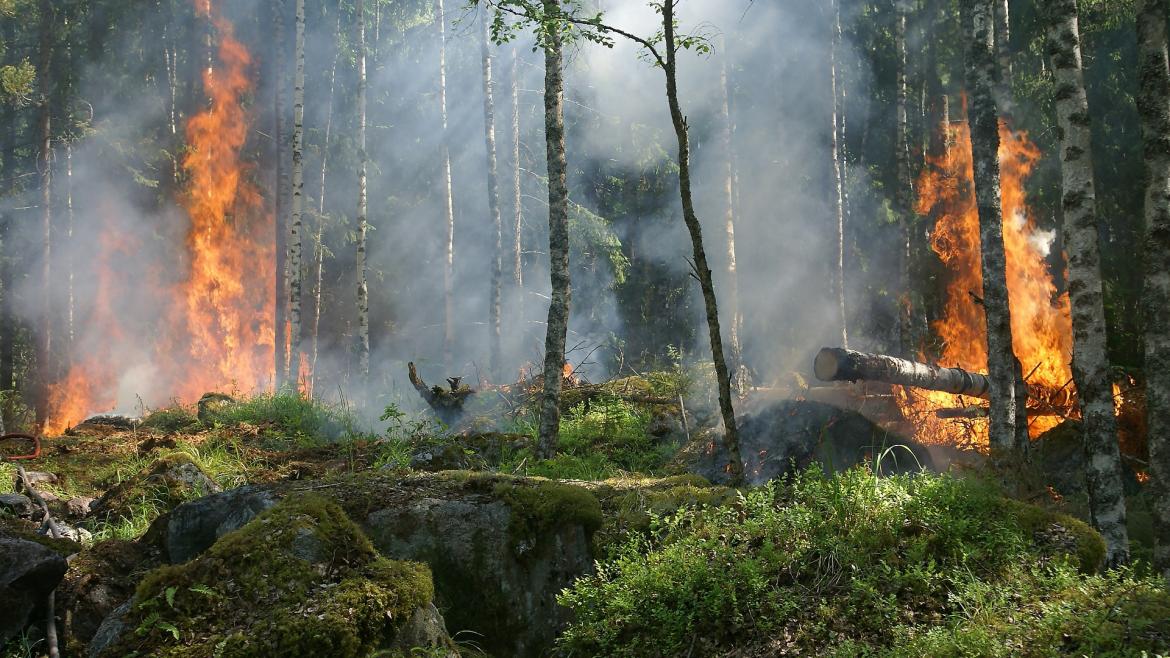 Students will compete for $100,000 prize in international Microsoft pitch this summer

In 2017, nearly 72,000 wildfires burned more than 10 million acres nationwide, according to the National Interagency Fire Center.

In Arizona last year, more than 2,300 wildfires scorched nearly 430,000 acres, and the prediction for fires this season is above average, the agency reported.

An Arizona State University team has come up with a way to use artificial intelligence to detect wildfires before they grow to catastrophic intensity, and the project has a shot at winning a $100,000 prize from Microsoft next month.

The project, called Prometheus, which came in fourth placeThe top three winning teams were from the University of California at Berkeley, Johns Hopkins and Harvard universities. in the national Microsoft Imagination Cup competitionThe Imagine Cup challenges students to create cloud-based solutions. in May, was created by three students: Murong He and Facundo Santiago, who both received master’s degrees in business analytics from the W. P. Carey School of Business last month, and David Azcona, a PhD student at Dublin City University who spent the last year at ASU on a Fulbright fellowship.

The three students invented a software program that analyzes data from a surveillance drone. The drone flies about 100 meters high, taking images of the ground and scrutinizing them to accurately pinpoint whether there’s an early-stage wildfire. If there is, the software sends the coordinates to a fast-response fire-fighting group.

“It’s very difficult to teach the computer to detect fire,” Santiago said. “Instead of writing an algorithm, we are submitting a lot of images — ‘This is a fire, this is a fire, this is not a fire.’ We’re pointing out, ‘The fire is here, so please learn it and come up with the rules to classify it correctly.’

“We are pushing the complexity of the logic needed to detect the image to the computer.” 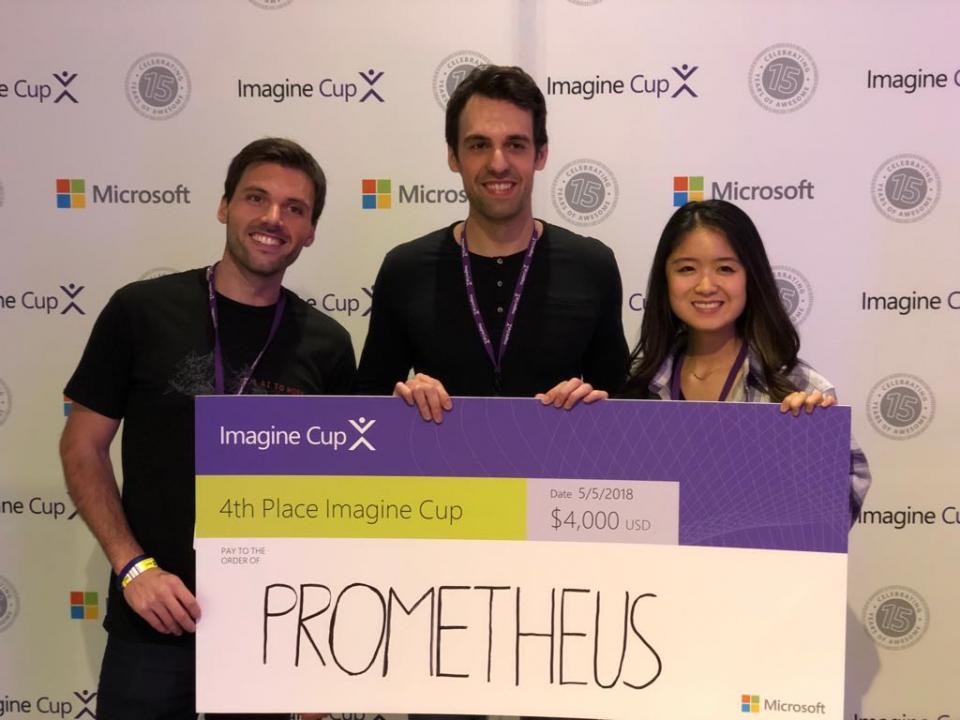 The ASU team that invented Prometheus came in fourth place in the national Imagine Cup competition in May. They are (from left) Facundo Santiago, David Azcona and Murong He. Santiago and He graduated with master's degrees in business analytics in May and Azcona is a PhD student at Dublin City University who has been at ASU for the past year on a Fulbright fellowship. Photo courtesy of Microsoft.

Current technology uses thermal-imaging devices on drones to find “hot spots” in remote areas, but that is less reliable in Arizona and other areas of the West where temperatures often exceed 100 degrees.

Experiencing a wildfire is terrifying, as He knows. She was living in San Diego last year when wildfires forced her family to flee their neighborhood.

“Thousands of people fled to evacuation sites like Qualcomm (now SDCCU) Stadium, and some of my classmates even lost their homes,” she said. “We stayed with a family friend and ended up being OK, but it was definitely a traumatic experience.

“When Santiago was telling us about his project using drones to detect soil quality, another series of California wildfires was on the news, so we thought it might be a good idea to apply the same technology in that setting.”

They had only a few days to pull Prometheus together, and then it came down to almost the last minute — their project was entered five minutes before the deadline, partly because the complicated software took so long to upload.

From the 4,000 projects submitted online, 12 were selected to pitch at the national competition in San Francisco in May. Two days before their presentation, the ASU team practiced with their drone at Golden Gate Park, using photographs of fires on the ground to stimulate the software to “detect” a fire, so they could show the judges.

During the pitch, Azcona flew the drone outside the windows on a patio for the judges to see.

Besides winning a spot in the international competition in July, the team won $4,000 for fourth place and a $1,000 prize for being the best artificial intelligence project.

Santiago said that the pitch audience was surprised to learn that nothing like Prometheus exists right now. 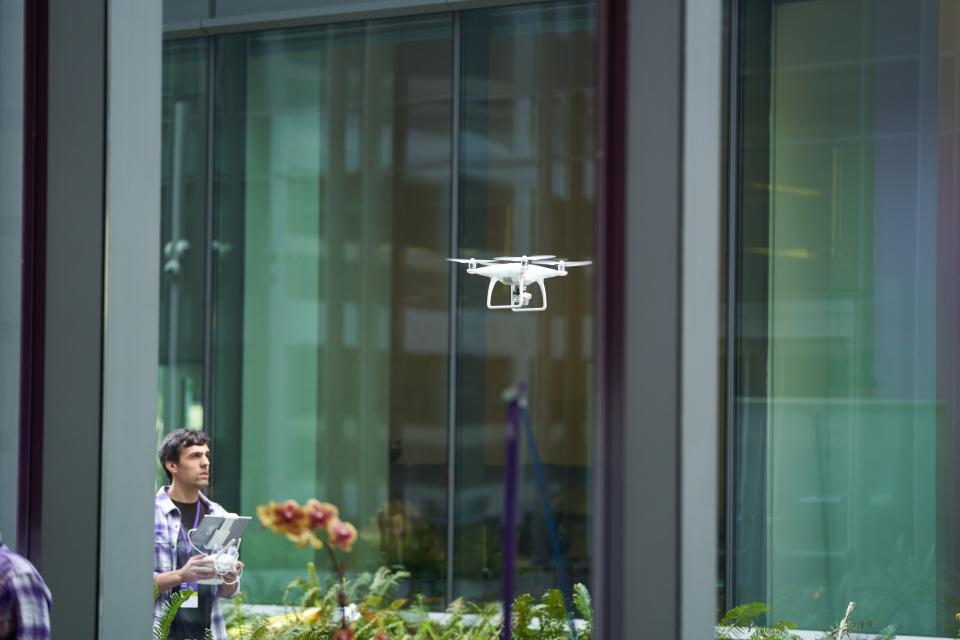 David Azcona flew the Prometheus drone outside the window during the team's pitch at the Imagine Cup competition in San Francisco in May. Photo by Microsoft.

“We said, ‘If you think there is some techie solution out there that is protecting these areas, there isn’t,'" Santiago said.

"NASA is using satellite images to map the whole world, but that will be five to 10 years down the line,” Azcona said. “That will be a real-time solution to map fires, but it’s super expensive.”

The most common method of detecting fires now is human observation, particularly in remote areas, where people stand in watch towers and scan the area using binoculars, Santiago said.

Thanks to feedback from firefighters, the team integrated “red-flag alerts” from the National Weather Service into the software. Those warnings flag areas with fire-conducive conditions such as high winds and low humidity, so the Prometheus drone can be deployed more strategically.

The drone they used cost about $1,000, Santiago said, and any drone with autopilot capability would work.

Ironically, the low-tech fire-detection method could eventually be used to make Prometheus more efficient. Currently, drones can only operate for about half an hour on battery power. But fire-fighting agencies could use the watchtowers as drone-charging stations, allowing the devices to operate remotely for longer periods.

The team members went their separate ways for a few weeks — Azcona has returned to Ireland, Santiago is leaving soon for his native Argentina and He is working as a data analyst for EdPlus, the unit at ASU that creates technology and includes ASU Online. But they will reunite in Seattle on July 22 for the international competition and a chance to win the grand prize.

The team hopes to sell Prometheus as a subscription service at some point, although it’s an open-source project, Santiago said.

“If you follow the instructions, anyone can grab the code and make it happen,” he said.