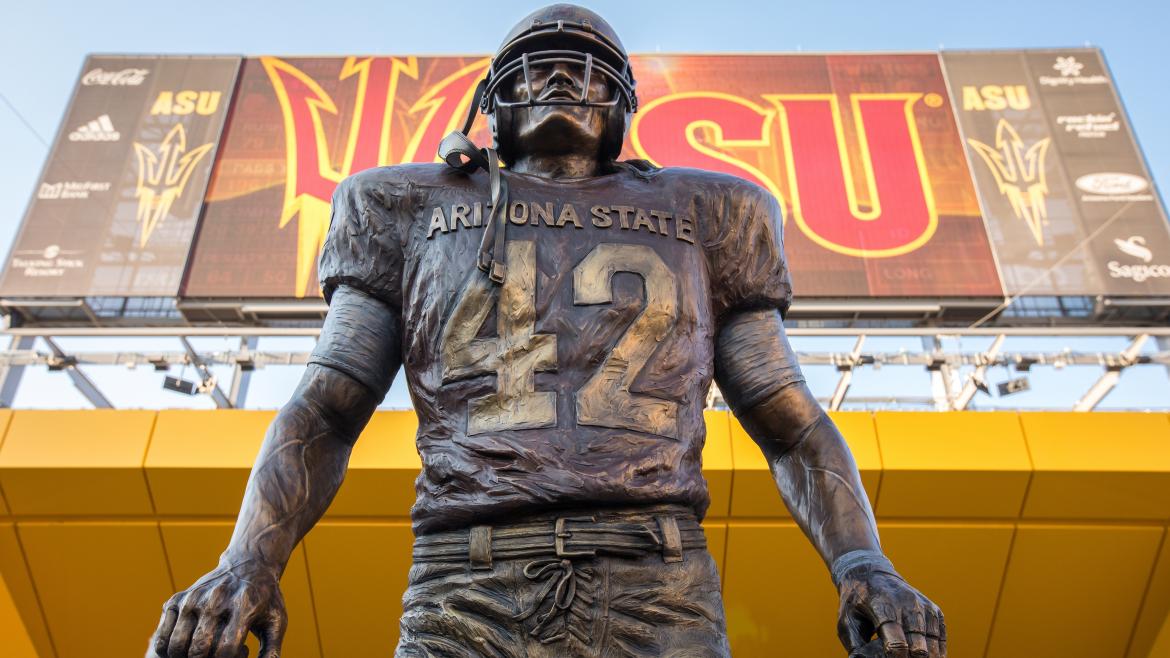 Two Arizona State University graduate student veterans who are passionate about making a positive impact in society have been named Tillman ScholarsFounded in 2008, the Tillman Scholars program supports the nation’s service members, veterans and military spouses by investing in education and professional development. The program provides academic scholarships, a national network and professional development opportunities, so Tillman Scholars are empowered to make an impact at home and around the world. To date, the Pat Tillman Foundation has invested more than $16 million in academic support, and named over 580 Tillman Scholars at over 100 academic institutions nationwide. for the Class of 2018, the Pat Tillman Foundation announced Wednesday.

Air Force veteran Lindsay Lorson and Arizona Army National Guard veteran Vivin Paliath are among an elite group of only 60 national recipients selected this year to the 10th Tillman Scholar class that collectively will receive over $1.3 million in scholarship funding.

On a mission to help the vulnerable 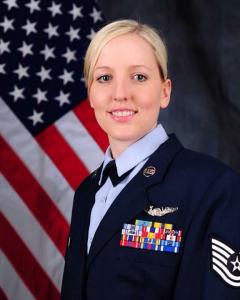 “I was honored, humbled and surprised,” Lorson said about her selection. “Pat Tillman’s legacy and his commitment to service and community, it’s legendary … it speaks to me.”

Lorson’s 13-year Air Force career sent her all over the world, including serving as a flight attendant on Air Force Two where she worked for Vice Presidents Dick Cheney and Joe Biden. It was through these travels and an Afghanistan deployment that the North Dakota native found her true calling: helping vulnerable people.

“That’s what really opened up my eyes to the extreme poverty in the world,” Lorson said. “Some things you just can’t turn away from or you just can’t get out of your head, the things that you see.”

Since then, Lorson, now an Air Force spouse stationed in Kentucky, has worked with vulnerable populations such as wounded veterans. She also spent time in Cambodia working with a humanitarian agency rescuing children.

“These are kids that were anywhere from 3 to 13 that were being sold by their parents, because their parents were so poor and they couldn’t provide for them,” Lorson said. “So they were being rescued from human trafficking situations and being brought to the center to be taught life skills.”

Lorson, a licensed social worker, is an ASU Online student pursing a second master’s degree in curriculum and instruction with an emphasis on applied behavior analysis from ASU’s Mary Lou Fulton Teachers College. She heard about the program through a Facebook military spouse network page for mental health professionals.

“Everybody spoke highly of Arizona State’s program, so I applied,” she said.

While she intends to continue combating human trafficking, her main goal now is to expand her current work with autistic children by providing full spectrum care, something that her new degree will cover.

“I just want to serve these vulnerable populations, kids, families, victims of human trafficking,” Lorson said. “I feel like I have a gift for it, and I don’t want to waste it. I’m honored to be named a Pat Tillman scholar and excited for what that brings.” 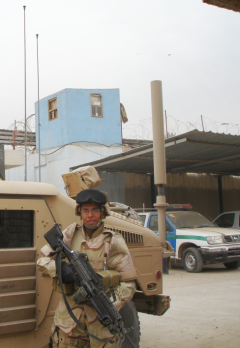 Former Arizona Army National Guard Soldier Vivin Paliath in Baghdad, Iraq, in 2006. Paliath is one of two ASU students selected as Tillman Scholars for the class of 2018.

An immigrant from India who grew up in Oman before his family moved to California in 1999, Vivin Paliath is also passionate about helping others.  But his path is by protecting computer networks, which are vulnerable to attack and yet pivotal to the functioning of just nearly all elements of modern society.

“That’s really relevant right now, with all the Russian hacking and they’re basically interfering all over the world,” said Paliath, a computer science PhD student with the Ira A. Fulton Schools of Engineering. “It’s a pretty big concern right now with what is happening. I feel like people really haven’t woken up to the threat yet.”

Having served as a logistics specialist in the Arizona Army National Guard, including a one-year combat tour in Baghdad, Paliath sees his future in cybersecurity as a continuation of his service to the nation but in a civilian capacity.

“It gives me an opportunity to kind of come back to what I was doing in the military,” said Paliath, who rose from junior software engineer to senior software architect during his 10 years with Chandler-based software company Infusionsoft. “Basically, protecting the country but at the same time leveraging my academic knowledge and my professional experience.”

In the near term, Paliath will be building up software for a cybersecurity and threat intelligence startup company. Eventually, he plans to research the application of artificial intelligence and machine learning.

“That’s kind of my long-term goal,” Paliath said. “At root I’m like an engineer, so I like to solve problems.”

Paliath pursued the Tillman Scholars Program after the Pat Tillman Veterans Center connected him with a former ASU recipient who suggested he apply after hearing his story. He successfully went through the multistage application process but didn’t have high expectations.

“When they told me I kind of didn’t believe it at first,” Paliath said.

Although he doesn’t necessarily crave recognition, Paliath admits that it feels good to occasionally see indications that he is doing something right.

“I’m really humbled by getting this award and really thankful for the opportunity,” he said. “I’m hoping I can live up to Pat Tillman’s legacy.”

Top photo: The Pat Tillman statue stands at the entrance of the new Tillman Tunnel on the north end of Sun Devil Stadium. Photo by Charlie Leight/ASU Now

Drug addiction is complex, and Arizona State University neuroscientist Foster Olive has spent his career working to unravel why and how the brain becomes addicted to drugs. The ASU Department of Psychology recently promoted Olive from associate professor to full professor because of his research efforts. A feel-good piece of the drug addiction puzzle Olive runs the Addiction Neuroscience Lab at AS...

Making a difference in the world

Drug addiction is complex, and Arizona State University neuroscientist Foster Olive has spent his career working to unravel why and how the brain becomes addicted to drugs.

The ASU Department of Psychology recently promoted Olive from associate professor to full professor because of his research efforts. 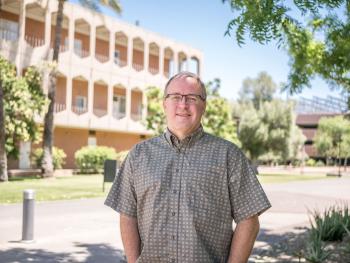 A feel-good piece of the drug addiction puzzle

Olive runs the Addiction Neuroscience Lab at ASU. His interest in drug addiction began when he was in graduate school at the University of California, Los Angeles. At UCLA, he spent some time working in a lab that studied how morphine affected endorphins in the brain, and he was fascinated by how endorphins might contribute to drug addiction.

“Endorphins do not receive as much attention as other neuromodulatory systems that are involved in drug addiction, like dopamine,” Olive said. “But, they play an important role in addiction and recovery.”

Endorphins are chemicals made by the nervous system that block pain and create good feelings. Exercise and laughter cause endorphins to be released, but opiate drugs like heroin also work on the same neuronal systems.

Olive recently received a five-year grant from the National Institutes of Health to study how alcohol activates the endorphin system in the brain. This particular NIH grant program was motivated by the finding that naltrexone, an endorphin-blocking drug that is well-known for its capability to reverse opiate overdoses, is also effective at treating alcoholism.

To test how alcohol affects the brain’s endorphin system, Olive and his team use special animals who have endorphin neurons that literally light up, or fluoresce, when the neurons become active. The researchers can measure how the endorphin system responds to alcohol. Currently, they are focusing on an area of the brain called the arcuate nucleus of the hypothalamus. The hypothalamus is a “clearing house” in the brain, and neurons in this area are involved in wide-ranging processes like control of body temperature, hunger, thirst sleep and emotions.

“Once we identify a region or circuit in the brain that is affected by alcohol, we can start to figure out how to dampen the effect of alcohol without interfering with other functions,” Olive said.

A social piece of the addiction puzzle

“Opiate addicts are known to isolate themselves, and strong relationships are known to be protective and helpful for recovery,” Olive said. “Social effects are only partially understood in addiction research but are a very important area.”

Olive and his graduate student Seven Tomek recently published a paper in Addiction Biology that examined how the opiate heroin affected prosocial behavior in an animal model. The study looked at what happened when animals were given a choice between sugar pellets and rescuing a trapped animal or between heroin and rescuing the trapped animal. The researchers found that the animals who received sugar pellets kept rescuing the trapped animals. The animals who received heroin completely stopped rescuing. This study could lead to a possible mechanism for dysfunctional social behavior in opiate addicts or to improved treatments for opiate addiction.

West to east, and back again

Olive’s path to Tempe started in California and went through South Carolina. After earning his doctorate at UCLA, Olive completed two postdoctoral fellowships: one at Stanford University and a second at the University of California, San Francisco. He worked for five years at the Medical University of South Carolina before moving back west. Olive joined the ASU Department of Psychology in 2010.

“Foster Olive is an extremely productive researcher of how drugs of abuse create dependence and addiction; his work is theoretically thoughtful and sophisticated, methodologically innovative, and highly influential in the field. Indeed, he is a leading scholar, nationally and internationally,” said Steven Neuberg, Foundation Professor of psychology and department chair. “He is also an excellent, dedicated teacher and mentor, and goes far beyond the call with his service to the discipline, the department and university, and the broader community. The Department of Psychology and ASU are significantly stronger because of Professor Olive.”