RFK remains an enigma 50 years after his death

ASU professor reflects on the life and legacy of Robert F. Kennedy on the 50th anniversary of his assassination

The figure of Robert F. Kennedy casts a long shadow, equally split between what was and what could have been.

That dichotomy doesn’t appear to have changed 50 years after Kennedy's life was cut short June 6, 1968, a day after being mortally wounded by an assassin’s gun.

Nicknamed Bobby, he was called the "runt" of the Kennedy clan, but he also was the most tenacious. He famously served under his brother President John F. Kennedy, first as campaign manager, then later as attorney general. After an assassin took John’s life on Nov. 22, 1963, Bobby attempted to restore the Kennedy name to the White House when he ran for president in 1968, but Bobby’s life was also cut short by a bullet. Jordanian national Sirhan Sirhan shot him in the kitchen of the Ambassador Hotel in Los Angeles. He was 42.

ASU Now consulted Keith D. Miller, an English professor and interim director of the Center for the Study of Race and Democracy, to discuss the life and legacy of Robert F. Kennedy on the 50th anniversary of his death. In his research, Miller mainly focuses on the rhetoric and songs of the civil rights movement. He said Robert F. Kennedy was often viewed as a stand-in for his brother, but was coming into his own at the end of his short life.

Question: Robert Kennedy doesn’t seem to enjoy the same legacy as his brother John Kennedy. But there still seems to be an air of mystery surrounding him 50 years after his death. Why is that?

Answer: It is possible to think that Robert Kennedy would have been elected president in 1968. If that were the case, no one knows what he would have accomplished. Therefore, he seems a mysterious figure.

Q: What kind of job did RFK do as attorney general from 1961–1964, and what were some highlights (and lowlights) of his tenure in office?

A: President John Kennedy sidelined Vice President Lyndon Johnson. President Kennedy selected his brother Robert Kennedy to serve not only as his attorney general, but also the de facto vice president. Even though foreign policy does not come under the purview of the attorney general, Robert Kennedy played an important role in resolving the Cuban Missile Crisis. Because he was the president's brother, everyone realized that he stood above every other member of the cabinet, and he was often viewed as a stand-in for his brother.

As attorney general, he told Martin Luther King Jr. to stop using children in nonviolent marches in Birmingham [Alabama] in spring 1963. Yet images of the police in Birmingham using fire hoses and police dogs on the children proved pivotal in gaining public sympathy for the struggle against segregation. President Kennedy did not offer an important civil rights proposal after the Freedom Rides of 1961 or after James Meredith integrated Ole Miss in 1962. He only did that after two years in the White House. He did that after nonviolent protests in Birmingham and after Birmingham spawned widespread, similar nonviolent demonstrations in the South — all of which triggered enormous sympathy for King in the North. Birmingham pushed President Kennedy off the fence on civil rights.

Robert Kennedy also approved of the request of J. Edgar Hoover, director of the FBI, to wiretap the telephones of Martin Luther King Jr. and his close advisers. Further, after John Kennedy was assassinated in November 1963, Robert Kennedy fell into a depression that lasted for months, during which time he did little work, even though he was still attorney general.

Q: RFK was assassinated in early June, several months before the 1968 presidential election in November. Given that Richard Nixon ultimately won that election by a large margin over Democrat Hubert Humphrey, do you think Kennedy would have defeated Nixon had he lived?

A: In 1968 the Democratic Party only held presidential primaries in 13 states, and Robert Kennedy only won four of those primaries. The delegates from the other states were chosen by party leaders and a party machinery that was largely controlled by President Lyndon Johnson and Vice President Hubert Humphrey, who was running against Kennedy. In a recent book, "LBJ'S 1968," Kyle Longley of ASU argues that Johnson seriously controlled the party and the convention in 1968. I personally think it is highly doubtful that Robert Kennedy, had he lived, could have won the Democratic nomination in 1968.

To complete the hypothetical exercise: Even if he were able to do that, it would have proven difficult for him to defeat Richard Nixon, the GOP nominee. Nixon edged Humphrey, in part by claiming that he had a "secret plan" to end the war in Vietnam. But, four years later, with the war raging on and no end in sight, Nixon won re-election with an avalanche of votes that buried George McGovern, the anti-war Democratic nominee. So it would not have been easy for the anti-war Kennedy to defeat Nixon in 1968.

Q: Given that he was never able to reach the White House, what is his legacy today?

A: Robert Kennedy did not initially come close to understanding the huge injustice of segregation and racism in the U.S. He also maintained a childish hatred of Lyndon Johnson, despite Johnson's ability to pass the most important civil rights bills ever — the Civil Rights Act, Voting Rights Act and Open Housing Act — plus Medicare, Head Start and the Immigration and Naturalization Act. Yet, like [Abraham] Lincoln, Robert Kennedy grew while in high office. He became sensitive to the plight of children in the Mississippi Delta who were literally starving. He also adopted the unpopular position of opposing the Vietnam War, which, ironically, was designed and orchestrated by President Kennedy's cabinet secretaries and advisers.

Robert Kennedy's ability to grow markedly in office contrasts with what happens to almost all other elected officials, who are too rigid, too timid, too defensive and too egotistical to broaden and deepen their understanding of the human race. I think his ability to blossom while in office is easily his most important legacy.

From Tempe to DC: ASU employee adjusts to life in nation’s capital

Arizona transplant Bianca C. Lucero enjoys her job at Arizona State University's new center in Washington, D.C., but has experienced some minor culture shock since she took the position in 2017. “I now have more coats than I’ve ever owned, I walk to work, and there are no breakfast burritos here, which should be a staple of life,” joked Lucero, the special events manager at the McCain I... 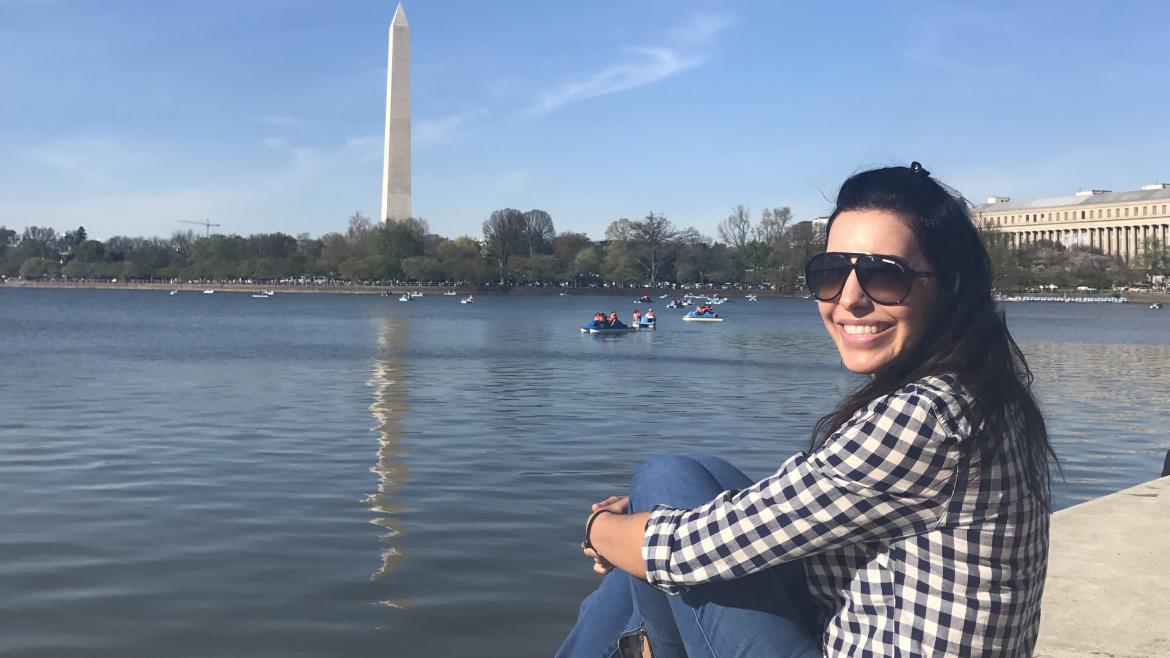 From Tempe to DC: ASU employee adjusts to life in nation’s capital

Arizona transplant Bianca C. Lucero enjoys her job at Arizona State University's new center in Washington, D.C., but has experienced some minor culture shock since she took the position in 2017.

“I now have more coats than I’ve ever owned, I walk to work, and there are no breakfast burritos here, which should be a staple of life,” joked Lucero, the special events manager at the McCain Institute for International Leadership in the nation’s capital. “Three things I miss most about Arizona are my family, Sun Devil football games and the Mexican food.”

Lucero’s longtime presence is greatly appreciated in the nation’s capital, where she has turned hospitality into an art form, according to her boss.

“Presentation is important. Receiving people in a respectful manner is important,” said Ambassador Michael C. Polt, professor of practice and senior director for the McCain Institute. “Setting up events so that they are memorable and stay in peoples’ minds after they have left this building is our goal. Bianca makes all of that happen. She’s an event superstar.”

And like many superstars, she is a trailblazer. Lucero is the eldest of three children, was the first of her siblings to attend college and was an inaugural member of ASU’s César E. Chávez Leadership Institute (CCLI). She was also the first college graduate from the program and later served on its advisory committee, as its chair, in 2015 and 2016.

The proud alumna and die-hard Sun Devil graduated in 1999 with a bachelor’s degree in communications. She also holds a master’s degree in nonprofit leadership and management. She worked as a community relations coordinator for ASU Public Events in the Office of Cultural Participation for six years. Her efforts enabled her to connect communities to innovative arts programs, world-class artists in residence and provide children and adults throughout the Valley access to cultural initiatives.

Later she was hired as director of events at ASU’s Barrett, The Honors College, where she served as a liaison on many campus-planning committees and ensured Barrett played an integral role in key ASU events, such as Fall Welcome, Family Weekend and Homecoming.

For her professional work and community contributions and for being an outstanding role model, she was chosen as a recipient of the Arizona Hispanic 40 Under 40 Award in 2013.

Lucero brings that prestige to the McCain Institute, which is housed in the 32,000-square-foot, eight-story Ambassador Barbara Barrett & Justice Sandra Day O’Connor Washington Center, just two blocks from the White House. In addition to the McCain Institute, the center also houses various ASU programs such as the Cronkite News Washington Bureau, Center on the Future of War, Consortium for Science, Policy and Outcomes, the Morrison Institute for Public Policy and the L. William Seidman Research Institute.

Her skills were highlighted in March when the institute held its grand opening reception amid the center’s public grand opening, which included a week of receptions, lectures and panel discussions.

“This spring was jam-packed with the move to the new building, the grand opening events and our regular programming and plenty of 13-hour days. I think I’m just recovering and defrosting,” Lucero said with a laugh.

She didn’t have much time to recover. In late April she helped organize The Sedona Forum, the McCain Institute’s annual, high-level gathering of national and international leaders held each spring at the Enchantment Resort in the red rock country of Sedona, Arizona. The three-day forum is invitation-only and this year included CIA Director Mike Pompeo; Secretary of Defense James Mattis, Arizona Gov. Doug Ducey, and a discussion between Cindy McCain and actor Ashton KutcherIn 2009, Kutcher co-founded what would go on to become Thorn, a nonprofit dedicated to leveraging technology for good: to stop the sale and abuse of children online., who spoke on their work to end human trafficking.

Even though Lucero remains nostalgic for home and still hasn’t gotten used to the East Coast’s cold weather, she said living in Washington D.C., certainly has its perks.

“I think I’ve finally adapted and embraced living in an urban city,” Lucero said. “D.C. offers plenty to do for both personal and professional development. It is a walkable city that’s easy to navigate. It also has great restaurants and many free cultural events. It offers up a lot of new opportunities that I’m eager to explore … but I’m still on the hunt for a really good Mexican food restaurant.”