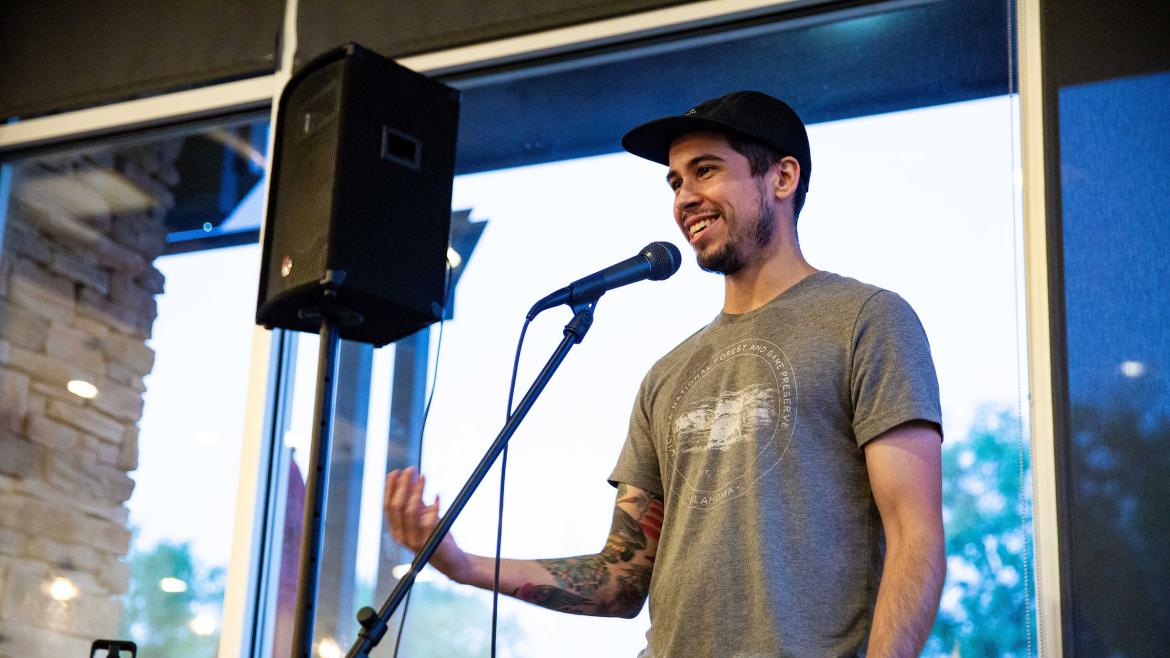 Getting a bunch of high school students to show up for a poetry reading on a Friday afternoon in the summer is quite a feat. Actually getting them excited about it is another level of accomplishment entirely. Peoria-based poet and Liberty High School English teacher Cody Wilson managed to do both.

Last week at Union Coffee in Peoria, a group of about 20 of his students settled into the bright, industrial-themed space to listen to each other, Wilson and others read their work. On June 4, the Arizona State University alumnus will be reading his work in public again, this time in celebration of the release of his first book of poetry, “Nobody is Ever Missing,” at 6:30 p.m. at Crescent Ballroom in Phoenix.

The book release is being hosted by up-and-coming local publisher Tolsun Books in partnership with ASU’s Virginia G. Piper Center for Creative Writing. The collaboration is a testament to the center’s recommitment to community impact through the ramping up of several outreach initiatives that include classes, readings and events that celebrate and support local writers.

“In some respects, it’s a natural evolution of Piper’s history here in the community,” said Jacob Friedman, Piper Center communications specialist. “For a long time Piper has provided an array of programs and services to writers.”

But when Alberto Rios, ASU Regents' Professor of English and Arizona’s inaugural poet laureate, came on as director in August 2017, he encouraged staff at the center to think even harder about how it could “operate with a bias toward meaning.”

Friedman calls Rios “a poet of the community” because of his long history of engaging Valley residents in his work, as he did last May with students at Dunbar Elementary on a public art project that turned sights into sound in celebration of South Phoenix. He says Rios challenged him and his Piper colleagues to be more mindful about how they could get the most out of their resources while creating the greatest good and having the largest impact.

For the past 15 years, the Piper Center has hosted an annual conference, Desert Nights, Rising Stars, and each year, it awards scholarships to students of Maricopa community colleges and local educators to attend. This year, Wilson was chosen as the recipient of the Arizona Educator Scholarship.

“[The conference] was awesome,” Wilson said. “There’s a level of approachability in what the Piper Center offers, and I really appreciate all of the different opportunities — I got to meet local writers as well as established writers.”

At 27 years old, with an armful of tattoos and a laid-back personality emphasized by his casual T-shirt-and-jeans approach to fashion, Wilson doesn’t fit the mold of a typical high school teacher — and his students love him for it. 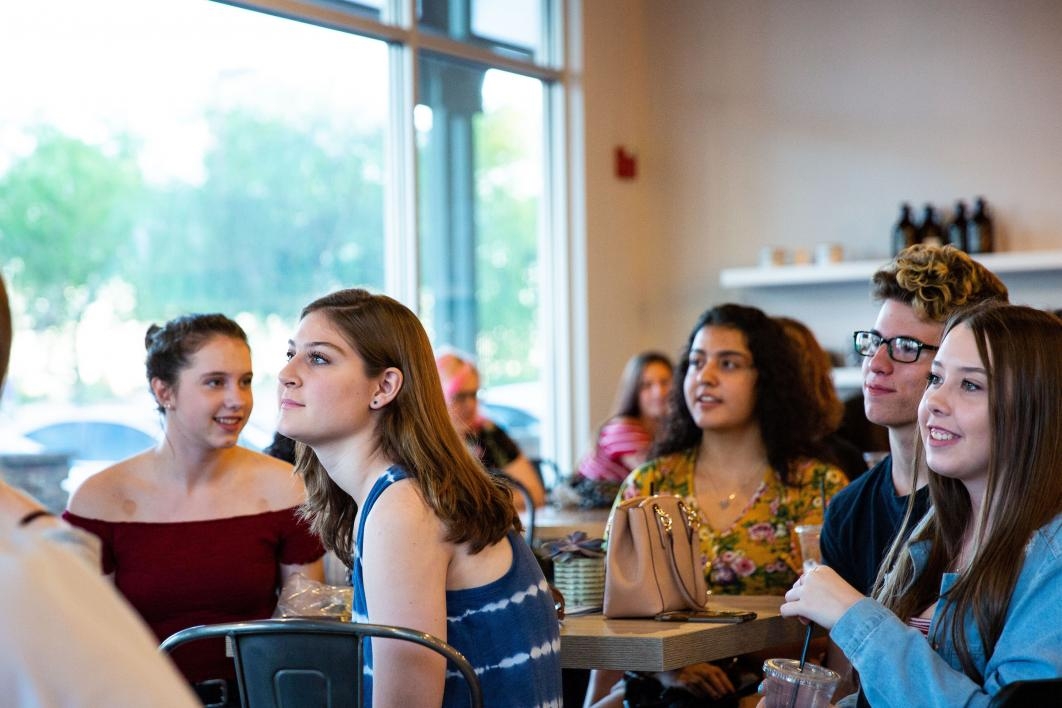 Liberty High School students listen to a poetry reading at Union Coffee in Peoria, Arizona, on May 25. ASU alumnus and Liberty High School teacher Cody Wilson, along with Tolsun Books publishers David and Brandi Pischke, organized the event for the students and the West Valley community. ASU creative writing and astrobiology junior Megan Bromley reads her work to the audience during a poetry reading at Union Coffee on May 25. 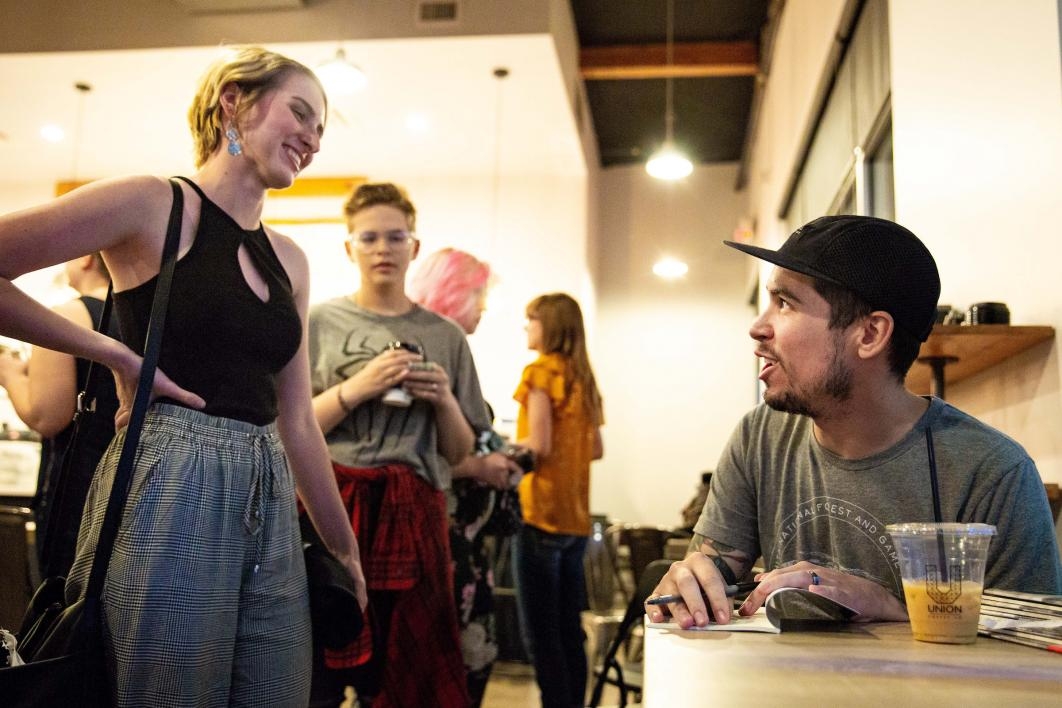 ASU alumnus and Liberty High School English teacher Cody Wilson greets friends and students as he signs his newly published book “Nobody is Ever Missing," during a poetry reading at Union Coffee on May 25.

“He finds this way of connecting with his students that is so important, and the way he talks about poetry and life in general, I feel like it’s very important for a young, impressionable mind, especially in a high school setting,” said Manny Timm, a recent Liberty High School graduate.

The decision to award the Piper scholarship to Wilson was “not simply an investment in an individual writer but somebody who’s going to take that value and bring it back to their community,” Friedman said.

The way in which Wilson was able to do that was on full display at Union Coffee last week, where Megan Bromley, an ASU senior and former student of Wilson’s, joined the festivities. A creative writing and astrobiology double major, Bromley read a poem she’d written to the asteroid Psyche. (ASU is leading a NASA mission to visit the all-metal space object.)

“As somebody who studies STEM and the arts, I think that there are skills in both that are really vital in leading a life that is fulfilling on multiple fronts,” Bromley said.

And as someone who was educated in the Peoria school district, then went on to ASU and is still active in the community’s literary scene, Bromley mirrors the trajectory of her former teacher in a way that Friedman hopes the Piper Center can continue to facilitate.

“These individuals are on a continuum.” Friedman said, “These are the future visiting writers.”

Tolsun Books founders David and Brandi Pischke, both local teachers, were also on hand at Union Coffee. The pair launched the small press in March of this year to address what they saw as a lacking literary scene in the Phoenix area, and it already has an impressive roster of authors and publications.

“There are some really talented people who are here and have something to say and have a unique voice, and this is a unique place,” Brandi Pischke said. “So we thought it would be a great idea to bring a publication here and feature some amazing local artists like Cody.”

But they weren’t expecting it to grow so quickly.

Friedman knows from personal experience, as the founder and editor-in-chief of the independent literary magazine Four Chambers, which recently went on an indefinite hiatus, just how “hard and draining” it can be. So, acting on behalf of Piper Center, he offered to partner with Tolsun Books to help promote and co-host Wilson’s upcoming book release.

“I think these grass-roots organizations are really the lifeblood and the heart of the literary community here in Phoenix,” Friedman said.

However, he added, such small organizations “cannot accomplish their goals without structure and support from a larger institution. … As a larger institution, Piper can serve that role, of not just being presenters of content but supporting writers working in the Valley, providing them with professional development opportunities … mentorships [and more]. We are not here to be in the spotlight — we are here to shine a light on others and increase the value of what they’re already doing.”

Bringing distinguished authors to ASU is important, Friedman said, “but it’s also important for us to be presenting individuals who might only have a few books out. Cody Wilson’s event is really the strongest example of this, where we want to be able to serve the larger community here in Phoenix.”

Another example is how the center is working to expand the Desert Nights, Rising Stars conference to be more inclusive to those outside of ASU, by making it more affordable and flexible for people’s schedules. For the first time next year, it will feature a free exhibitors' fair, where 30–40 local writers and community organizations will showcase their work and wares.

This fall, the center is partnering with Phoenix’s Open Air Market for a day of literary programming, as well as downtown Phoenix’s cinephile haven FilmBar to present eight films inspired by poetry. A fresh schedule of classes will also be announced soon, as will projects with Rios and the ASU creative writing student-helmed literary journal Hayden’s Ferry Review.

“Piper is a nationally recognized literary institution, but I think it’s important to maintain a focus on the local community and creating networks and points of exchange there,” Friedman said.

“There are all these places with really well-established traditions of culture and arts, but I think Phoenix is in a different place for a few reasons — because of its political climate, because of its history, in terms of its newness and ongoing development … So I think creating arts and cultural programming and educational opportunities is not just a luxury … it’s actually a step towards having a more socially conscious and responsible community as a whole.”

Top photo: ASU alumnus and Liberty High School English teacher Cody Wilson reads from his newly published book, “Nobody is Ever Missing," during a poetry reading at Union Coffee in Peoria, Arizona, on May 25. Photo by Deanna Dent/ASU Now