Student speech is having a moment on the national stage.

Since the tragic shooting at Marjory Stoneman Douglas High School on Feb. 14, student survivors have emerged as powerful voices, earning accolades for their composure and well-articulated arguments. 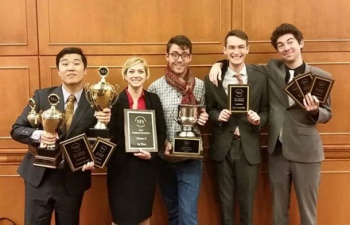 Some say what we are hearing from the students of Parkland, Florida, and their contemporaries across the country is what happens when classroom passion and parlance get real-world practice.

“Speech and debate, also known as forensics, sharpen students’ ability to think and listen critically, and articulate their thoughts confidently and persuasively,” said Adam Symonds, director of the Arizona State University Forensics Team. “Many high schools across the country have taken on the issue of gun control in their speech and debate classes. These teams research state laws, brainstorm arguments for and against universal background checks, and write speeches.”

Symonds says speech and debate prepare students to think on their feet and respond quickly to opposing viewpoints. He notes that participation in speech and debate tournaments requires students figure out how to advocate for something they believe. Through the process of research, they learn what their opponents are saying about a topic and think about counter-arguments.

As an undergraduate student at ASU, Jodi Preudhomme, now Title IX coordinator and special counsel at the university, was a member of the Forensics Team for three years. She credits her experience on the team for honing her skills in the art of debate.

“Speech and debate is an excellent way of improving speaking skills and is particularly helpful in providing experience in developing a convincing argument,” said Preudhomme. “When you are in debate rounds, you are sometimes forced to argue against your natural point of view, and you realize that arguments, like coins, always have at least two sides. Debating builds confidence in your ability to engage with individuals on all sides of a topic regardless of what your personal opinion is on the topic.”

Linda Lederman, director and professor at the Hugh Downs School of Human Communication, at ASU agrees.

“All students can benefit from participating in speech and debate,” said Lederman. “In fact, employers look specifically for the skills taught, such as critical thinking, communication, collaboration and creativity.”

“I help students deconstruct their text and critically analyze their meanings and then assist in the process of the physical performance,” said Tyler Rife, a graduate teaching associate who coaches at Phoenix Country Day School in Paradise Valley. “I make sure the work is logical and coherent, as well as emotionally impactful. We want to showcase confidence in their performance and argument.’”

Michael Tristano, also a graduate teaching associate and coach, has been involved with speech and debate for more than 13 years.

“My role as a coach is never focused on trophies,” he said. “I teach students that the greatest accolade they can receive in this activity is having someone listen to their story and their truth.”

Tristano says all of the skills students need to become change-makers — including argumentation development, political awareness, style, confidence, hope, determination, advocacy and a hard work ethic — are learned through speech and debate.

Each January, more than 1,600 high school students from around the country compete in ASU's Hugh Downs School of Human Communication Invitational Speech and Debate Tournament in Tempe, the largest tournament in Arizona. Representing more than 125 schools in 19 states, the students are members of the National Speech & Debate Association, formerly the National Forensic League.

For more information about speech and debate at ASU log on to https://humancommunication.clas.asu.edu/student-life/forensics

In August 2012, 81-year-old Cecilia Giménez put broad brushstrokes to a decades-old fresco and became an overnight sensation — for all the wrong reasons.Giménez, an untrained amateur in the world of art, created an uproar in the small Spanish town of Borja when she took it upon herself to “fix” Elías García Martínez’s peeling painting of Jesus crowned in thorns, “Ecce Homo” (“Be... In August 2012, 81-year-old Cecilia Giménez put broad brushstrokes to a decades-old fresco and became an overnight sensation — for all the wrong reasons.

Giménez, an untrained amateur in the world of art, created an uproar in the small Spanish town of Borja when she took it upon herself to “fix” Elías García Martínez’s peeling painting of Jesus crowned in thorns, “Ecce Homo” (“Behold the Man”), on the wall of her local church. The result was a botched restoration that attracted global attention — and much parody, including the renaming of García Martínez’s fresco to “ecce mono” (“behold the monkey”).

Giménez and the fallout over her “restoration” is the theme of the semi-staged workshop premiere of “Behold The Man: La Ópera del Ecce Homo” by Arizona State University's Music Theatre and Opera this weekend.

A comic opera by composer Paul Fowler and librettist Andrew Flack, the piece is described as “a poignant comedy about how a disaster morphed into a miracle, and how the virtual world can impact the lives of ordinary people in powerful ways.”

Brian DeMaris, associate professor and director of the Music Theatre and Opera through ASU’s School of Music in the Herberger Institute for Design and the Arts, says the story aligns with his penchant for producing new operas for the program.

“Paul Fowler and Andrew Flack have created a piece that is both comic and serious at the same time, similar to Mozart and DaPonte,” DeMaris said. “Opera is a genre where stories can be told with a varied tone. It works beautifully to put Cecilia’s and Borja’s story in a larger perspective in that way. There is a certain calling I feel in producing new operas similar to how Cecilia felt called to restore the painting.”

The lyrical piece, which will be staged in English in the format of a development workshop or reading (no elaborate set, lights or costumes), will give its creators a chance to hear it with an orchestra for the first time, laying the foundation for a full-scale world premiere production, tentatively scheduled for Spain’s Zaragoza province in the fall of 2019.

Flack says he is grateful to have ASU’s involvement in his opera. His collaboration with ASU began through talks with DeMaris in March 2017.

“This is such a big deal that we’re here,” said the Denver-based librettist. “To launch something like this, to have the university invite us to come to do this — it’s an undertaking, but they were still able to bring the students together at the end of the academic year to make this happen. It’s a gift.”

The Music Theatre and Opera program at ASU seeks out pieces that are at varying stages on their journey as complete works, according to DeMaris. He says Flack and Fowler’s “Behold The Man” was ripe for an orchestral workshop/reading with his students.

“I was drawn to the reverent and truthful way that Andrew Flack approached this, getting to know Cecilia first and the town and people of Borja, treating the work as the comic source that it became but also with respect,” said DeMaris. “There are also not enough Spanish-language operas, and though we're doing the workshop in the English version, it is good for ASU to be involved in the creation of a new work in Spanish.”

DeMaris says comedy also played into his decision to bring “Behold The Man” to ASU, noting that this one takes a departure from many new operas, which have been mostly serious.

“I am drawn to the comic as well as the very current aspects of this story — especially as it is a story that is known through its internet sensation,” he said. “The opera plays on that very beautifully — the internet is silly but it is also very real, and portrayals through social media affect people in powerful ways.”

Fowler, who drew on Spanish pop music and many other musical influences in composing the piece, says their goal with the opera was to bring people together to help enrich community life.

“I’m interested in bringing music and theater back to the community from where it’s from, and this is a great example,” Fowler said. “We didn’t write this piece for the superstars of the world. We wrote it for communities that are reaching to that and communities that can perform for themselves.”

Giménez’s botched restoration of “Ecce Homo” has become the subject of a number of documentaries in recent years and has been satirized on NBC’s sketch comedy series “Saturday Night Live.” It continues to draw tourists to its home at the Santuario de Misericordia (Sanctuary of Mercy) Church in Borja, and despite the initial outrage over Giménez’s unsolicited undertaking of the fresco restoration, Flack says many have come to forgive her — a theme that also runs throughout “Behold The Man.” He calls the opera a story about faith and forgiveness.