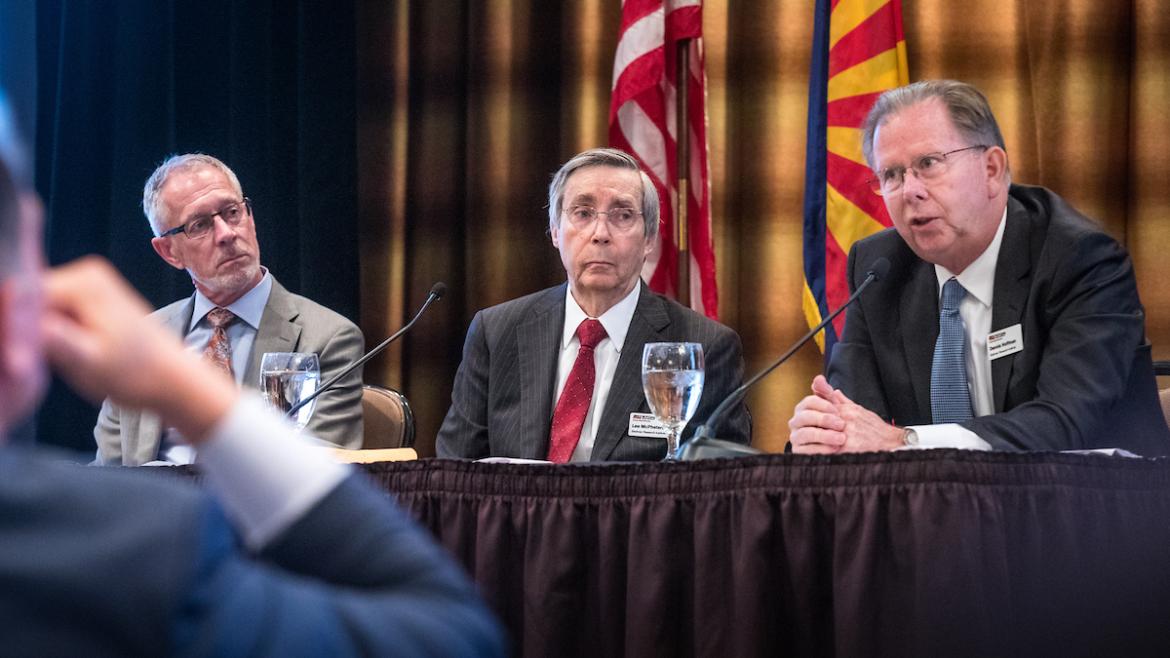 An Arizona State University economist said the Grand Canyon State is riding the crest of an eight-year prosperity wave, firmly establishing Arizona as a top 10 state for job creation and population growth. With that in mind, analysts are expecting smooth sailing ahead in the next couple of years.

Lee McPheters presented the "rosy" forecast for Arizona at the annual Economic Club Luncheon on Thursday, sponsored by the W. P. Carey School of Business at ASU and the Economic Club of Phoenix.

“The economy is strong, stable and we’re optimistic about the next couple of years — at least,” said McPheters, research professor of economics in the W. P. Carey School of Business and director of the JPMorgan Chase Economic Outlook Center. ”I think it’s fair to say there’s no recession in sight for the U.S. economy, and Arizona is going to follow that business cycle. So you can say, no recession in sight for the Arizona economy, either.”

Ten years ago, Arizona was in the grip of recession and the state’s economy was among the five weakest in the nation. That’s all changed according to McPheters. Now, Arizona is top 5 for job creation, and indicators such as personal income, new jobs, population growth and housing permits have analysts breathing easy for a while.

McPheters said the state’s economy is in a 90-month growth expansion, which started in September 2010. He said the Trump administration has not slowed down Arizona’s robust economy and indicated it continues to thrive under his presidency.

Health care, construction, finance and food service are strong industries in Arizona, McPheters said. But the biggest driver of the state’s economy are the 73,650 new residents who come from other states to Maricopa County every year, helping to make Arizona the fifth-fastest growing state in the country. These new residents bring with them higher income and education levels, and expectation of a higher quality of life, McPheters said.

He said Arizona employs approximately 2.8 million people, which surpasses its previous peak of 2.6 million in October 2007, right before the Great Recession hit. He added that 92 percent of Arizona’s job growth occurs in the metro Phoenix area.

“It’s all happening in Phoenix and businesses want to move here,” said McPheters, who predicts 3 percent job growth in the state for next year.

McPheters countered that the state is lacking in a few categories. He said Arizona has a high level of poverty and infrastructure needs such as roads and water as a result of population growth. He said the state also needs to improve its tax base and increase its education funding. Keith Moore, executive managing director of Aon Benfield, and more than 200 other people listen to the upbeat projections at the annual Economic Outlook luncheon, put on by the Economic Club of Phoenix, Thursday, May 3, at The Scottsdale Resort at McCormick Ranch. The three speakers forecast continued growth in most sectors of the economy in Maricopa County. Photo by Charlie Leight/ASU Now

However, he said there’s a whiff of inflation in the air, but indicated “it’s not going to be like it was in the 1970s.”

“Wage inflation has to be around the corner over the next couple of years,” said Hoffman, who said that it takes longer to fill a job because of competition. “It means we’re probably not paying enough.”

Hoffman said long-term issues the country must address in future are debt and entitlements, which require hard choices that no one has yet to tackle. He also believes climate change will pose challenges, especially in the western United States. One of his biggest concerns is a trade war and said it could result in significant capital investments from foreign countries.

“I do think it’s misguided to focus on trade deficit. I think it’s a bad metric,” Hoffman said. “We consume more than we produce in this country. … I think any attempt to eliminate it with tariffs would be counterproductive.”

Hoffman said the gross domestic product is on a growth trajectory in the next few years, and so is job creation.

“This is a really rosy forecast, but I certainly think it’s a consensus forecast,” Hoffman said. “Risks? Sure, they’re abundant. We could get hit from any number of things … but opportunities are abundant.”

Arizona’s real estate market is "doing really well but it isn’t fabulous yet,” according to Mark Stapp, the Fred E. Taylor Professor in Real Estate and director of the master real estate development program at the W. P. Carey School of Business.

He cited that land supply is tight, the industrial market is bright and retail “is really weird.”

“A lot of the (retail) space is obsolete and people are going for quality,” Stapp said. “They want to see quality spaces and have great experiences.” He added the home building market is booming and but said builders are lagging on supply.

“The problem is we can’t get them out of the ground fast enough,” Stapp said.

He believes the addition to the Loop 202 South Mountain Freeway, which will add 22 miles to Phoenix’s transportation system and is more than a third complete, will bolster much of the city’s real estate needs.

“I look for it to have a very big impact,” Stapp said.

Top photo: Mark Stapp, left, and Lee McPheters listen as Dennis Hoffman, right, addresses a question at the annual Economic Outlook Luncheon, put on by the Economic Club of Phoenix on Thursday, May 3, 2018, at The Scottsdale Resort at McCormick Ranch. Photo by Charlie Leight/ASU Now

Sun Devil Athletics will host numerous teams, games, matches, meets and events in 2018-19 at all of our facilities. Here is a month-by-month listing of all them. ... Sun Devil Athletics will host numerous teams, games, matches, meets and events in 2018-19 at all of our facilities. Here is a month-by-month listing of all them.