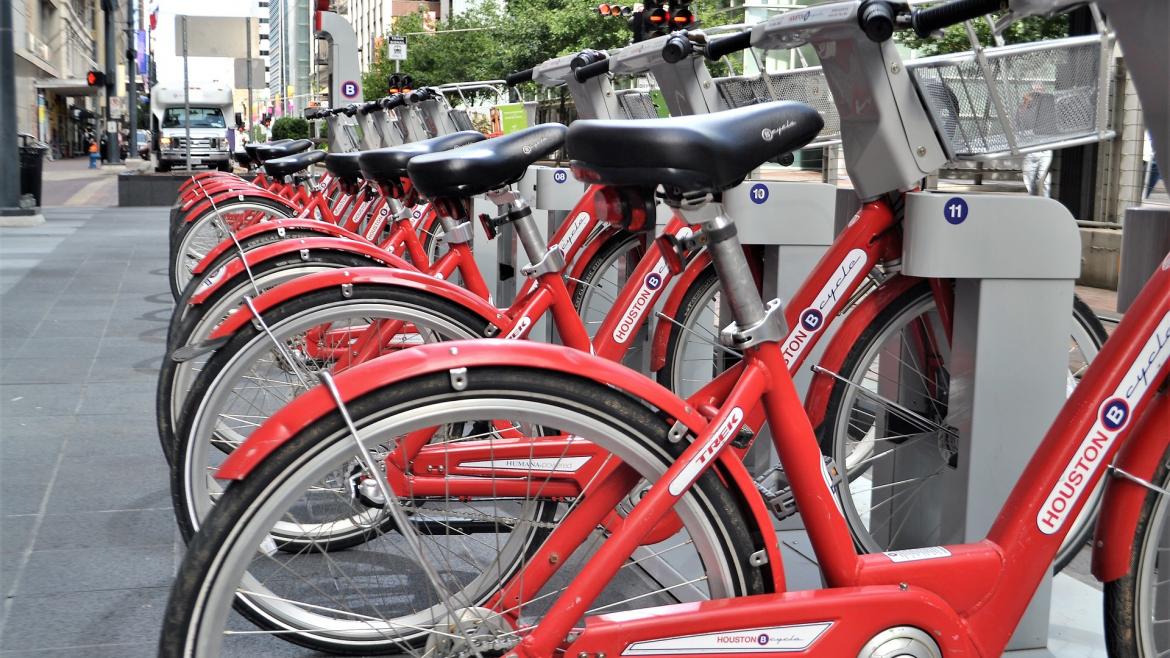 ASU doctoral student finds the data she needed thanks to global partnership.
April 30, 2018

Lindsey Conrow had hit an obstacle in her doctoral research at Arizona State University when the new PLuS Alliance initiative cleared the way for her to move forward.

Conrow was able to complete her PhD in geography from the School of Geographical Sciences and Urban Planning thanks to ASU’s partnership with UNSW Sydney in Australia and King’s College London.

“I was interested in pursuing spatial analytics, the math side of geography,” she said, especially data about bicycling, one of her passions. But she was finding it impossible to acquire data she could analyze. There are several phone apps that record users’ bike rides, but those companies charge tens of thousands of dollars for the data sets.

After the PLuS Alliance research collaboration launched in early 2016, Conrow’s adviser, Elizabeth Wentz, professor in the School of Geographical Sciences and Urban Planning, discovered that a team at UNSW Sydney had a set of data about bicycling that needed to be formatted. 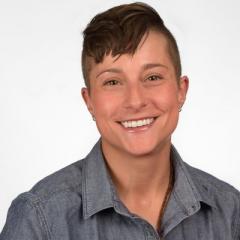 Lindsey Conrow, who is graduating with her doctoral degree, is the first graduate whose work was advanced through the PLuS Alliance.

That opened the door for Conrow, who completed her dissertation and is graduating May 7.

“Finally these are the data I needed to answer the questions I had about how people bike around urban areas,” said Conrow, who spent 10 weeks in Sydney, Australia, in the summer of 2016 getting the data set ready for analysis. The information came from an app used locally.

“When they go for a ride, they record it and it creates a GPS trace, tracking how fast, where they’re going and the purpose of the ride, whether it’s for commuting or recreation,” she said.

The regional transportation agency had purchased the data from the app company and allowed UNSW Sydney to access it.

“My research had kind of stagnated because of the lack of data, but when I got access to it in Australia, that’s what really pushed it to the next level,” Conrow said.

Wentz said she was interested in how the new partnership would work.

“I was keen to partner with the researchers at UNSW Sydney, and I knew I couldn’t spend a lot of time there and I felt that if Lindsey could spend a substantial amount of time there, she would be much more engaged in the research process,” said Wentz, who also is dean of social sciences in the College of Liberal Arts and Sciences.

“I told her to come back with a dissertation topic and she did.”

After she returned, Conrow worked on the three journal articles that make up her dissertation, one of which has already been published in Applied Geography. Two of the studies analyze the app data from Sydney, while the third looks at bicycling data in Tempe.

“We were looking at whether bicycle infrastructure is related to housing prices,” she said. “Some people argue that if you have bicycle lanes in your neighborhood, it could reduce your home value.

“The main finding was that homes in an area with dense bicycle infrastructure tend to be higher-valued homes,” she said, cautioning that the result doesn’t mean that adding a bike lane will increase the value of a home. She said the higher value was probably related to factors such as low traffic, low speed limit and shade trees, which encourage higher ridership.

A first-generation college student, Conrow has spent five years at ASU working on her doctorate and this summer, she’ll move to Zurich for a two-year fellowship studying mobility issues among an aging population. She’d like to eventually become a tenure-track professor studying urban transportation.

“Biking, walking, light rail, cars — all of these thing work together to make sure we can get around. But not everybody has the same access, so if we could work on transportation equity that would be great,” she said.

“And we need to work on infrastructure to get people out of their cars and biking and walking.”

Conrow was able to accelerate her work through the PLuS Alliance, and later this year, the partnership will offer a more formal way to advance global researchers. Next fall, the PLuS Alliance will launch a pilot program for PLuS International Interdisciplinary Researchers (PIIR). Ten researchers, either doctoral candidates or within five years post-doctoral, from each of the three universities will take a yearlong course that will include online content and workshops in London and Sydney. The researchers will be trained in the skills needed for global transdisciplinary work, and they’ll focus on the areas of sustainability, technology, social justice and global health.

ASU's newest specialties in the spotlight as more than 15,000 receive degrees at spring commencement

An earthquake has hit the southern coast of Majorca in the Mediterranean, causing a tsunami. Survivors are scattered around the Bay of Palma, setting signal fires.Drone teams have been tasked with searching the northwest coast for an unknown number of survivors. When spotted, they are to notify search-and-rescue teams of locations and numbers of people. They’ve each been given a two- to three-ki... 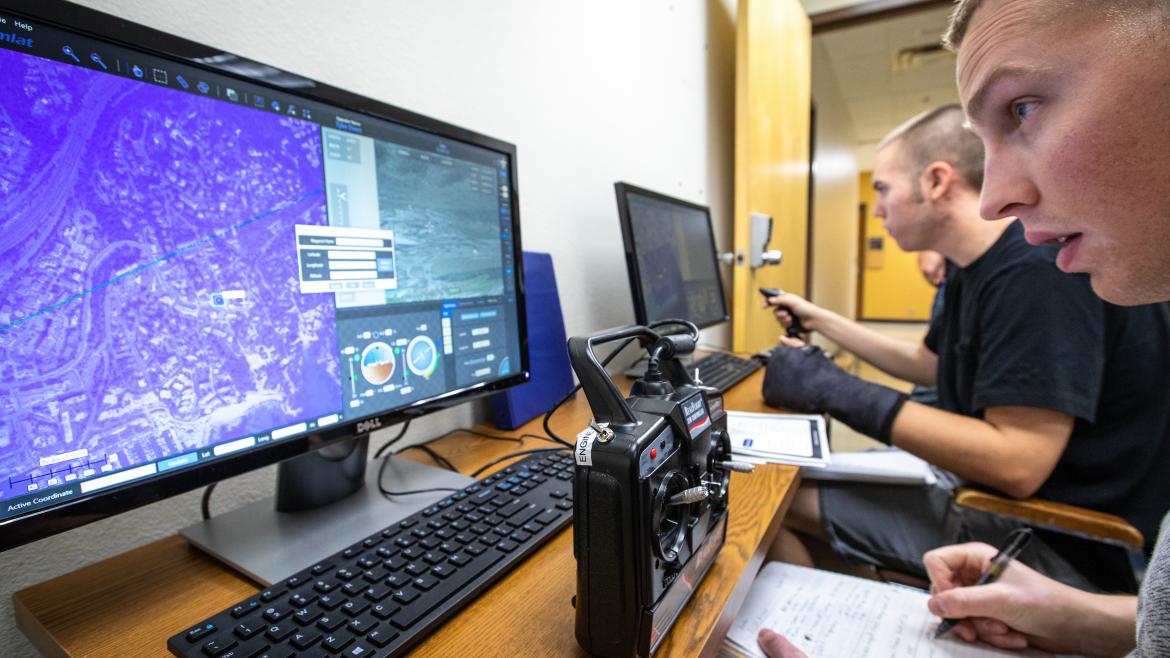 ASU's newest specialties in the spotlight as more than 15,000 receive degrees at spring commencement

An earthquake has hit the southern coast of Majorca in the Mediterranean, causing a tsunami. Survivors are scattered around the Bay of Palma, setting signal fires.

Drone teams have been tasked with searching the northwest coast for an unknown number of survivors. When spotted, they are to notify search-and-rescue teams of locations and numbers of people. They’ve each been given a two- to three-kilometer-wide corridor to search. It’ll take an hour, cruising at about 2,000 feet.

Air traffic control clears Collin Schmitt and Tyler Dears for takeoff. They avoid a thunderstorm and head for their grid, high above the bay.

As they come across the water, Dears spots a group standing around a fire on the roof of a yellow three-story building.

“Oh yeah, we got people on a rooftop!”

Schmitt calls in the coordinates.

These are students of one of Arizona State University’s two newest degrees in action. Both new programs — drone pilots and fashion — are pushing their first grads out into the world this month.

A cohort of 10 is graduating from the drone program. The degree is officially called the Bachelor of Science in aeronautical management technology (unmanned aerial systems). The Herberger Institute for Design and the Arts is decreeing two grads with Bachelor of Arts in fashion degrees in a program directed by Dennita Sewell, curator of fashion design at the Phoenix Art Museum. 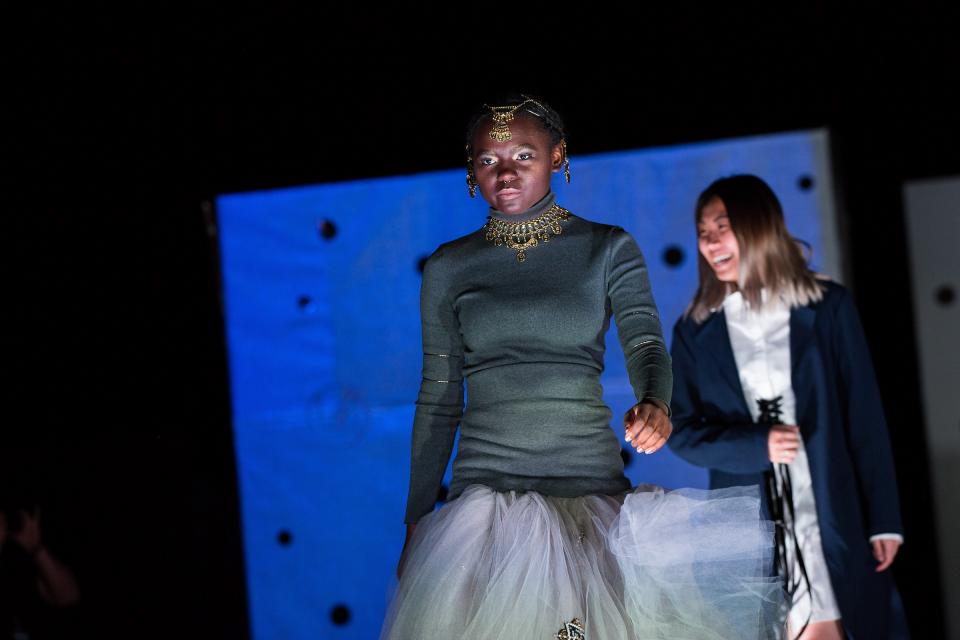 Film senior Latavia Young presents the work of Carol Wong (right) on the runway during the "Uncertainty" student-run fashion show March 31 in Tempe. Wong is one of the first two graduates in ASU's new fashion degree program. Photo by Deanna Dent/ASU Now

Schmitt, a current enlistee in the Air National Guard, wants to fly for the Air Force, either remotely piloting or manning an aircraft.

“I would like to push my career to new heights — literally — and I see this degree really helping me accomplish that,” Schmitt said. “Unmanned aerial systems is a newer field, and I see a lot of potential and growth in that area in the near future. I wanted to pursue a degree program that was new and focused on a whole other side of aviation.”

Like Schmitt, the newly minted drone pilots will head into the military or into the burgeoning field of civilian applications. The latter encompasses inspections of bridges, power lines, canals, fence lines and other infrastructure. Hollywood uses drone pilots heavily. Aerial photography for real estate is in demand. NASA uses drones for research. Law enforcement use is on the rise, both for search-and-rescue and pursuit. The U.S. Fish and Wildlife Service uses drones to monitor wildlife.

“In the current market you’re only limited by your imagination,” instructor Don Wood said.

An industrial advisory board visits the program once a year, pointing out what industry is looking for.

“The students graduate with usable knowledge,” Wood said. “We work with industry to advise on the program and keep it relevant.” 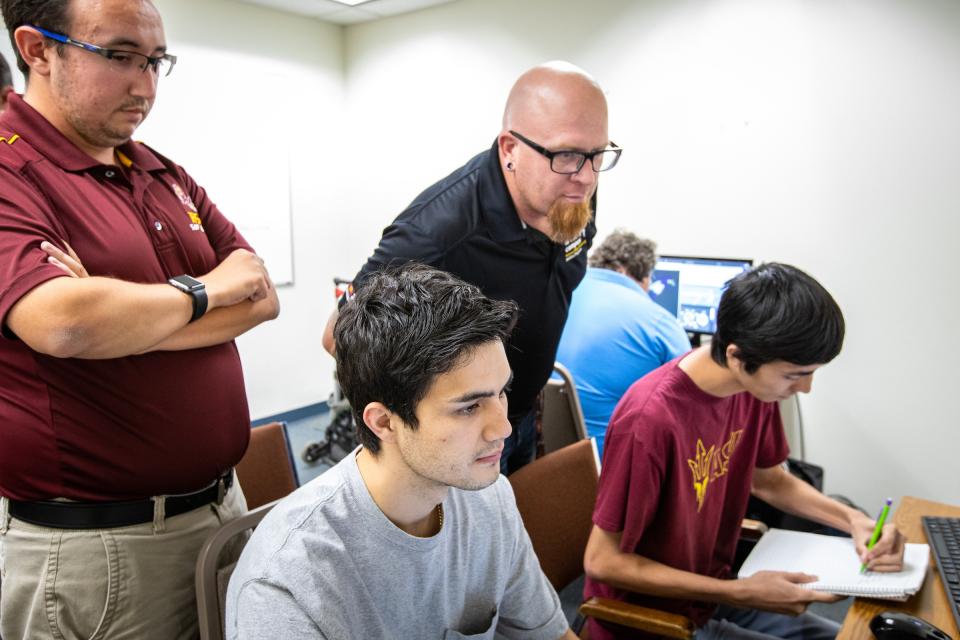 ASU Instructor Don Wood (top right) looks over the monitors with mission creators (from left) Matt Steinmetz, Zachary Yoder and Brandon Atkinson at the Polytechnic campus April 10 as the rest of the class works a simulated drone flight with a mission to locate survivors of an earthquake-caused tsunami. Photo by Charlie Leight/ASU Now

Opportunities are wide open in the drone world. Overhead is low, too: operating costs are cheap and maintenance minor.

“The industry is so new it’s not dominated by big players yet,” Wood said. “If you have an entrepreneurial mindset and a go-getter attitude, it’s a great time to get into the business.”

They all know how to pilot both fixed-wing and quadcopter drones. (“That’s extremely common in the industry,” Wood said.) They start out on simulators, then move outside. Wood tells students to treat it like it’s a plane. “Fly first,” he says.

Whether it’s with frills or thrills, on Graduation Day all the newest Devils grads will soar.

Find a complete list of individual college and special-interest convocations, details on the clear-bag policy, ticketing and RSVP requirements, photo information and more at the official ASU graduation page.

Top photo: Drone student pilot Collin Schmitt (right) and student navigator Tyler Dears work a simulated drone flight with a mission to locate survivors of an earthquake-caused tsunami off the southern coast of Majorca, at the Polytechnic campus' Simulation Building on April 10. The students are part of the first cohort of 10 graduates in aeronautical management technology with an emphasis in unmanned aerial systems. Photo by Charlie Leight/ASU Now