Alpizar studies with Jeffery Meyer, associate professor and director of orchestras in the ASU School of Music, and Tito Muñoz, conductor and music director of the Phoenix Symphony. 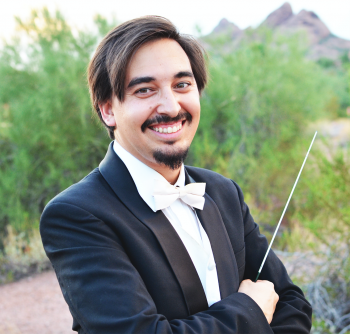 “I chose to apply to the National Repertory Orchestra because of my respect for the music director, Carl Topilow,” said Alpizar. “I was privileged to work with Topilow when he visited ASU last year to conduct the ASU Symphony Orchestra and lead our conducting studio class. I was encouraged by several NRO alumni, including ASU Symphony Orchestra concertmaster Vladimir Gebe.”

Alpizar said he is thrilled to be able to observe Maestro Topilow and other esteemed guest artists conduct an extensive amount of standard repertoire and looks forward to meeting an entire orchestra full of pre-professional musicians who are also on the cusp of careers in music.

“The National Repertory Orchestra is one of the most respected training grounds for young orchestral musicians in the United States,” said Meyer. “The competition for the assistant conductor position is quite fierce, and winning the position requires not only excellent conducting skills, but an engaging, confident and mature personality on and off the podium. Mark exemplifies these qualities — he is not only a terrific conductor, but he has a warm demeanor and humble confidence that allows him to connect easily with musicians and audiences alike. I am certain that his summer at the NRO will prove to be a very important step in his career path.”

Alpizar credits Meyer for helping him move forward in his career.

“I have been privileged to work with Jeffery Meyer in my last two years of conducting studies here at ASU,” said Alpizar. “Through his guidance, my career has taken a huge leap forward and I have been invited to conduct educational concerts for the Phoenix Symphony and have conducted the ASU Symphony, the Phoenix Youth Symphony and the East Valley Youth Symphony. Professors Robert Spring, Joshua Gardner and Jason Caslor have also been extremely influential to me, mentoring my career as a conductor and performer.”

Spencer Torkelson tied the Pac-12 freshman record for home runs and Alec Marsh dealt all night but late errors would undo the Sun Devils in a 6-2 loss at No. 5 Oregon State on Friday evening. ... Spencer Torkelson tied the Pac-12 freshman record for home runs and Alec Marsh dealt all night but late errors would undo the Sun Devils in a 6-2 loss at No. 5 Oregon State on Friday evening.