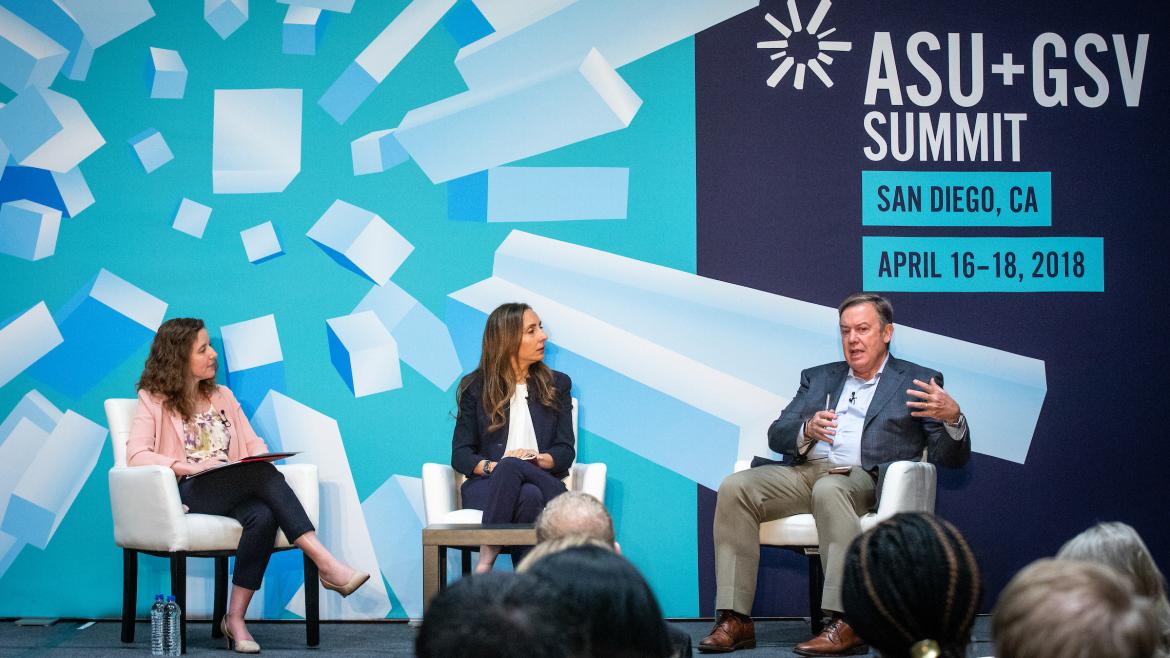 The Arab world has one of the world’s youngest populations and is in great need of access to higher education to accelerate its economy — a challenge that Arizona State University is helping to solve.

Maysa Jalbout, founding CEO of the Abdulla Al Ghurair Foundation for Education, spoke at the ASU + GSV Summit in San Diego on Tuesday about improving education in Arab countries through a partnership with ASU. The Al Ghurair Foundation is a Dubai-based organization that provides underserved, high-achieving Arab students with scholarships, support and skills training.

“The challenges in the Arab world are not unlike challenges in global communities around higher education, but they happen to be more acute,” she said.

“The first is around access. If you come from a privileged background, you’re three times more likely to get access to higher education. The second is quality.

“The third, and the one closest to my heart, is conflict. You have these huge disruptive factors which are robbing young people of the opportunity to continue their education.”

ASU President Michael Crow said that traditional universities are not suited to quickly moving to help on a global scale because of their old-fashioned culture and design.

“Academia as a culture is too much built around the notion that we educate the worthy and the smart and the gifted. We build exclusion as a measure of excellence, as opposed to impact,” he said.

“And (traditional universities) are designed like religious organizations rather than complex, socially engaged, transformative institutions. They’re slow to change, argumentative and not interested in broader social issues.”

That outdated model prevents universities from responding to the refugee crisis, Crow said.

But by empowering faculty and changing the model, ASU is able to extend its reach around the globe.

“We can say we’d like to engage with the refugee community in Jordan with education content at scale. Or we’re working with friends in the Middle East who are finding new ways to expand STEM education,” he said.

“We’re able to do that in real time because of the change in culture as well as our deep commitment to technology.”

The Abdulla Al Ghurair Foundation for Education has partnered with ASU on three initiatives to provide education to Arab youths in 22 countries: Open Learning Scholars, a four-year scholarship program for students to acquire master’s degrees from ASU Online; the Young Thinkers program, an ASU-built online college- and career-preparation platform for high school students in the United Arab Emirates; and STEM Scholars, an opportunity for students to study for their master’s degree at ASU while also receiving mentorship and other support.

Jalbout said that high rates of unemployment are driving an urgency to innovate in education.

“We’re the youngest region in the world and we have the highest youth unemployment rate, close to 30 percent, and our enrollment rates in higher education are lower than the global average, at 28 percent and the global average is 35 percent,” she said.

Half of the world’s refugee population resides in the Arab world, Jalbout said.

“Among young people, 80 percent of those not in school come from conflict countries,” she said. “It transcends borders. Syrians are everywhere in the region.”

Yet there are many opportunities too, Jalbout said.

“We think the solutions are close at hand and achievable. We’re looking to create partnerships like the one with ASU to solve some of those problems.”

Top photo: Maysa Jalbout (center), founding CEO of Abdulla Al Ghurair Foundation for Education, and moderator Jacqueline Smith, an assistant vice president and executive director of the Office of University Initiatives listen to ASU President Michael Crow during a panel discussion on "Responding to Educational Needs in the Arab World" at the ASU + GSV Summit on Tuesday. Photo by Charlie Leight/ASU Now

Editor's note: Read more of the highlights from the ASU + GSV Summit on our blog.Arizona State University has changed its role in preparing graduates for the workforce beyond the traditional work of a career services office. At the ASU + GSV Summit, ASU leaders discussed how they positioned the university at the forefront of workforce transition innovations.Cindy Parnell, executive director, car...

Arizona State University has changed its role in preparing graduates for the workforce beyond the traditional work of a career services office. At the ASU + GSV Summit, ASU leaders discussed how they positioned the university at the forefront of workforce transition innovations. 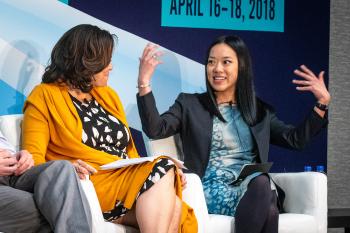 Cindy Parnell, executive director, career and professional development services: In the last decade, career services has undergone steep disruption around the return on investment of a college degree. The old model of career centers being a physical place where a student has to walk through the doors to receive services and support typically from a master’s level professional in one hour is long gone. Now career services is starting to integrate across the ecosystem to foster those career-readiness skills. We call it more of a presence than a place.

Nicole Taylor, deputy vice president and dean of students: In 1980, 80 percent of the undergraduate pop was white. At ASU 50 percent of our first-time students right now are not white. That’s the given. As we think about how we’re educating, if we start at that alone, it changes the game. Our institutions are structured in a way that catered to students in the 1980s.

The helicopter parent isn’t going away. I have more parents who reach out to me than students. It’s a given. We have to deal with parents and family members as well as students.

The other is coping skills. The transition to postsecondary education is dramatic anyway. It is hyper-dramatic for our current college students. We have seen a 92 percent increase in counseling appointments over five years ago. Then you add things like DACA. That all changes how we’re preparing this generation of students for work.

We’ve taken an approach at ASU that all of the preparation doesn’t happen in career services. It happens in the colleges, the counseling center, anyone who is student-facing takes the responsibility across the university.

Grace O’Sullivan, assistant vice president, corporate engagement and strategic partnerships: Our industry participants aren’t just at the end of the pipeline catching talent. They come along for the entire journey. We’re engaged from site selection to talent, upscaling their current workforce to philanthropy. We say, "What do you need? What’s missing from our curriculum? Join our dean’s council. Teach a class. Help us build the skills. We need you to keep us relevant."

This model we’re launching is called practice labs. Think of this as problem-based learning where you’re in an environment where you can test the skills. One of our partners, Starbucks, has a technology center practice lab. They hired full-time employees to be embedded with us on campus. For them the internship is an interview.

Paul LePore, associate dean, College of Liberal Arts & Sciences: It’s probably not a shock that the question I get from a lot of parents is, "What will my son or daughter do with this degree?"

We didn’t want to call it a career center so we are creating a “future center.” Many of our students go to grad school. They go to professional training. We need to work carefully with a company so they feel the partnership is two-sided. I have students, I have families, I have faculty, I have alumni, I have business partners in the community, and they all have a role in this.

Solutions The College of Liberal Arts and Sciences Career development