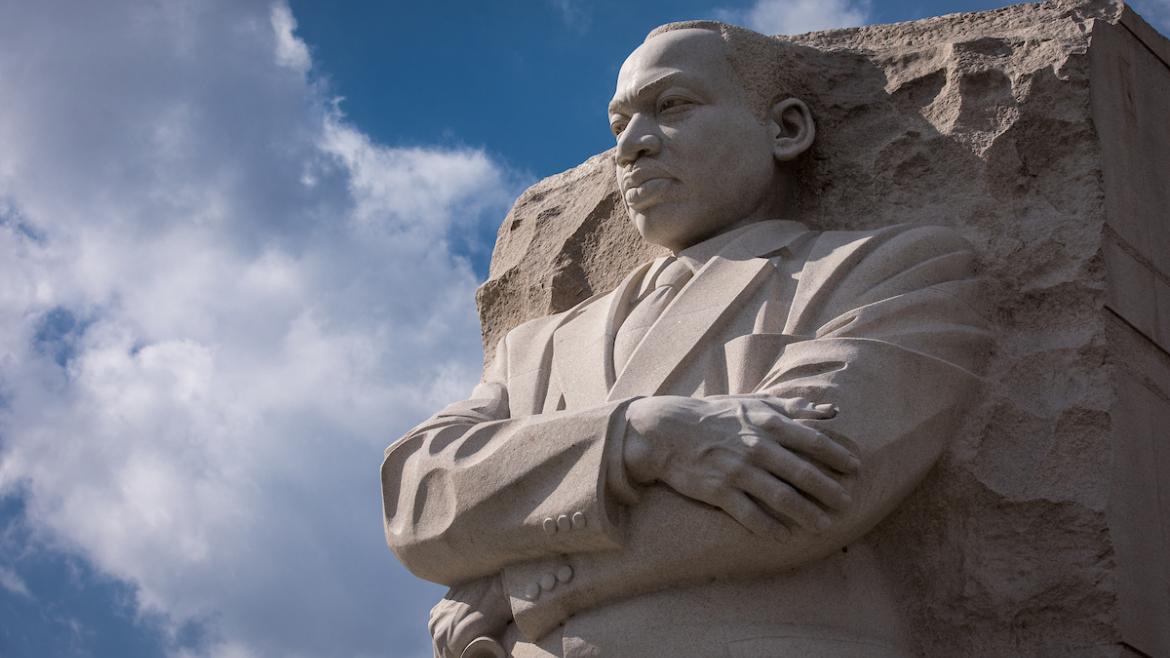 On April 3, 1968, the Rev. Martin Luther King Jr. delivered what has been called his most profoundly prophetic speech: “I’ve Been to the Mountaintop.” Just 32 hours later, he was dead — felled by an assassin’s bullet in Memphis, Tennessee.

But had it not been for a last-minute push from a trusted aide and an anticipatory crowd already gathered to hear the civil rights leader speak at a historic Memphis church, the public address that would become King’s last might not have happened.

ASU Now spoke with author and Arizona State University Professor Keith MillerKeith Miller is a professor in the Department of English in the College of Liberal Arts and Sciences and the interim director of the Center for the Study of Race and Democracy in the College of Integrative Sciences and Arts at Arizona State University. Miller is a recognized scholar on the rhetoric and songs of the U.S. civil rights movement and has written books and essays on the speeches of Martin Luther King Jr., Jackie Robinson, Frederick Douglass and Fannie Lou Hamer, among others., who revisits the stormy staging for King’s final speech and shares how a little-known architect may have played a key role in what Miller believes to be a defining but largely overlooked address.

Question: “I’ve Been to the Mountaintop” is highly regarded as one of Martin Luther King Jr.’s more memorable orations. How would you rank this speech among his other speeches?

Answer: I personally consider “I’ve Been to the Mountaintop” to be King’s greatest speech. His most famous speech, “I Have a Dream,” lasted only 18 minutes while “I’ve Been to the Mountaintop” lasted about an hour. Later in his life, many of King’s speeches reflected deeper and more sophisticated thinking on his part, simply because he kept growing and maturing. He gave the speech to support striking African-American garbage workers in Memphis, who were not paid a living wage. So, the “Mountaintop” speech attacked both poverty and racism, which he viewed as intertwined phenomena. “I Have a Dream” doesn’t really do that, or at least not very much. 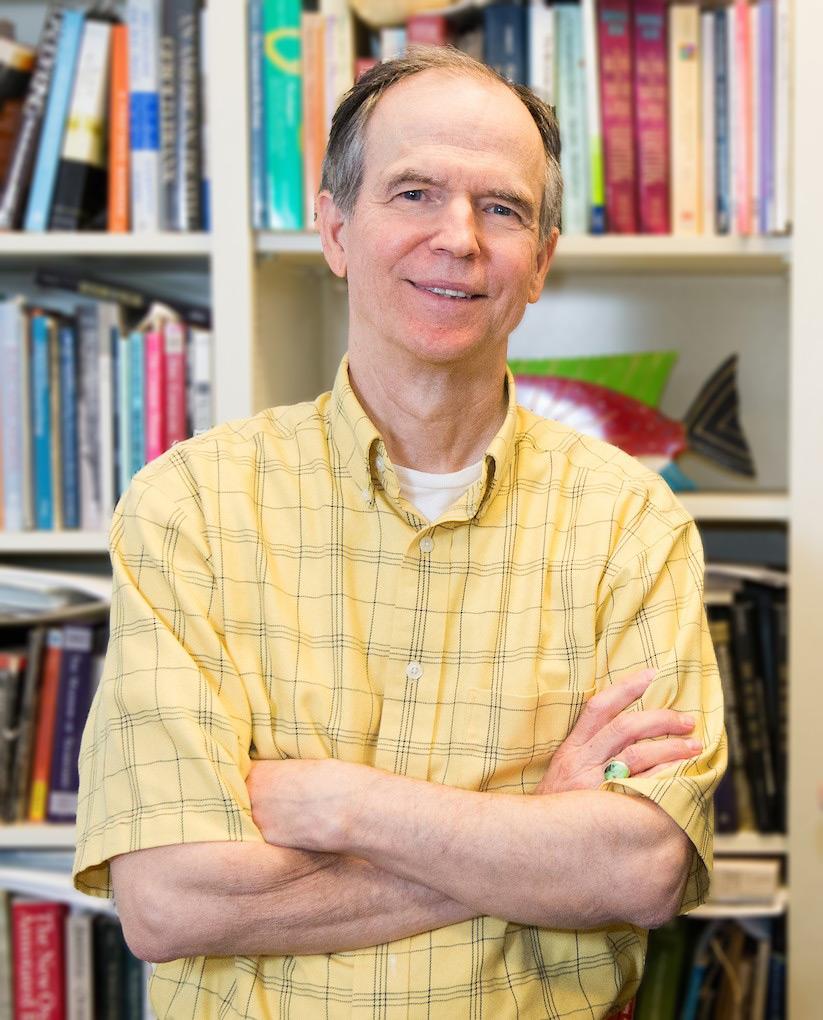 Q: It has been documented that King almost passed on delivering his “I’ve Been to the Mountaintop” speech. What circumstances and cultural climate might have dissuaded King from speaking to the crowd gathered to see him that night? What prompted him to go forward with it?

A: King wanted to stay in his motel room that night, dispatching his chief lieutenant, Ralph Abernathy, to talk in his place. He sent Abernathy because he was exhausted and because a huge thunderstorm (complete with a tornado not too far from Memphis) arrived that night, making him doubt that many people would appear. But Abernathy arrived to find 3,000 exuberant people at the Mason Temple, so he called King and persuaded him to speak.

For King’s appearance at the church, I credit the almost totally unknown architect who completed the Mason Temple in 1945. His last name is Taylor, but his full name is not really known. Research suggests Keith Miller is the author of the books “Martin Luther King’s Biblical Epic: His Final, Great Speech” (the only book on King’s last speech) and “Voice of Deliverance: The Language of Martin Luther King Jr. and its Sources.” he was credited as W.H. Taylor or sometimes just H. Taylor. He was apparently African-American and an elder in the church, but no one knows what other buildings he built nor how he possibly learned architecture and became certified as an architect in the segregated South at the time that he worked.

Without the architect, the only other available indoor venues would have seated around 300 people at most. In that event, King would never have left the room at the Lorraine MotelMartin Luther King Jr. was fatally shot while standing on the balcony of the Lorraine Motel on April 4, 1968 — one day after delivering the "I've Been to the Mountaintop" speech. at which he was staying and never have given a speech that night.

Q: Much of the focus on “I’ve Been to the Mountaintop” has revolved around the last few minutes of the speech in which King talks about getting to the promised land. What else should we know about the speech that has been largely defined by this and other prophetic references?

They claim that King was using the speech to predict his assassination when, actually, he often talked both in orations and in private about the likelihood that he would be assassinated. Further, when King finished his last address, the crowd erupted in jubilation. People were cheering wildly. One woman said that after this speech she knew that the garbage workers would win their strike. If members of the audience believed that King was predicting his own demise the next day (or even his own demise during the Memphis strike), they would not have experienced a sense of elevation and joy at the end of the speech.

During the last two minutes of the address, King alludes to Moses. The only way to understand this allusion is to grasp his two references to the Exodus and to Moses earlier in the speech (once in the beginning and once in the middle). It’s also important to grasp his long interpretation of the Parable of the Good Samaritan. King interprets the garbage workers as slaves to the new Egyptian pharaoh, the mayor of Memphis. He also interprets the garbage workers as the roadside victim in the parable and thereby explains the Memphis strike as part of an ongoing biblical drama. He encourages people to locate their own places in the biblical drama that spirals through history.

Q: What do we know about King’s final hours after he delivered this speech?

King was happy the next day. When his lieutenant Andrew Young returned from court to the motel room, he told King that the judge had lifted an injunction against a future protest march in Memphis. King was so pleased to hear this report that he immediately initiated a pillow fight with Young and they laughed like children.

He also teased a local minister, Billy Kyles, about their need for a good dinner that night. Speaking to another lieutenant, Bernard Lafayette, he said, “Bernard, we need to institutionalize nonviolence.” This comment revealed his awareness of the limitations of ad hoc nonviolent campaigns that jumped from one city and town to another on the spur of the moment, which is what largely happened during the civil rights movement.

Bernard Lafayette, who is still alive, has tried to do that, leading many workshops on nonviolence in the U.S. and overseas. But I think King was signaling to Lafayette that we actually need giant, well-funded centers to research and implement nonviolence and to determine which nonviolent tactic is appropriate in which circumstance. I think such a development would have meant much more to King than being memorialized in a national holiday.

Top photo: The Martin Luther King Jr. Memorial in Washington, D.C., with the statement "Out of the mountain of despair, a stone of hope." Photo by Charlie Leight/ASU Now

How should urban planners and policy-makers manage autonomous vehicles? How can innovators and entrepreneurs develop new technologies that respond to the needs of communities and produce better health outcomes? How can private and public data protect and empower vulnerable populations?These are some of the questions Arizona State University's new Center for Smart Cities and Regions will address, ...

New ASU center will help cities and regions use data analytics and emerging technologies to advance their economic, social, cultural and overall health

How should urban planners and policy-makers manage autonomous vehicles? How can innovators and entrepreneurs develop new technologies that respond to the needs of communities and produce better health outcomes? How can private and public data protect and empower vulnerable populations?

These are some of the questions Arizona State University's new Center for Smart Cities and Regions will address, as it works to improve the ability of communities to leverage the Internet of Things and other new technologies to advance their economic, social, cultural and overall health. 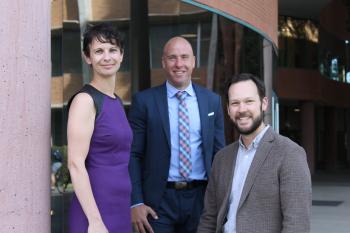 Diana Bowman and Thad Miller, co-directors of the Center for Smart Cities and Regions, with Dominic Papa, executive director and co-founder of the Institute of Digital Progress. Photo by Marissa Huth/School for the Future of Innovation in Society

Working closely with policy-makers, city planners, entrepreneurs, industry leaders and the public, the center will enhance the capacity of cities and regions to use data analytics and emerging technologies.

"We increasingly have the tools and the technologies to address local, regional and global problems,” said Diana Bowman, co-director of the center and associate professor with the School for the Future of Innovation in Society and the Sandra Day O'Connor College of Law. “However, unless these technologies are developed and deployed in a way that is responsive and responsible, their potential benefits are unlikely to be realized.”

“By partnering with the Center for Smart Cities and Regions at Arizona State University, the regional effort will be able to continually refine smart technology solutions. This partnership will enable the region to harness the knowledge and capacity of the most innovative university in the nation," Papa said.

ASU as Smart Living Lab — The Center for Smart Cities and Regions will work with the ASU University Technology Office to build a “smart campus” that makes the ASU community experience better. For example, the center is collaborating with the Ira A. Fulton Schools of Engineering in examining the use of Amazon Echo devices in use by engineering students residing in Tooker House.

Governance of Autonomous Vehicles — The center is working is working with cities, including Tempe, to manage the risks and benefits of self-driving cars.

Educational Programs — The center will develop of educational programs around smart technology with the School for the Future of Innovation in Society, including the Smart City Academy, graduate certificates and concentrations.

Opening Pathways for Discovery, Research, and Innovation in Health — A collaboration between patients and traditional researchers to explore the processes around discovery, research, and innovation in health and healthcare where patients have created and shared a closed-loop artificial pancreas. The project, led by a patient as principal investigator, is supported with grant funding by the Robert Wood Johnson Foundation.

“Rapidly emerging technologies, like autonomous vehicles, present both risks and opportunities to cities,” said center co-director Thad Miller, assistant professor with the School for the Future of Innovation in Society and the Polytechnic School at ASU. “[The center] works with city policy-makers and planners — as well as industry and the public — to help them leverage technology to meet their goals and community needs.”

The center will take a multi-disciplinary approach to collaborative research by bridging the gap between science and technology research and urban governance.

To learn more and become involved with the projects and initiatives, visit the Center for Smart Cities and Regions.