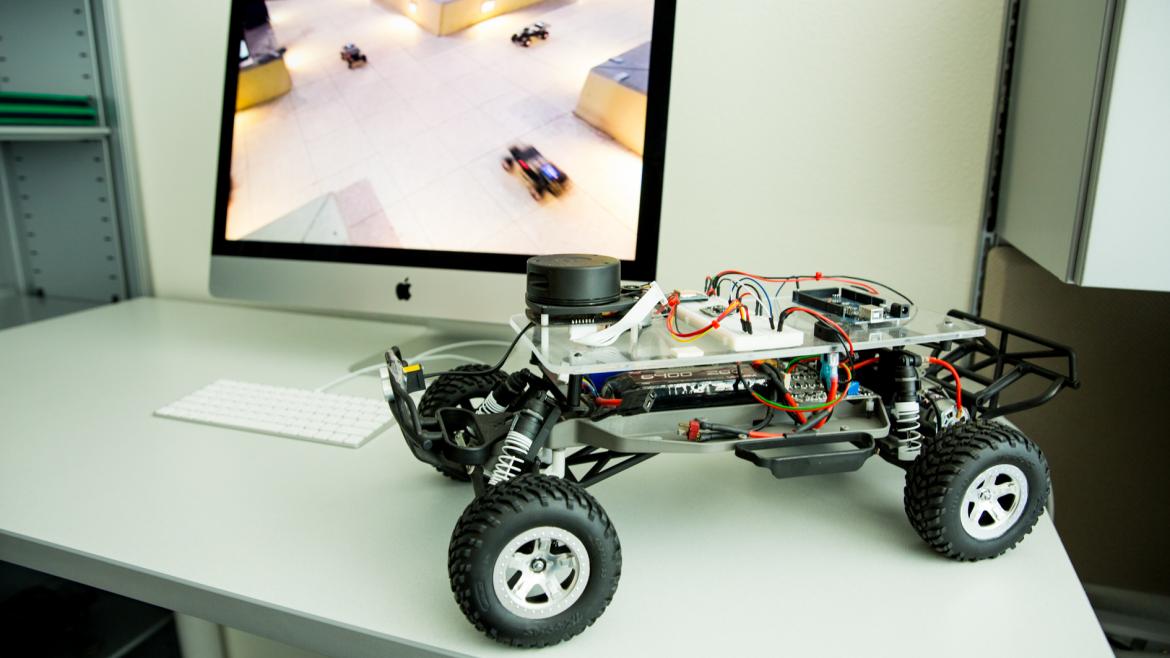 We should hold autonomous vehicles to a higher standard, ASU engineer says.
March 26, 2018

The current method of programming autonomous vehicles may not be safe, according to Aviral Shrivastava, a computer science associate professor in Arizona State University’s Ira A. Fulton Schools of Engineering.

“Google, Uber and others in the field are using humans to teach cars how to drive themselves,” explained Shrivastava. “And that’s the problem. They are learning from human drivers, all of whom are fallible, and the autonomous cars are in turn mirroring our unsafe driving behaviors.”

Shrivastava is known on campus for his embedded computing course, which challenges students to engineer a self-navigating, obstacle-avoiding toy race car complete with GPS, a laser surveying system (LIDAR), an inertial measurement unit to calculate distances and other sensing tools used in full-scale autonomous vehicles.

A fatal accident involving a self-driving Uber vehicle and a pedestrian earlier this month in Tempe, Arizona, caused Uber to suspend its driverless operations in Arizona. On Monday, Gov. Doug Ducey suspended Uber's tests of self-driving cars on Arizona roads, according to The Arizona Republic.

The video captured by the vehicle just before the March 18 accident illustrates the pedestrian was crossing the road, outside of a pedestrian walkway, in the dark. Lights from the car, streetlights and ambient lighting failed to illuminate the pedestrian.

“Since the Uber car could not detect anything in the dark area, it did what a human driver might have done — proceeded as though there was no one in the road. When the car’s lights brought the woman suddenly into view, the car was travelling too fast to stop,” Shrivastava said.

Shrivastava asserts that an autonomous vehicle should travel only at the speed at which it can stop before its range of vision ends — the vehicle should be traveling slowly enough that it can instantly stop if an obstruction suddenly comes into view.

“When encountering a situation like that on Mill Avenue, a safety-focused vehicle’s computer would assume there is an obstacle in the unlighted area and proceed accordingly, unlike humans who often assume that the path ahead is clear,” he said.

Tempe police chief Sylvia Moir said, “I suspect preliminarily it appears that the Uber would likely not be at fault in this accident,” concluding that regardless of whether the vehicle was driven by a human or autonomously, “it’s very clear it would have been difficult to avoid this collision in any kind of mode based on how she came from the shadows right into the roadway.”

However, expectations for a human driver and autonomous cars are very different, said Shrivastava.

“As long as human behaviors are the foundation of automated driving technology, safety will continue to be an issue,” Shrivastava added. “The priority for autonomous cars should be safety, rather than a human-like driving experience.”

Shrivastava’s research, funded by the National Institute of Standards and Technology and the National Science Foundation, focuses on cyber-physical systems designs — mechanisms like autonomous vehicles in which a computer controls a physical system — that guarantee the behavior of the systems.

“For example, we look at how can we build a car in which there is a guarantee that if an obstacle is detected, brakes will be applied within one millisecond,” explained Shrivasta.

Recently, Shrivastava developed an algorithm for autonomous cars that promises to more than double the throughput of traffic intersections, “which are really the most important bottleneck in city traffic,” he said. While the system will work only on roads that are fully autonomous, “the communications and calculations we’ve developed will enable autonomous cars to zip through intersections at full speed or with just a minor slow-down.”

Left-handed pitcher G Juarez received two of the most prestigious NCAA awards for the week, earning both NFCA and USA Softball honors. ... Left-handed pitcher G Juarez received two of the most prestigious NCAA awards for the week, earning both NFCA and USA Softball honors.