In most cultures, identity is inextricably tied to the land, and when land is taken, cultures can struggle to survive. But communities can change that narrative, reclaiming land and heritage, according to two professors who represent cultures that are very far apart and yet face similar paths.

The annual Roatch-Haskell lecturesThe John F. Roatch Global Lecture Series on Social Policy and Practice hosts an internationally known scholar to lecture on a topic of global and social significance to the Arizona community. The event was established by John and Mary Roatch. The Linda Haskell Memorial Master Class capitalizes on national and international talent to create an interactive forum for the discussion of current topics of concern to human-services practitioners in Arizona. The event was established by Rose and William Haskell to honor the memory of their daughter Linda Haskell, a social worker who died in 1992., held Friday in Phoenix, addressed issues of land and identity in talks by two professors — Frank Rennie, professor of sustainable rural development at the University of the Highlands and Islands in Scotland, and Robert Miller, professor at Arizona State University's Sandra Day O’Connor College of Law and the director of the Rosette LLP American Indian Economic Development Program. The lectures were presented by the School of Social Work at ASU.

The Outer Hebrides islands of Scotland are far away from Indian reservations, but the two cultures share a history that involves losing their land and seeing their heritage face annihilation.

Rennie, who gave the Roatch lecture, said the Scottish Gaelic language reinforces the notion of embeddedness.

“It has a sense of ‘you belong to the land’ rather than ‘the land belongs to you,’ ” he said. 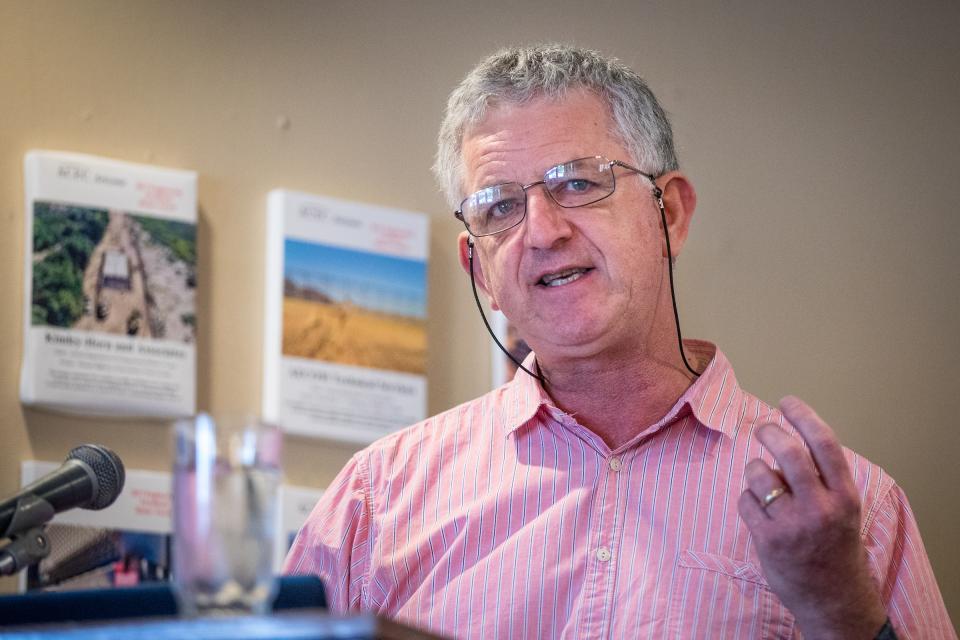 Frank Rennie, professor of sustainable rural development at the University of the Highlands and Islands in Scotland, explained how charitable trusts have begun returning privately owned land to the people. Photo by Charlie Leight/ASU Now

Rennie described the history of the area, going back to 1746, when war wiped out the highland clan culture, with the indigenous language and wearing of tartans banned. Land passed from the family clans into private hands, and many highlanders fled to the coast to become tenant farmers on plots called “crofts.” Many in the clans were hunted down and killed.

“We were not taught this story in school,” Rennie said. “We were taught about the Romans and the American war of independence but not about what happened on our own doorstep.”

Many Scots served in World War I under the promise that they would get land when they returned, but that didn’t happen. The frustrated villagers began “land raids,” grabbing bits of property over time. By the 1990s, Scotland returned its parliament from London to Edinburgh and took on the issue of land reform.

“Even to this day, the imbalance of owning of land by heritage families is so strong within Scotland that if we were to apply for development from the World Bank, they wouldn’t look at us because of the imbalance,” Rennie said.

But now, many villages have formed charitable land trusts to buy back land for their communities. The villagers still pay rent, but to the trust and not a private owner. The trust in Rennie’s village, on the Isle of Lewis, has invested in wind turbines, which produce income that can then be spent locally.

Rennie sees a direct link from that history to the results of recent votes, when Scots narrowly voted against breaking away from the United Kingdom, and voted overwhelming for remaining in the European Union.

“The sense of community is tangible, and that’s led to a drive to be more assertive on the world stage,” he said.

Miller, who is a citizen of the Eastern Shawnee Tribe of Oklahoma, found many parallels between the Scots and American Indians, including the whitewashing of history to conceal the stealing of land. Robert Miller, a professor in the Sandra Day O'Connor College of Law at ASU, said that private-sector development is key for Indians to move out of poverty. Photo by Charlie Leight/ASU Now

“People raised on reservations, they’re pulled back to their homeland and they want to own their homeland. There’s this sense of belonging to the land — that’s what every American Indian says,” said Miller, who delivered the Haskell lecture.

After America broke from England and looked westward toward expansion, the narrative was that the lands were available for the taking. He showed a letter in which George Washington compared Indians to animals, calling them “savage” and “beasts of prey.” But actually, the tribes had a sophisticated culture involving agriculture, trade networks and a system of public and personal property.

“Women would own berry patches that they would pass on to their daughters,” he said. “We’re not taught about that. We want to think the country was empty.”

Miller said that the United States still claims legal title to Indian lands, dating back to 1790.

“Tribes can’t sell or develop their land without permission from the secretary of the interior,” he said.

This history has led some Indians to mistrust capitalism as a way out of poverty, but Miller said that private-sector development is the best way to keep money on the reservation.

Miller works with the Navajo Nation, which has about 200,000 citizens on its reservation. Demographically, there should be nearly 2,800 privately owned businesses. In reality, there are 305.

“I worked for the Northern Cheyenne, and the only thing you could buy on their reservation was gas, so you could drive somewhere to spend your money,” he said.

Sovereignty and culture are crucial. Tribes must decide for themselves what kinds of businesses they want and separate that from politics, he said.

Miller said that there’s a “buy Indian” act from 1910 that allows the secretary of the interior to buy goods and services for Indians from Indians. Not only does he think the act should be mandatory, he thinks each tribe should enact its own “buy Indian” rule.

“I tell tribes to talk the talk and walk the walk.”

Rennie said that when communities have an independent income and are no longer dependent on government aid, it gives them flexibility to find new solutions.

“It reverses that colonial mentality,” he said. “You’re not just allowed to do things. You have a right to do things.”

The concept of identity is timely, according to Jonathan Koppell, dean of ASU's College of Public Service and Community Solutions.

“In 2018 America, identity is so much a part of our politics and we think of identity in largely negative terms. It’s been used by many to divide us.

“We mostly think of identity as being fixed — built off of racial or ethnic identity. I would argue that identity in the social sense can be constructed and built to achieve some of the same positives.”

Top photo: When the Scots were driven from the highlands to the coast, they lost their land and their culture was threatened, not unlike the history of American Indians. The Roatch-Haskell lectures, held Friday in Phoenix and spsonsored by the School of Social Work at ASU, addressed land and identity. Photo by Pixabay

Cairo Leonard-Baker, Spencer Torkelson and Kordell Norfleet have had breakout freshman seasons. Take a trip down memory lane to see how some other notable Sun Devils did in their freshman season. ... Cairo Leonard-Baker, Spencer Torkelson and Kordell Norfleet have had breakout freshman seasons. Take a trip down memory lane to see how some other notable Sun Devils did in their freshman season.