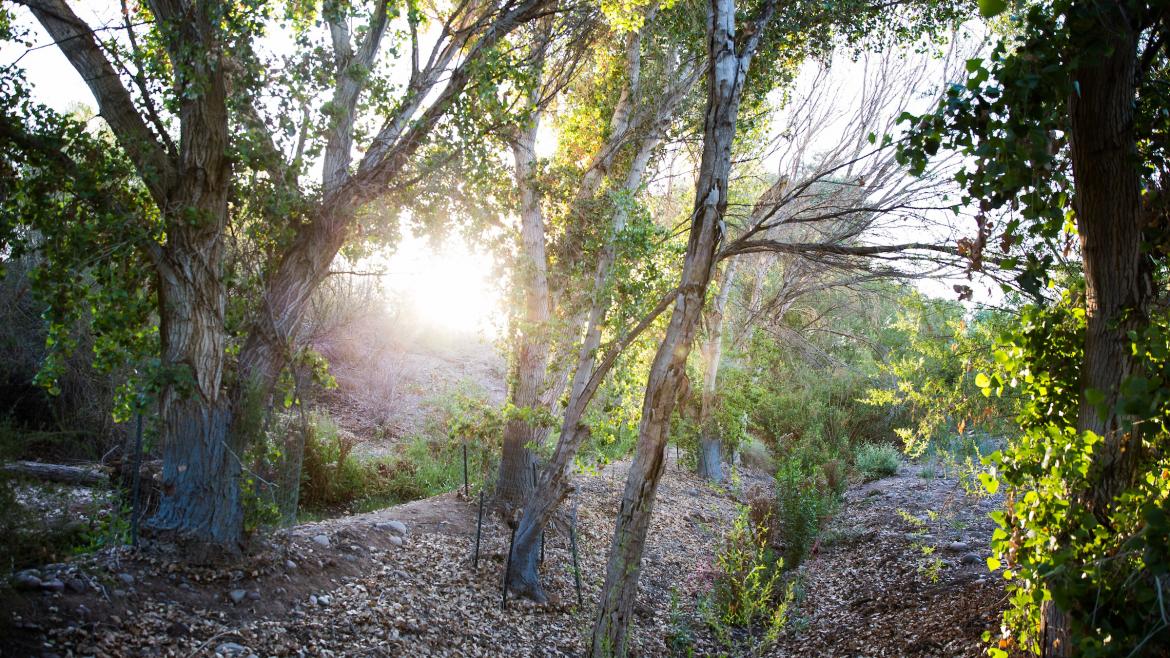 In the early morning hours of Saturday, March 17, while many Valley residents were sleeping off their pre-St. Patrick’s Day revelry, about 100 people were up with the sun, walking with quiet purpose through ancient gullies and around the bends of freshly paved pathways in the Rio Salado Habitat Restoration Area in Phoenix.

The group of early risers were participating in the ASU Museum of Walking’s (MoW) second annual 90-minute silent walk. theWALK, as the event is called, began last year as an exercise to bring together members of the community for a more contemplative experience of the simple, everyday activity of walking.

“Walking can inspire creative and divergent thinking as well as positively impact our well-being,” said Angela Ellsworth, associate professor at ASU’s School of Art and founding member of MoW.

The practice of mindfulness has a growing presence at ASU, with several faculty touting its benefits and some even incorporating it into their classrooms. Ellsworth took part in the opening of ASU’s Center for Mindfulness, Compassion and Resilience last May and said theWALK can be viewed as a mindful activity in that it allows people to be together in a new way, listening and learning about each other and the environment while experiencing the calming effects of slowing down.

“Culturally, we are trained to be talking or doing something all the time, and it’s just filler,” Ellsworth said. theWALK asks people to stop for a moment and ask, “What is it that’s really here? What are we not seeing because we’re talking or busying ourselves all the time?”

On Saturday morning, the peaks of South Mountain loomed through a thin but ominous veil of smog on the not-so-distant horizon. Yet the setting of the event, once a landfill and now a lush riparian preserve that is home to a variety of animals and vegetation, provided a hopeful glimpse of what the future may hold when more value is placed on the natural environment.

Still, evidence of the city that surrounds the area is everywhere.

At various points throughout theWALK, a duck calmly preened its feathers in a still pond as a semi backing up beeped in the distance and a plane roared overhead; a chorus of birds erupted underneath a viaduct as an SUV thundered across; a plastic grocery bag hung on a tree branch, mirroring the cumulus clouds suspended in the pristine blue sky behind it.

Some people have asked Ellsworth why a more remote, traditionally beautiful site wasn’t chosen for theWALK.

“Here,” she said, “you get such a beautiful mix of the history of the river, which goes back to the Hohokam, and the city as it is now. I think it’s such a rich environment to have this kind of experience.

“My hope is that people leave with not only a better awareness of themselves and a more expansive environment, but that they also think about what kind of choices they make that might affect it.” Phoenix-area retiree Rex Gulbranson participated in theWALK and said he was glad to see “a very abused area brought back to life and made into a point of pride again.”

Before walkers set off on their journey, Phoenix Park Ranger Winston Lyons told them how more than 1,000 tons of tires had been removed from the area and recycled, and more than 76,000 trees and 275,000 shrubs and other vegetation had been planted in their place. Silent walkers stop to admire the scenery at the Rio Salado Habitat Restoration Area in Phoenix during theWALK on March 17. 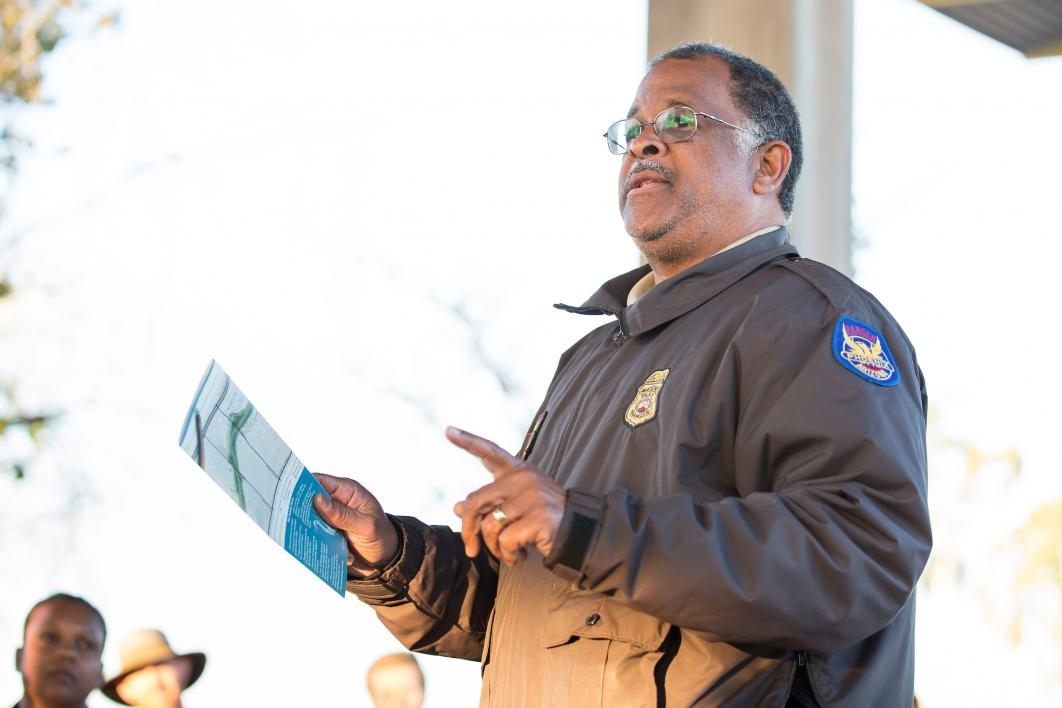 Phoenix Park Ranger Winston Lyons gave information on the kinds of wildlife they may encounter before the walkers set out. 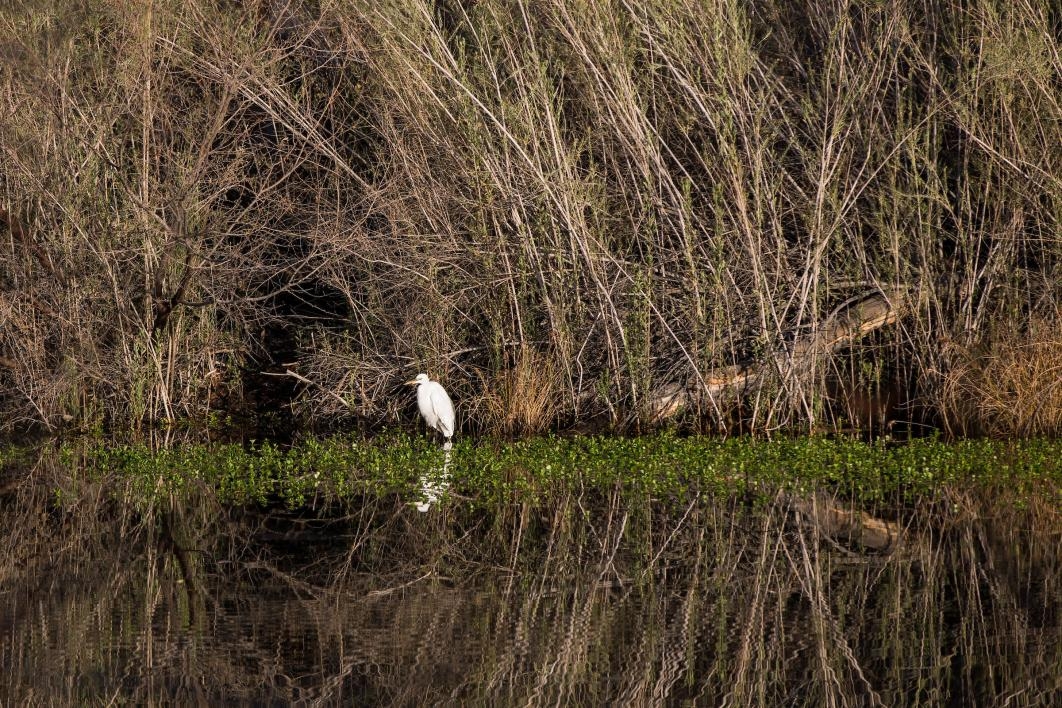 A snowy egret was one of the many types of animals spotted by walkers during theWALK. The Rio Salado Habitat Restoration Area, once awash with trash and old tires, is now a lush riparian preserve. Musicians were spaced along the walking trail, providing a musical backdrop for the walkers that complemented the nature surrounding them. Associate Professor Angela Ellsworth said that the Rio Salado Habitat Restoration Area was chosen for theWALK precisely because of its location in the heart of the city. The views from the trail may not be traditionally beautiful, but walkers are invited to contemplate the juxtaposition of nature and the city.

Lyons told the crowd to expect to see some wildlife along the way. “You will have a National Geographic moment,” he said.

Sure enough, near the end of the trail, a single hummingbird alit from a creosote, then hovered in midair for one breathless moment, seemingly just to present its brilliant, iridescent red breast to the walkers before zipping off to settle somewhere new.

Top photo: A view from the trail during theWALK in the Rio Salado Habitat Restoration Area in Phoenix on March 17. The 90-minute contemplative walk was hosted by the Museum of Walking, an artist-led educational resource center committed to the advancement of walking as an art practice. Photo by Deanna Dent/ASU Now