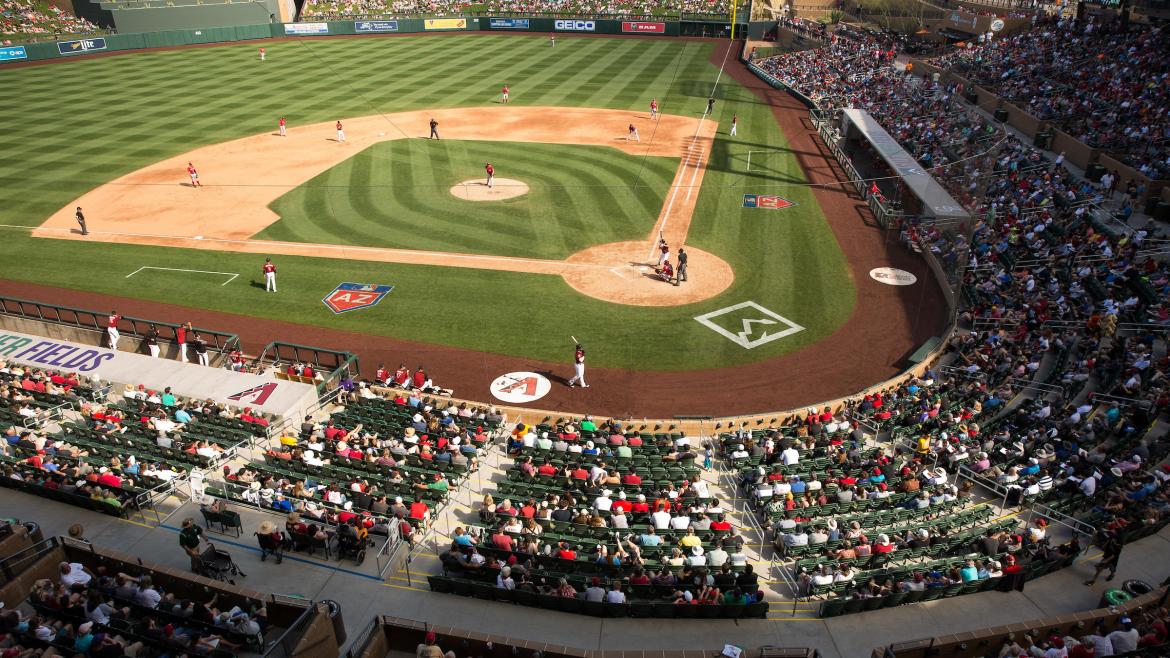 For most people, a spring-training baseball game means hot dogs and sunshine, but for a group of ASU students, the games mean thousands of empty bottles, slimy yogurt lids and handfuls of noodles.

The monthlong season is an economic boon to Arizona as fans flock to the 10 stadiums around the Valley. But along with enjoying baseball, they generate tons of waste.

A class from the School of Sustainability at Arizona State University is working to not only divert some of that garbage to be recycled, but also to engage with fans about sustainability in a way that’s positive and helpful, according to Colin Tetreault, a faculty associate in the school and a senior sustainability scholar in the Julie Ann Wrigley Global Institute of Sustainability.

“The power of sport and sustainability is a unique one,” he said. “When you’re at a stadium, it’s this esprit des corps. People are there to support the team. All of our social barriers go away — we are one team.

“So by using the power of sport, which people have a great love and affection for, meeting them where they’re at and speaking their language, you can actually take sustainability, make it real to them in a very approachable manner and give them something to take home after the game.”

The zero-waste project is a first-of-its-kind partnership among ASU, the Arizona Diamondbacks, the Colorado Rockies and Salt River Fields at Talking StickThe 11,000-seat stadium opened in 2011 and is LEED gold certified., the spring-training facility that is owned by the Salt River Pima Maricopa Indian Community and shared by the two teams in March. At the end of the semester, the students will deliver a report to MLB and Salt River Fields on how to get fans more enthusiastic about sustainability.

Eleven undergraduate and graduate students are taking the four-credit capstone class with Tetreault this semester in which they’re each attending at least 10 games. During the games, the students don green MLB caps and walk around the stadium surveying fans about their attitudes toward recycling. During the eighth inning, they run the “Recycle Rally” with the stadium's guest service attendants — collecting empty drink containers from fans in their seats. 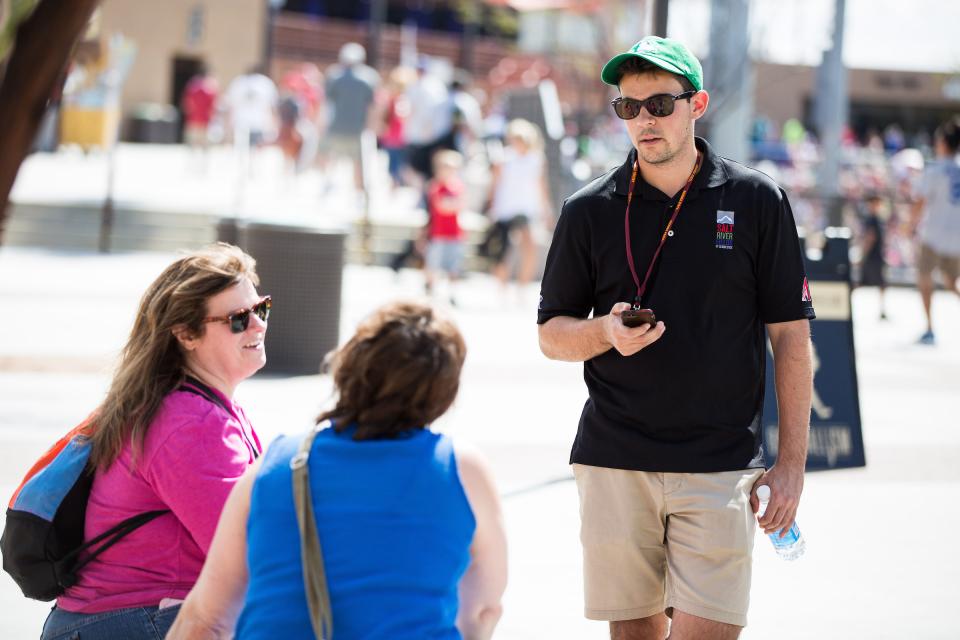 Sustainability senior David Salzetti chats with fans about their feelings on recycling during the March 14 spring training game between the Arizona Diamondbacks and the Cincinnati Reds at Salt River Fields at Talking Stick. Photo by Deanna Dent/ASU Now

The students are learning to work with people to make change in the world and not just lecture them, Tetreault said.

So, for example, the Recycle Rally is presented as a service.

“It’s ‘I’ll take your cup so you can buy another drink and have a better fan experience,’" he said. “You get the same outcome but now you have affection and not animus.”

Senior David Salzetti, one of the students in the class, has found that while many fans embrace recycling, not all do. 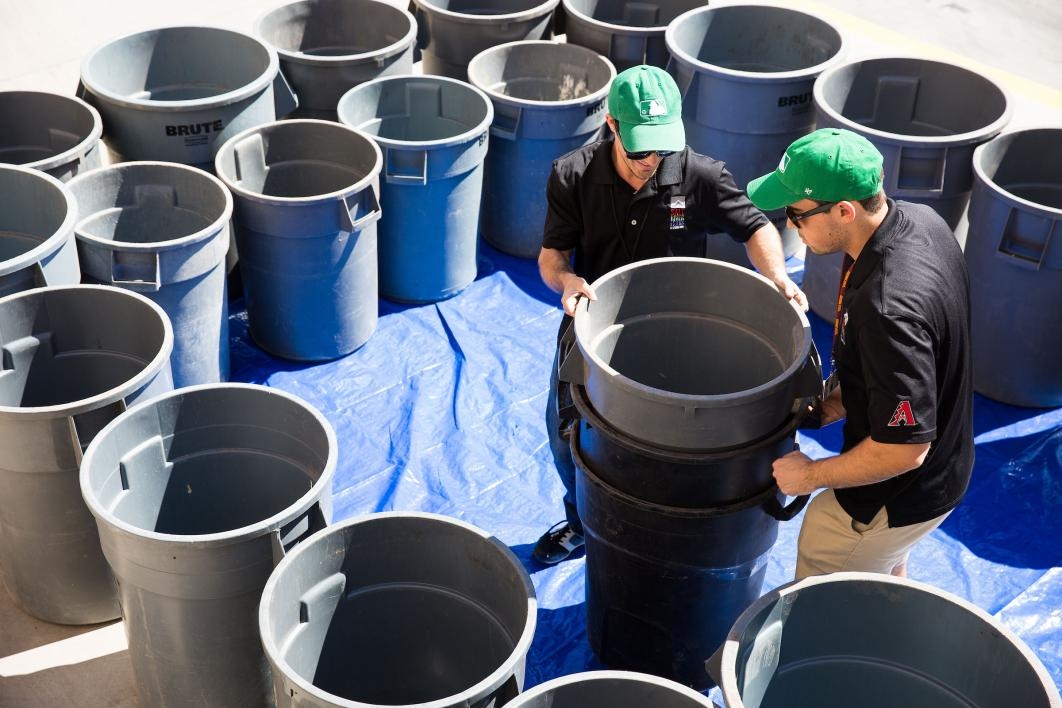 ASU students Tyler Morningstar (left) and David Salzetti, both sustainability majors, get bins ready on the loading dock at Salt River Fields at Talking Stick as part of the class parternship with the stadium on a zero-waste initiative. Students from the course are attending every spring-training game to interact with fans about recycling. On March 14, they did a waste audit with the bins. 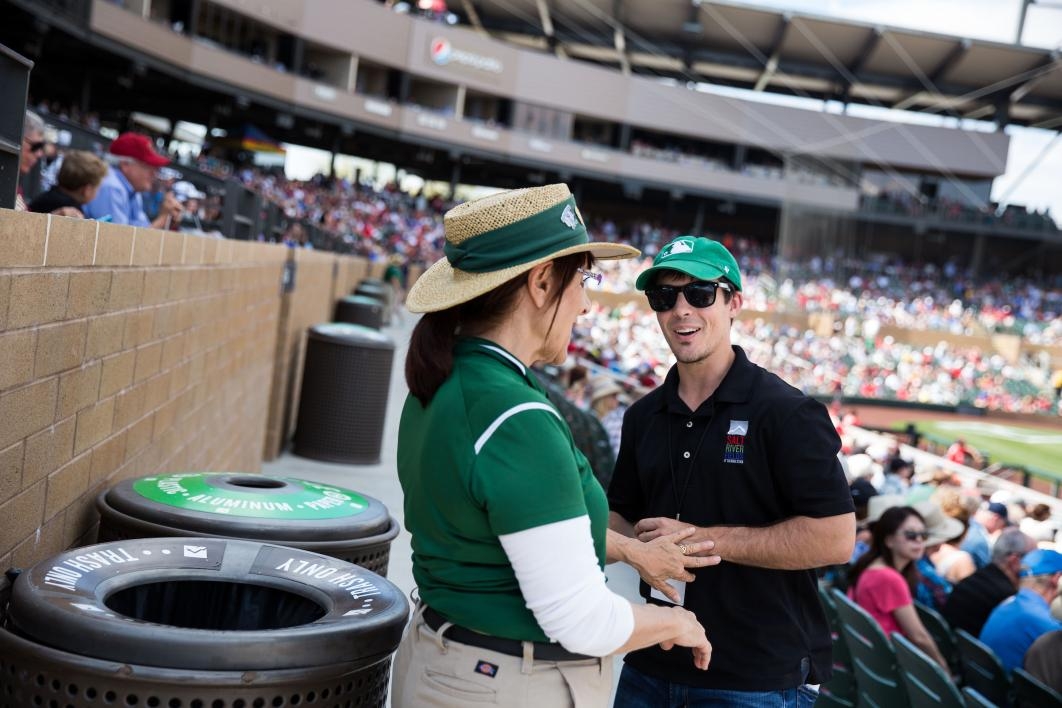 Sustainability senior Tyler Morningstar (right) chats with guest services attendants to make sure they're prepared for the eighth-inning "Recycle Rally" at Salt River Fields at Talking Stick. Working with fans and employees who may not be enthusiastic about recycling is a major part of the zero-waste project for the students. 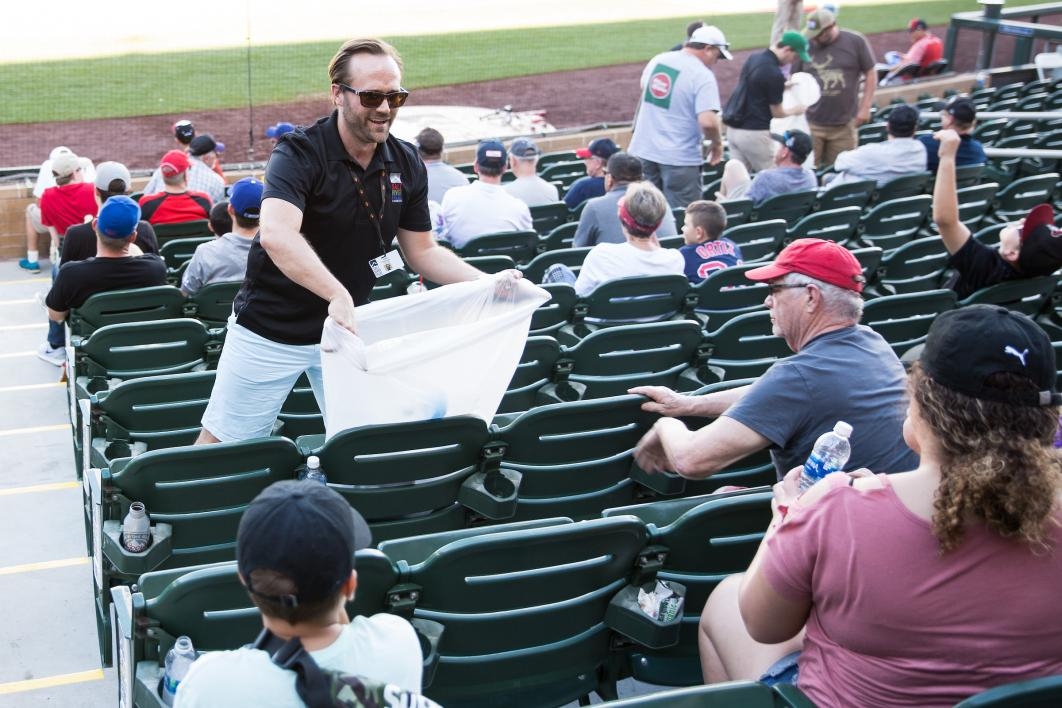 Colin Tetreault, who's teaching the zero-waste project class in the School of Sustainability at ASU, pitches in during the Recycle Rally at the spring-training game at Salt River Fields at Talking Stick. Tetreault was chairman of the NCAA Final Four sustainability initiative when the event was held in Glendale last year. 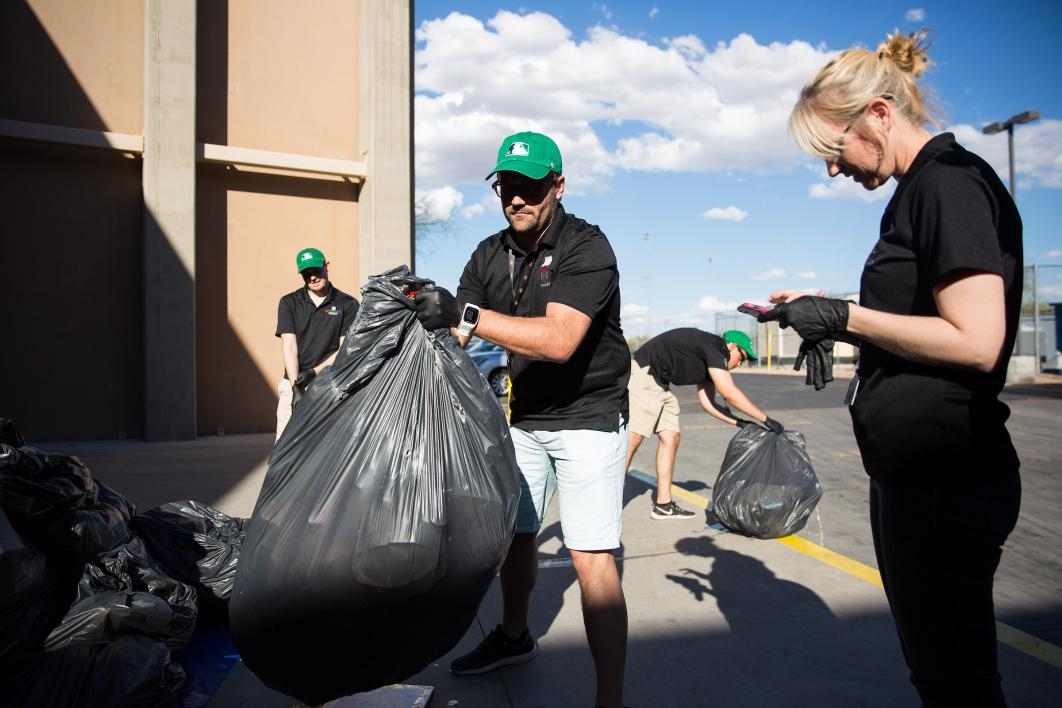 ASU faculty associates Colin Tetreault (left) and Kristen Osgood weigh the bags of garbage and recycling on the loading dock after the spring training game on March 14 in preparation for the waste audit. 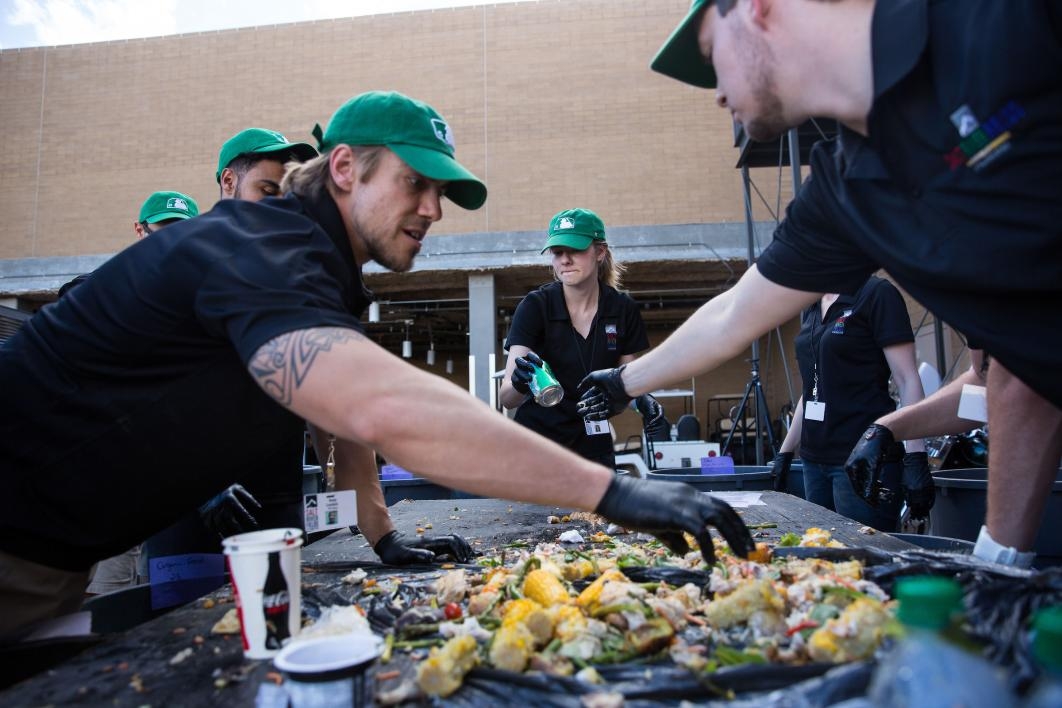 ASU sustainability students hand-sort waste and recycling items after a spring training game at Salt River Fields at Talking Stick as part of a zero-waste initiative. The students will analyze the data to come up with a best-practices plan for MLB and the stadium. 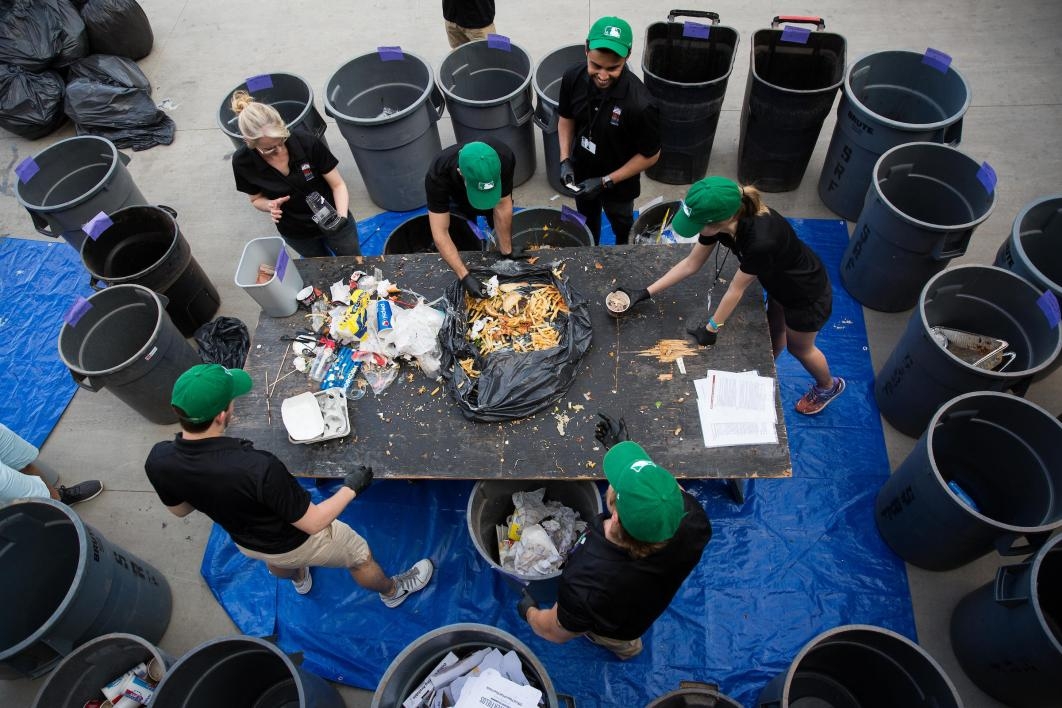 The students sorted the items into 25 categories, including food waste, compostable paper, aluminum, different types of plastic and disposable diapers.

“In our classes, we learn about social behaviors and social change, which is a big part of sustainability. The whole idea of collective action is the only way to make it work,” he said.

“It’s interesting to meet the people who just don’t want to do it. They didn’t grow up doing it and they won’t do it. Those are the people we’re probably more interested in.”

The class hopes that when the project is over, MLB will be interested in scaling the initiative to all 10 Cactus League venues and possibly even wider, Tetreault said, adding that younger people are starting to demand social action from brands.

“If you think a team is bad to the environment, you won’t support it, but if the team does more, it will add affection and you’re more likely to buy tickets and merchandise. It’s good business,” he said.

On Wednesday, the class took the project into the next phase — strategic waste audit. Basically, garbage picking.

After the game, they took dozens of bags of garbage and recycling out to the loading dock, dumped them onto a table and hand sorted the smelly contents into 25 bins for different types of waste — including organic (food), compostable paper (hot dog trays), non-ferrous metal (aluminum cans), PET plastic (water bottles), Styrofoam, plasticized paper (coffee cups), foil (yogurt lids) and even disposable diapers.

They’ll repeat the waste audit one more time and then analyze the data — how many recyclables were thrown in the trash and the most common items that were tossed. The results will go into the final report.

Salt River Fields is already focused on being sustainable, but the students might suggest that signs near the recycling bins include photographs of items sold by the vendors, according to Kristen Osgood, an alumna of the School of Sustainability and a logistics expert on recycling. She works as a regenerative strategy manager for Stern Produce and is a faculty associate for the spring-training class.

“That way, people can match what’s in their hand to the right bin,” Osgood said.

Senior Tyler Morningstar, who’s in the spring-training class, has been to most of the games and also has an internship with the stadium this semester. He’s been involved with outreach for the project, doing interviews and appearing on the giant scoreboard to talk about the Recycle Rally.

“Informing people has been one of the most important parts of the process,” he said. “A lot of people want to recycle but they get confused along the way.

“A lot of the fans think if they have liquid left in their plastic cups or bottles, it needs to go into the trash, but we tell them it’s OK to go into the recycling because it’ll get processed out later on.”

The project is complex and will require a lot of analysis and research before the class hands in its report, but spending time at the baseball games has been nice, Tetreault said.

“But, much like the players, the students are here to work.”

Top photo: The Arizona Diamondbacks play a spring-training game against the Cincinnati Reds at Salt River Fields at Talking Stick on March 14. The Diamondbacks beat the Reds, 7-3. The stadium is already focused on sustainability, but the ASU students hope their project allows it to be more efficient. Photo by Deanna Dent/ASU Now

Arizona State University is among the top 16 percent in the world for graduate employability — ahead of such universities as Pennsylvania State, Georgetown, Ohio State and Michigan State — according to an international survey of 500 higher education institutions.The survey of “world’s best universities,” released by QS World University Rankings, measures five key indicators of a universi... 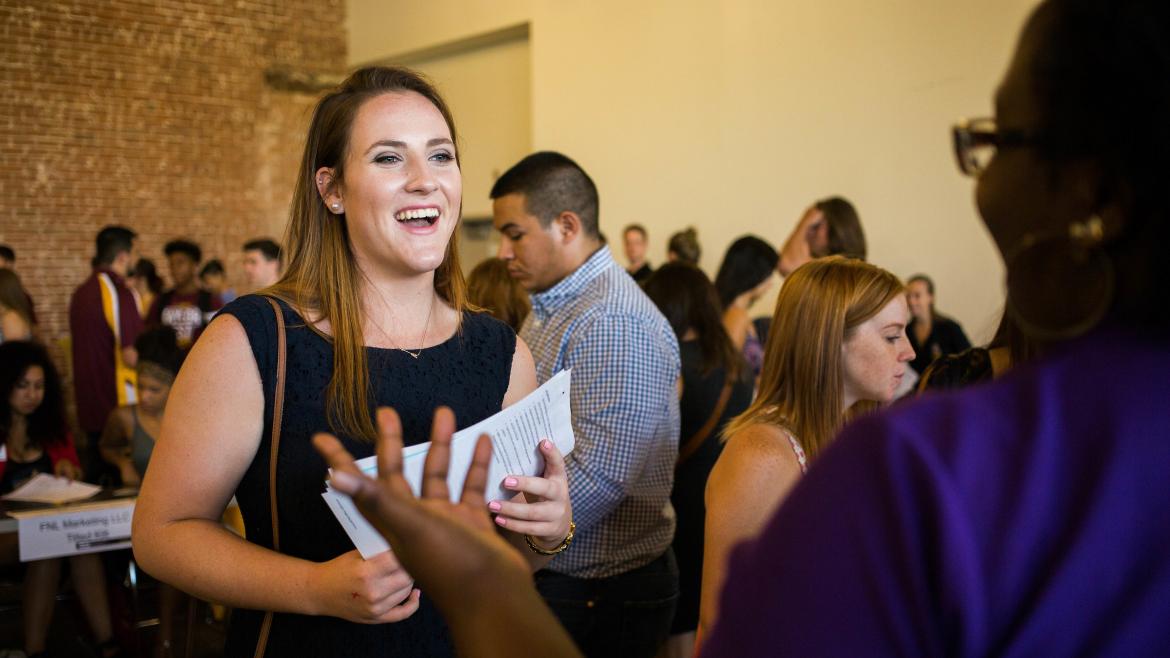 Arizona State University is among the top 16 percent in the world for graduate employability — ahead of such universities as Pennsylvania State, Georgetown, Ohio State and Michigan State — according to an international survey of 500 higher education institutions.

The survey of “world’s best universities,” released by QS World University Rankings, measures five key indicators of a university’s success in “producing the world’s most employable graduates, fostering industry connections between employers and students.” The indicators include employer reputation, alumni outcomes, partnerships with employers, employer-student connections and graduate employment rate. The comparison of employability outcomes achieved by higher education institutions is based on feedback by 30,000 employers and an evaluation of more than 200,000 work-placement partnerships.

“Working with private and public partners in the community, across the country and around the world, ASU has become a recognized leader in successfully preparing our students to enter meaningful careers,” said Grace O’Sullivan, ASU assistant vice president of corporate engagement and strategic partnerships. “Our students are prepared to bring innovation and decision-making skills to the marketplace during a time of rapid social, economic and technological change. Employers partner with the university to ensure the right set of skills is being taught in the classroom and they can trust that ASU is capable of producing top talent because they’ve been along for the ride from the outset.”

Among ASU highlights in the international survey, the university scored 99.9 percent out of 100 in student-employer connections, second among international universities to China’s Huazhong University of Science and Technology. The score is a comparative measurement of employers actively present at a university, “increasing the opportunities that students have to participate in career-launching internships and research opportunities.”

The most recent ranking by QS follows similarly prestigious recognition of ASU for graduate employability. More than 50 of America’s major corporations have elevated ASU to an elite designation in recruiting graduates; successful ASU research, educational and entrepreneurial partnerships with internet pioneers like Google, Yelp and GoDaddy; financial powerhouses, including Vanguard and Charles Schwab; State Farm and Geico among insurance leaders; tech giants such as Intel, Avnet, Dell and HP; health care research partners Mayo Clinic, Barrow Neurological Institute and Honor Health; are among those who are increasing their pipelines to talent at ASU.

“ASU’s national and international rankings, graduation rates and research enterprise have been rising for more than a decade,” she said. “The companies and organizations shaping the future economy have noticed our success and the success of our students.”

Top photo: Freshman Natalie Parker, majoring in sports journalism, listens to a representative from the Girls Scouts about job opportunities at the Downtown Campus Career Fair hosted by ASU Career Services at the A.E. England Building on the Downtown Campus in Phoenix Aug. 19, 2015. Photo by Deanna Dent/ASU News