Dusting for fingerprints of the first stars in the universe

Then, for the next 50 million-100 million years, gravity slowly pulled the densest regions of gas together until they collapsed in some places to form the first stars.

What were those first stars like and when did they form? How did they affect the rest of the universe? These are questions astronomers and astrophysicists have long pondered.

Now, after 12 years of experimental effort, a team of scientists, led by Arizona State University School of Earth and Space Exploration astronomer Judd Bowman, has detected indications of the earliest stars in the universe. Using radio signals, the detection provides the first evidence for the oldest ancestors in our cosmic family tree, born a mere 180 million years after the universe began.

To find these fingerprints, Bowman’s team used a ground-based instrument called a radio spectrometer, located at the Australian national science agency's (CSIRO) Murchison Radio-astronomy Observatory (MRO) in Western Australia. Through their Experiment to Detect the Global EoR Signature (EDGES), the team measured the average radio spectrum of all the astronomical signals received across most of the Southern Hemisphere sky and looked for small changes in power as a function of wavelength (or frequency).

As radio waves enter the ground-based antenna, they are amplified by a receiver, and then digitized and recorded by computer, similar to how FM radio and TV receivers work. The difference is that the instrument is very precisely calibrated and designed to perform as uniformly as possible across many radio wavelengths.

The signals detected by the radio spectrometer in this study came from primordial hydrogen gas that filled the young universe and existed between all the stars and galaxies. These signals hold a wealth of information that opens a new window on how early stars — and later, black holes and galaxies — formed and evolved.

“It is unlikely that we’ll be able to see any earlier into the history of stars in our lifetimes,” said Bowman. “This project shows that a promising new technique can work and has paved the way for decades of new astrophysical discoveries.”

This detection highlights the exceptional radio quietness of the MRO, particularly as the feature found by EDGES overlaps the frequency range used by FM radio stations. Australian national legislation limits the use of radio transmitters within 161.5 miles (260 km) of the site, substantially reducing interference that could otherwise drown out sensitive astronomy observations. This updated timeline of the universe reflects the recent discovery that the first stars emerged by 180 million years after the Big Bang. 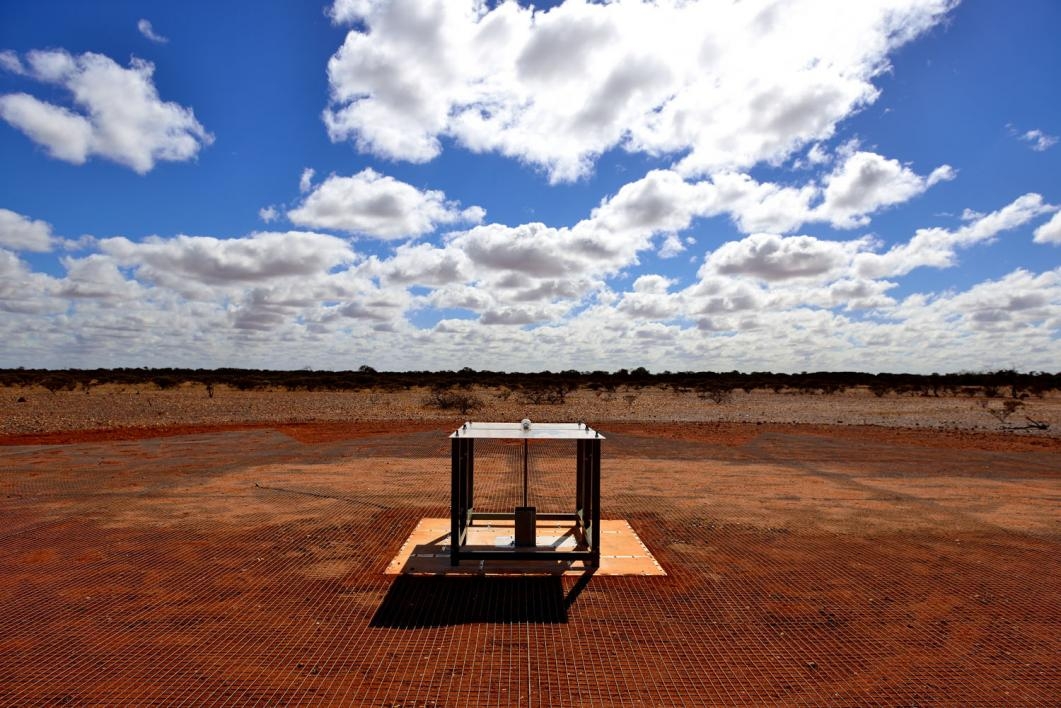 The EDGES detection required the radio quietness at the Murchison Radio-astronomy Observatory, as Australian national legislation limits the use of radio transmitters near the site. This discovery sets the stage for follow-up observations with other powerful low-frequency facilities, including HERA and the forthcoming SKA-low.

The results of this study have been recently published in Nature by Bowman, with co-authors Alan Rogers of the Massachusetts Institute of Technology’s Haystack Observatory, Raul Monsalve of the University of Colorado, and Thomas Mozdzen and Nivedita Mahesh also of ASU’s School of Earth and Space Exploration.

The results confirm the general theoretical expectations of when the first stars formed and the most basic properties of early stars.

“What’s happening in this period is that some of the radiation from the very first stars is starting to allow hydrogen to be seen," said Rogers. "It’s causing hydrogen to start absorbing the background radiation, so you start seeing it in silhouette, at particular radio frequencies. This is the first real signal that stars are starting to form, and starting to affect the medium around them.”

The team originally tuned their instrument to look later in cosmic time, but in 2015 decided to extend their search.

“As soon as we switched our system to this lower range, we started seeing things that we felt might be a real signature,” Rogers said. “We see this dip most strongly at about 78 megahertz, and that frequency corresponds to roughly 180 million years after the Big Bang. In terms of a direct detection of a signal from the hydrogen gas itself, this has got to be the earliest.”

The study also revealed that gas in the universe was probably much colder than expected — less than half the expected temperature. This suggests that either astrophysicists’ theoretical efforts have overlooked something significant or that this may be the first evidence of non-standard physics: Specifically, that baryons (normal matter) may have interacted with dark matter and slowly lost energy to dark matter in the early universe, a concept that was originally proposed by Rennan Barkana of Tel Aviv University.

“If Barkana’s idea is confirmed, then we've learned something new and fundamental about the mysterious dark matter that makes up 85 percent of the matter in the universe, providing the first glimpse of physics beyond the standard model,” said Bowman.

The next steps in this line of research are for another instrument to confirm this team’s detection and to keep improving the performance of the instruments, so that more can be learned about the properties of early stars.

“We worked very hard over the last two years to validate the detection, but having another group confirm it independently is a critical part of the scientific process,” said Bowman.

Bowman would also like to see an acceleration of efforts to bring on new radio telescopes like the Hydrogen Epoch of Reionization Array (HERA) and the Owens Valley Long Wavelength Array (OVRO-LWA).

“Now that we know this signal exists, we need to rapidly bring online new radio telescopes that will be able to mine the signal much more deeply,” he said.

The antennas and portions of the receiver used in this experiment were designed and constructed by Rogers and the MIT Haystack Observatory team. The ASU team and Monsalve added the automated antenna reflection measurement system to the receiver, outfitted the control hut with the electronics, constructed the ground plane and conducted the field work for the project. The current version of EDGES is the result of years of design iteration and ongoing detailed technical refinement of the calibration instrumentation to reach the levels of precision necessary for successfully achieving this difficult measurement.

The MRO is managed by CSIRO, Australia’s national science agency, as a world-class site for global radio astronomy projects. In addition to the EDGES experiment, it hosts CSIRO’s Australian SKA Pathfinder telescope and the MWA telescope and is the site for the future SKA-low telescope. CSIRO acknowledges the Wajarri Yamatji people as the traditional owners of the observatory site.

More than 2,600 people walked the halls of Arizona State University’s Biodesign Institute on Saturday during the annual ASU Open Door event. Kids of all ages and their families enjoyed nearly 40 science exhibits and activities organized by 16 research centers at Biodesign.Guests had the chance to take a selfie and watch their face evolve with computer software, put on a spacesuit and do a microb...

More than 2,600 people walked the halls of Arizona State University’s Biodesign Institute on Saturday during the annual ASU Open Door event. Kids of all ages and their families enjoyed nearly 40 science exhibits and activities organized by 16 research centers at Biodesign.

Guests had the chance to take a selfie and watch their face evolve with computer software, put on a spacesuit and do a microbiology experiment on the International Space Station, see how treatments to fight Ebola are made in plants and more. 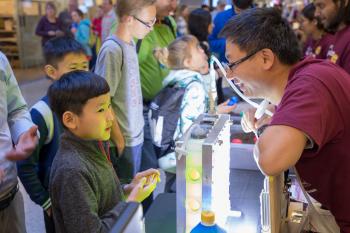 Open Door is a special opportunity for the public to interact with Biodesign scientists and explore the Biodesign buildings. Photo by Ben Petersen Download Full Image

It was an exciting opportunity for Biodesign researchers to share their science with the community and inspire kids to pursue STEM careers. Open Door is Arizona State University's annual open house and Biodesign’s largest outreach event. Planning for this year’s showcase began last year, and 340 volunteers helped to engage visitors.

“It takes many hard-working team members to host Open Door here because we have a wide breadth of research happening here,” said Julie Kurth, manager of Biodesign marketing and communications and chair of this year’s planning committee. “Sharing our love of science with these curious visitors helps to prepare a new generation to take over from us and builds the community support we need to make innovations that can better our world.”

Scientists lined the open atrium of the interconnected Biodesign buildings stretching the length of nearly two football fields. Faculty and student volunteers wore custom stickers indicating their occupation. Visitors got to meet different kinds of biologists, chemists, engineers and even an FBI agent. 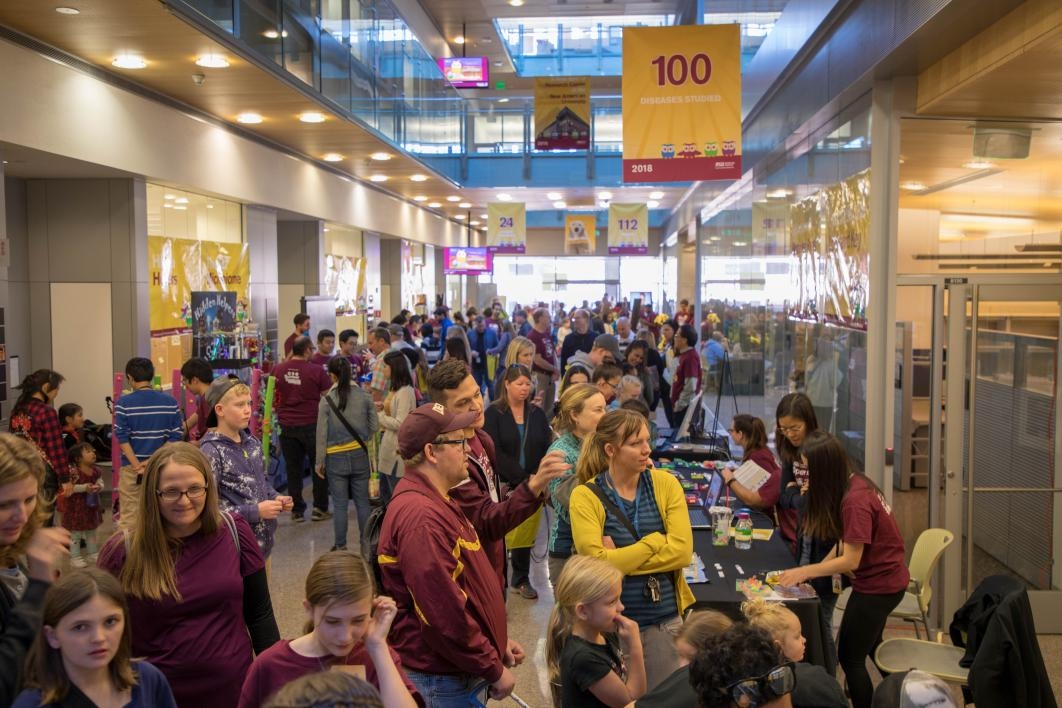 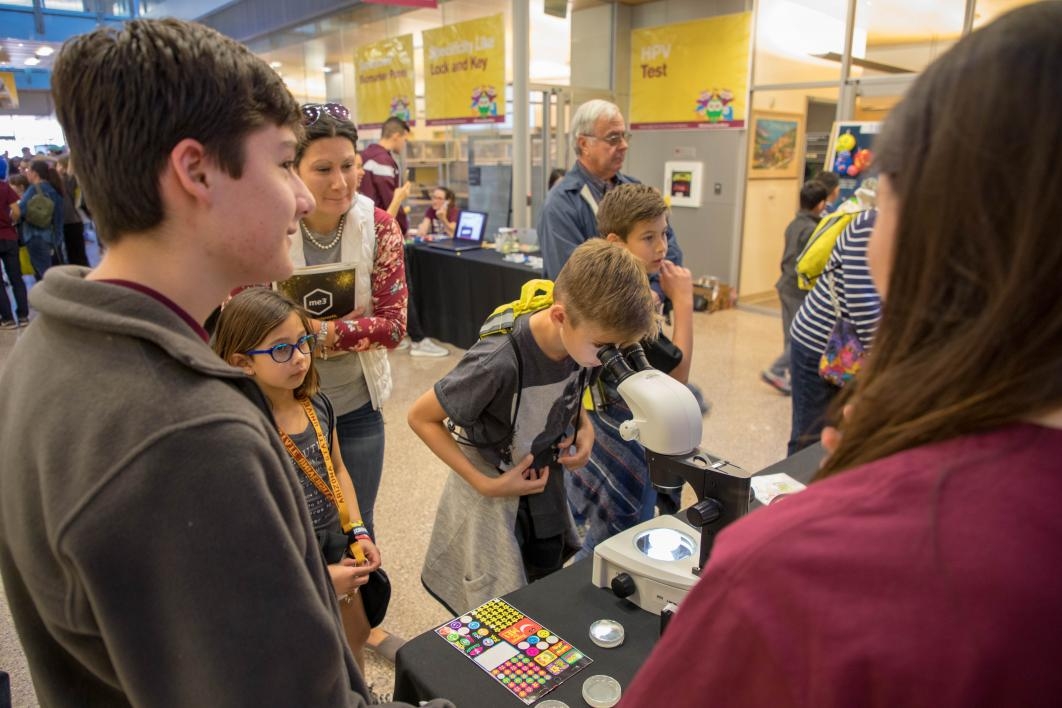 Students from around Phoenix had a chance to try out lab equipment. 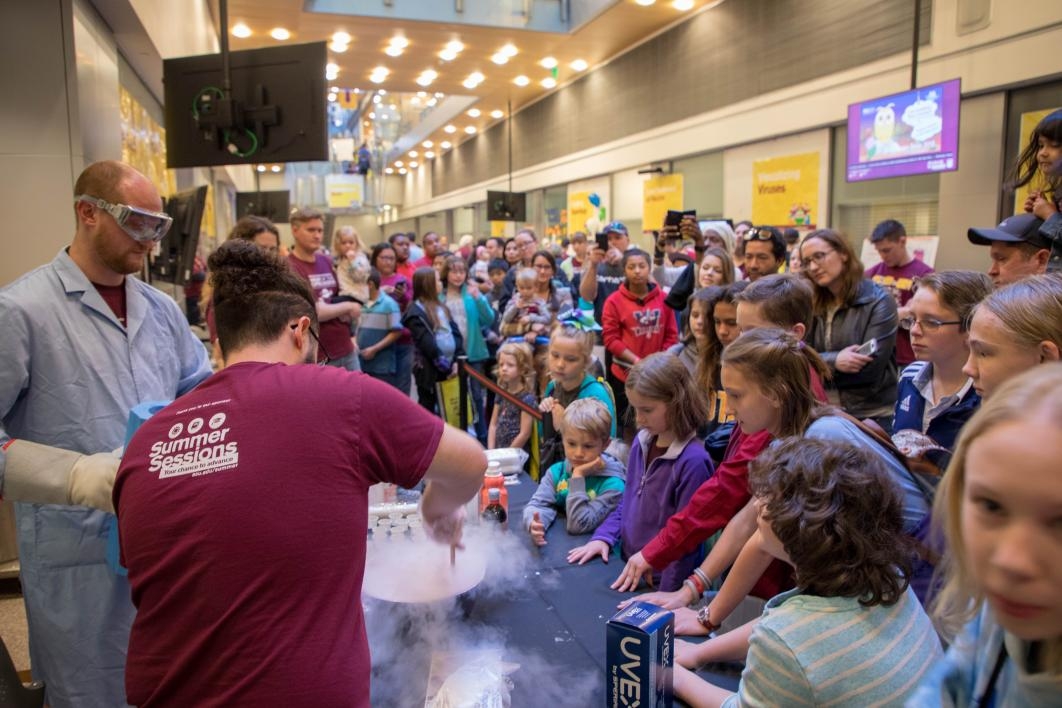 Eating ice cream made using liquid nitrogen was a big hit with the students. 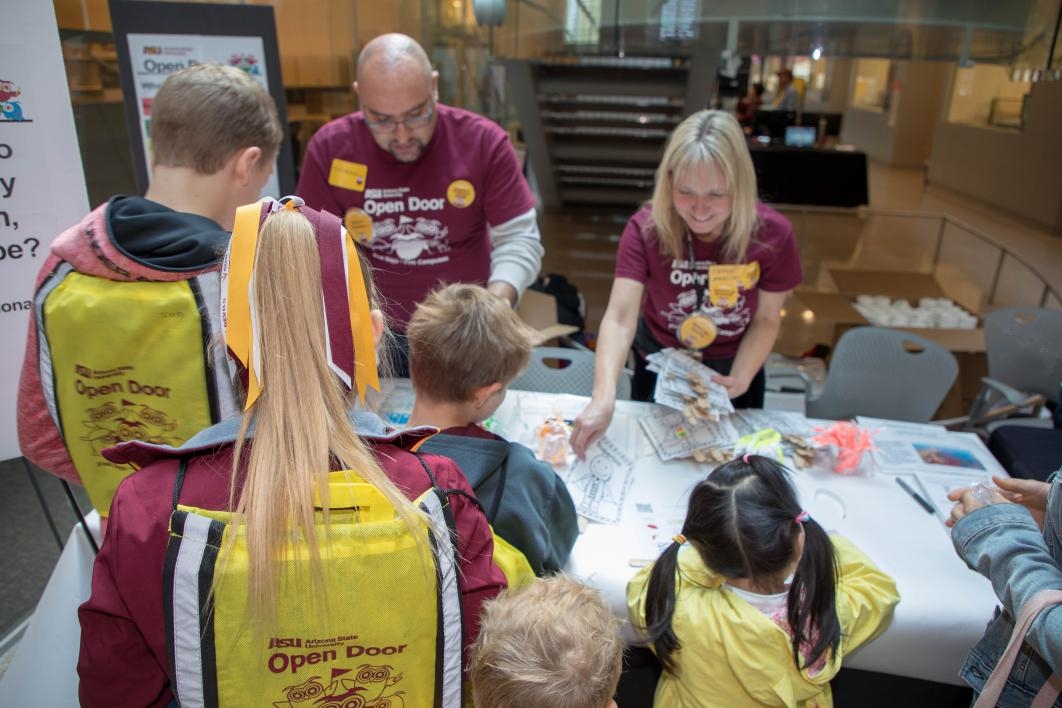 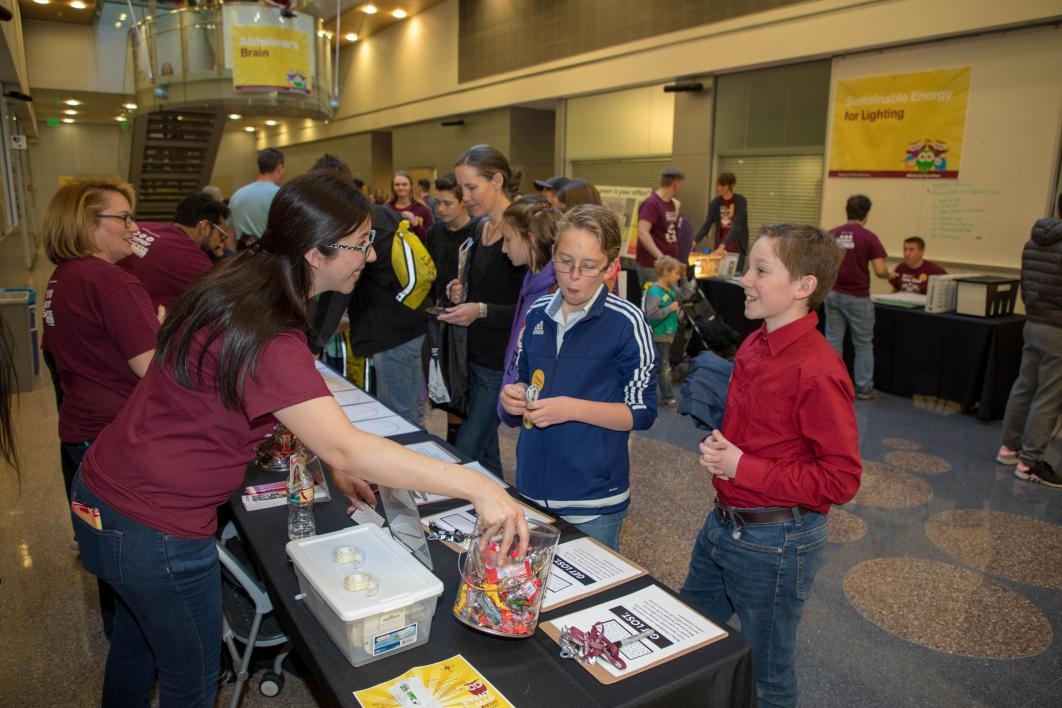 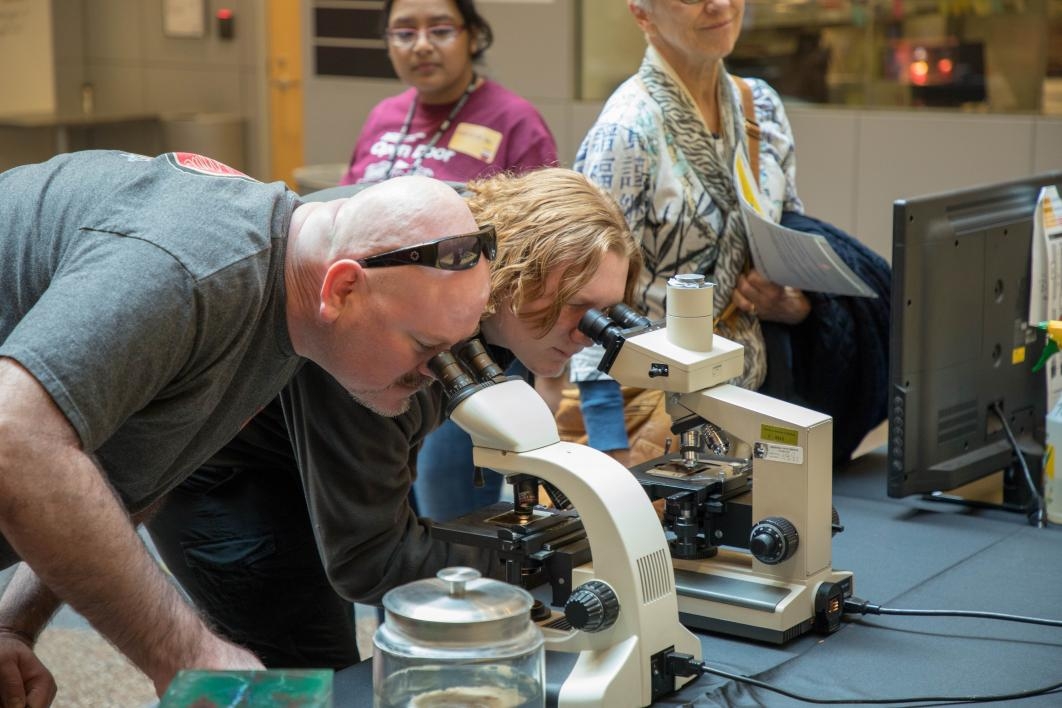 Laboratory equipment, from microscopes to gene guns, was on display. 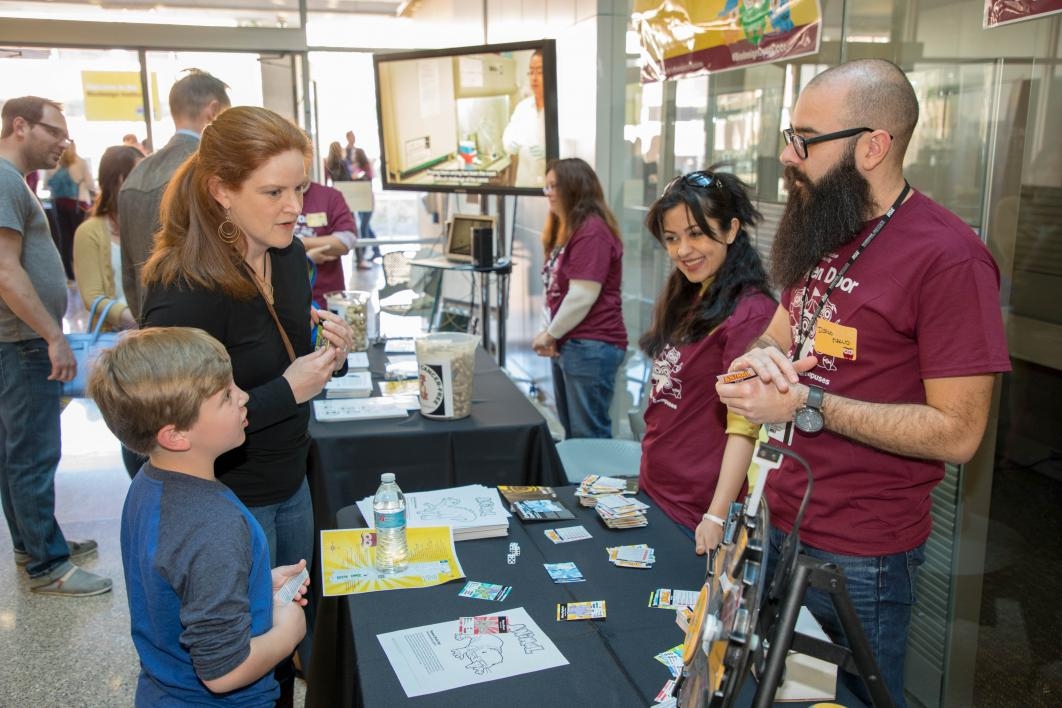 Activities and exhibits lined the open atrium of the Biodesign Institute. 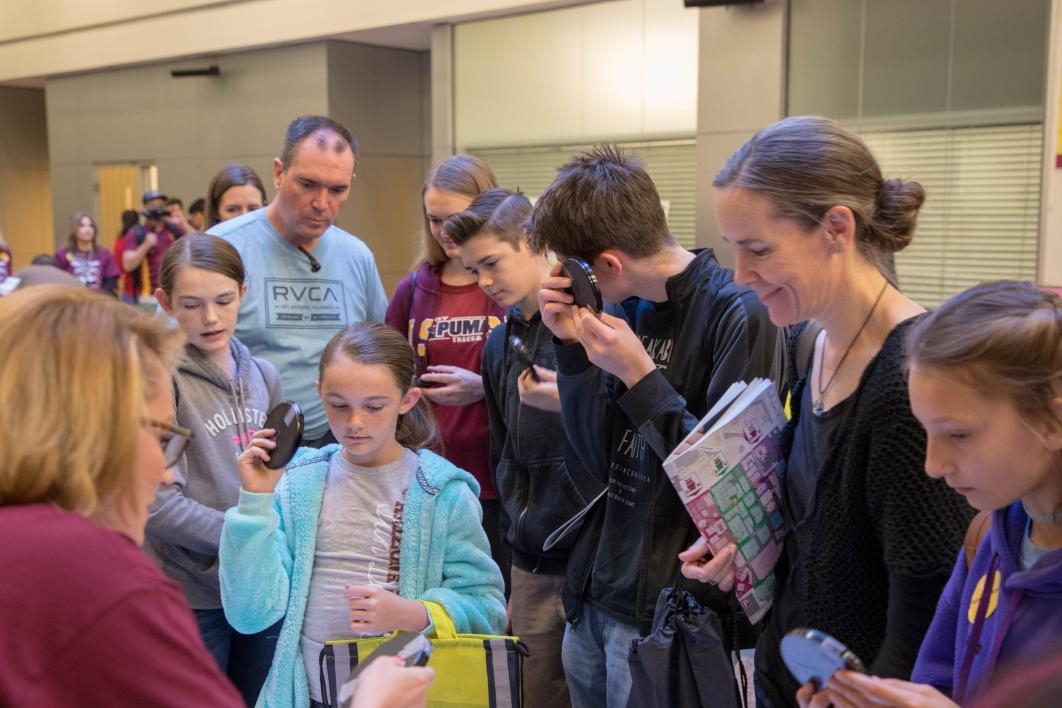 This was the seventh year of Open Door at ASU and Biodesign.

Esther Cheng, an undergraduate researcher at the Biodesign Center for Immunotherapy, Vaccines and Virotherapy, volunteered at the event.

“What I like about Open Door is that we’re able to be open and express our joy and passion for research to the community,” Cheng said. “I think it’s great to raise awareness and support for what we do.”

Brenda Hogue said she loves hosting Open Door every year. Hogue is a professor at both the Biodesign Center for Applied Structural Discovery and the Center for Immunotherapy, Vaccines and Virotherapy.

“It’s such a great outreach for the scientific community,” Hogue said. “It’s fun to see kids get excited about the science. I even had one little kid in fifth grade, and he wanted to know if he could work in my lab.”

Biodesign’s Marco Mangone, an assistant professor at the Virginia G. Piper Center for Personalized Diagnostics, showed off some of his lab equipment.

“Our booth is trying to hook up kids with genetics and show them the power of genetics,” he said. “We show them mutants in the microscope, and kids are really excited about looking for mutants and worms that change color and shape during development.”

Open Door began in 2012 as a collaboration between the Biodesign Institute, the College of Liberal Arts and Sciences and the Ira A. Fulton Schools of Engineering. Today, Open Door is the university’s signature outreach event, giving the public a behind-the-scenes look at what makes ASU No. 1 in the U.S. for innovation.

“I just love the kids’ enthusiasm for the science we show them. I want to inspire these kids to be the next generation of scientists,” said volunteer Collin Jugler, a PhD student in Molecular and Cellular Biology at ASU and a researcher at Biodesign.