Can we stay young forever, or even recapture lost youth?

Research from the laboratory of Professor Julian Chen in the School of Molecular Sciences at Arizona State University recently uncovered a crucial step in the telomerase enzyme catalytic cycle. This catalytic cycle determines the ability of the human telomerase enzyme to synthesize DNA “repeats” (specific DNA segments of six nucleotides) onto chromosome ends, and so afford immortality in cells. Understanding the underlying mechanism of telomerase action offers new avenues toward effective anti-aging therapeutics. 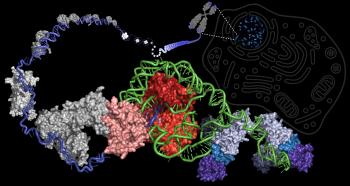 This figure depicts the enzyme telomerase as well as telomeres relative to a chromosome. Download Full Image

Typical human cells are mortal and cannot forever renew themselves. As demonstrated by Leonard Hayflick a half-century ago, human cells have a limited replicative lifespan, with older cells reaching this limit sooner than younger cells. This "Hayflick limit" of cellular lifespan is directly related to the number of unique DNA repeats found at the ends of the genetic material-bearing chromosomes. These DNA repeats are part of the protective capping structures, termed "telomeres," which safeguard the ends of chromosomes from unwanted and unwarranted DNA rearrangements that destabilize the genome.

Each time the cell divides, the telomeric DNA shrinks and will eventually fail to secure the chromosome ends. This continuous reduction of telomere length functions as a "molecular clock" that counts down to the end of cell growth. The diminished ability for cells to grow is strongly associated with the aging process, with the reduced cell population directly contributing to weakness, illness, and organ failure.

The fountain of youth at molecular level

Counteracting the telomere shrinking process is the enzyme, telomerase, that uniquely holds the key to delaying or even reversing the cellular aging process. Telomerase offsets cellular aging by lengthening the telomeres, adding back lost DNA repeats to add time onto the molecular clock countdown, effectively extending the lifespan of the cell. Telomerase lengthens telomeres by repeatedly synthesizing very short DNA repeats of six nucleotides — the building blocks of DNA — with the sequence "GGTTAG" onto the chromosome ends from an RNA template located within the enzyme itself. However, the activity of the telomerase enzyme is insufficient to completely restore the lost telomeric DNA repeats, nor to stop cellular aging.

The gradual shrinking of telomeres negatively affects the replicative capacity of human adult stem cells, the cells that restore damaged tissues and/or replenish aging organs in our bodies. The activity of telomerase in adult stem cells merely slows down the countdown of the molecular clock and does not completely immortalize these cells. Therefore, adult stem cells become exhausted in aged individuals due to telomere length shortening that results in increased healing times and organ tissue degradation from inadequate cell populations.

Tapping the full potential of telomerase

Understanding the regulation and limitation of the telomerase enzyme holds the promise of reversing telomere shortening and cellular aging with the potential to extend human lifespan and improve the health and wellness of elderly individuals. Research from the laboratory of Chen and his colleagues, Yinnan Chen, Joshua Podlevsky and Dhenugen Logeswaran, recently uncovered a crucial step in the telomerase catalytic cycle that limits the ability of telomerase to synthesize telomeric DNA repeats onto chromosome ends.

An animation for the telomerase enzyme reaction cycle.

"Telomerase has a built-in braking system to ensure precise synthesis of correct telomeric DNA repeats. This safe-guarding brake, however, also limits the overall activity of the telomerase enzyme," said Professor Chen. "Finding a way to properly release the brakes on the telomerase enzyme has the potential to restore the lost telomere length of adult stem cells and to even reverse cellular aging itself."

This intrinsic brake of telomerase refers to a pause signal, encoded within the RNA template of telomerase itself, for the enzyme to stop DNA synthesis at the end of the sequence ‘GGTTAG’. When telomerase restarts DNA synthesis for the next DNA repeat, this pause signal is still active and limits DNA synthesis. Moreover, the revelation of the braking system finally solves the decades-old mystery of why a single, specific nucleotide stimulates telomerase activity. By specifically targeting the pause signal that prevents restarting DNA repeat synthesis, telomerase enzymatic function can be supercharged to better stave off telomere length reduction, with the potential to rejuvenate aging human adult stem cells.

Human diseases that include dyskeratosis congenita, aplastic anemia, and idiopathic pulmonary fibrosis have been genetically linked to mutations that negatively affect telomerase activity and/or accelerate the loss of telomere length. This accelerated telomere shortening closely resembles premature aging with increased organ deterioration and a shortened patient lifespan from critically insufficient cell populations. Increasing telomerase activity is the seemingly most promising means of treating these diseases.

While increased telomerase activity could bring youth to aging cells and cure premature aging-like diseases, too much of a good thing can be damaging for the individual. Just as youthful stem cells use telomerase to offset telomere length loss, cancer cells employ telomerase to maintain their aberrant and destructive growth. Augmenting and regulating telomerase function will have to be performed with precision, walking a narrow line between cell rejuvenation and a heightened risk for cancer development.

Some of Arizona State University's best and brightest professors are headed back to the classroom. Kind of ...On the cutting edge of an initiative to help college faculty implement essential practices shown to improve student performance, ASU has around 90 professors currently enrolled in the Association of College and University Educators' (ACUE) online course in Effective Teaching Practices. W... 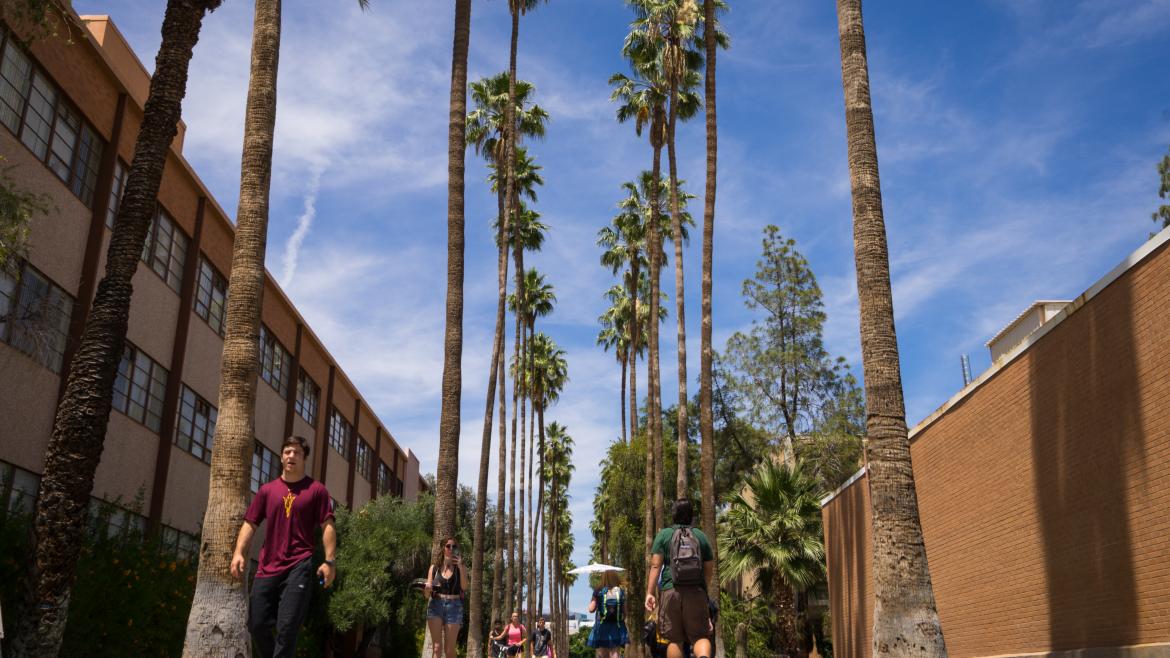 Some of Arizona State University's best and brightest professors are headed back to the classroom. Kind of ...

On the cutting edge of an initiative to help college faculty implement essential practices shown to improve student performance, ASU has around 90 professors currently enrolled in the Association of College and University Educators' (ACUE) online course in Effective Teaching Practices.

With university President Michael Crow already on board as a cosigner of the ACUE course, the decision to bring the program to faculty in eight of ASU's colleges was an easy one.

"ACUE always works with the American Council for Education and universities like ours," said Paul LePore, associate dean in the College of Liberal Arts and Sciences. "One of the challenges that schools on our scale face is preparing and providing opportunities for our faculty to reflect and refine their teaching skills. So they brought in experts from around the country and produced a 28-module course."

The 28 modules are one hour each and include over 180 instructional videos and the demonstration of dozens of effective teaching techniques.

It is modeled to be both very hands-on and easy to use, which has drawn rave reviews from those enrolled thus far. Jacqueline Martinez, an associate professor of communication, says that the model helps maximize and enhance the time she spends in her classroom.

"The active-learning approach to the course allows faculty to share and comment in real time on what is happening in their classrooms on any given day," Martinez said. "This accelerates the learning and insight gained by each professor. The course gives us space to reflect seriously on what we do in the classroom and provides an excellent array of techniques to improve the learning experience for students."

A domino effect of sorts helps improve that experience. As the students of the course work through the material, they are encouraged to collaborate with other faculty members to widen the effect they have on their learners.

"To make the workload manageable, faculty learners only need to implement one strategy each week," said Jacquelyn Lynch, a Barrett, The Honors College Dean's Fellow. "We then reflect upon its successes and challenges as we think about how might refine the activity for the future. After that, we can share those experiences with colleagues in our departments to broaden the impact of the work each of us is doing."

ASU had some of its professors participate in a trial run for the course back in December and over 90 percent of the enrollees said they found it valuable and would recommend it to their peers. Those results, combined with the positive feedback from this latest round of enrollees, has LePore confident ASU found a winner with this course.

"Our faculty are excellent teachers but they aren't necessarily trained in instruction as a part of their PhD programs," he said. "This allows us to be at the cutting edge in the way we deliver education to our students. The idea that we can partner with a group like ACUE is innovative and exciting."